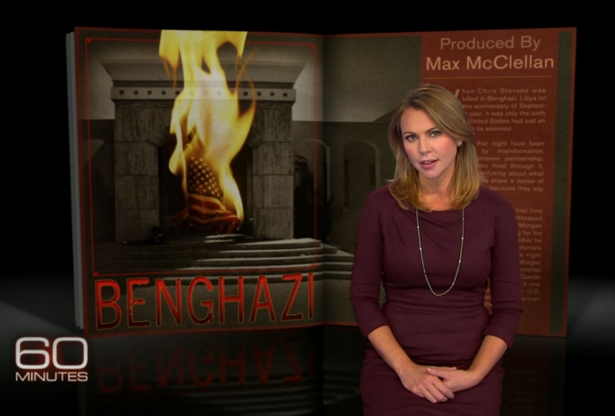 Lara Logan apologizes for the faulty 60 Minutes report on the Benghazi incident. (Courtesy of CBS.)

Alas, the coverage I had planned of the 2014 New Orleans Jazz and Heritage festival will be a few days late and a few dollars short owing to an unhappy confluence of events. First, I expected to rely on my excellent nephew, Adam Franklin, to cover the first weekend, but Adam’s grandfather passed away that same weekend and he did the right thing, so if you want to read about weekend one, I suggest David Fricke’s coverage in Rolling Stone, which is almost as good as young Adam’s would have been.

I had also planned on covering all four days of the second weekend (together with the luminous photography of The Nation’s own Charles Bittner). Nobody died but I did completely total my rental car when I missed a stop sign looking for a parking lot just outside the festival. (If you ever get in a major accident in New Orleans in a non-commercial area, you can expect to wait at least three hours for the cops to show up and take down all your information, before also handing you a summons. You can also expect everyone involved to be super nice.) So that took all day and I missed all of Thursday.

Then I hoped to have it all written up for this morning but when I woke up at 5:00 am Tuesday, (after spending an unhappy day with Delta), it was not for Zabar’s French Roast or Jon Stewart (or the Mets, depending on the season), but for an impacted kidney stone. I have never been fond of bloggers who blog from their bathrooms—Hello Andrew Sullivan—and so I will just say that a) these things hurt like Hell; b) I actually felt lucky though, because if it had happened at Jazzfest or on the way home, oy—I don’t even want to think about it, and c) the staff at St. Lukes Hospital at 120th and Amsterdam is really wonderful (though this may be the Vicodin talking). I spent thirteen hours there and came out all fixed, the write-up/photo extravaganza will have to wait until tomorrow or the next day.

After more than a dozen public hearings, nearly fifty Capitol Hill briefings, and the production of tens of thousands of pages of documents for five different overlapping Congressional committee investigations—the cost of which for the Pentagon alone has run into the millions of dollars—the American people learned this past week that they now, finally, will be able to get to the truth about the White House cover-up of Benghazi. Or, at least, that’s how it’s been predictably portrayed by the right.

Of course, Graham has famously not-minced-words before. Last fall, he loudly touted Lara Logan’s scathing 60 Minutes report about Benghazi, calling it a “death blow” to the White House’s narrative of the attack and its aftermath. Of course, that was before Logan’s whole story unraveled into a pile of tangled conflicts of interest and fabulist bravado, costing Logan both her job and her reputation. (But as we learned this week, not before she turned to Graham out of desperation to try to save her story.)

Fox News commentator Charles Krauthammer joined the over-the-top-metaphor party this past week as well. Just weeks after ruefully admitting that the “clock had run out on Benghazi,” he was back with a vengenace labeling the newly unearthed emails no less than “the equivalent of what was discovered with the Nixon tapes.” To hear a conservative invoke the biggest presidential scandal of our nation’s history in reference to this White House doesn’t exactly shock the conscience. Even less so when you learn that Republican politicians and right-wing pundits had already compared Benghazi to Watergate at least a dozen times before.

One of those making this comparison to Nixon’s malfeasance was a former adviser of Nixon’s, right-wing xenophobe Pat Buchanan. And to be fair, Buchanan had already beat Graham to the Benghazi “smoking gun” talking point by a year and half. Just days before the 2012 election, Buchanan identified an Aug. 16 State Dept. cable about security risks at the Benghazi consulate as “the smoking gun.”

Though the claim was quickly debunked, conservative columnist Jonah Goldberg, not to be out-outraged, weighed in last May. In a somewhat surprising move, he dismissed the GOP’s unbridled obsession with the Sunday morning talking points of Susan Rice. But, in keeping with his well-known reputation for understated, intellectual rigor, Goldberg went on to cite “an arsenal’s worth of smoking guns” and, as proof, vaguely recited some things one might learn after ten seconds of Googling the Benghazi attack and investigation.

For good measure, it was also around this time last year that a columnist in the Baltimore Sun lumped the Benghazi investigation together with the now-debunked IRS scandal as Obama’s “Katrina moment.” This “Obama’s Katrina” meme, if you’re counting at home, has now been slapped on nearly a dozen events by conservatives, rivaling even the Watergate allusions. The lesson being, I guess, that as far as presidential screw-ups go, recent Republican presidents really have set the standard.

The dubious track record of conservatives claiming to have found the “smoking gun” that will take down Obama even awakened Fox News’s sleepy in-house media critic, Howard Kurtz. In a column last Friday, Kurtz allowed that he didn’t think the recent White House email revelations amounted to a “smoking gun.” In addition, he obliquely acknowledged his network’s single-minded obsession with Benghazi conspiracies. And yet, he carefully avoided practicing, well, actual media criticism on whether or not his own network has in fact been engaging in outrageous, unfounded speculation:

“Critics say Fox News has relentlessly hyped the Benghazi story to turn it into a scandal. Whatever your view, that aggressive coverage has made it easier for rivals to dismiss each report as just another incremental development.”

“Whatever your view” being the new way one says: “I’d rather not get my boss mad by telling the truth, thank you very much.”

And make no mistake: the accusation that Fox News is “relentlessly hyping” Benghazi is a perfectly legitimate criticism to describe a cable news network that is now a) selectively airing only questions of the White House that involve Benghazi and b) pleading with meteorologists to confront Obama about the issue. When other news networks don’t give in to the same, 24/7 orgiastic impulses as Fox’s Bill O’Reilly complains their Benghazi coverage is “minimal.” Never mind that the daily White House press briefing last Thursday was dominated by Benghazi questions, as it was this past Monday.

That’s why a cheer no doubt erupted across the right-wing media when House Speaker John Boehner announced last Friday he will convene a new, joint select committee to investigate Benghazi all over again. Over at Fox, they did their best to excuse Boehner dragging Congress and President Obama back through the process, in laughably sympathetic, he-didn’t-have-any-choice rationalization:

“Republican leaders had hoped to avoid long hearings on Benghazi in the midst of an election cycle focused on domestic issues. But it looks like the revelations are enough to head that way.”

Left out of this explanation: that Boehner has been meticulously orchestrating the House Benghazi strategy for maximum political advantage from the get-go. As far back as a year ago, Politico was marveling over what it called Boehner’s “biggest fixation.”

Could there possibly be any other reasons Republicans in Congress and their counterparts in the conservative media might want to re-ignite their torches over Benghazi? What recent headlines—like this, perhaps?—about the Obama administration’s other purported disaster might now be backfiring on conservatives? How else might the GOP achieve the rare political trifecta of publicly bludgeoning the current Democratic resident of the White House as well as the party’s past and likely future nominees? If you want evidence of the Manichean narratives being crafted by Republicans in Congress and propelled forward by right-wing news outlets, look no further than this convenient pirouette by Fox News back to Benghazi over the past month.

Granted, the conservative outrage feedback loop is now a permanent part of the media landscape, but that’s not to say it doesn’t have a deleterious impact on so-called objective news coverage. For example, even in Politico story that accurately picks apart the latest Republican talk of a Benghazi cover-up, the Beltway media can’t help but legitimize the conservative conspiracies by indulging in its age-old, horse-race obsession: How will this affect the 2016 narrative?

“And yet in truth, if I were a Republican strategist (which I’m not), I would advise conservatives to scandalize away. I’d also advise the Koch brothers and other deep-pocketed conservatives to underwrite the [Benghazi Industrial Complex] as the messaging campaign for 2016 gets started. Not because they’re ever going to prove anything nefarious (though hey, you never know), but they may well be able to successfully if cynically exploit the soft spot in Hillary Clinton’s ambitions for the White House: her utter disgust with the Washington political game and the willingness of the media to play along.”

You’d think that, by now, the Washington press corps would have learned. That they would’ve grown tired of the embarrassment attached to enabling the right’s unending series of false narratives and inflated scandals. After all, I seem to recall another famous example of conservatives up in arms about a “smoking gun” and a “mushroom cloud,” one that turned out not to be true either, but cost that this country far more than Benghazi ever could.

For me it was a breath of fresh air to read the hard copy of your “investigation” of AJAM. I enclose an email sent to my many E-Pals, who in general are Israeli boosters from the left & right. A few have started to think positively about AJAM and web AJ English.

I fall in the left boosters of early Zionism, being 84. That did not stop me from following AJ English for many years.

Thank you for your front-page article.  Will keep up with them.

I would say that Mr. Alterman is quite successful. There is no such thing as an invented Palestinian identity, as Palestine has been in existence for longer than Judah and Israel. In fact, from a genetic background, the Palestinians are more than likely the descendants of converted Jews from long ago.

As a Jew of Ashkenazi descent myself, I bet my genetic pool is muddied by many disparate genes.

Anyway, I do agree that the Arabs do not want peace, as well as the current Israeli leadership.

Finally, only a schlemiel (or maybe a schlemazal?), would call Mr. Alterman a coward and schmeggege.

Editor’s note: To contact Eric Alterman, use this form.