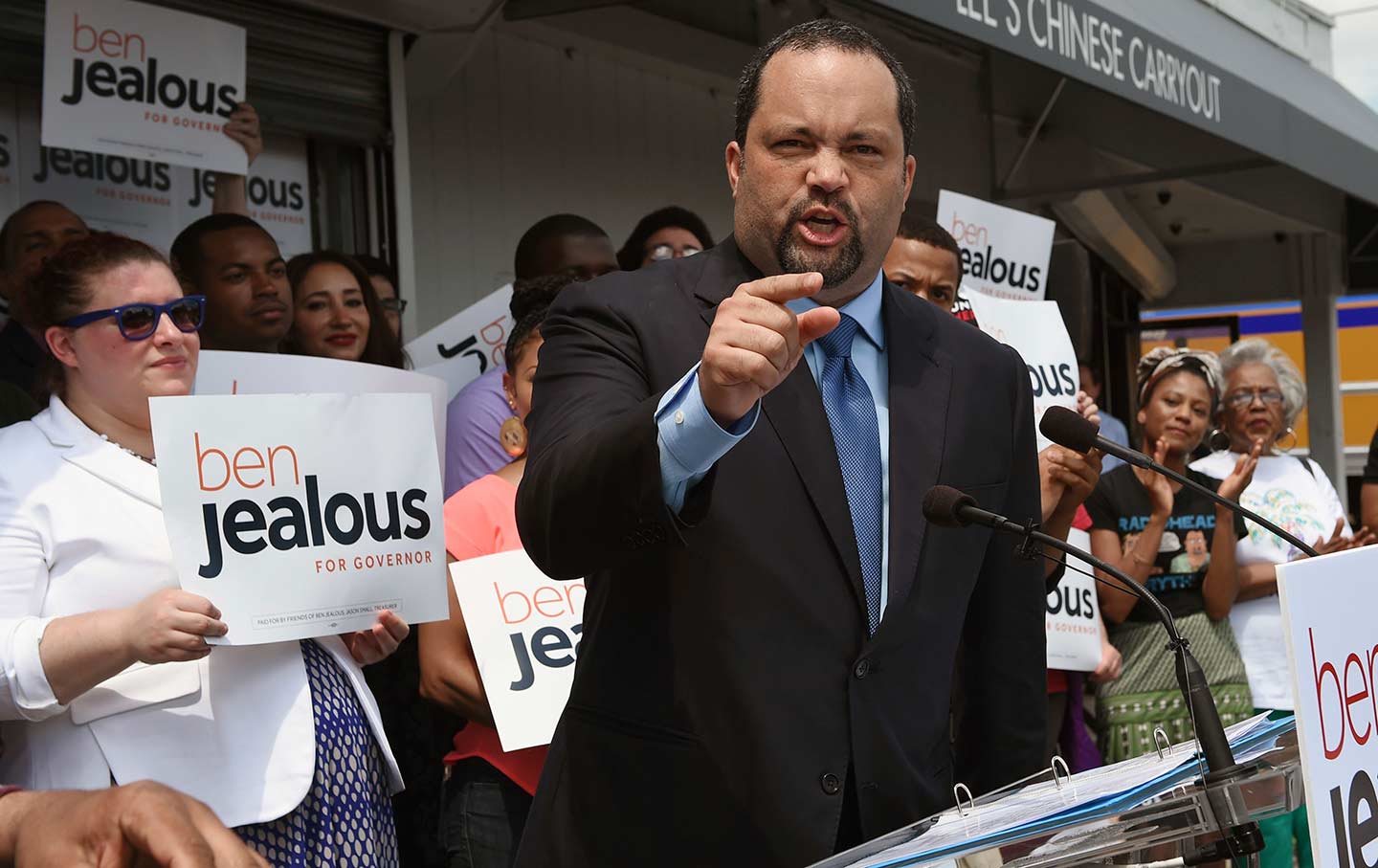 Former president and CEO of the NAACP Ben Jealous announces his bid to be the Democratic party’s nominee and challenge Republican Governor Larry Hogan. (The Baltimore Sun via AP / Kenneth K. Lam)

Former NAACP President Ben Jealous entered the race for governor of Maryland with an honest complaint and an audacious promise. In an era when Donald Trump, Jeff Sessions, and Paul Ryan are working feverishly to reverse the progress of the past century, Jealous argues that progressive states are positioned to build the framework for the progress of the coming century.

Decrying the failure of Republican Governor Larry Hogan and his statehouse allies to resist the new administration in Washington, Jealous declared in his announcement this week that “The current leadership has missed every opportunity to stand up to Donald Trump. They have let him trample over the progress our state strived to usher in. We have a rare opportunity right now and hidden inside of it, an obligation. We must bring people together across all lines, and make all forms of difference less important: whether it be race, class, region or religion.”

In that unity, argues Jealous, there is the power not just to thwart Trump and Trumpism but to shape an alternative vision for the next American politics.

Jealous faces Democratic primary competition and, if he gets the nomination, a challenging political fight with a well-financed Republican incumbent. But he enters the race with a striking résumé and an inspired agenda that is all but certain to make the Maryland contest a key measure of the national mood in 2018.

Ben Jealous: “Voting is the thread that binds the fabric of our democracy together...”

With deep roots in Maryland—his parents were Baltimore educators and civil-rights activists—Jealous speaks of uniting the state around an economic- and social-justice agenda that extends from his groundbreaking work as executive director of the National Newspaper Publishers Association (the federation of African-American community newspapers), as director of the US Human Rights Program at Amnesty International, and as the youngest president in the history of the National Association for the Advancement of Colored People. Jealous has for years earned high praise for his organizing and coalition-building skills, which he put to work as he steered the NAACP into fights for abolition of the death penalty and an end to mass incarceration, for environmental justice and marriage equality. But the Rhodes Scholar has, as well, been a visionary advocate for a bolder and more inclusive American democracy.

With the NAACP, which he led from 2008 to 2013, Jealous was ahead of the curve in recognizing the threat posed by right-wing groups such as the American Legislative Exchange Council to progress in the states. In particular, he focused on the rising tide of voter-suppression legislation, writing years ago about “the voter suppression we ignore at democracy’s peril.”

Jealous worked to address the peril not just by leading the NAACP in opposing bad legislation but by mounting a massive organizing drive to register 375,000 voters and to get 1.2 million new voters to the polls for the 2012 presidential election. And he did not stop there. In his final address as NAACP president, Jealous outlined a voting-rights agenda that he linked to the struggle for economic and social justice.

As soon as we turn 18, WE HAVE OUR RIGHT TO VOTE

Securing the right to vote for ALL OF US was THE GOAL that Harry and Harriette Moore died for…. that Medgar [Evers] was assassinated for pursuing, that Chaney, Goodman and Schwerner were executed for implementing.

This is the goal that so many in this room have risked their lives for.

Because we have ALWAYS understood that we are ultimately rendered defenseless when our access to the ballot box is diminished.

Simply put, in a democracy, our right to vote is THE right UPON WHICH our ability to defend all of our other rights is leveraged.

We have to understand what the other side knows to be true. If they can reduce our access to the polls, it will be harder for us to win any of the other fights that we may hold more dear.

Fights for education equity, for health care access…. for equality… for JUSTICE.

Voting is the thread that binds the fabric of our Democracy together—pull it hard enough and the whole thing falls apart.

With this ruling in Shelby versus Holder it has just become the MOST… IMPORTANT… FIGHT… for ALL of us.

Jealous carried that vision for an expanded and emboldened democracy forward, as an ardent supporter of the 2016 presidential bid by Vermont Senator Bernie Sanders for the Democratic presidential nomination. Recalling the Rev. Dr. Martin Luther King Jr.’s argument that “a genuine leader is not a searcher for consensus but a molder of consensus,” Jealous hailed the senator for drawing disenfranchised and disenchanted voters into the process with “the sort of freedom-­minded conviction that strikes fear in the military industrial complex, the prison industrial complex, and the worst of Wall Street.”

This combined faith in the absolute necessity of expanded voting rights and the parallel necessity of an expanded message that excites and energizes voters distinguishes Ben Jealous from most political figures in the Republican and the Democratic parties. He is willing to push harder, to go bolder. He is prepared to resist, but he is also determined to present the vision for what can and must be accomplished when the resistance prevails.