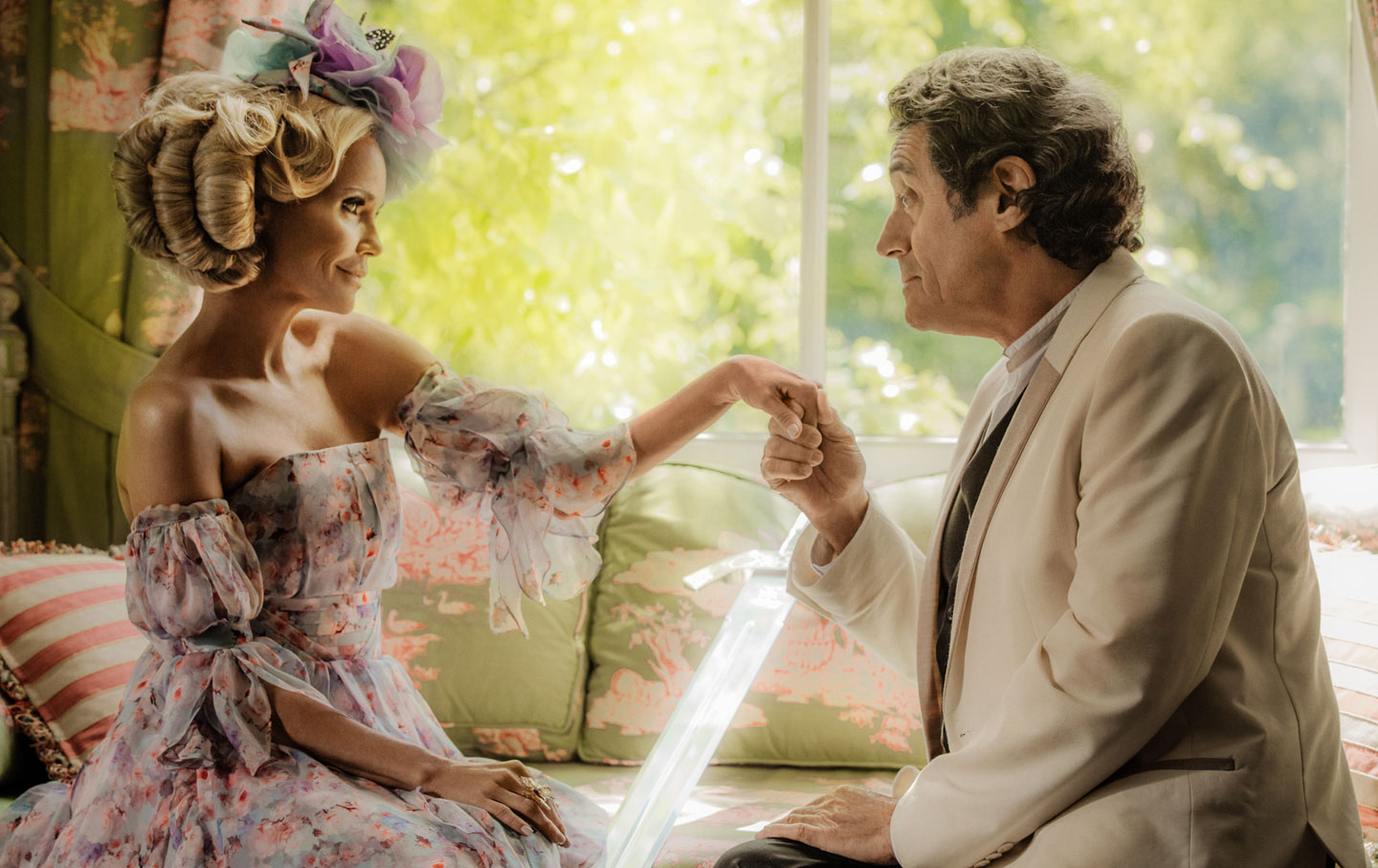 The new television show American Gods hinges on the notion that divine beings walk among us. These old deities, who were worshiped by ancient world cultures, are always there in the periphery. If humans could just attune our vision, we’d be able to see them. A more perceptive vision, though, at least when it concerns the gods, requires more than just our eyes.

In the America that the show presents, citizens give their time to new gods. One such new god, Media, played brilliantly by Gillian Anderson, sums it up when, in episode 2, she appears in the likeness of Lucille Ricardo from I Love Lucy: “The screen’s the altar, I’m the one they sacrifice to. Then to now, golden age to golden age. They sit side by side, ignore each other and give it up to me…. Time and attention, better than lamb’s blood.”

Based on Neil Gaiman’s 2001 novel of the same name, American Gods, which just finished its first season on Starz, is layered with heavy subjects and symbolism, and is hugely ambitious. It’s a story about immigration, assimilation, and the march to modernity. The show dives deeper into the novel’s source material—a suite of gods and mythical deities including Anansi the Spider, the storyteller and trickster of Ashanti folklore; Odin, the Norse god of wisdom and war; and Thoth, the ancient Egyptian scribe of the gods—by giving detail to moments and characters touched on only briefly in the book. The show’s creators, Bryan Fuller (who also made NBC’s Hannibal) and Michael Green (who wrote the latest X-Men installment, Logan), have put together a show with sensuous cinematography, full, tight shots, and bold colors, plunging the viewer even further into the world of gods and magic.

Each episode in the first season (it’s already been renewed for a second) takes on a different timely topic, spanning racism, gun control, immigration, online dating, and sexism. There hardly seems to be an issue too polarizing for American Gods to take on. Underneath all of the hot-button topics, however, there’s one question that carries the entire season: What is belief?

On Sunday’s season finale, that question reaches a climax in the form of a war between the old gods and the new gods over who will retain the attention and worshiping of fickle humans. But before that, we’re introduced to all of these deities from the perspective of one human caught in the middle: Shadow (Ricky Whittle), a stoic and understated widower who, at times, is too naive for his own good. Recently released from prison, Shadow becomes the bodyguard and accomplice to Mr. Wednesday, a con artist based on Odin, and they take to the road to enlist other old gods in the oncoming battle. In the book, Shadow is the primary character; in the show, however, he plays the more secondary role of introducing us to the various gods. At times, the ambition of American Gods leads to overwhelming exposition and introductions, pushing Shadow into the background. Additionally, Whittle sometimes struggles to standout in his role while playing alongside more veteran screen talents like Anderson and Ian McShane, who plays Mr. Wednesday.

Somewhere along the way, the new gods derail Mr. Wednesday and Shadow’s road trip by tipping off police to Shadow’s parole violations and having them arrested. The new gods offer Mr. Wednesday a deal: an upgrade in the form of a rebranding. Media, made up this time like Marilyn Monroe; the Technical Boy, a young man styled to embody the country’s obsession with technology; and their leader, the all-seeing Mr. World, who appears as if he’s a picture that can’t quite come into focus, tell Mr. Wednesday they want to help him evolve, to influence opinions and beliefs. “We want to help you find your audience,” Media says in her breathy faux-Monroe voice. Wednesday likens the offer to a grain of sand in an oyster, trying to create something shiny out of what is merely an irritant. “You say merger,” says Wednesday, “I hear exile. … All you do is occupy [humans’] time. We gave back; we gave them meaning.” But for the new gods, belief means little more than who has the best marketing strategy.

It turns out that the new gods have been offering this deal to several of the old gods. Vulcan, a Roman god of fire, had already taken the deal, and he’s thereby become the god whom America’s gun enthusiasts worship. Each bullet fired is a prayer to Vulcan. In episode 6, Wednesday and Shadow head to the small community where Vulcan runs his bullet-manufacturing facility. As they drive into town, they pass citizens of all ages, militantly dressed with red armbands emblazoned with “Vulcan,” and wielding guns. The people, Wednesday comments, are all “dedicated to one sticky belief: America. Their America.”

After leaving Vulcan, Wednesday takes Shadow to visit another old god, Ostara (or Easter, as she’s also known), the pagan god of rebirth. It’s Easter Sunday, and Ostara, played by Kristen Chenoweth, is throwing a grand party at her palatial estate. She too has undergone a rebranding, courtesy of the new gods, and what was once a pagan holiday is now celebrated as a Christian one. And yet, when people come together on Easter Sunday, dyeing eggs and lavishly feasting on lamb or rabbit, as they once did before Jesus rose, in those traditions they are celebrating Ostara as much as they are Jesus: “We popularized the pagan,” says Media.

The Weakness of ‘Iron Fist’

Luke Cage Is Not for Hire

In the season finale, Wednesday tells the new gods, “People create gods when they wonder why things happen. Do you know why things happen? Because gods make them happen.” The inevitable final showdown takes on its allegorical overtones: The progression of time has eradicated the need for the old gods. It’s not quite that Americans are all atheists; it’s that they worship entities that they may not even think of as gods. As Media has explained, “It’s religious Darwinism.” And with that, Easter mounts her retaliation: She begins to draw all of the life out of the earth, pulling in plants and flowers and fruits for miles around, creating what will surely be massive agricultural fallout for humans. With a second season on the horizon, one must assume that this is only the first phase of Ostara’s offering—rebirth.

In the end, we’re still left to ask: What is belief? As Ostara’s swirling winds begin to calm, Mr. Wednesday puts the question to the only human in sight: “What do you believe, Shadow?” He replies: “Everything.”