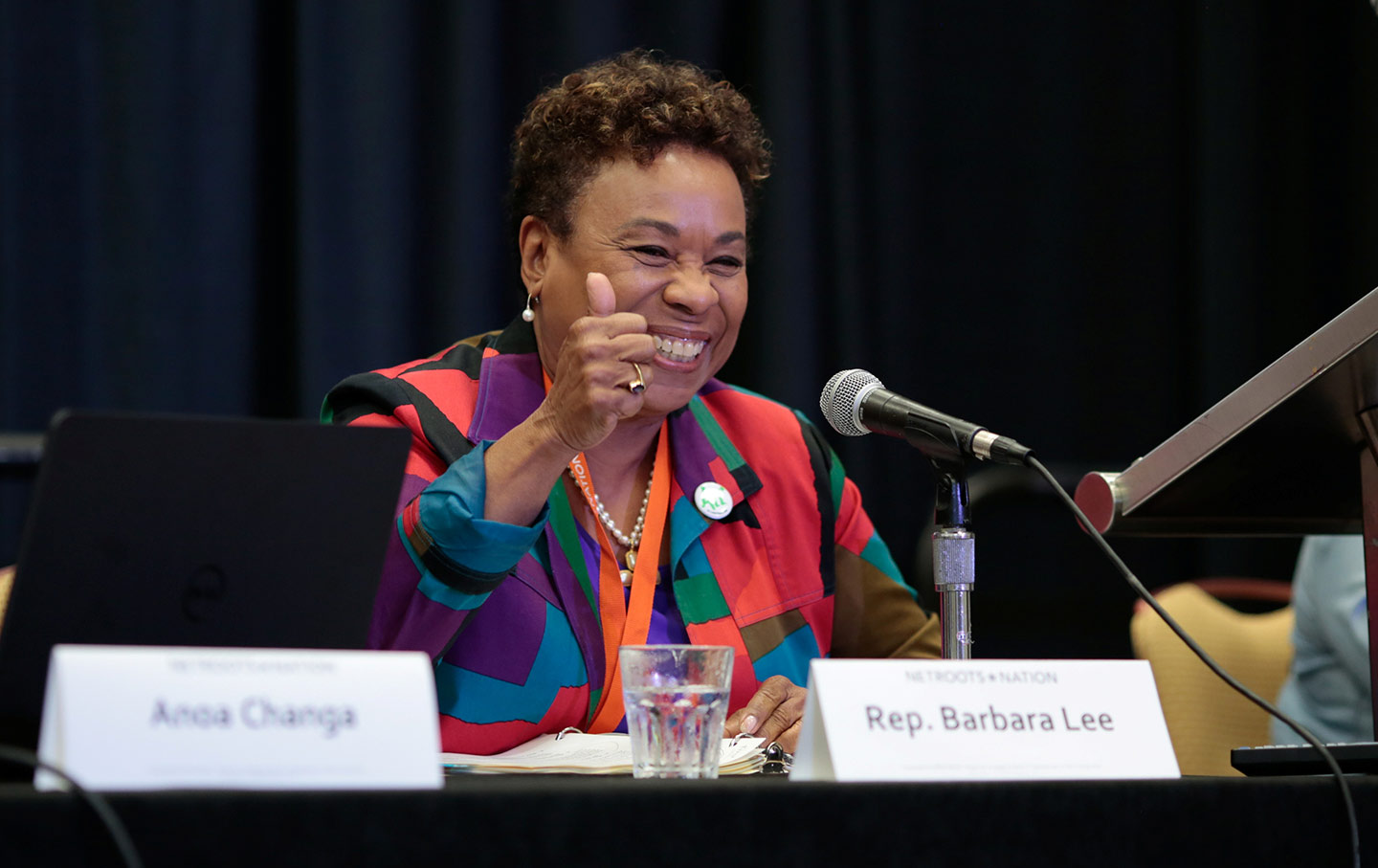 When the conversation turned to the question of whether Nancy Pelosi should be the next speaker of the House, Alexandria Ocasio-Cortez proposed an alternative.

Instead of maintaining the status quo in the House Democratic Caucus, the most talked-about Democratic congressional nominee of 2018 told a reporter, “I’d like to see new leadership, but I don’t even know what our options are. I mean, is Barbara Lee running? Call me when she does!”

That was a knowing response from a savvy Democrat, who became the face of a progressive surge within the Democratic Party after her June 26 primary defeat of Congressman Joe Crowley, the party’s fourth-highest-ranking leader in the House. Crowley was widely seen as a contender to replace House Democratic Leader Nancy Pelosi (D-CA) and in the event of a Democratic takeover of the chamber, the speakership.

That creates an opening for the party to move in a new direction, and Barbara Lee could take it there.

Lee, a former chair of the Congressional Black Caucus, former co-chair of the Congressional Progressive Caucus, and vice chair LGBT Equality Caucus who served as one of President Obama’s appointees to serve as a US representative to the United Nations General Assembly, is fully prepared to take a leadership position in the party caucus. And the 20-year veteran of the House is exploring the prospect of making a run for the position Crowley held.

“I am talking to members now about the viability and the possibility of my running for the Democratic Caucus chair position,” says Lee, explaining that her background as a single mother who once relied on food stamps would help her to expand the appeal of the party. “I think my leadership around issues [of] poverty, income inequality, racial justice really help broaden the message,” she says, and argues that she can broaden “the base and the participation of constituents and voters who we want to be included in the party.”

If she wins the leadership post after the November election, Lee could find herself on a fast track for more powerful positions—including, perhaps, the speakership. Lee is not trying to elbow aside Pelosi, a Bay Area ally whose whose long tenure as leader of the caucus has drawn increasing criticism from younger Democrats in the House and on the campaign trail. But Lee is thinking about putting herself in position for the changes in leadership that are likely to come.

There’s an opening for the Democratic Party to move in a new direction, and Barbara Lee could take it there.

Were Lee to join the leadership, it would be a powerful indication that congressional Democrats are beginning to recognize what the congresswoman from Oakland, Berkeley, and surrounding communities identifies as “signals that our base voters are very engaged and they want to see change.” Lee would be the first African-American woman to serve in the leadership of either party in the House and told the San Francisco Chronicle: “It’s time. African American women have been the smartest and most loyal voters for the Democratic Party, and often we don’t get the recognition or the involvement at the highest levels.”

Lee’s advancement to a leadership position would also demonstrate an understanding that voters desire new approaches to both domestic and foreign-policy issues. “We have to [renew] our checks and balances because this administration is wreaking havoc on the country and on the world,” says Lee, who earned national notice in September 2001 when she cast the only vote against the Bush-Cheney administration’s request for a blank-check authorization of the use of military force in response to the 9/11 terrorist attacks on the World Trade Center and the Pentagon.

Lee’s 2001 vote was as courageous as it was lonely. Media reports sought to portray her as a radical and suggested that she would be vulnerable to defeat. They were wrong. Lee was easily reelected and bumper stickers and posters across the country read: “Barbara Lee Speaks for Me!”

As the 2001 authorization for the use of military force (AUMF) has been used as justification for far-flung military interventions and ever more outlandish presidential overreach, more and more Democrats and Republicans aligned with Lee as she sought to repeal the AUMF.

Ocasio-Cortez’s primary campaign sounded themes that echoed Lee’s long advocacy, noting that “According to the Constitution, the right to declare war belongs to the legislative body, and yet many of these global acts of aggression have never once been voted on by Congress. In some cases, we’ve even acted unilaterally, without the backing of the United Nations. America should not be in the business of destabilizing countries. While we may see ourselves as liberators, the world increasingly views us as occupiers and aggressors. Alexandria believes that we must end the “forever war” by bringing our troops home, and ending the air strikes that perpetuate the cycle of terrorism throughout the world.”

Ocasio-Cortez also called for transitioning to a “peace economy,” arguing that, “In times when we’re told that there’s not enough money, Republicans and corporate Democrats seem to find the cash to fund a $1.1 trillion fighter jet program or a $1.7 trillion-dollar nuclear weapon ‘modernization’ program. The costs are extreme: the Pentagon’s budget for 2018 is $700 billion dollars: to continue fighting an endless War on Terror and refighting the Cold War with a new arms race that nobody can win.”

The New York Democrat is not alone. Hawaiian congressional candidate Kaniela Ing, a 29-year-old state representative who is competing for an open US House seat, asks: “When did ‘peace’ become a four-letter word?”

Lee’s argument that it is necessary to avert undeclared wars and dial back the excesses of the military-industrial complex have popular appeal. She has become one of the most dynamic and necessary voices in the Democratic Party on foreign-policy issues. In 2012, she presented the party’s platform proposal to the Democratic National Convention. Her anti-interventionist, diplomacy-focused worldview is gaining traction in a party caucus that now includes Lee allies such as Congressional Progressive Caucus co-chair Mark Pocan (D-WI) and Congressman Ro Khanna (D-CA). And it is all but certain that the pro-peace, pro-diplomacy contingent will grow after the 2018 election to include an outspoken advocate for moving Barbara Lee into the leadership of the House: Alexandria Ocasio-Cortez.