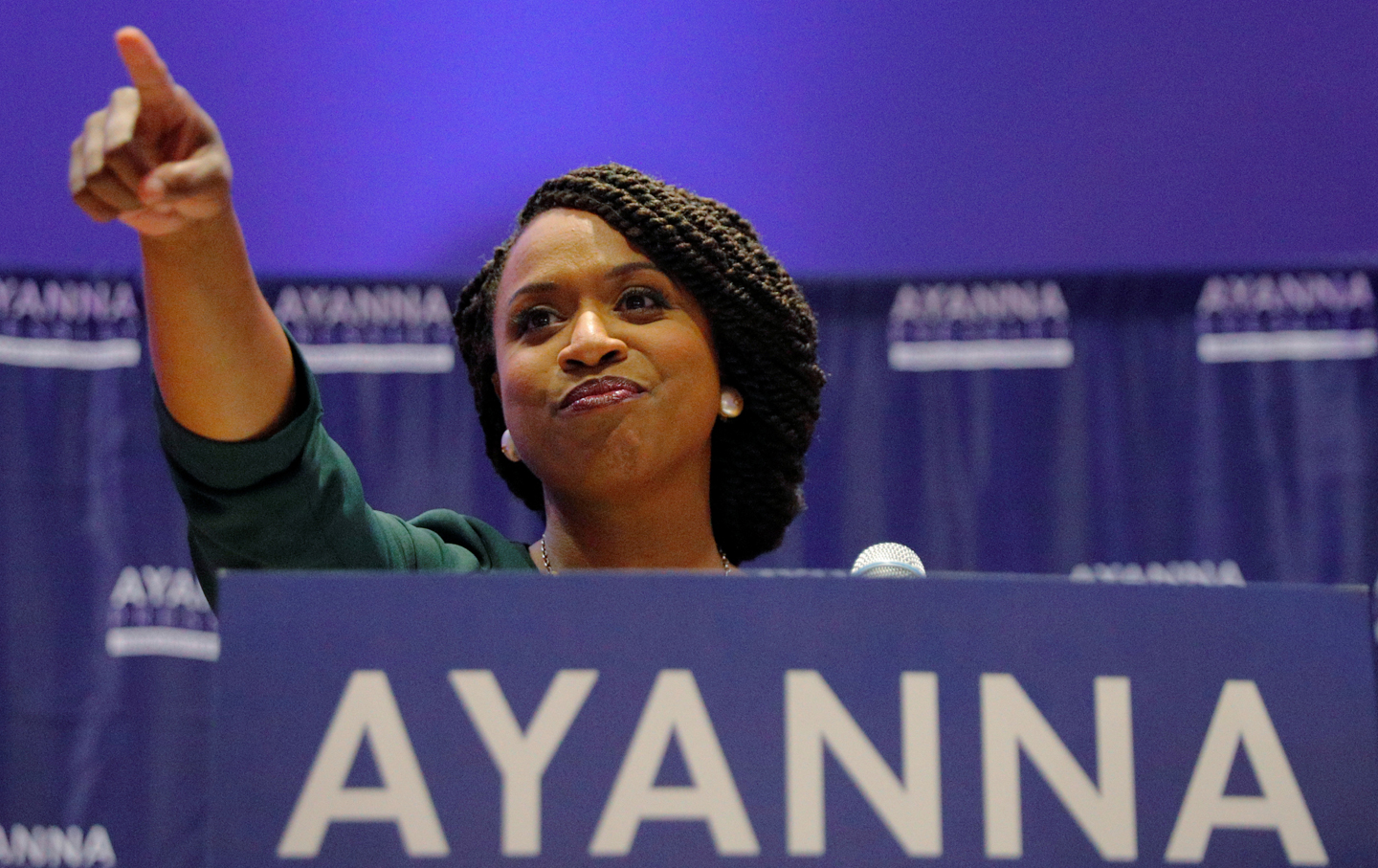 Ayanna Pressley won a historic victory Tuesday night, when she easily defeated a 10-term incumbent for the Democratic nomination in a Boston-area congressional district. A now all-but-certain November victory will send her to Washington as the first African American to represent Massachusetts in the US House of Representatives. She will carry forward an epic tradition of service to communities that sent a young John Kennedy to Congress and later elected House speaker Tip O’Neill.

By any measure, these are notable accomplishments.

Yet what makes Pressley’s 59-41 victory so truly historic has as much to do with the future direction of the national Democratic Party—and perhaps of American politics—as it does with the local politics of Boston, Cambridge, Somerville, and the rest of the seventh district in Massachusetts. Like New York Congressman Joe Crowley, who was defeated in June by 28-year-old democratic socialist Alexandria Ocasio-Cortez, Massachusetts Congressman Mike Capuano, who Pressley upset Tuesday night with support from Ocasio-Cortez, was an entrenched Democratic representative with a credible voting record. Capuano was a good deal more progressive than Crowley, and more courageous on issues of consequence. But the 66-year-old Capuano still projected the image of a reasonably predictable DC Democrat.

In this volatile time, voters in Massachusetts—and in New York and in a lot of other places across the country—have been turning to candidates who are less predictable. Frustrated with old approaches that don’t seem to be working against increasingly reactionary Republicans, these voters are signaling a desire for a bolder politics that proposes a fierce fight against economic, social, and racial injustice.

Ayanna Pressley ran as an agent of change, not just in the partisan competition between Democrats and Republicans, but in the battle to define a new direction for the Democratic Party. She welcomed endorsements from groups that seek to move the party toward more boldly progressive stances on the issues and toward clearer alliances with grassroots movements, including Justice Democrats, Progressive Massachusetts and Democracy for America. Late Tuesday evening, DFA chair Jim Dean declared that: “Ayanna Pressley’s remarkable victory tonight is testament to the strength of the grassroots movement she built, and an important reflection of the generational, multiracial inclusive populist transformation that’s happening in the Democratic Party right now all across the country.”

Pressley embraced this new politics from the start of a campaign in which she told voters that: “I am running for Congress because we desperately need inclusive, transformative leadership at this pivotal moment. The 7th Congressional District is the most diverse district in Massachusetts, and is one of the most unequal in the country. The people of this district deserve a representative who will enlist them as partners in the development, visioning, and governing of their communities. Activism is no longer an option, but is the expectation of our generation.”

That last line was the key. Pressley, 44, promised representation and activism. She communicated a sense of urgency that Capuano never quite mustered—and that most members of the House Democratic Caucus never quite muster. After she voted on Tuesday, Pressley announced: “This is a fight for the soul of our party, and the future of our democracy, at a time when our country is at a crossroads, the Massachusetts 7th is at a crossroads.”

On specific issues, Pressley and Capuano stood on common ground. But on the question of how to address those issues, they diverged. Though she is a savvy former aide to Congressman Joseph P. Kennedy II and Senator John Kerry who ran with the support of Massachusetts Attorney General Maura Healey and the Boston Globe editorial page, Pressley campaigned as an insurgent.

She was blunt about her mission, arguing that, “The job description of our representatives in Congress has changed. Now, more than ever, we need representatives who will be proactive partners with our communities, and who will not shy away from difficult political fights.”

Pressley left no doubt about the fights she wants to take on, and about the president she will oppose with a passion rooted in the resistance movements of the moment.

In a pointed argument for her candidacy, which referenced her own working-class roots and explained her determination to take up the struggles of neglected voters and communities, Pressley wrote:

Today, when you board the MBTA’s number 1 bus in Cambridge, it’s less than three miles to Dudley Station in Roxbury, but by the time you’ve made the 30-minute trip, the median household income in the neighborhoods around you have dropped by nearly $50,000 a year. As the bus rolls through Back Bay, the average person around you might expect to live until he or she is 92 years old, but when it arrives in Roxbury, the average life expectancy has fallen by as much as 30 years. A student riding the bus home to Dudley is, on average, nearly 20 percent less likely to graduate from high school in four years than a peer living just across the Charles.

These types of disparities exist across the 7th District, and they are not naturally occurring; they are the legacy of decades of policies that have hardened systemic racism, increased income inequality, and advantaged the affluent. We have seen moments of progress, but we are now, once again, confronted by an administration in Washington that is working to roll back the clock—implementing cruel, draconian policies that strip away critical rights and sow further division in our communities.

On Tuesday, the voters of this most diverse district in Massachusetts switched Capuano out and put Pressley into the fight with Donald Trump. It was not so much a rejection of Capuano as it was an embrace of Pressley’s sense of urgency—and of the possibility for a Democratic politics that goes deeper and pushes harder against inequality, against systemic racism and against a military-industrial complex that claims too much of the nation’s treasure.

As Pressley puts it, “My career has been defined by tackling the issues that are important to the communities I represent, even when they are not popular or easy. That is part of my mother’s legacy, making sure that I understood not just my rights, but my responsibilities—my responsibility to speak up and lead, especially for those who have heard their own voices silenced too often before. Those closest to the pain should be closest to the power—that is the mantle I will carry with me to Congress.”