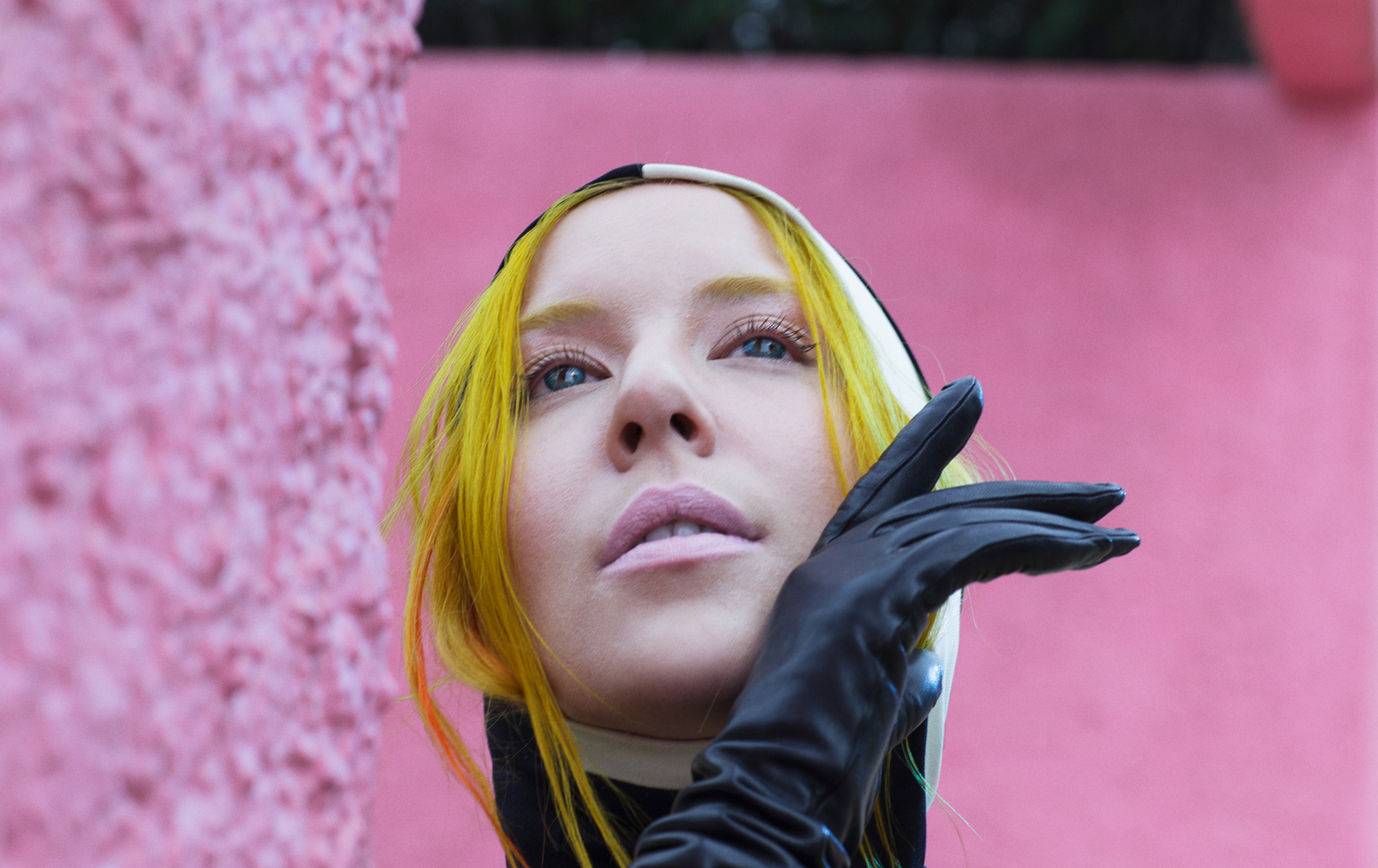 “Future politics” is a phrase that might have sounded vaguely hopeful back in early 2009—but now, in 2017, it has a bit more of a threatening tone. Perhaps that’s because in politics, as in most areas of human life, everything new is a regurgitation of something old. So when we find ourselves facing a presidential administration that takes the strident nationalism of the 1930s, the voter discrimination of the 1960s (and earlier), and the environmental degradation we were just beginning to address, then retrofits it for the Internet age and sells it as something wholly new, we have a right to be wary of what’s to come.

Future Politics, Katie Stelmanis’s third album under the nom de rock Austra, embraces this duality. Its iciness, courtesy of some collector-level synths and artfully old microphones, gives it a soundtrack-for-the-coming-dystopia feel. But on the album’s title track, Austra finds herself in a despairing and lonely emotional state and makes the following vow: “I’m never coming back here / There’s only one way / Future politics.”

There’s a contradiction inherent in this—an album that calls for a different future by harking back to the past, an album that fights against politics by calling for more politics. Yet because this is a political album but not a protest album, it works. Some songs were inspired by specific events: For example, Austra wrote the album’s closer, “43,” while living in Mexico City, in homage to the 43 murdered students from the Ayotzinapa Rural Teachers’ College. But her music is never didactic; that atrocity is evoked only by the song’s sorrowful ambiance. Austra never forgets that she’s a songwriter, not a political commentator. This is too frequently an accusation against pop singers, but Future Politics is a reminder of just how important such work can be.

Pop music has never been the most sophisticated vehicle for political statements, but it can sometimes be the most powerful. Take Madonna: Her feminist messaging can seem pretty facile these days, but it’s easy to forget that she comes from a different politi-pop era. Her 1989 music video for “Like a Prayer”—one of her first overt excursions into politics—was wildly controversial. It featured burning crosses, a sexy black deity figure, and a biased encounter with the police, which, for some, may have been too many layers covering the “point.” But it’s easy to see why it riled up the American Family Association and other conservative groups: The hot-button issues of their time (and ours)—race, religion, violence, and sex—are mashed up to sexy effect.

On this album, Austra takes on that general ambition and does it one better. She’s a strong (if unexpected) pop songwriter and singer from the Cocteau Twins school of goth emoting: take a few near-impenetrable lyrics and deliver them like a liturgy in a pained yet beautiful soprano. What results is something much stranger and more malleable than a straightforward narrative approach would yield. Her favorite lyrical trick is repetition: Similar words with a different affect or pitch build throughout a song. What she writes is simple, but the album succeeds because of its attention to musical details. Take “I Love You More Than You Love Yourself,” with the beat continuing a few steps after the rest of the song ends, or “Deep Thought,” which begins with the kind of harp familiar from early-2000s R&B taking on a much more complicated melody. Austra produced the album herself, and she has an impressive ear for those moments when her songwriting can be amplified by a well-placed production trick.

Austra made Future Politics with an exclusively female team, including behind the mixing consoles—an exceedingly rare occurrence in the world of pop music. A listener could question whether that makes a difference in the sound, yet it’s pivotal to her project: She’s backing up her politics with action. Her new album was released on the day of Donald Trump’s inauguration, and for the first 24 hours, it was available as a pay-as-you-please download whose proceeds would be donated to Planned Parenthood.

All in all, Future Politics feels like a dispatch from a sadder, harsher world, which is why it’s difficult not to make it all about present politics. As a Canadian, Austra may not have the same gnawed fingernails as her American counterparts these days, but she’s schooled in the issues of feminism and cares passionately about them. The planning for this album commenced before the world started to seem a lot darker over the course of the last year, but it captures well the mood of Trump’s America. As distressing as it may be to view albums like Future Politics as a mirror for our country’s current political direction, it’s comforting to know that artists have been exploring this dread for a while. They seem to have a certain clairvoyance about where society is headed. Here’s hoping that Austra’s next album will be a little sunnier.