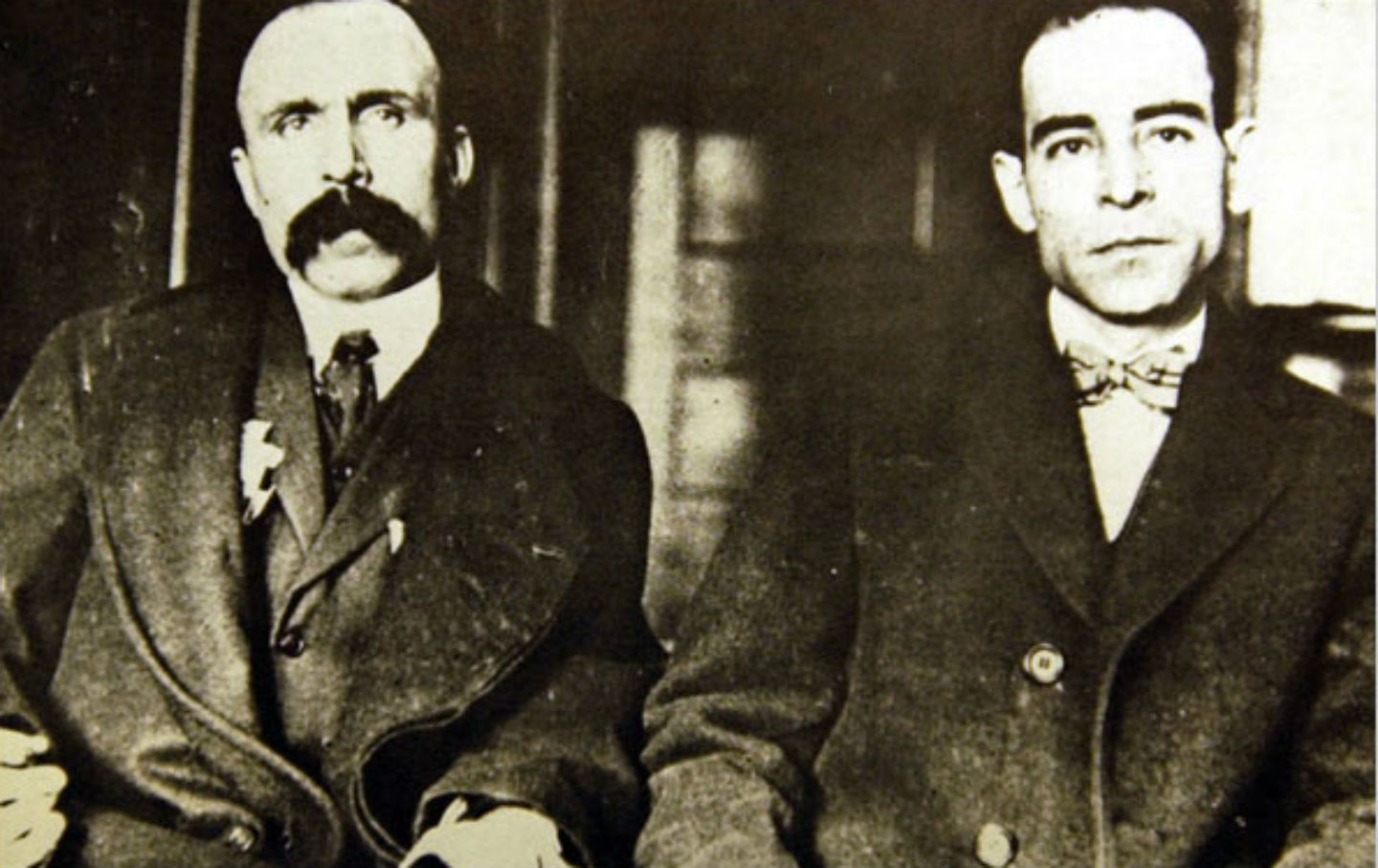 Sacco and Vanzetti, in handcuffs, in 1927. (Wikimedia Commons/Boston Public Library)

It is more difficult on some days than it is on others to find an important event that happened that day in history and to find something interesting in The Nation’s archives about it. The August 8 entry on the birth of Dustin Hoffman was, clearly, not an example of that, but perhaps the August 19 entry on the first race at the Indianapolis Motor Speedway was. In any case, August 23 has been such a busy—and, for The Nation, utterly devastating—day in history that for the first and last time we need to commemorate the anniversaries of two distinct events that happened on the same day twelve years apart.

In 1927, the Italian immigrant anarchists Nicola Sacco and Bartolomeo Vanzetti were executed by the state of Massachusetts, accused, on extraordinarily flimsy evidence, of robbery and murder. In response, The Nation’s editor and publisher Oswald Garrison Villard wrote one of the most powerful editorials the magazine has ever published, “Massachusetts the Murderer,” which was excerpted in The Nation’s recent 150th anniversary issue.

Massachusetts has taken two lives with a vindictiveness and brutality unsurpassed in our history. It has blotted out the fishmonger and the cobbler whose names are now known around the world, men who in the minds of multitudes will take for the moment their places with the Carpenter. In the face of a world-wide protest of never-equalled dimensions, in the face of appeals from lawyers and judges of the highest standing, and from the heads of foreign governments—with complete contempt for the earnest pleas of the entire European press and some of the leading American daily newspapers that the guilt of the two men was not established beyond doubt—Governor [Alvan T.] Fuller and his council have sent Sacco and Vanzetti to their deaths. Henceforth the world over, when men wish to describe what is worst in any judicial system, they will declare that it is akin to Massachusetts justice; they will speak for years to come with horror of a State in which two men could be executed after seven years of monstrous torture, in the face of world-wide appeals for mercy; when the bar itself was divided as to the righteousness of the procedure; when the evidence was reviewed by only one judge and he was condemned for grave impropriety of conduct in connection with the case. Massachusetts, said Daniel Webster, “there she is.” There she is today, a target for the opprobrium of mankind. Her constituted authorities have used their constitutional powers as cold-bloodedly as ever a Roman centurion had his legal way….

No, they may swallow this who will. To it we cannot bring our minds or our consciences. But innocent or guilty these men made their mark. Their bearing in the face of death, their shining courage, their resignation, the range of their spirits—these are deathless things, and somehow or other the memory of them goes on in the hearts of men. No one can say what it all means or foretell where this case will end. But this is clear: This legal murder in Boston will profoundly and adversely affect the international relations of the United States, and its moral standing throughout the world for at least a decade to come. Massachusetts has triumphantly killed an Italian fishmonger and an Italian cobbler, but she has blackened the name of the United States across all the seas.

Twelve years later, Adolf Hitler and Joseph Stalin chose one of the blackest days on the calendar of the international left to sign their mutual non-aggression pact. All through the 1930s, the Soviet Union had led the fight against fascism only to command its followers and fellow-travelers to cozy up to the Nazis at the drop of a hat. The agreement sold out Poland, signaled the beginning of the end for European Jews, and destroyed American socialism. Things moved fast in the final week of August 1939, putting a weekly like The Nation in a difficult spot. But with the whole world about to erupt in flames, the editors managed one sarcastic editorial paragraph about the pact between Hitler’s Germany and Stalin’s Soviet Union.

It should be many a long winter’s night before the more politically minded gentry of both the right and the left get used to their new bedfellows. The plight of the Communist is only the most obviously pathetic case. After expounding the thesis that, Marx or no Marx, there was a great difference between a fascist and an ordinary capitalist and that it was necessary to sleep with the latter in order to frustrate the former, he must now hail Stalin for climbing into bed with Hitler in order to make life miserable for [British Prime Minister Neville] Chamberlain. After scoring appeasement day in and day out, he must now join the Munich chorus by pointing out that the Russian-German pact marked a great day for Poland by showing the way to peace—the idea being that Poland, too, is free to make a pact with Germany and thus prevent a war…. The Danse Macabre is on. Change your partners!