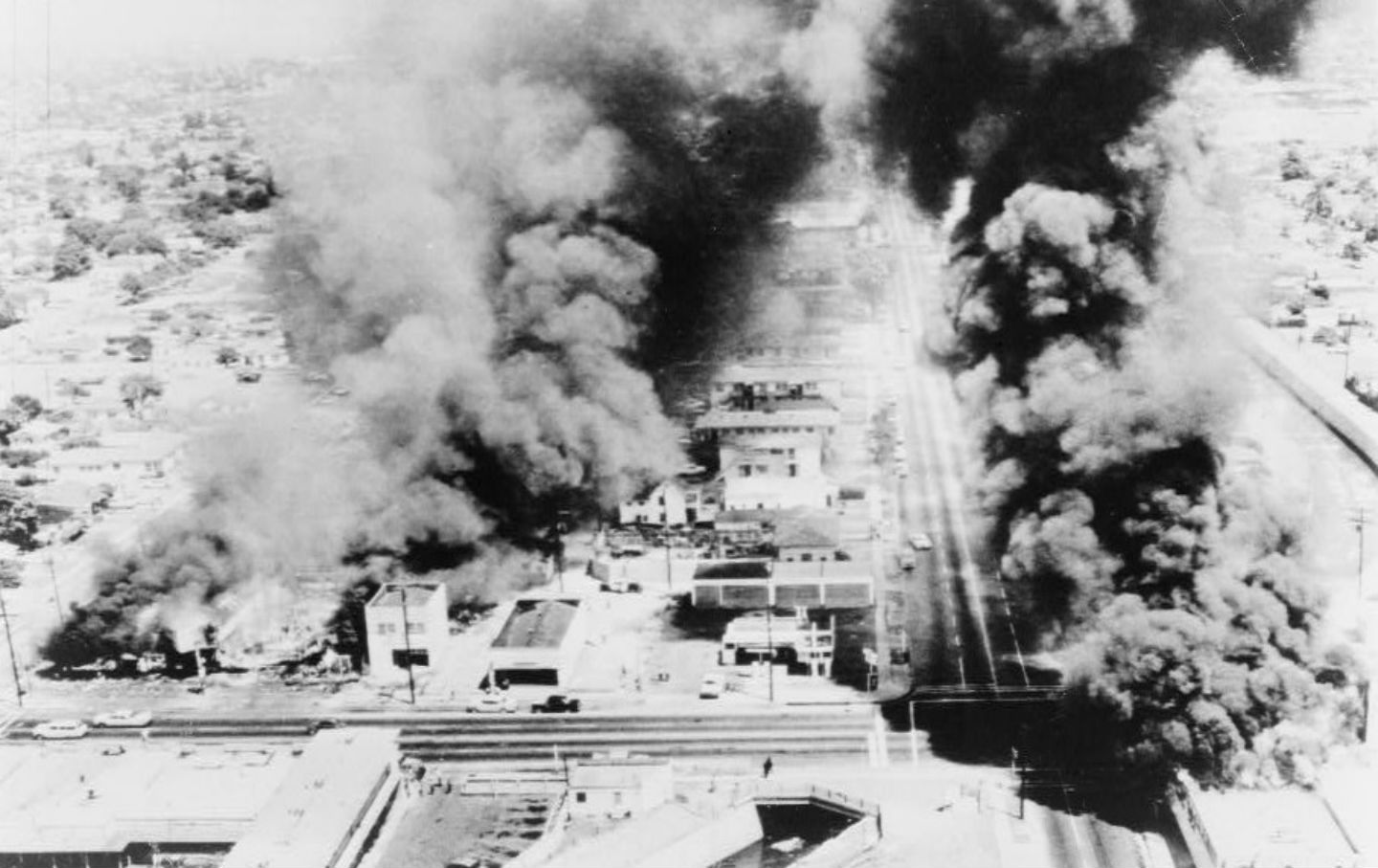 Buildings shown on fire during the 1965 Watts riots. Thirty-four people died and an estimated $40 million in property damage was recorded. (Library of Congress)

Summer is to riots as autumn is to financial meltdowns. On this day in 1965, the Watts section of Los Angeles convulsed with one of most damaging riots in American history. The Nation’s editor at the time, Carey McWilliams, was a longtime observer of life in California’s Southland and, especially, of its racial and economic tensions. His editorial about Watts, “The Forgotten Slum,” anticipates by almost three decades much of what that other great LA watcher, the historian Mike Davis, would write in his classic City of Quartz, which itself anticipated the explosive violence following the acquittal of Rodney King’s abusers, which anticipated Ferguson in 2014 and Baltimore in 2015…Round and round she goes, and where she stops nobody knows…

Thirty-one dead, over 700 injured, 2,200 under arrest, 1,000 fires, property damage of $200 million—such is the preliminary toll for the long weekend of rioting in the Watts area of Los Angeles. A feverish search for scapegoats is now under way and will no doubt continue through the 1966 gubernatorial campaign…

The list is long and includes The Heat—a favorite scapegoat in all race-riot investigations—and Social Conditions. Here Watts qualifies on all counts: dropouts, delinquency, disease and dependency. But none of these social factors alone or in combination necessarily “cause” race riots, actually it is when conditions seem to be improving that the riots usually explode. Predictably the forthcoming investigation ordered by Governor Brown will stress the same tiresome clichés: police brutality, inadequate leadership, The Heat, slum conditions. All the while the truth about Watts is right there in front of people, in plain boldface type, for all to read: so simple that it is incredible. The hatred and violence of race riots is triggered by contempt, and of all forms of contempt the most intolerable is nonrecognition, the general unawareness that a minority is festering in squalor. Until the riots began, Watts had simply been forgotten by the encompassing ‘white’ community….

The sad fact is that most race riots have brought some relief and improvement in race relations and the Los Angeles riots will not be an exception. The seeming indifference of the larger community is structural. Los Angeles is the city of sprawl. To sprawl is to relax and feel comfortable. For most residents, Los Angeles is a comfortable city, psychologically as well as physically, because the unpleasant can be kept in its place—at a safe distance from most of the people. By accident more than design, Los Angeles has been organized to further the general tendency toward social indifference. The freeways have been carefully designed to skim over and skirt around such eyesores as Watts and portions of East Los Angeles; even the downtown section, a portion of which has become a shopping area for minorities, has been partially bypassed. Now that the community knows once again that Watts exists, it will begin to pay some attention to its problems.