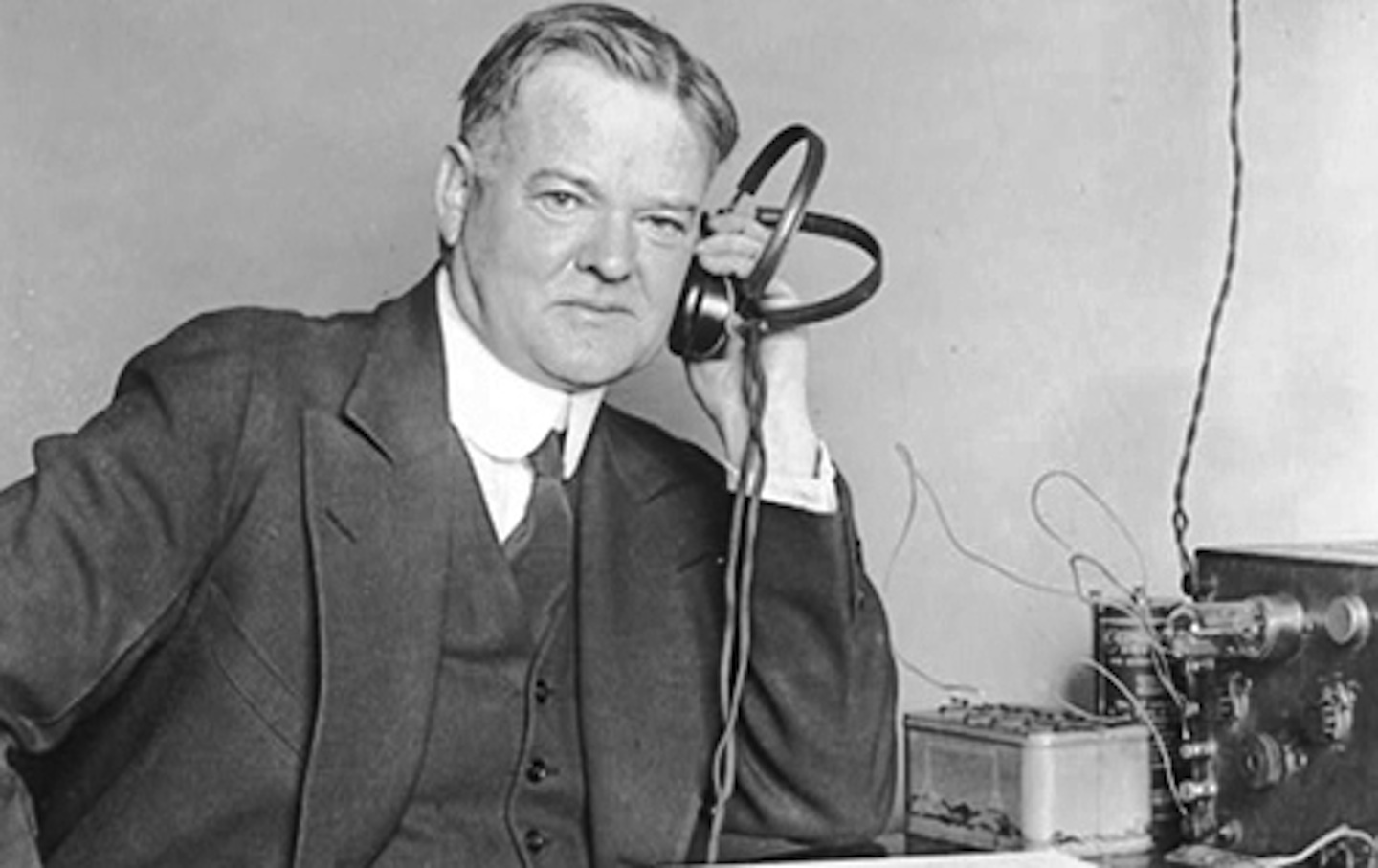 Herbert Hoover listening to a radio (Department of Commerce)

By 1920, The Nation was an openly leftist magazine, having dropped the free-market conservatism that had distinguished it in the years before World War I as, according to H.L. Mencken, the dullest periodical in the world. Strange it is, that, that that year a novelist named Robert Herrick took to the pages of The Nation to laud the presidential prospects of Republican Herbert Hoover, born on this date in 1874. Hoover wouldn’t in fact be elected president until eight years later, but Herrick’s counterintuitive brief for Hoover, who had helped organize the American food economy during the war, stands as a rather quizzical toast from the left to the right. In another Nation essay in 1930, however, when the US was deep into the Depression, Herrick recanted his idiosyncratic endorsement of a decade earlier.

I am for Hoover first and most importantly, paradoxical as it may seem, because he is an individualist and capitalist—the only apparently sincere and convinced one of that faith in all the growing crowd of aspirants. He is not ashamed of capitalism: he really believes that it is the social system best fitted for “the human animal” (big and little) in his present state of political development—to be administered fairly and wisely ameliorated, and not smashed…

He believes in the system and he understands it—which is an even more important thing than belief. It is the sheer intelligence of the man Hoover that has won my allegiance. The others babble platitudes; like members of an outworn priestly caste they seem to think that by merely mumbling catchwords they can exorcise the proletarian devil. Hoover understands the infinitely intricate machine that modern capitalistic society has become. He knows just what will happen if you pull this lever instead of that one—or if you inadvertently should drop a wrench into its delicately interlacing gears. You never get a vague or evasive or rhetorical answer from Hoover, whether you prod him about sugar or inflation or compulsory arbitration. Instead of a rumble betraying emptiness or confusion of mind—and the political fear of saying something definite—you get from Hoover the cool ordered conclusions of the expert. Whether one’s sympathies are radical or reactionary, what we must have as a leader today is someone who knows. And the only man in the United States who thoroughly understands this moloch of a machine to which we are all inextricably hitched is Hoover. The machine is running badly—that needs no argument. Shall we smash it or patch it or try to forget its fearful groanings and act as if all were serene? I for one, who have no great faith in the machine or its perpetuity in its present form, would put the expert in charge and let him do his best for it. I do not like to set to sea—in this turbulent weather—in a Leviathan with a ferry boat captain on the bridge, trusting to chance and his good intentions. Nor with a captain who does not believe in steamships, but in dirigibles and planes! Hoover is our best expert, providentially trained in world affairs, and he is honest beyond the shadow of a doubt.