DSA members at the convention in Chicago. (Sean Duffy)

When James Williams started as a labor organizer in the 1960s, he carried around an A.B. Dick mimeograph machine—the type where you had to manually spread ink inside the drum with a brush—along with an Underwood typewriter in the trunk of his car. During an organizing drive, he would wait for workers to get off a shift at 3 o’clock and report what had happened in the shop that day, and Williams would have a leaflet ready for the midnight shift.

“Now,” the 75-year old member of the Tacoma, Washington, chapter of the Democratic Socialists of America reflects, “we got WiFi and social media and things we could only dream of.” At the recent DSA Convention in Chicago, he is surrounded by people half a century his junior, many of whom have developed community, rituals, shared references, and friendships on Twitter, and practically none of whom can picture a mimeograph machine, much less operate one. “I’m way behind the curve.”

America Has a Long and Storied Socialist Tradition. DSA Is Reviving It.

Williams, a retired professor of social work initially from Kentucky, joined DSA in 1992. For most of the following 25 years, however, his involvement has consisted chiefly of reading and trying to stay informed about what was going on in the organization. Retiring to Tacoma in 2010, he found that the local chapter had about 15 members—on paper. “All of us were white geezers, and we never really met or did anything,” he said. “Then Bernie came along, and whoosh!”

That is the sound of the membership of DSA exploding from roughly 6,000 to its current figure over 25,000. It now boasts that it is the largest socialist organization in the United States since World War II. With 697 delegates from 49 states, the 2017 convention is by considerable measure the organization’s largest ever. The great majority of the new members are Bernie Sanders’s most devout base of support: young people.

Vaughan Allen Goodwin saw it coming. “I knew that at some point the frustrations of young people would cause them to want to go somewhere and to be in something,” says the 49-year-old Boston-based delegate. Goodwin, inspired by the late scholar Manning Marable to get involved with Jesse Jackson’s 1988 presidential campaign, has been a DSA member ever since. This is his first national convention, though. “The emphasis was not on young people last time I was invited,” he explains. “Most successful movements start off and are led by young people.”

Like Williams, Goodwin took a hiatus from DSA, coming back after many years when the blossoming membership encouraged him to bring his long experience organizing to the novice-heavy chapter. Hailing initially from Philadelphia, Goodwin has never known a life without the left: His mother was a labor organizer, he attended Morehouse College for undergrad, and then set out for the north of England for graduate school at the University of Lancashire. It was there that he got his first taste of organizing, serving as an antiracist officer with the National Union of Students. When he returned stateside, Goodwin moved to Boston to go into his mother’s line of business and organize with a labor union.

“We have to make sure that we provide nurturing direction and support to the young people here,” he says. “Metro Boston DSA has over 500 members, including young delegates from schools like MIT and Harvard.” Despite the cultural differences between union organizers and Ivy League STEM experts, Goodwin reports, the chapter is a bastion of reciprocity and mutuality. “We’re equals,” he says. “I value and respect young people, and the young people value and respect me.” 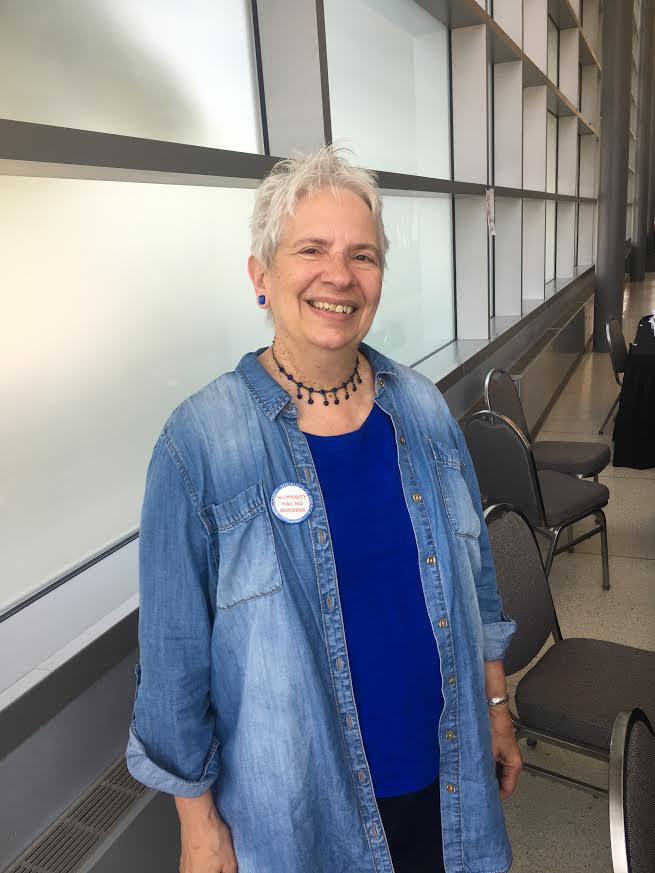 For Maxine Phillips, 70 years old, DSA’s demographic shift has not unfolded without a hitch. Having lost her battle to dissuade the voting body from endorsing the Boycott, Divestment, Sanctions movement to end Israeli apartheid in Palestine, she laments “this thing with the chanting and screaming and stuff,” the chants of “Free, free Palestine” ringing in her ears still.(Phillips clarifies that she opposes the academic boycott, not the boycott of goods made in the Occupied Territories.) “When I came in, there were these old socialist traditions of not clapping,” she recalls. “People aren’t used to that particular style of debate.”

Having been raised by New Deal Democrats in a Republican-dominated part of Pennsylvania, a young Phillips became active in the civil-rights and antiwar movements. Winding up a participant in a discussion group on corporate capitalism at New York’s leftist Judson Memorial Church, she was moved to join DSA in 1977. Soon, she was hired to publish the organization’s newsletter, Democratic Left, which she did for seven years before becoming DSA’s National Director.

“I’ve loved going to the May Day demonstrations and not recognizing anyone. For years, I’d show up to things and it was the same people all the time.” —Maxine Phillips

Eventually, Phillips took a break from DSA, but not out of discouragement. “I needed a job that allowed me to be with my family,” she explains. “A political job was not it.” It is only now that her kids are grown and she has retired, that time has opened up for her to return to her work with DSA. And what a time to revive her involvement: “This is really the first time in my political life that I can say to someone, ‘I’m a Democratic Socialist’ and, even if they’re outside the left, they know what you’re talking about,” she says. “Before, if I was back in Pennsylvania and didn’t want to get into a big fight with someone, I’d just say I worked for a political-science magazine or that I was very active politically, and leave it at that.” Now, she gets to be up front about what her involvement entails. “It’s great, it’s very liberating.” 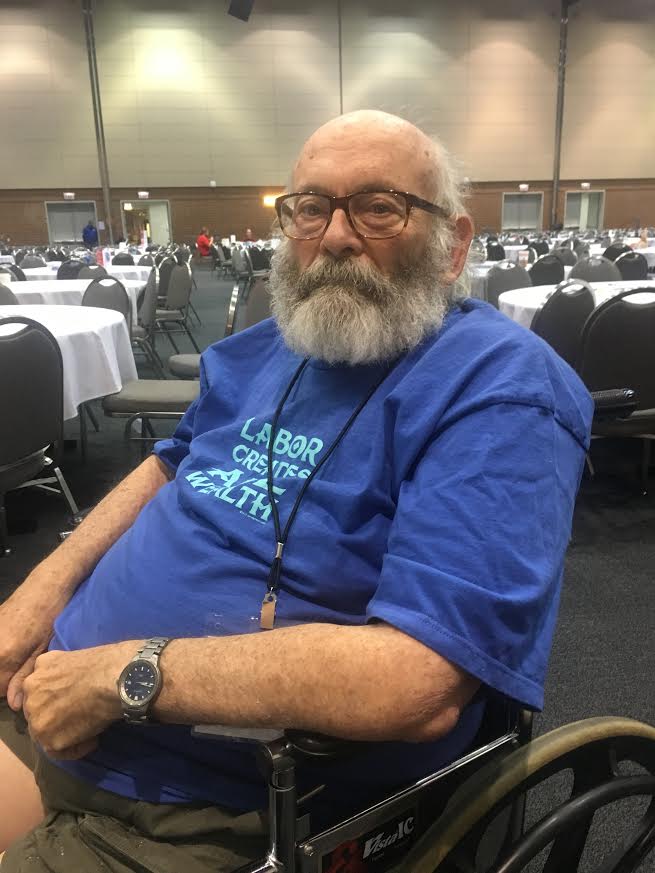 For James Williams, the thrill of DSA’s dramatic growth has brought its own set of challenges. “I feel like an old dinosaur,” he confesses. “I don’t understand a lot of the culture and sometimes I think we’re speaking different languages.” It’s not just meme references and technological jargon that keeps him relatively quiet at meetings, though. “I have to think about my own role,” he says. “I don’t want to be one of those old white guys that has the answer to everything. We got enough of them there already.”

Williams’s reluctance to assert himself in meeting hasn’t kept the young members of Tacoma DSA from seeking out his advice on theory, strategy, and tactics. “Mostly younger trade unionists,” he says, seek out his mentorship. “The longshoreman’s union has developed this young workers caucus that does a lot of good stuff” including visiting Standing Rock and supporting a miners’ strike in Idaho. “These are militant young guys, and one of the best is one of our members—a ball of fire.”

But at the convention, it’s the lack of fire that most impresses Williams. “As I look around the room, I think the people are much more thoughtful than we were in the 1960s,” he says. “There’s no one here with their hair on fire, screaming. People are rationally thinking through important matters, drawing their own conclusions, and outstripping us on a lot of this stuff.”

That, says Vaughan Allen Goodwin, is the way it has always been. Likening DSA to the Student Nonviolent Coordinating Committee half a century ago, Goodwin sees this moment as part of a cycle. “Back in the 1940s and ’50s, Kwame Nkrumah, Nnamdi Azikiwe, Jomo Kenyatta—they all came out of Lincoln University,” he says. “They went back to their countries and led movements for African independence, and they were young people at the time.” Each generation, he observes, explores and experiments to build on the foundations lain by the previous one. “Resistance cannot just be ideological and courageous, it has to also be practical.”

“I don’t want to be one of those old white guys that has the answer to everything. We got enough of them there already.” —James Williams

For Maxine Phillips too, practical considerations are paramount. “I don’t know where the childcare is here,” she says. “It’s a big issue for the movement, and for the entire country.” (The Convention’s FAQ says that “We can provide space for people to supervise children.… We will not provide professional childcare.”) The urgency of this concern will only grow, she predicts, and she hopes that with it, the movement will develop imaginative solutions. “There was a time when the socialists had summer camps. Will we get to that point? With 25,000 members I don’t know, and a lot of them don’t have kids yet.”

However small in comparison to socialism’s heyday in the United States, even 25,000 presents its challenges. “When the conventions were smaller, you had more change to meet, to talk over meals. There’s no time here for talking,” Phillips says. “It’s just the difference between being small and big.” Last convention, she rode in a van with other members from New York, and the relationships that she built over that seven-hour trip, she still retains. In her view, the radically increased attendance has removed the conditions for that kind of interpersonal development. “Usually they try to have the convention all in one place,” she says; this year it spanned two different buildings. “When you only have 150, 200 people, it’s easy.” With hundreds and hundreds, it isn’t. “People are certainly friendly, but I’m not going to go out drinking with them. I assume if I were open to it somebody might invite me, but it has felt more atomized.”

Still, she can’t help be excited by the explosion of the organization. “I’ve loved going to the May Day demonstrations and not recognizing anyone,” she says. “For years, I’d show up to things and it was the same people all the time.”

James Williams is similarly invigorated. “It’s kind of astonishing,” he says. “I still have trouble getting my head around it.” He compares the current moment to the 1960s, an era of hope, optimism, and the sense that something was achievable. “There’s more optimism now than we’ve seen since then,” he says. “I’ve been to DSA conventions that could meet in the restroom.”