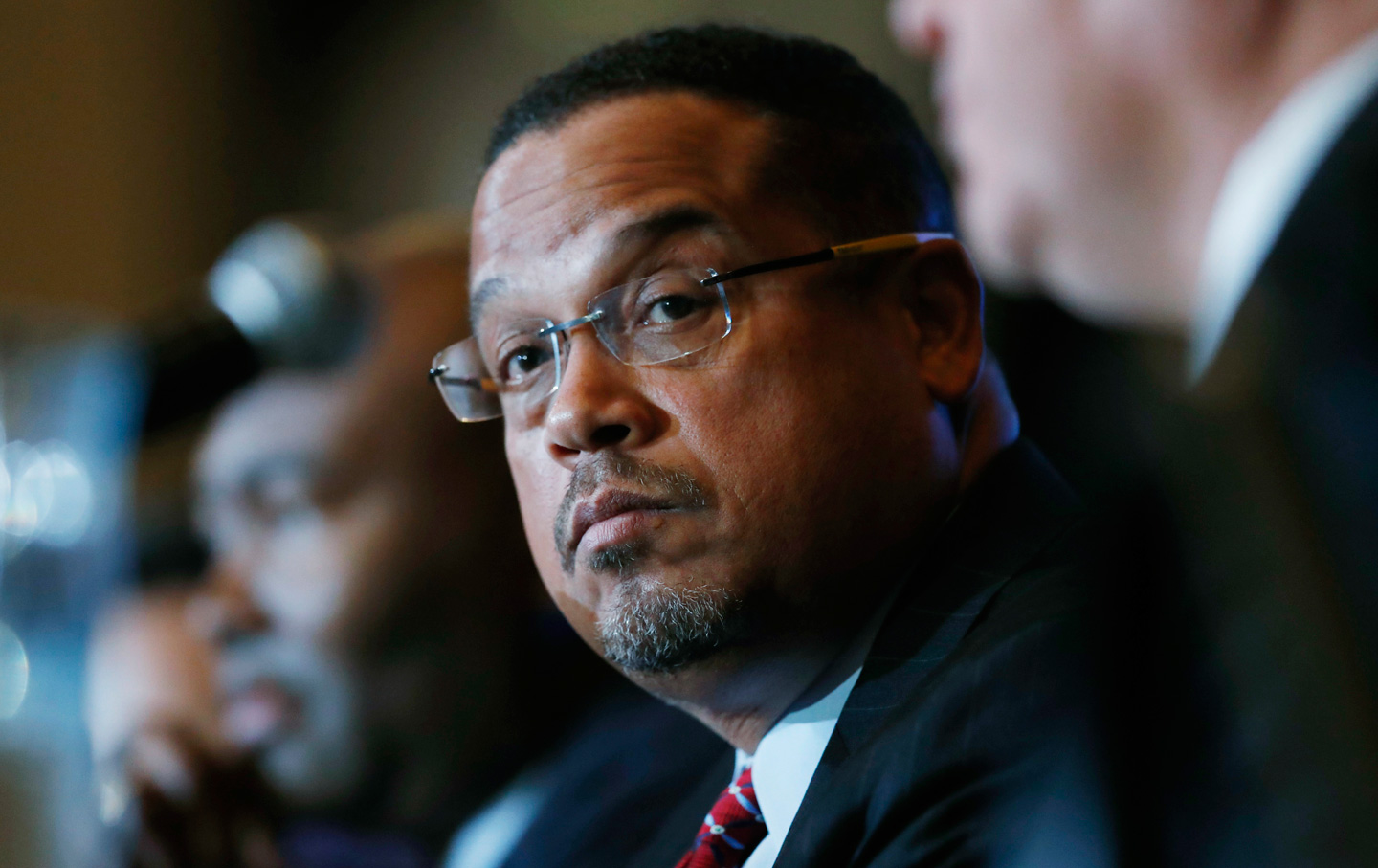 Keith Ellison listens as Ray Buckley speaks during a forum on the future of the Democratic Party, Friday, Dec. 2, 2016, in Denver. (AP Photo / David Zalubowski)

The fight for chair of the Democratic National Committee is supposed to be a titanic proxy battle between the mainstream party forces of Barack Obama and Hillary Clinton and the troops of the great left insurgency behind the 2016 presidential campaign of Bernie Sanders. It’s allegedly personified in the face-off between Labor Secretary Tom Perez, an accomplished, admired progressive allied with Obama and Clinton, vs. Minnesota Congressman Keith Ellison, a respected Progressive Caucus chair who backed Sanders early, then became a conciliatory force pulling the Clinton and Sanders wings together once Clinton won the primary.

But at a debate sponsored by The Huffington Post in Washington, DC, Wednesday night, 36 hours before Donald Trump’s inauguration, all seven candidates rejected that polarizing premise. It’s a diverse and well-qualified group. There are two red-state party leaders, Idaho Democratic Party Executive Director Sally Boynton-Brown and South Carolina party chair Jaime Harrison, plus a red-state mayor, Pete Buttigieg of South Bend, Indiana (that’s pronounced “Buddha-judge,” not “booty-gig,” as I’d been enjoying saying it). Respected New Hampshire party chair Ray Buckley touts his state’s solid performance for both Clinton and Obama, and in electing all Democratic women to their congressional delegation. Latecomer to the field Jehmu Greene, a longtime party activist who once ran Rock the Vote, told the story of being trained and mentored by the DNC, then disillusioned when it lost its grassroots organizing focus, she said.

All seven came out swinging—against Donald Trump. Perez got the biggest hand of the evening when he said Democrats should “hit him between the eyes with a two-by-four and treat him like [Senate majority leader] Mitch McConnell treated Barack Obama.” Asked whether Democrats could, and should, work with Trump, Ellison said he saw no grounds. “He’s already shown us where he stands. He put Steve Bannon in the White House, who is a renowned white supremacist and a misogynist. He has already started to institute a right-wing program. So we have to fight.”

But the seven rivals didn’t fight with one another, even on issues that could have been divisive. Ryan Grim asked how many thought Democratic megadonor (and Israel backer) Haim Saban should apologize for calling Ellison—whose youthful but long-severed ties with the Nation of Islam have been an issue to some moderates—”an anti-Semite” and saying he wouldn’t donate to the DNC if he becomes chair. All but Greene raised their hands. “Keith is a great guy,” Harrison said. “I don’t believe that there’s an anti-Semitic bone in his body.” (Later Ellison would return the favor, defending Harrison against attacks based on his work as a lobbyist, calling him “one of the best men I’ve ever met.”) Greene said she didn’t raise her hand on the Saban issue because she thought it was a “gotcha question” designed to “divide our funders from our leaders.”

Funding was a big topic in the debate, but again the candidates sought to elide, not accentuate, their differences. Ellison made a little news when he agreed, for the first time, to ask Sanders to make available his colossal fundraising list to the DNC. “We’re gonna call on everybody to give all the resources they have,” he told the crowd. “We’re in an emergency situation.” Of course Ellison can ask; that’s not the same as Sanders, who’s endorsed the Minnesota congressman’s bid to be chair, agreeing to do so.

There were mild differences over whether to turn down funding from lobbyists and lawyers, which Ellison has favored in the past. (Obama imposed the ban in 2009; former DNC chair Debbie Wasserman-Schultz lifted it in 2016.) Most of the other candidates seemed not to want to choose between grassroots, Sanders-style funding and corporate dollars, favoring an “all of the above, please” approach. Harrison was frank about the party’s needing the cash. A lobbyist ban “would create a hole of $18 million,” he said. “Some state parties have less than $50,000 on hand. With Republicans in complete control of government, I don’t see how we replace that $18 million. We are $2 million in debt at the DNC. I can’t single-handedly say let’s disarm.” Ellison seemed to back away from his call to reinstate the ban. “If I do become DNC chair, I am not going to impose a policy on anybody. We’re going to have a democratic process on how we arrive at funding the Democratic Party. If it’s the will of our party, that’s what we’ll do, but it would bring the responsibility on to everyone’s shoulders because we’d have to go find that money.” That was the extent of the clash on funding.

All seven ducked a question about whether they believed the DNC had a thumb on the scale for Clinton in the primaries, with Boynton-Brown calling that a “gotcha question.” If only Perez had done the same with a question about the Boycott, Divest, and Sanction movement against Israel, which has growing but still minority support within the party. Instead he cautiously answered it: “There have been many things said by that movement that have been destructive. Rather than forging consensus, they’ve torn us apart. I don’t think BDS is moving the ball forward.” The South Bend mayor had the best answer: “Resolving Middle East policy isn’t going to be our job. This isn’t a policy job.” He got a big hand. Of course, a majority of the DNC members voting on the chair will agree with Perez; it’s just that it gave his ideological detractors, who treat him as a tool of Obama, Clinton, and the party’s big donors, some ammunition.

In the end, every candidate offered something the party needs. All of them backed the “50-state strategy” pioneered by former DNC chair Howard Dean. One of three red-state Democrats, Harrison spoke most directly about what it means: “In South Carolina, where I’m the chair, we keep hitting up against this ceiling. We don’t have a partner in Washington, DC. We are gerrymandered to death. We like to say, if Jesus Christ came back and ran in some of these districts as a Democrat, he couldn’t win.”

They all seem to want to do the same thing—build up state parties, energize the grassroots, and elect more Democrats, at every level of government—the question is how to judge who can most effectively do that. New Hampshire’s Buckley has impressive, on-the-ground credentials, having turned his state blue or at least purple, with a state party organization admired around the country. Perez is widely credited with turning around the Justice Department’s Civil Rights Division after George W. Bush decimated it, and then doing the same for the Labor Department; he’s considered a great manager. Ellison—apart from representing the Sanders wing, which is huge, tells a compelling story of taking his from a low-turnout base to high-turnout base, and in the process buoying other Democrats, and other initiatives, in his states. Greene got a laugh when she suggested that all her rivals need to stay where they are, while Perez runs for governor of Maryland—leaving her to run the party. Harrison, Boynton-Brown, and Buttiegig bring a red-state perspective the DNC critically needs.

There will be more debates, including one during Inauguration weekend. They’re all welcome, as the party fights to find its voice and relevance in this dreary 2017.