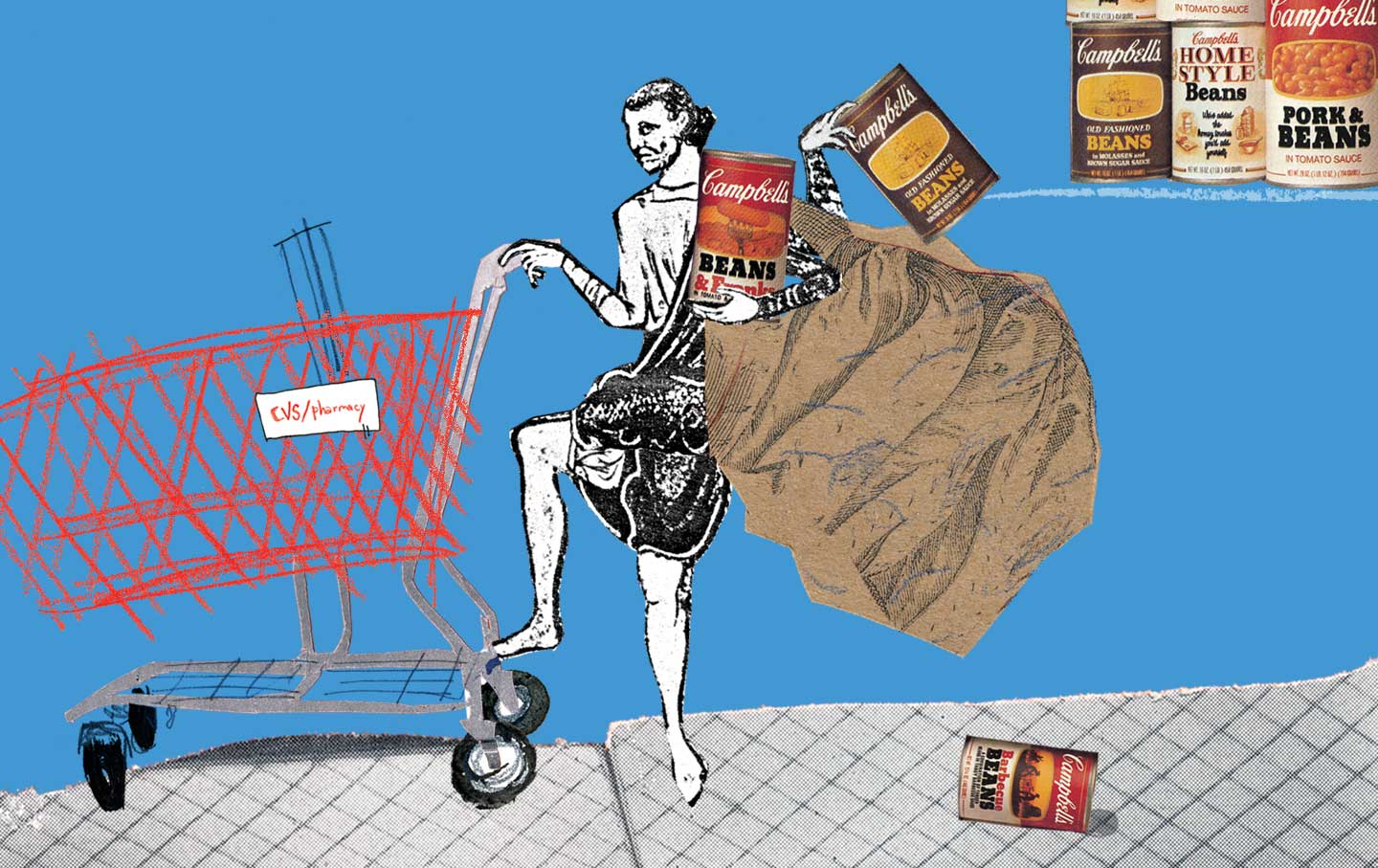 Is it morally objectionable to steal food to feed yourself, and only from chain businesses?

There’s no moral reason to refrain from stealing food from chain stores, especially if you live in one of the 14 percent of American households struggling to afford food. Food is a necessity. Stop & Shop can afford to help.

In 1970s Italy, shoplifting was rampant as part of a strategy called “autoreduction.” Consumers and workers sought to attack the capitalist system and improve their own living conditions in one go—consumers through theft, and workers through slowdowns or sabotage. In the context of a larger social movement called “autonomism,” autoreduction offered immediate redistribution, and forced governments and capitalists into reforms that improved people’s lives (reducing electricity prices, for example). Italians would storm through department stores in huge, rowdy mobs and just help themselves to stuff. Besides yielding political results, this was, obviously, crazy fun.

There is no moral reason to refrain from stealing food from the chain stores.

Initially, Hungry, I worried that shoplifting from a chain store might exacerbate the surveillance endured by its employees. Since we are not in the midst of an autonomist revolution, it stands to reason that retail workers might be singled out and blamed for losses. I called my colleague Spencer Woodman, who has investigated “shrinkage”—corporate-speak for profits lost to stealing—at Wal-Mart, the largest chain store in the United States. He told me that much of the shoplifting at Wal-Mart is committed by its own workers, who often make so little that they need food stamps. Further, shoplifting is so common, and companies’ data so inexact, that the impact of your purloined chicken dinner is negligible. “I’d be skeptical of any argument that stealing directly hurts the workers,” Woodman said.

Still, shoplifting from large chain stores is most likely not a good choice for you, Hungry. These companies invest significantly in security. A conviction is not only humiliating, it’s also a misdemeanor, which can saddle you with a criminal record for the rest of your life and keep you from getting a job. In some places, if you’re convicted of more than one misdemeanor, the second or third one becomes a felony, entailing serious prison time. Maybe we should revive autonomism—we have, after all, found ourselves in another worsening crisis of inequality—but meanwhile, please be careful out there.

I’m the token leftist in a white, center-right, middle-class suburban family. I’m childless, but I have two nieces, ages 10 and 12—my sister’s kids—whom I love to pieces. Over Thanksgiving, we all got together at my mom’s, where cable news is on more or less constantly in the common areas. As my sister’s family was scrambling to leave at the end of the weekend, I was watching footage of the protests in Chicago over Laquan McDonald’s murder. I noticed my 10-year-old niece watching over my shoulder. “Why are all the people walking in the street?” she asked. “They’re trying to make changes in the way the police do their job,” I said, “and when a lot of people walk in the street, people pay attention.” Then she had more questions: “But why are they trying to change the police?”

In the moment, I felt like there were a number of ways to talk about racism and police brutality to a white child, but I wasn’t sure what would be most developmentally appropriate. I also wasn’t sure how my conservative sister and brother-in-law would respond to my explanations, if I were to offer them.

“The police shot a young man 16 times, and people are upset about it,” I told my niece. She looked kind of aghast, so I quickly said, “Sometimes police officers can do bad things, but not all police officers are like that, and luckily we live in a democracy where the police work for the people.” At that point the family was ready to leave, so we said our goodbyes.

I later e-mailed my sister about it, and we had a good talk—my niece had a lot of questions about the police on the trip home, and her mom was glad to know where they were coming from. But honestly, I can’t help thinking that I didn’t do right here. I’m sorry that I distressed a little kid, and I also think I totally whitewashed what I believe to keep the spirit of the Thanksgiving family truce alive. In the future, what can I do to help my nieces encounter social and political questions honestly and meaningfully in a way that won’t piss off the rest of my family?

When my son was 3, we were detained on a Brooklyn bus while a young black man was arrested on the street outside. The next morning, back on the bus, we passed the same spot, and my son remembered, loudly: “Mommy, yesterday police arrested a brown man.” Embarrassed, I said nothing. Thinking I hadn’t heard, he helpfully turned up the volume: “Mommy, a brown man!”

I didn’t respond brilliantly in that moment. Like you, I worried about what other adults might think (we were the only white people on the bus). But that evening, we talked again. I observed that black men are arrested too often, that this is unfair, and also that we would never know that young man’s story. But my opinion was less important than showing my son that this was an important conversation, one that we could continue. And we have.

Diane Levin, a professor of early-childhood education at Wheelock College and the author of Beyond Remote-Control Childhood: Teaching Young Children in the Media Age, observes that you, Agonized, did the most important thing an adult can do when a kid raises a tough issue: You “responded in a way that made the child feel comfortable, so she kept asking questions.”

Next time, Levin suggests, ask her some questions, too: “Have you ever heard about racism?” or “What do you think the police could have done instead?” By focusing on her ideas more than yours, you’ll find out what she already knows and what she’s ready to discuss. You’ll also worry less about giving offense to her more conservative parents.

And yes, your niece is old enough for a more direct conversation about race. Not only was a young man shot 16 times, but this is something that happens often in the United States, especially to young black men. According to Howard Stevenson, a clinical psychologist and professor of urban education and Africana studies at the University of Pennsylvania, “a 10-year-old can definitely handle that.”

In a 2013 essay, Stevenson asked provocatively whether George Zimmerman’s parents could have done more to ease his irrational fears of black and brown youth. Perhaps if they had, Trayvon Martin would be alive today. Adults should always keep children safe, but we should not deceive them that the world is a safe place, nor that their feelings of safety are all that matter.