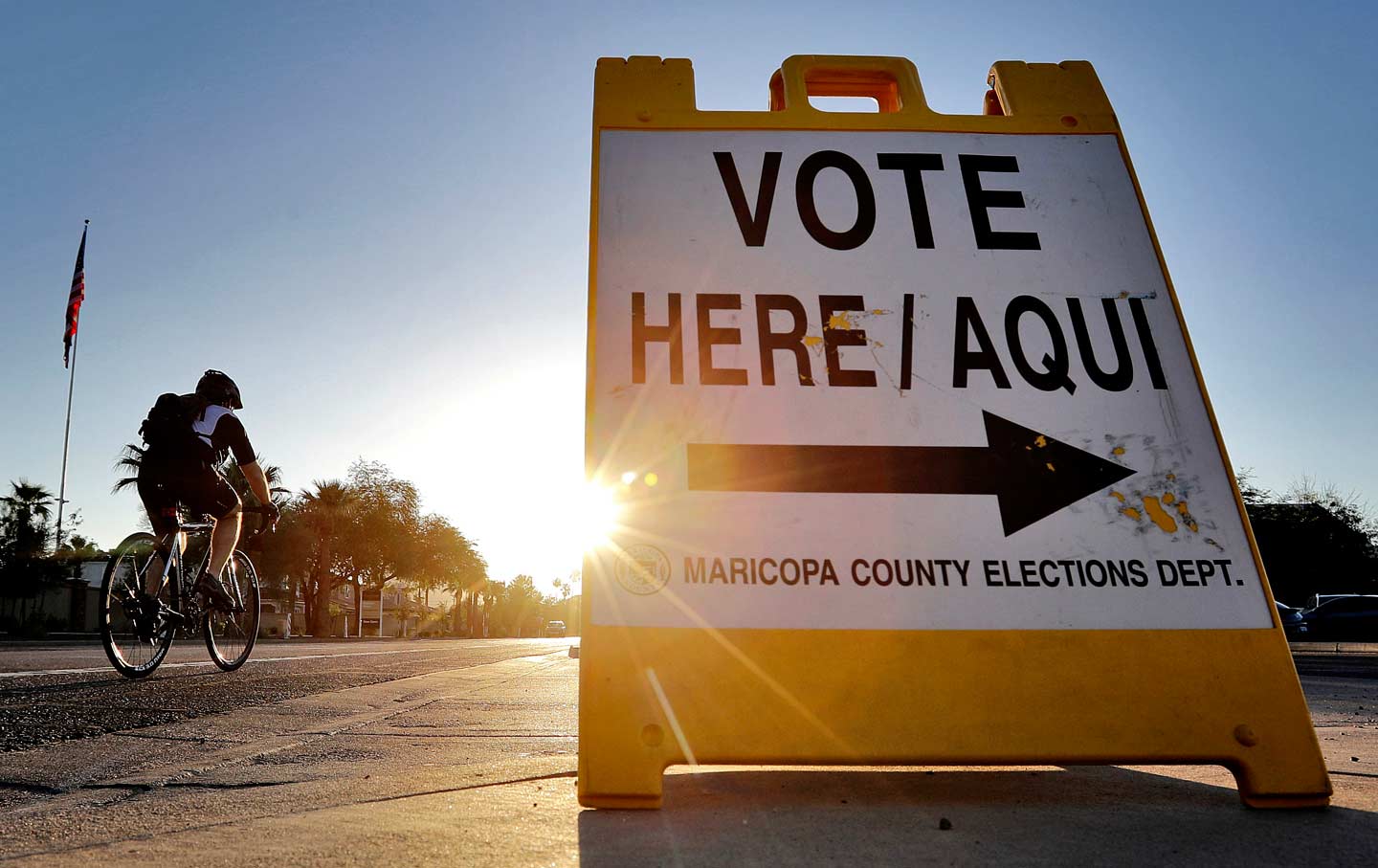 The uneven and unequal electoral structures of the United States—which allow local officials to set different standards for voting from jurisdiction to jurisdiction—have long been understood as a disaster waiting to happen.

In Arizona, on March 22, it happened.

Because of one local official’s stunning missteps and misdeeds, the state’s presidential primary voting turned into a fiasco.

Voters in Arizona’s largest county waited as long as five hours to cast votes. Polling places ran out of ballots. Television networks began calling primaries for front-runners (Donald Trump for the Republicans, Hillary Clinton for the Democrats) as voters were still waiting outside polling places. Voters who stuck it out actually found themselves casting ballots on the day after the election.

“It’s a national disgrace that people have to wait hours to cast a vote in any election.” —Bernie Sanders

“It’s a national disgrace that people have to wait hours to cast a vote in any election,” declared Vermont Senator Bernie Sanders, whose name was on the primary ballot that day.

The state’s largest newspaper headlined an editorial on the fiasco: “A five-hour wait to vote in Arizona primary? That’s shameful.”

Yet the official who was responsible for the mess, Maricopa County Recorder Helen Purcell, essentially said “oops” and refused to resign. The presumption on the part of many was that she would be above or beyond accountability.

That presumption may turn out to have been wrong, however.

Purcell is a Republican elected official. On Tuesday she faced her own reelection primary. And early Wednesday morning, The Arizona Republic reported that

Aaron Flannery, a human-resources consultant who campaigned on a promise to bring a “fresh pair of eyes” to the office, held a razor’s-edge lead over Purcell early Wednesday morning after trailing by an equally slim margin through much of Tuesday night.

Flannery, who ran a low-key and strikingly gracious campaign, was ahead by just 300 votes out of more than 250,000 cast. Thousands of early ballots and provisional ballots still must be counted. That will take several days. And if the race remains this close, a recount will be required. (A spokeswoman said Purcell would not be involved in the process, though it would be conducted by her office.)

Flannery ran more on the promise of efficient management than as a great voting-rights reformer. (While he said, “We should never restrict the locations or number of polling locations based on budgetary constraints,” for instance, he also said he supports voter-ID laws.) But Flannery did make long lines at the polls an issue. During the primary campaign, he said:

The disastrous Presidential Preference Election, incorrect ballots and the lack of a plan to enforce voting laws are all exclamation points on why I feel this office needs a fresh pair of eyes.

“If Purcell indeed loses the race, as Flannery predicted late Tuesday, it undoubtedly would be the result of voter anger over lengthy waits at the polls in Maricopa County earlier this year,” announced the Republic’s report on the primary.

Anger over the March primary has lingered. And it is appropriate.

The length of the lines for the presidential primaries did not provide a full measure of the crisis.

Parking problems were so severe at some voting locations in the Phoenix area that voters who pulled in with moments to spare were turned away when they finally made it to the doors of polling places where officials enforced a strict 7 pm cut off for joining the lines. “They turned a lot of people away,” Scottsdale resident Susan Pack, who made it just before the cutoff, told the Republic.

And, as is so often the case, minority precincts were hardest hit. Latino legislators noted that their districts had few if any polling places on Tuesday—despite the fact that the presidential race has focused on issues of profound concern to their communities. “In my district, there is only one polling place,’’ state Senator Martin Quezada, a Phoenix Democrat, complained. “In my neighboring district, LD 30, there are no polling places.”

By any and every small-“d”-democratic measure, things went horribly awry in Arizona on Tuesday. Advocates for democracy, be they Democrats or Republicans, liberals or conservatives, had every right to be outraged. And they had every right and responsibility to worry that what went wrong in March could again go wrong in November—when Arizona is likely to be a battleground state. They should also be aware that Arizona was not the first place where things went awry on a critical Election Day and that, unless changes are made at the local, state and national levels, it will not be the last.

At the heart of the matter is an issues that gets too little attention but that can be as serious a threat to voter participation as Republican moves in states across the country to enact restrictive voter-ID laws and to narrow the window for early voting: the manipulation of the number of polling places that are open on Election Day.

The Maricopa County Recorder’s Office is responsible for running elections in the sprawling jurisdiction that forms the largest county in the state and—with almost 4 million residents and 2 million registered voters in cities such as Phoenix, Scottsdale, Tempe, and Mesa—the fourth-most-populous county in the United States.

Since 1988, Helen Purcell, who has been the elected recorder.

Before the March presidential primary election, Purcell’s office reduced the number of polling places. A lot.

Democrats objected. Media reported that interest in the Democratic and Republican primaries was rising. Candidates arrived and held massive rallies, confirming the level of interest.

But Purcell did not budge.

“It saves a lot of money,” Elizabeth Bartholomew, an aide to Purcell, said of the decision to limit the number of polling places.

But the state’s second most-populous county, Pima (Tucson) decided to spend a little extra and organize a functional election. Pima County had 130 polling places open on Election Day. That was more than twice as many polling places as Maricopa County—despite the fact that Maricopa County had four times as many voters who were eligible to vote in presidential primary.

While other counties tried to accommodate voters, Arizona’s largest county created chaos. “Most counties surveyed by The Arizona Republic had enough polling places to average 2,500 or fewer eligible voters per polling site, Maricopa County had only one site per every 21,000 voters,” the paper reported as the presidential primary chaos unfolded.

The dramatically smaller number of polling places created all sorts of confusion in Maricopa County—as voters arrived at their usual voting locations, found them closed, and were told that they could go to any of a number of “regional” polling places. As voters raced around the county to find a place to cast a ballot, the clock ticked toward 7 pm, the cutoff for getting into lines so long that eligible voters were still waiting when Trump and Clinton were declared winners. The network calls may have had some small impact on the percentages attained by various candidates, and the overall chaos may even have influenced delegate allocations on the Democratic side. (Republicans held a winner-take-all primary). But the bigger concern was with the steps taken by local officials that created a confusing and complicated Election Day for voters in the fourth-largest county in the United States.

Elvia Diaz-Manzanarez, an editor at La Voz Arizona, summed things up during the presidential primary chaos. “It is no coincidence many poor and predominantly Latino areas didn’t get a polling place. Purcell and her staff figured few of them vote anyway. She just decided to discount them. Really. Let’s be clear. This mess affected all voters in Maricopa County, not just minorities.”

“Waiting in line for hours to cast a ballot is not acceptable. Writing off voters regardless of previous voting patterns is not acceptable,” wrote Diaz-Manzanarez, who asked the essential question: “Are we going to see the same in November?”

That was not just an appropriate question to be asked with regard to Maricopa County or Arizona—where steps have been taken to try and protect against a repeat of the March fiasco. This is a national issue. As the Brennan Center noted after the 2012 presidential election: “Exceptionally long lines were not isolated to a single city or state.”

Local officials should have some leeway to make it easier to vote: by increasing the number of polling places, improving procedures, expanding early voting and expanding education about how and where to vote. And when officials act in ways that harm democracy, they should be held to account—as may be the case with Maricopa County’s Helen Purcell.

But there must be minimum standards for polling-place access nationally—standards that apply in every state and every jurisdiction. Without them, long lines and flawed practices become a threat to the promise of democracy.

“As the world’s leading democracy, the American voting system must be free, fair, and accessible. This nation was founded on the principle that all are ‘created equal.’ Every citizen has a responsibility to vote on Election Day,” noted Lawrence Norden in his 2013 Brennan Center report “How to Fix Long Lines.” “But it is the government’s responsibility to make sure the system works efficiently for those who exercise this responsibility. Those who take the time to participate in democracy are owed at least that much.”