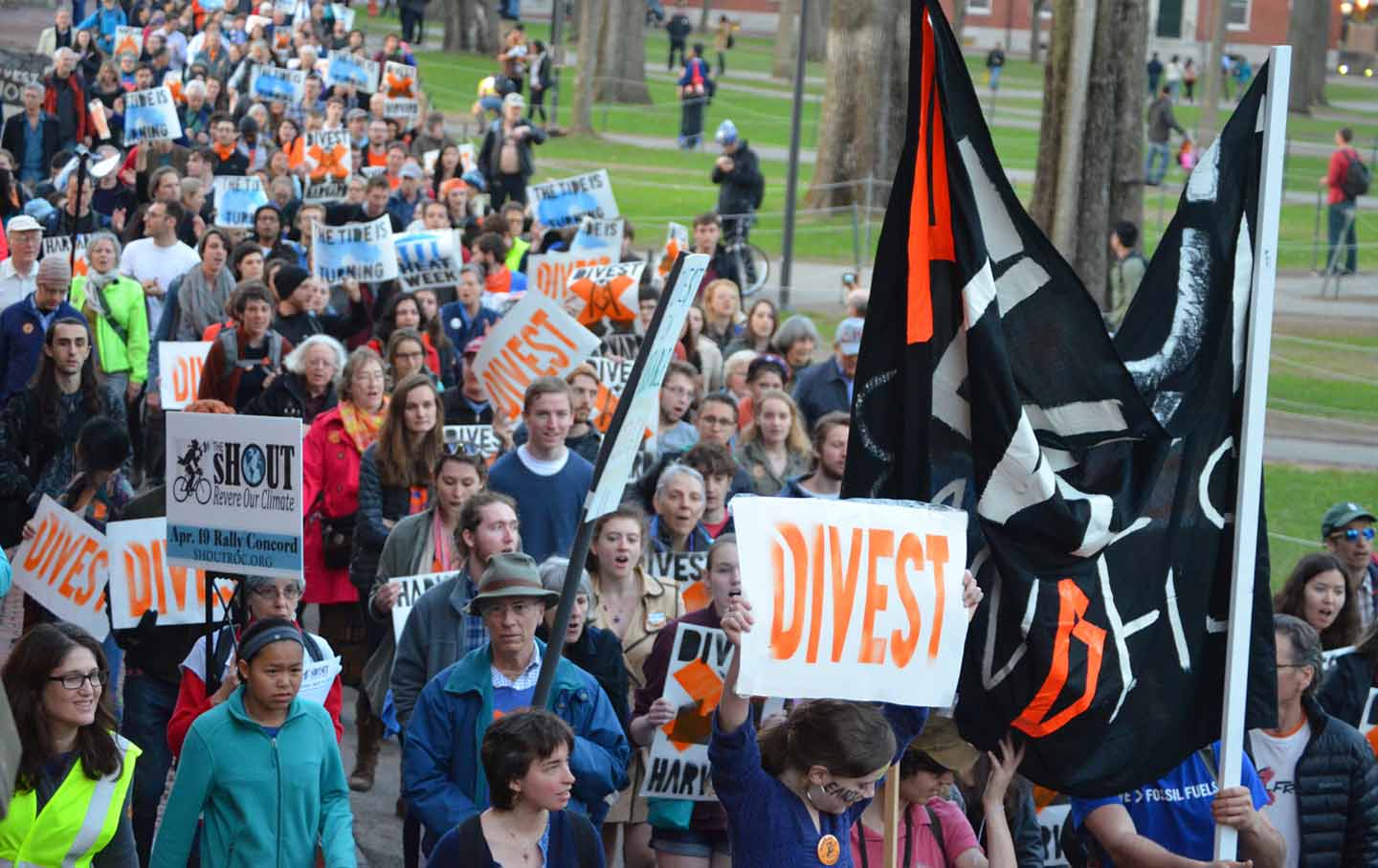 Universities are wonderful places. They are centers of learning, thinking, and social experimentation, and at least some of them prize truth for its own sake. They are also one of society’s special tools for solving problems. Climate change is one such problem, and university researchers have advanced our understanding of climate greatly in the past few decades. But today, when the task at hand is not just to learn about climate change but to address it, are universities helping or hurting?

Consider the following. The Intergovernmental Panel on Climate Change estimates that, in order to meet climate goals, around $100 billion needs to be divested from the fossil-extraction business globally every year for the next two decades. This movement of investments is not a sideshow; it’s central to fixing climate change. Yet many high-profile universities, including Harvard, MIT, and the University of Toronto, have consistently rejected this path. Moreover, some universities are investing new capital in oil and gas exploration and production.

The disconnect between rhetoric and action suggests that something is not clicking in the minds of the current crop of university presidents. These administrators are eager to give speeches about climate change, but at the same time they refuse to draw down their investments in fossil fuels—even when this is exactly what’s been prescribed by experts. University presidents’ defense of the status quo is so pervasive that the website run by the Independent Petroleum Association of America to urge against divestment is plastered with quotes not from oil magnates but—you may have guessed it—university presidents.

Understandably, oil and gas companies don’t want the world to stop investing in them. But somewhat surprisingly—and much to the dismay of students and professors—these companies are finding allies among university presidents and trustees.

So universities are urging the world not to change in needed ways. But this isn’t all. Strangely, they are also giving political cover to the fossil-fuel industry. In 2013, for example, a Harvard trustee infamously told students that, rather than asking Harvard to draw down its investments in fossil fuels, they should instead “thank BP” for its renewable-energy work. The spoiler is that while there may have been renewable-energy work going on at BP 30 years ago, today there isn’t much.

To distract from their intransigence, university presidents are promoting “solutions” that are straight out of the diversion-tactic handbook. Harvard’s President Drew Faust promotes the dictum that we shouldn’t move investments away from the fossil-fuel industry; rather, we should just keep doing research. The problem is that learning more about climate change is not the same as fixing it. As long as our response is limited to research, the fossil-fuel industry has little to worry about. The tobacco industry knew this, too, as it promoted research as a strategy to undermine and divert attention away from policy action.

University presidents are promoting research as the solution to climate change. But they’re not even following through on their own rhetoric. For example, Harvard now buys its green credentials by disbursing to itself $1 million in climate-related research grants each year. But consider that Harvard already spends on the order of $1 billion per year on research—much of which could be construed as climate-related, given the all-encompassing breadth of climate change. So when faced with one of the gravest threats civilization has ever encountered, what does Harvard do? Well, apparently it increases its research budget by 0.1 percent! Other universities are following Harvard’s underwhelming lead. The University of Toronto,  after rejecting the mildest form of divestment imaginable, established a three-year research fund of $250,000 per year, which again appears to be only about a 0.1 percent boost of its research spending.

Universities are downplaying the seriousness of climate change in a big way. In a recent interview in which she was pressed on fossil-fuel investment, Harvard’s President Faust argued that, unlike apartheid and cigarettes, fossil fuels are not “so heinous that we want nothing to do with it.” This only makes sense if you don’t think about it. Cigarettes addict and kill their users. Fossil fuels have the capacity to cause drought, famine, war, the destruction of Earth’s major cities, mass extinctions, the spread of diseases, and so on. The administration of McGill University downplays climate change as merely “a source of stress for human and planetary well-being” and minimizes its concern further by proclaiming that it’s “unconvinced that grave injurious impact resulting from the activities of…fossil fuel companies…has occurred at this time.” The McGill administration even claims that it is “persuaded that the beneficial impact of fossil-fuel companies offsets or outweighs injurious impact at this time.”

Just as the world is coming to its senses about climate change, agreeing in Paris to take the necessary steps to fix it, universities are strangely obstructing progress. They refuse to move their money out of fossil fuels, even when they can. They give cover to the fossil-fuel industry and make bogus arguments to divert attention away from it. And they downplay the seriousness of climate change when it comes time to act.

The question is—why? And what will it take to get universities to change?