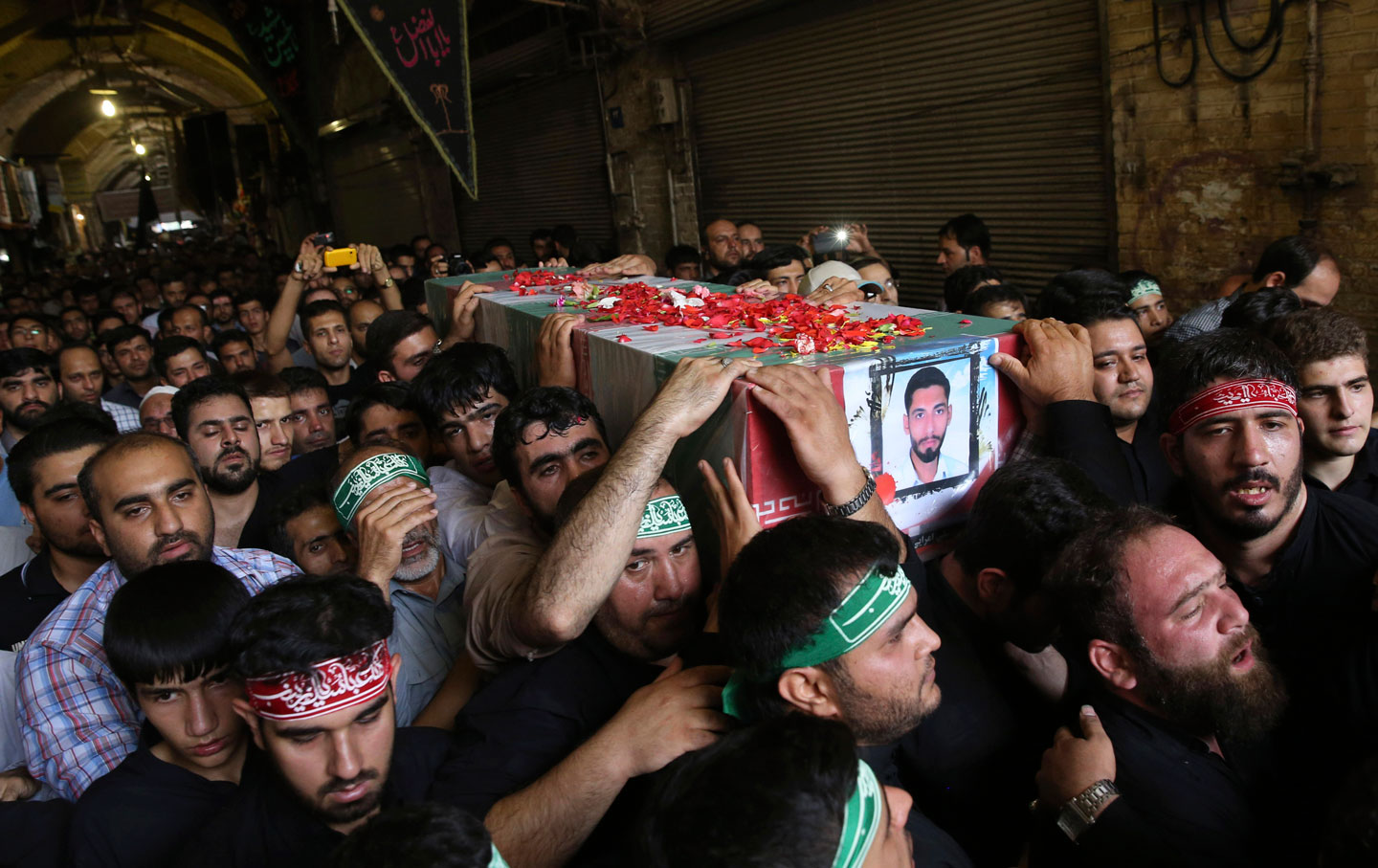 Iranian mourners carry the coffin of Ali Amraei, who was killed in fighting against Islamic State extremists in Syria, during a funeral ceremony in Shahr-e-Ray, Iran, in June 2015. (AP Photo/Vahid Salemi)

This summer’s long battle for Zabadani in Syria continued this weekend, with a difference. Some reports suggested a decisive Iranian troop intervention. Only partisan news items are coming out of the key frontier town near the Syria-Lebanon border, and they don’t exactly agree with one another. Iranian outlets maintain that Hezbollah and the Syrian Army penetrated into the center of Zabadani on Monday, taking a major mosque, destroying a rebel arms depot, and confining the Al Qaeda–affiliated Support Front fighters and their allies to a square kilometer of the town. A prominent Iranian newspaper proclaimed that 20 terrorists had been killed and 30 wounded on Monday. What is different this time is the assertion that Iranian troops, and not just advisers, are on the ground, fighting. As Russia offloads new tanks and its own troops for the regime of Bashar al-Assad, are Tehran and Moscow doubling down by involving their own militaries?

It was on July 3 that Hezbollah’s campaign to take Zabadani away from the Support Front began. It has involved a hard slog into a rugged area of Syria by the Lebanon-based Shiite party-militia. By late August the fighting had reached a stalemate and there was a brief truce, which quickly collapsed. This week, Hezbollah, the Syrian Arab Army, and a rumored force of Iranian Revolutionary Guards engaged in fierce fighting with the Al Qaeda guerrillas again, with both sides claiming advances.

This week it was reported that there are now 200 Russian Marines at a forward airbase near Latakia in Syria’s northwest, and that massive arms shipments to it are being delivered from a base in southern Russia through Iranian and Iraqi airspace. With regard to the fighting on Lebanon’s border, Israel’s Yediot Aharonot, according to BBC Monitoring, reported last week that Russia and Iran are coordinating a joint troop escalation in Syria and that Iran has recently sent several hundred fighters of the Revolutionary Guards Corps to wage war alongside Hezbollah in Zabadani. On the other hand, the liberal Lebanese newspaper Sada al-Balad, edited by a Christian, seems to want to argue that Russian and Iranian troop presence in Syria is being exaggerated by the rebel and Israeli press in order to gain propaganda points and undermine Damascus.

Zabadani, a largely Sunni town before the war of some 30,000, nestles in a green valley surrounded by 3,000-foot-tall mountains. Near the Lebanese border and northwest of Syria’s capital of Damascus, it lies athwart supply and smuggling routes vital to the Shiites of Lebanon. Further, that it fell to Syrian Al Qaeda caused it to be viewed as a security risk not just by Hezbollah but also by Christian and other Lebanese. Since 2012 it has changed hands more than once.

The Russian government’s Sputnik radio service announced early Tuesday morning Moscow-time that the battle for Zabadani was in its last moments, with some 350 rebel fighters now surrounded. It said that in recent days 240 had surrendered to the Syrian government, and some had switched sides to fight for Damascus. It further asserted that one of the rebel groups at Zabadani, Zahran Alloush’s Army of Islam, allegedly supported by Turkey, understood that a Syrian government victory in the beleaguered town was now assured, but continued fighting in hopes of another ceasefire that would allow them to escape. (The Army of Islam is made up of hard-line Salafis who admire Saudi Arabia’s Wahhabi state; it is not Al Qaeda but is willing to ally pragmatically with the Support Front.) If these allegations sound like war propaganda, that is no accident, though it cannot be ruled out that they contain a kernel of truth.

In contrast, Al Jazeera’s correspondent in Beirut reported five Hezbollah fighters dead at Zabadani this weekend and at least 100 since the beginning of the offensive in July, giving no details of the current battle, but apparently attempting to hurt Hezbollah morale with the claim of large numbers of casualties this summer. Another Al Jazeera article maintained that there had been no decisive victory yet in Zabadani, but that in any case the capital of Damascus was under siege again. The London-based pro–Muslim Brotherhood al-Araby al-Jadeed, said to have private funding from Qatar, depicted Alloush’s Army of Islam as having gained a series of victories just outside Damascus this week, and said it was foiling the Russian and Iranian plot to shore up the Assad regime.

A regime/Hezbollah victory in Zabadani would be a huge morale-booster for the Assad forces, given the losses of the towns of Palmyra and Idlib in recent months and a perception that the rebels, whether Daesh (ISIS, or Islamic State) or Al Qaeda and its allies of convenience, have the momentum in the long civil war. The reports coming out this week are too contradictory and murky to allow a firm conclusion that that is what has happened. For Damascus, in any case, there is a danger that Russian and Iranian troops aiding the Assad regime will be perceived by Syrians to be turning into an alien military occupation. Rebels on the Sunni and Salafi side have been making this argument for some time, but a large, visible troop presence from the two countries could finally give that propaganda some purchase among the public huddled in towns along the country’s west (although so far, many Syrians are more afraid of Daesh than they are of Tehran or Moscow). If Iranian forces really have become significant to the outcome at Zabadani, foreign intervention may have begun dictating the course of the civil war. The alleged Russian buildup near Latakia could be even more momentous, if it materializes. There was that moment in 1965 when US military advisers in Vietnam were turned into regular infantry fighting a faraway war. Through the fog of war, and without being able to discern anything clearly, we may be glimpsing a new stage in the Syrian struggle, one in which Russia and Iran risk their own Vietnam.