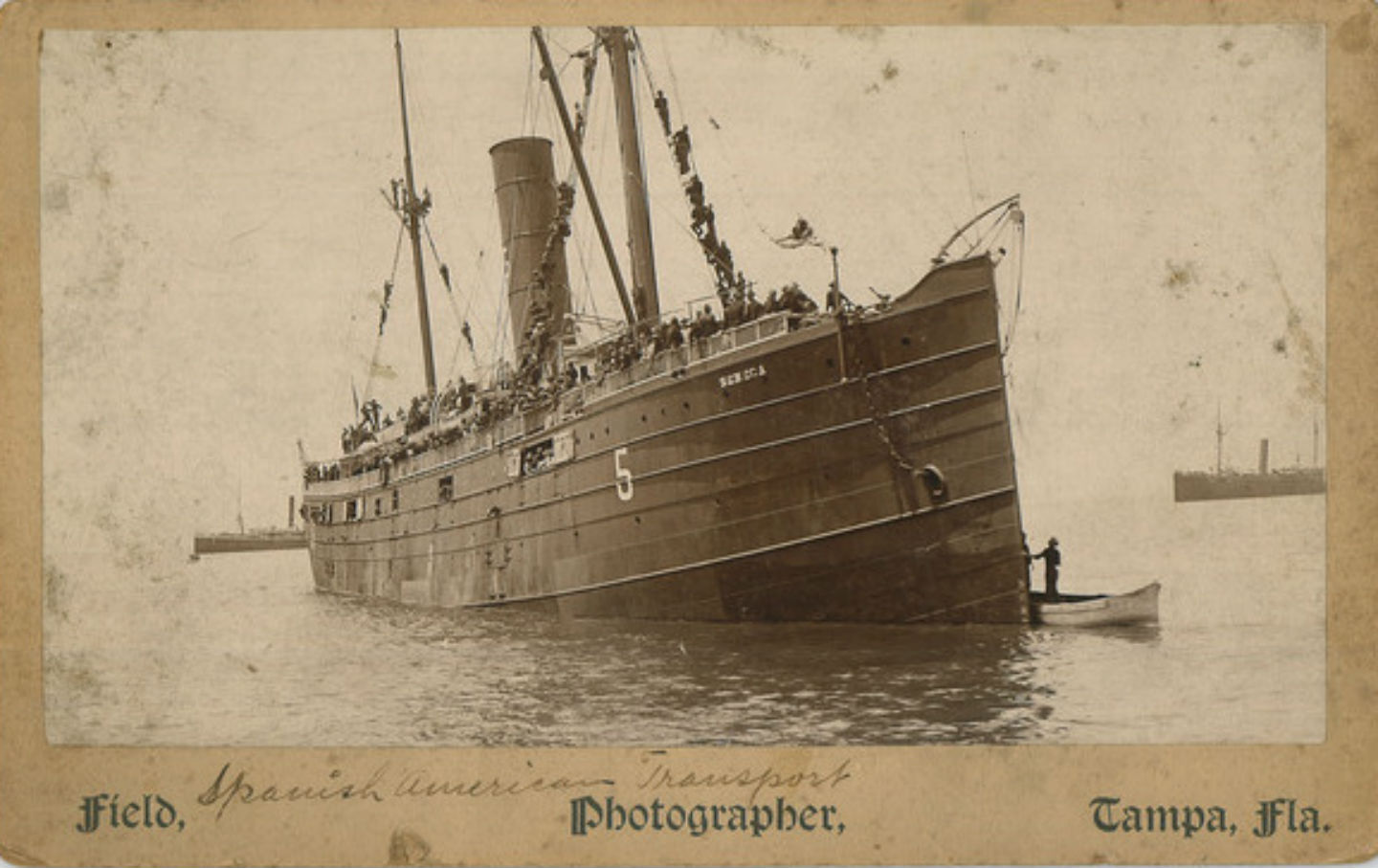 A postcard of the American transport ship, the Seneca, which carried troops to Puerto Rico and Cuba during the Spanish-American War. (Wikimedia Commons)

The Nation was vigorously opposed to war with Spain, and, indeed, to all expressions of American imperialism and expansionism (including the annexation of Hawaii) during this crucial decade in American history. Once the war began and spread to the Philippines, the magazine strongly opposed the anti-insurgency campaign, noting (with strong implications for more recent US adventures abroad): “Whenever a small force of Americans undertakes an expedition, the woods and hills become alive with enemies.” In an editorial, “War or Peace” (April 21, 1898), The Nation’s founding editor E.L. Godkin took aim at the “yellow” journalists who bullied the country into war. It could have been written in 2003, about those favoring the American invasion of Iraq, or today, about the chickenhawks trying to sink the Iran deal and involve the US in yet another unimaginably costly war.

When the fighting begins, we must only hope that it will be short, sharp, and decisive. We are still of opinion that the dispute might have been ended—nay, may still be ended—without fighting at all. We could have tried the plan of autonomy which the Spaniards have offered to concede by perfectly peaceable means. The objection which has been made to this is, that the Spaniards cannot be trusted to keep their promises; that in four or five years they will withdraw what they concede, as they have often done before. The answer is that they have never before promised the withdrawal of the their troops as part of the reform, and that they would find it impossible to go back to their old ways without soldiers. Moreover, it is, as we have often said, never too late to go to war. We could fight them just as well after they had broken their promises as now, if not better. What prevents our trying the autonomy plan is, in a very large degree, the desire of some of the Jingoes for a war, as one of them has said, “just or unjust, necessary or unnecessary, right or wrong.” This is a painful concession for a civilized nation to make, but it must be made. It is an inevitable inference from the proceedings in Congress and the conduct of a portion of our press. It is the conclusion which the world at large now draws and which history will draw…. When one thinks of the blowing, the blatherskite, the mendacity of the most widely read portion of our press, of the steady fire of the lowest insults kept up against an adversary with whom we meant to engage in honorable, civilized warfare, by the Legislature of the nation, one involuntarily asks, Are there no gentlemen left in in American public life? We wish we could add that, now that we are approaching the stern arbitrament of war, we believe that lying will cease or diminish. But we can hold out no such prospect. War is preeminently a state of things in which all human vices flourish or are encouraged, especially the vice of mendacity. We must be prepared for its exhibition on a greater scale than ever before witnessed by mankind, incessant, monstrous, and perfectly shameless.

Why the Trumpists’ Calls for Dictatorship Should Worry Us