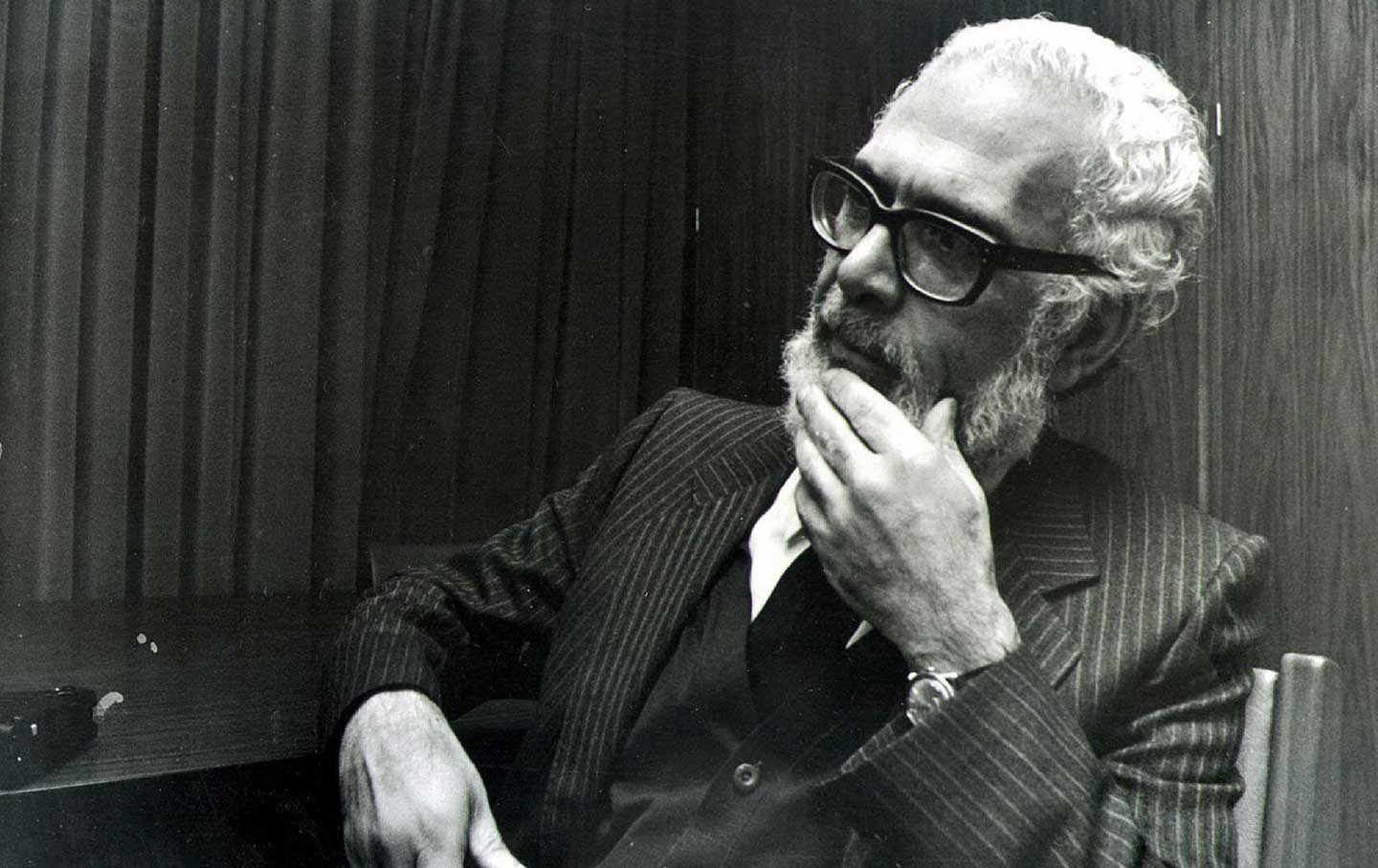 “Maybe everything depends…on where you’re born,” a character in the Argentinian writer Antonio Di Benedetto’s first book Mundo Animal (1953) reflects, “and the inadequacy of destiny that follows from that.… Maybe I should have been born somewhere else.”

It’s an expression of forlorn longing that many provincials would recognize, and one that was certainly shared by its author. Born in 1922 in Mendoza, an Andean town in west-central Argentina, Di Benedetto grew up far away from his country’s cultural centers. Interestingly, he chose to remain there, embracing regionalism at the time when his major contemporaries—Borges and Bioy Casares in Buenos Aires, Cortázar in Paris—were writing deliberately internationalist fiction. It was a decision that cost him.

By all estimates, Di Benedetto was a talented writer. A jury headed by Borges awarded the Kafkaesque short-story collection Mundo Animal a national prize, and Zama (1956), his debut novel, likewise received much critical praise. Nevertheless, the books never took off among the wider public. Sales were very poor and, though not totally obscure, Di Benedetto remained in the provincial shadows as the so-called “boom” introduced a generation of extraordinary Latin American writers to the world. When he finally received public attention two decades later, it was of the worst sort.

In 1976, a few hours after they overthrew Isabel Perón’s government, Jorge Videla’s thugs arrested and imprisoned Di Benedetto—which made little sense, since he was politically conservative. Eighteen months of torture and four mock executions followed before he was finally released. Di Benedetto then immediately went into exile in Spain, and only returned to Argentina in 1984, a year after the war ended. He continued to publish throughout this time—stories, novels, screenplays, journalism—and received many awards. But he still never came close to achieving conventional literary success. When he died in 1986, as Esther Allen notes in the introduction to her exquisite, new, and much-belated translation of Zama, “only a handful of people anywhere would have declared [him] to be a major figure in twentieth-century Latin American literature.”

But he certainly was, if this book is anything to go by. What’s more, he reads nothing like his celebrated contemporaries. Compulsively internal, un-operatic, claustrophobic yet funny, and lyrically restrained, Zama is a strange historical novel that is closer in spirit to Nausea and Waiting for the Barbarians than to Hopscotch or One Hundred Years of Solitude. Exile, failure, the dread of erasure: Di Benedetto seems to have transmuted all his life experiences into the book. Which makes it all the more remarkable, since he wrote it decades before Videla’s henchman arrived.

Don Diego de Zama, the eponymous narrator of Di Benedetto’s novel, is a Spanish Asesor Letrado (legal counsel) stuck in the margins of empire. It is the late 18th century, and like any ambitious colonial, he longs to work in Spain, or at least cosmopolitan Buenos Aires. Instead, he is suffering a punishment posting—a form of exile, really—in Asunción. A transfer isn’t in sight. Zama is also estranged from his family. His wife and children live in rural Argentina; there isn’t enough money to bring them north. Lacking meaningful work, professionally strung out, and socially isolated, he has retreated into his mind. Which, as we shall see, is the biggest problem.

Zama opens with its narrator at Asunción’s dock, awaiting a ship that does not arrive. He finds something else in the water:

A dead monkey, still whole, still undecomposed, drifted back and forth with a certain precision upon those ripples and eddies without exit. All his life the water at forest’s edge had beckoned him to a journey, a journey he did not take until he was no longer a monkey but only a monkey’s corpse. The water that bore him up tried to bear him away, but he was caught among the posts of the decrepit wharf and there he was, ready to go and not going. And there we were.

There we were: Ready to go and not going.

Two things happen in this passage. First, Zama makes a subconscious connection: He identifies his stranded self with the dead monkey. Then, almost immediately, he analyzes it (“and there we were…”). Unlike the chilling and exact visual recognition, his analysis of it is vague and sentimental. By over-explaining his metaphor, Zama undercuts his emotion. He moves from feeling to self-pity, from experience to performance (the royal “we” is an especially good touch).

This bout of private sentimentality reflects a general tendency of his. Zama has a neurotic compulsion to simultaneously live and comment upon his own life. He is always presenting his experience to an imaginary audience, giving it coats of false meaning—we are all, to an extent, guilty of this—as if reality weren’t enough. Paradoxically, that is what prevents him from grasping the severity of his situation. Instead of responding to his intuitions and desires, he over-analyzes them away.

In this case, the consequences are minor. But trouble comes when the stakes are raised.

Zama is divided into three time-stamped sections—1790, 1794, 1799—with trapdoor-like section breaks that hurtle our hero through time. At each juncture, Zama faces a serious problem: first sexual, then financial, then existential. And each time he willfully (but vainly) indulges sentimental misinterpretations of it. If the structure is reminiscent of a fable, the drama itself is all too real.

The first and longest of these sections concerns Zama’s tortured, comic, occasionally touching, and largely chaste affair with a white woman (he refuses to touch mulattas, let alone natives). Zama trots out numerous theories to glorify his preoccupation with Luciana, whom he has little real interest in. But the truth is simple: He is sexually deprived. He never acknowledges this, of course, and so wastes his days mired in unacknowledged but mounting erotic agony. Farce turns into tragedy when, in a funk of sexual frustration, Zama insults Asunción’s colonial governor, a truly disastrous decision because the latter has just been elevated to the Spanish court. In a moment, he “has lost the most prestigious advocate [he] could have in Madrid.” There goes the much-desired transfer. To make matters worse, he gambles away his savings the next day. This sets the tone for the following sections, which follow a similar logic—a straightforward problem, romanticized, over-analyzed, and ignored, suddenly snowballs into disaster—though they unfold in different realms.

The second section, like No One Writes to the Colonel, is a painfully intimate study of growing penury—in both cases, the government stops paying the protagonist’s salary—and the abstract delusions of “dignity” that men will indulge so as to not confront it. The third section is a neurotic variation on the Heart of Darkness narrative. By this point Zama is financially impoverished and more or less deranged. In a doomed quest for redemption, he signs up for an expedition into native territory. Terrifyingly beautiful passages of bloodshed ensue. Also terrifying is the fact that Zama’s self-consciousness and intellectualizing only increases with the physical dangers that confront him. At the novel’s opening, he couldn’t recognize the chilling banality of his circumstances; now can’t accept its chaotic terror. Here he is waking up the day after a battle near the novel’s conclusion:

It seemed as if no more than two men drew breath across the whole crust of the earth: the captain, tied up at my feet, and I, with my hands bound, observing him, as if he were not himself, as if feelings were not possible, as if the possible were not possible.

Zama is facing a beheading, but his language suggests that he’s dying of alienation. And in a sense, he is. It is only because Zama never escaped the prison of his neuroses that he fell into such a perilous situation. The existential and physical dramas of his life have finally converged.

The conflation of reality and fantasy has long been a major theme in Latin American literature. It plays a central role in the work of Donoso, García Márquez, Asturias, Puig, and even contemporary writers like Horacio Castellanos Moya. Diego de Zama, however, suffers a unique strain of this malaise. Zama tries to ignore reality by indulging fantasies: of love, honor, military greatness. But he is too self-aware—he is neurotically self-aware—to give in to them. He thus ends up with the worst of both worlds: the calamities of fantasy, and the continuous, ambient disappointment of a romantic confronted by real life. As Esther Allen elegantly puts it, Zama is “a would-be magical realist who can’t quite extricate himself from reality.”

There might be a social explanation for his condition. In an essay on Dostoevsky, Orhan Pamuk observes that the narrator of Notes From Underground felt that “excessive self-consciousness—or, indeed, any form of consciousness—was a type of illness.” Pamuk explains this as “the jealousy, anger, and pride of a man who cannot make himself to be European.” Antonio Di Benedetto admired Dostoevsky to such an extent that he claimed to have been “invented” by the Russian. I suspect this affinity owes to their mutual experiences as prisoners of Western culture.

Zama is keenly aware that his aspirations—to sleep with a white woman, to live in Madrid, to achieve military distinction—have all been inherited secondhand. Though he is white, he is an Americano: a Spaniard born in the colonies, and thus not a true Spaniard (just as Dostoevsky was white but not true European). His neurotic self-consciousness, I think, results from this existential split. Neither can Zama embrace a provincial lifestyle with any sincerity, nor can he aspire to European refinement without the knowledge that he is aspiring. And so, for his brief and terrible life, he hovers in the chasm between these two worlds. Then he falls into oblivion.