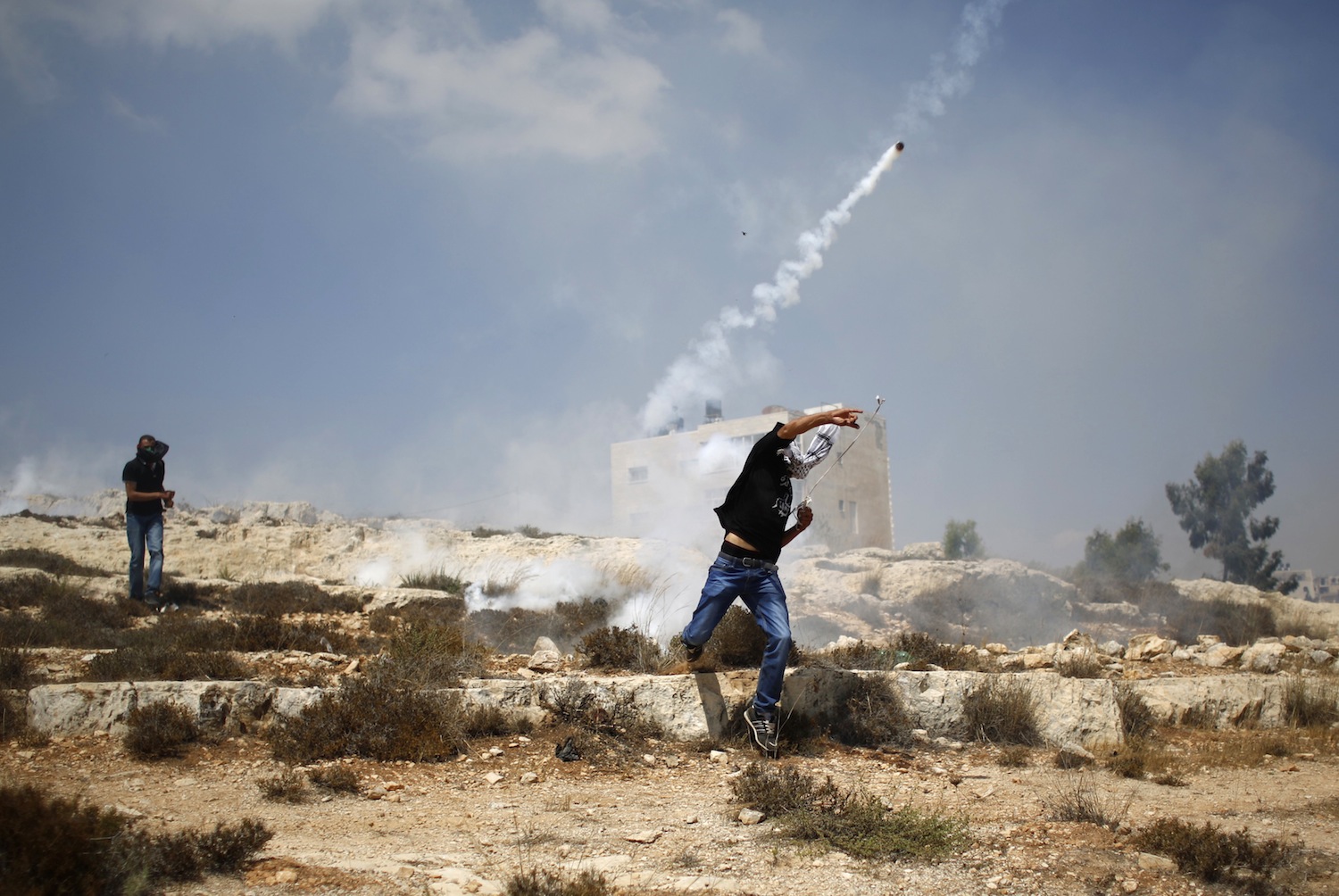 A Palestinian protester throws back a tear gas canister fired by Israeli troops in the West Bank village of Rafat near Ramallah. August 2, 2014. (Reuters/Mohamad Torokman)

Ramallah, West Bank—The bullet was still lodged in Ahmad Kittaneh’s right lung when he arrived at Ramallah Hospital late on a Thursday night. The 22-year-old went into cardiac arrest twice, but miraculously pulled through after having been shot by Israeli soldiers at the Qalandia checkpoint, which separates the West Bank from Jerusalem.

On July 24, about 10,000 Palestinians, many of them young men like Kittaneh, turned out in full force to show solidarity with their Gaza compatriots who had been pounded by Israeli artillery for approximately three weeks. Today Gazans are breathing a sigh of relief as a three-day Egyptian-sponsored truce appears to be holding up, while Cairo talks to Palestinian and Israeli delegates separately on ways to end the war.

The July 24 demonstration, which appears to have been the largest since the second intifada, included Palestinians from all walks of life– elderly men, women with strollers, people in wheelchairs. They marched from Al Am’ari refugee camp in Ramallah towards Qalandia. Many had Palestinian flags in tow, but the factional banners of Hamas and Fatah were largely absent. The march was eventually met with Israeli fire.

Kittaneh was one of three critically injured that day—the other two were separately shot in the left eye and right atrium of the heart—but his close encounter with death seems to have not deterred him. “I would go back to protests again,” said Kittaneh, who studies journalism at a university near Jerusalem. “This is a national duty for every one of us.”

Kittaneh’s ordeal started a few days prior to the shooting, when he, along with several other young men, tried to march to Beit El, the Israeli military compound on the outskirts of Ramallah. There, he was met with another force—Palestinian Authority (PA) security—which Kittaneh said “showered” protesters with tear gas and stun grenades, driving them away from the military base.

“The only time I ever get tear gassed is—ironically—at the hands of the PA forces,” he said. “I tried to reason with these guys, tell them that there’s nowhere else for people to go to vent their anger, but they weren’t listening.”

The PA’s relationship with its constituents here has become strained over the years as encounters like Kittaneh’s have increased. Security forces have tried to stop frustrated Palestinians from approaching Israeli military outposts or checkpoints many times, often with brutal force.

But despite these efforts, protests fuelled by anger over Gaza’s ordeal have continued, and, in the last few weeks, become an almost daily occurrence. Multiple different demonstrations are taking place from Hebron in the south to Nablus in the north—a big jump compared to three months ago, or compared to the past few years of relative quiet in the West Bank.

In the last two weeks, three separate attacks on Israelis took place in the West Bank and Jerusalem, and two Palestinian men participating in separate protests in villages near Tulkarem and Ramallah were shot dead. These skirmishes, coupled with the massive protests that Kittaneh took part in, have left many wondering if they were witnessing the beginning of a formal Intifada—or if the uprising would just patter out over time.

“What I saw the other day were people finally rising up,” Kittaneh insisted. “The numbers were huge. I don’t think we can go back from this.”

While the immediate motivation for these flare-ups may be the Gaza bombardment, it’s undeniable that a change in West Bank dynamics has also played a major role. With the temporary trappings of a quasi statelet slipping away—the peace process at a standstill, economic stagnation setting in—the only part of the window dressing that remains are the PA’s security forces whose main job, as far as regular Palestinians are concerned, is to protect Israel. This harsh reality has been in stark relief since Palestinian Prime Minister Salam Fayyad left office roughly a year ago.

“People are coming to the conclusion that maybe what was taken by force cannot be returned except by force,” said Mazin Qumsiyeh, a Bethlehem-based activist and university professor. “There has been significant upheaval and anger. It’s hard to determine the future, but the Palestinian psyche is changing, and we may be closer to a revolution against the PA, which is needed as well.”

As it stands today, the resurgence of an Intifada may prove difficult precisely because the PA is acting as a bulwark against the very people trying to kickstart it.

“The PA security forces should not be stopping people from participating in protests and expressing themselves,” said Qadura Fares, a former PA minister and high-ranking Fatah official who works on prisoner advocacy. “What’s happening in Gaza is big, and trying to curb people will not serve the PA. This is a lesson learned and the PA security forces are acting based on that.”

Indeed, the Palestinian leadership has even called for some protests to take place, holding a “Day of Rage,” from which security forces were noticeably absent, a telling indication of the PA’s efforts to use these protests to its advantage without letting them spiral out of their control.

“I think [the PA] is in an especially acute dilemma now,” said Nathan Thrall, a Jerusalem-based senior analyst at the International Crisis Group. “On the one hand, they don’t have room to suppress these demonstrations, and on the other, they desperately don’t want them to grow because they feel like they will be their first victims.”

Even PA President Mahmoud Abbas’ rhetoric has steadily changed from stressing the “sacredness” of security coordination with Israel, to leading a PLO meeting that hailed the “forces of resistance fighting heroically against the occupying army,” to then citing a Koranic verse that addresses the issue of permitting fighting for those who are wronged.

“The tensions between the public and the PA have been greatly exacerbated by the Gaza war so much so that you have seen a shift in rhetoric from the [Palestinian] leadership,” Thrall said. “I don’t think it reflects any change in their conviction, but it shows their estimation of where the public is and how they need to accommodate.”

Since Fatah (which makes up a bulk of the PA) and Hamas formed a single agreed-upon government, the PA has come under fire for lack of a united front with the Islamist group and for not mobilizing the West Bank to act in light of the Gaza offensive.

Neither group was faring well prior to this war: Fatah’s close association with the PA left it with a legitimacy crisis, while Hamas was reeling from funding shortages and the choking siege imposed by Israel and the new Egyptian regime.

But for now at least, Hamas seems primed to fill the void left by the beleaguered PA. And even though both Abbas and the Islamist group’s leader Khaled Mishal have spoken about Gaza, the latter has come off as the more genuine of the two.

For now, the Islamist group’s use of “armed resistance” has won hearts and minds over the PA, which is seen to have largely sat on the sidelines. Even in the West Bank, Fatah’s stronghold, Hamas seems to be faring better—according to a recent poll—for the first time in many years.

Ultimately, Israel’s military offensive has pushed Palestinians in the West Bank and Gaza Strip together—at least for the time being. And if the geographical and political schism between the two had anything to do with the West Bank’s lack of mobilization, then these reasons don’t seem to hold up either, leaving the door open—in principle at least—for a more galvanized, resurgent movement. Whether it will materialize is one thing, but some believe Palestinians are possibly approaching a tipping point.

“We’re closer to a popular uprising than at any point over the past few years,” Fares said. “But we need to keep in mind that for now, these intifada-esque acts are linked with what’s happening in Gaza at the moment. For a sustainable uprising, there needs to be a strategic, organized planned undertaking by all factions, not just reactionary acts.”