In 1964 the British novelist Ann Quin gave an extended interview about work, sex, relationships, men, and patriarchy to playwright and fellow Brit Nell Dunn for Dunn’s collection of interviews, Talking to Women. Quin and Dunn were in their late 20s and were struggling with the stodginess of respectable society. Dunn, who was married with children, admitted to wishing she lived like Quin, saying, “I feel a sort of envy for your freedom, this freedom of having a place and having time and space.” To which Quin, who lived alone in a lodging house, replied, “But is it freedom?”

Quin said she regretted nothing on her journey to becoming a writer but found it difficult to live outside the conservative social norms of mid-20th-century England. She even confessed to feeling self-destructive at times. Whenever this happened, a child’s smile on a street corner could save her. “What we all want is some contact to make us feel that we do exist, because beyond that, there is a complete sort of void,” she said. Despite living a free life, Quin, who died by suicide in 1973, said she often felt she was living in that void.

Published in 1964 and now rereleased by And Other Stories, Quin’s first novel, Berg, blends tropes and techniques of crime fiction, vaudeville, and modernist literature to explore the weight of this void. Her protagonist, Alistair Berg, lives a lonely life without meaningful human contact and feels related to “the dismembered trees, half-broken walls, roofs with slates ready to fall off.” Wanting to change this, Alistair believes he “must first annihilate,” or in other words, the world as he knows it must be destroyed for some undefined new one to come. But what happens when, for whatever reason, annihilation cannot be achieved? What happens when you cannot escape respectable society, the social structures of patriarchy that you were born into? The remainder of Berg dramatizes this problem in dense, lyrical prose.

And it is this prose that makes Quin’s novel so dazzling 55 years later. The language of her book lurches in unexpected directions, fishtailing wildly from the dark to the erotic to the violent to the insanely funny. It feels barely in control, but willfully so. In insisting on this dicey means of narrative movement for the majority of the novel, she can make even simple actions feel berserk: “Crossing the park: a subterranean world surreptitiously risen; here a million star-fish pinned on the forelocks of a hundred unicorns driven by furious witches.” In describing what should be quotidian, she instead confronts the reader with a moment of demonic weirdness. And just as the psychedelia of her prose sets in, the narrative skates along, leaving behind one chaotic situation for another. Reading Quin is a marvelously frustrating experience that works according to diffraction. The light of the novel comes into contact with some interference and then creates new patterns that bump against other interferences to create new patterns.

One sees this already in the first three sentences of the book. While the first sentence tackles the problem of fathers and ridding oneself of patriarchy quite clearly—“A man called Berg, who changed his name to Greb, came to a seaside town intending to kill his father”—the following two create a kaleidoscopic portrait of Alistair and the setting:

Window blurred by out of season spray. Above the sea, overlooking the town, a body rolls upon a creaking bed: fish without fins, flat-headed, white-scaled, bound by a corridor room—dimensions rarely touched by the sun—Alistair Berg, hair-restorer, curled web toes, strung between heart and clock, nibbles in the half light, and laughter from the dance hall opposite.

Here and elsewhere, Quin works with dashes, giving just enough information to work affectively. Even when she takes the opposite approach and creates a baroque monument out of the infinitely small, the effect is the same. Everything feels frayed, dangerous—but also exciting. More than anything, her prose feels like an exploration of Virginia Woolf’s assessment in the essay “Craftsmanship” that the task of the writer is “to see what we can do with the English language as it is.” Or, as Alistair’s mother puts it in the novel, “It’s not the material but the manner in which the article’s sold that counts.”

Nevertheless, one might wonder what actually happens in the novel. And in fact, this lingering uncertainty mirrors the experience of navigating through Berg. As its first three sentences suggest, it begins clearly with the protagonist going to the town to kill his father, but that intention and clarity are immediately complicated. This happens on the level of plot as much as with its style. Early on, the reader discovers that Alistair has been in the town (it turns out to be Brighton, where Quin is from) for a week and has not achieved his patricidal ambition. Instead, he takes residence in a lodging house, in a room adjacent to one occupied by his father, Nathaniel “Nathy” Berg, and his lover, Judith Goldstein. Alistair snoops on Nathy and Judith through the partition separating their rooms and slowly entangles himself in their lives, becoming a confidant to both.

A hair-tonic and wig salesman, Alistair is haunted by resentment for his philandering father, who abandoned him and his mother when he was an infant. Alistair, however, can’t bring himself to kill the father he doesn’t really know, in some part because of curiosity about who Nathy really is, ambivalence about the task he set himself, and his own ineptitude. Even when it seems Alistair has finally killed Nathy, the body he has lugged to the train station to, naturally, ship to his mother turns out to be his father’s ventriloquist dummy. (Nathy is an amateur ventriloquist when he isn’t sponging off the women he’s seducing.) But again, Quin doesn’t let the reader linger on Alistair’s latest failure or any other discovery for very long. She keeps moving along to the next absurd situation.

Over the course of the rest of the novel, however, it becomes increasingly unclear whether Alistair actually wants to kill his father or whether he wants to sleep with Judith or both or neither. He wants to rebel against what they represent, asking, “How can I ever identify myself with such a person as she accepts?” but then also envies them. In the middle of the novel, he is stuck. “I decided to change my character, therefore shouldn’t I be acting the new role?” He doesn’t. Everything is a mess, and it only gets messier when Alistair cross-dresses and almost has a violent sexual encounter with Nathy. Alistair escapes this scenario in another dazzling moment of Quin’s prose: “a flowerless stalk waving in the wind—a frog leaping—and in one bound there over the old man’s stained waistcoat, now away.” 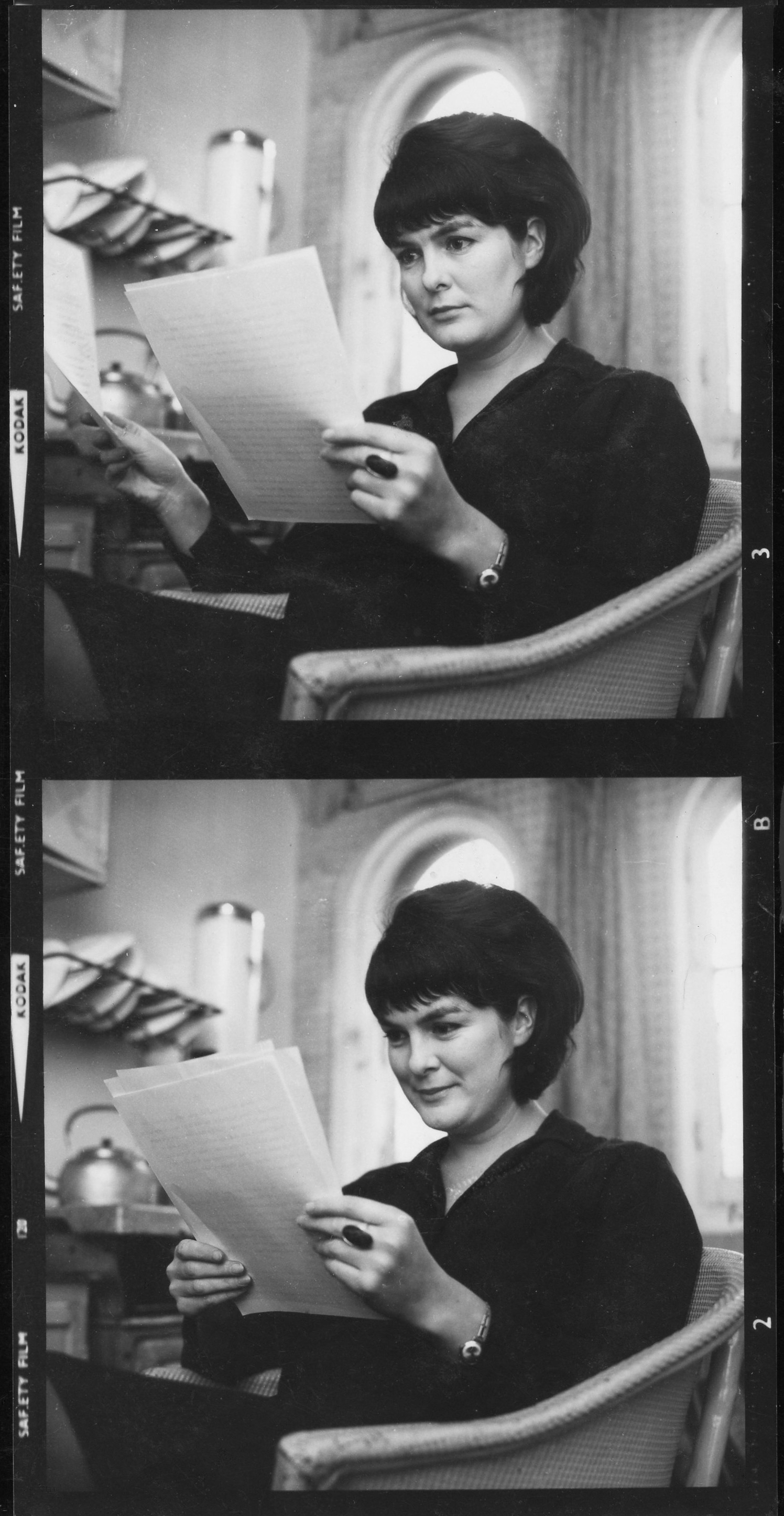 Similarly, Berg can be read as an attempt to get away from the drab trappings of respectability, to find freedom. The protagonist has left his mother’s home, is avoiding her letters and no longer practices his profession, which encourages growth or conceals the lack of it (“buy berg’s best hair tonic…in two months you will be a new man”). He has also lost his desire to have anything to do with the world. “Attachment to anything,” he says, “means betrayal.” And yet he keeps going, keeps getting involved with Nathy and Judith, right up to the end.

Stuck between wanting contact and not, Alistair moves through the novel in erratic directions. He lurches from one position to the next, but he never feels in control. This continues until the novel’s ending, a fade-out in which he returns to the stifling norms of mid-20th-century England, entering a relationship with Judith. Nathy is miraculously dead, and yet Alistair has not ventured into a brave new world after the old one—or a representative of it—has been annihilated. Alistair has only replaced the father, a scenario that is full of ambiguity, which feels fitting since, as Quin writes earlier in the novel, “Contradictions seemed the very symbiosis of an age that refused accepting a one-way ticket to no-man’s land.” In the last scene, we see Alistair lasciviously trying to sleep with Judith before he is “bound by a velvet-covered couch,” entrapped in domesticity.

“I realize that to sort of share one’s life can bring a whole area of experience. I’ve often thought what I really need is a wife.” These are not the words of Alistair justifying his return to the fold but those of Quin, who expressed in her interview with Dunn that the obligations of family life might enhance freedom by creating rhythms, routines, that can unleash creativity. With this in mind, it could be said that Quin is as envious of Dunn’s situation as Dunn is of Quin’s “freedom of having a place and having time and space.”

While this might simply be a case of the grass always seeming greener on the other side, Quin’s emphasis on the void of no contact and her affirmation of Dunn’s assessment that “one must gain by feeling deeply about people” suggest an interpretation of Berg’s ending that does not take Alistair’s reentry to society as a failure to annihilate patriarchy, a betrayal of his principle of nonattachment or a succumbing to the weight of social norms. In this view, his newfound attachment is the beginning of a whole area of experience in which Alistair learns to feel deeply about people. His (first documented) conversation with his landlady and his (sexual) interest in Judith in the last few pages of the novel would corroborate this, as would the return of the boarding house window seen at the start.

Whereas the window in the second sentence was “blurred by out of season spray,” now it is “just cleaned.” In the end, one can see clearly. But what one sees isn’t all that comforting. A person who resembles Nathy has moved into the room Alistair previously occupied, and the partition between them is shaking in the final sentence like “an animal thumping its tail…” Ending with this ellipsis, the light of the novel opens up to new interferences, new patterns of diffraction, new collisions that extend beyond the pages. Berg doesn’t stop.