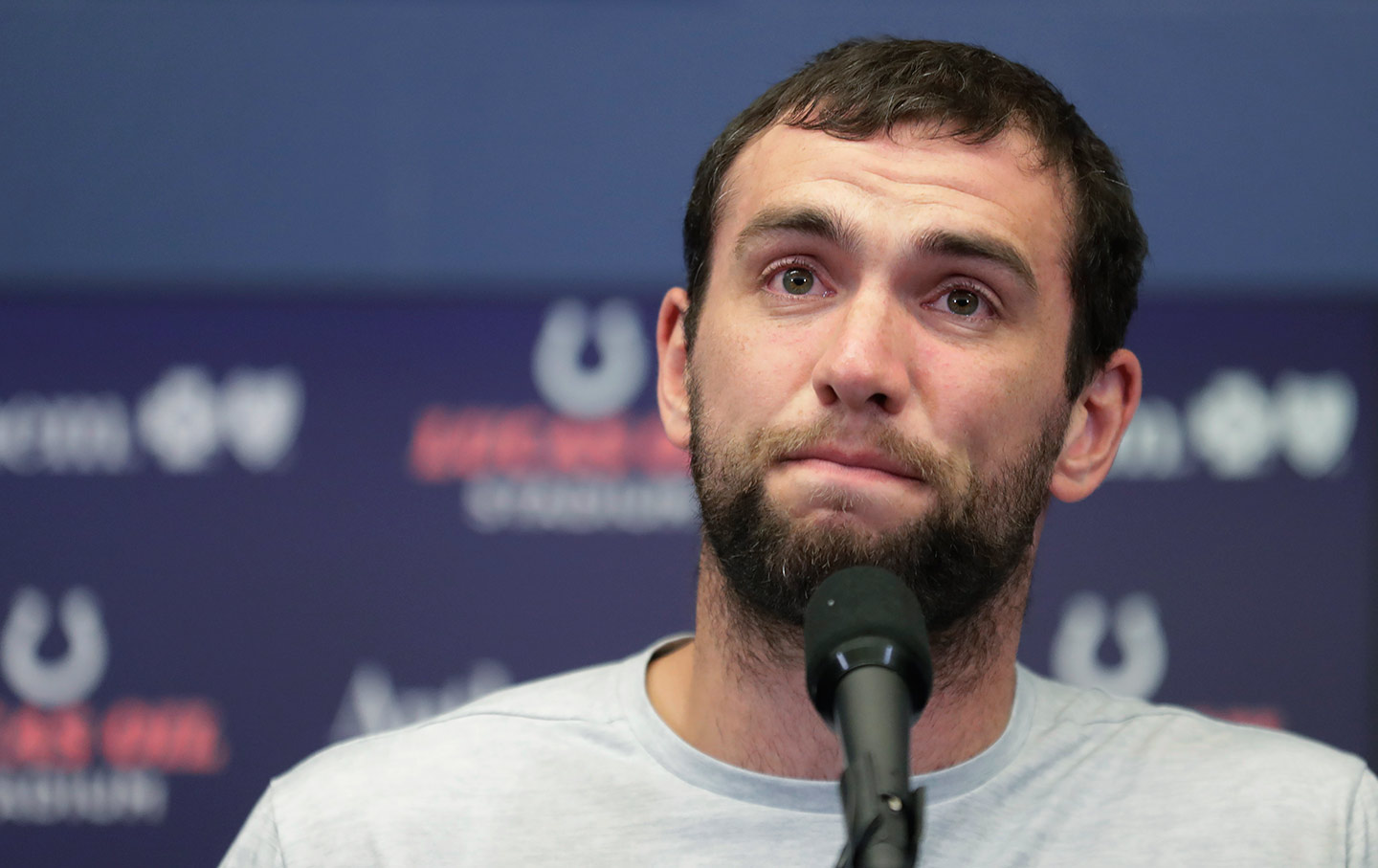 “Football broke his body and mind and at the very end, his city finalized the transaction by breaking his heart.” So said ESPN radio and television host Dan LeBatard about the abrupt and utterly shocking retirement of 29-year-old Indianapolis Colts Pro Bowl quarterback Andrew Luck. LeBatard was referring to the boos that rained down on Luck’s head as he walked off the field following last Saturday’s preseason game against the Chicago Bears. The face of the franchise was supposed to have a retirement press conference the following day, after talking about the decision to his team. Instead, in a very 21st-century media twist, ESPN reporter Adam Schefter broke the news on Twitter during the game, and the fans of Indiana, getting the news instantaneously on their various devices, jeered with rage.

This is a story that’s been unfolding like an onion, with many layers and no shortage of tears. There is the narrative about the toll this game has taken on Andrew Luck’s young body: a lacerated kidney, concussions, torn abdominal muscles, a shoulder injury that cost him a season, and mysterious ankle ailments that promised more surgeries and rehab. There is the reaction of Luck himself, someone whose reputation for loving football is renowned, saying that at 29 the sport had ceased to be fun. He commented in a choked-up voice, “I’ve been stuck in this process [of constant rehab]. I haven’t been able to live the life I want to live. It’s taken the joy out of this game… the only way forward for me is to remove myself from football.”

Then there is the palpable fear in the offices of the National Football League about what the retirement of Luck represents and the attendant public relations hit. Behind the pageantry, the war planes flying overhead, and the tailgating keg stands, this is a game largely played by black people from poor backgrounds for a largely white affluent fan base in the stands. Seventy percent of the league is black, and top tickets cost hundreds of dollars. A player like Andrew Luck masks that reality. He graduated from Stanford. He comes from an affluent family. He is white. He played football because he wanted to, not because he had to. And he chose to walk away. He decided that he didn’t need this anymore: that the game he loved—not to mention the fans he loved—didn’t love him back.

Luck also highlights the fact that the more we know about head injuries, concussions, and the toll that the game takes on the human body—“the only workplace with a 100 percent injury rate” as the union is fond of saying—the more middle-class parents are keeping their kids from the sport. As the San Francisco Chronicle observed last year in a devastating exposé, “The number of high school boys playing tackle football has been in slow but steady decline for nearly a decade. The trend has coincided with heightened concern about the frequency and lasting impact of head injuries on young athletes—with former NFL stars among those questioning whether they’d let their sons play football, and some states weighing whether to establish minimum age limits for the sport.”

The piece shows how the sport has declined dramatically in the last decade in onetime hotbeds like Ohio and Michigan, with the overall number of players dipping nationally by 75,000 at a time when high school sports on the whole have expanded. The numbers of young people playing also dropped, Forbes reported, as affluent white families are much more likely to focus their male children on lacrosse: fewer concussions and a greater social cachet for parents who want a future Wall Street raider rather than an Oakland Raider.

Losing players like Andrew Luck promises a future when the mask is ripped clean off the NFL and the sport is plainly poor black players playing for wealthy white fans living vicariously through fantasy football and a violence that they don’t have to personally endure.

As for Luck, when he cried through his press conference, one couldn’t help but think he wasn’t crying only over losing his team, and the harsh reaction of fans, so quick to show him that their bond was only as strong as his next touchdown pass. Andrew Luck was crying for a sport that over a generation has changed culturally, even if the violence is the same. A league that once depended on a community’s coming together to collectively cheer a team now demands poverty to produce players and disposable wealth among fans whose identity revolves around the violent collisions they consume as voyeurs. It’s a sport that’s sustainable only on the ugliest possible terms: the denial of the humanity of players and the acceptance of that denial by the league and the fans themselves.