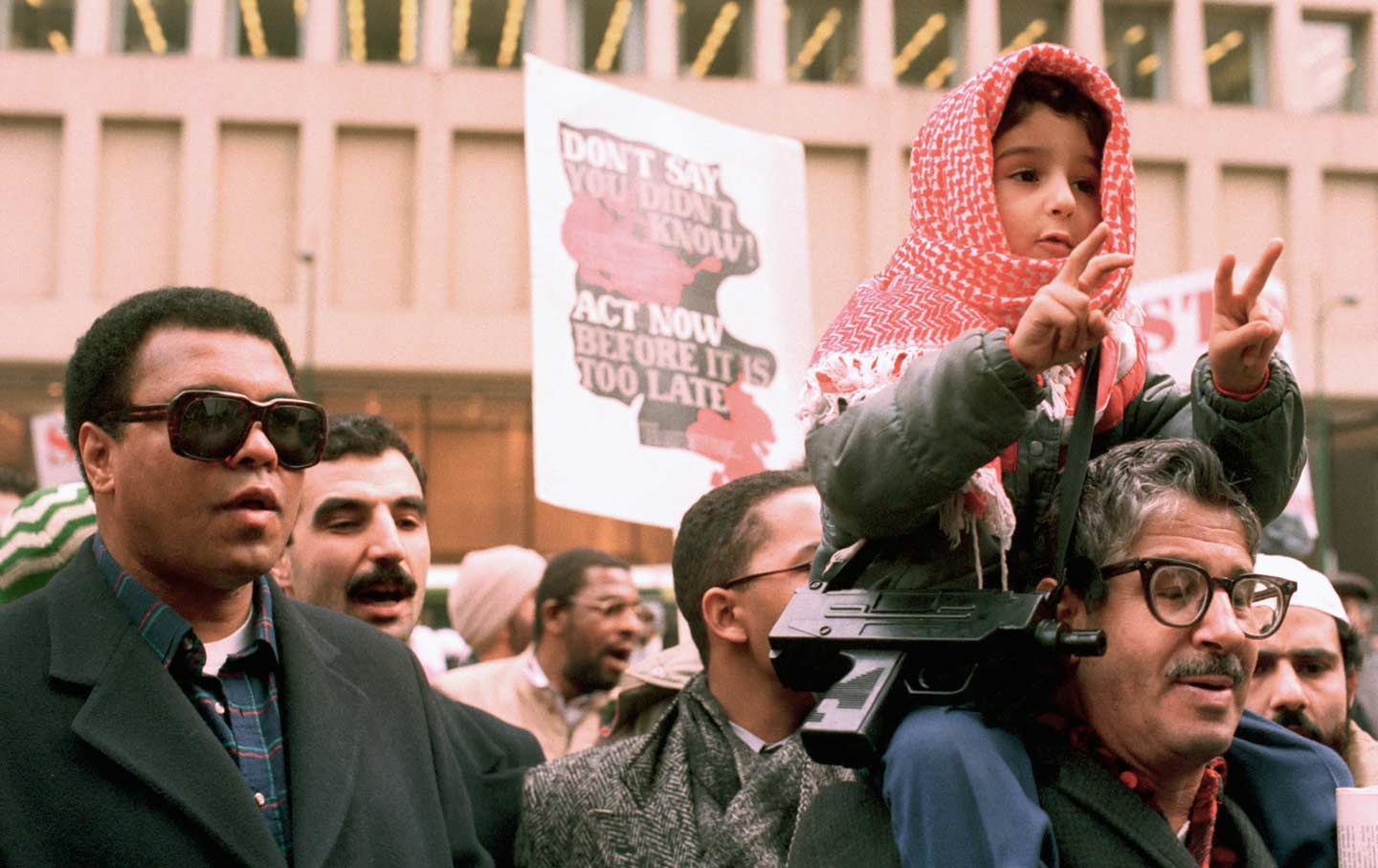 Governor Andrew Cuomo is a thuggish, tin-eared politician. Yet there is a near-poetical deafness about his latest decision: a timing so awful it’s beautiful. In a week where the world is mourning the great Muhammad Ali, Governor Cuomo has taken the step to unilaterally criminalize New York State businesses and individuals who exercise their freedom to stand with the people of Palestine. Signing an executive order for a “Boycott Divestment and Sanctions blacklist,” Governor Cuomo said, “If you boycott against Israel, New York will boycott you. If you divert revenues from Israel, New York will divert revenues from you. If you sanction Israel, New York will sanction you.” He was immediately “saluted” by Israeli Prime Minister Benjamin Netanyahu. Senator Chuck Schumer also followed up immediately to say that said he was excited to make this blacklist federal law.

Muhammad Ali was many things: boxer, humanitarian, draft resister. He was also someone who unapologetically stood for Palestinian liberation. Despite the fact that Ali had already felt the sting of a blacklist, banned by boxing from 1967–70, he did not stop speaking out upon his return to ring. In 1974, Ali visited the Palestinian refugee camps of Southern Lebanon and, amid the crushing poverty and disease, said, “In my name and the name of all Muslims in America, I declare support for the Palestinian struggle to liberate their homeland and oust the Zionist invaders.”

Unlike some of Muhammad Ali’s polarizing politics on questions of racism and US empire, which faded over time as the movements of the 1960s dwindled and Parkinson’s Disease seized brutal control of his body, the question of Palestinian liberation was something that he did not surrender easily. Here is a picture from a 1988 rally in Chicago amidst the First Intifada, a six-year period of mass resistance by Palestinians to Israeli occupation, where Ali proudly stood with solidarity activists.

Few US newspapers have openly wrestled with this part of Ali’s political history. But the Israeli newspaper Haaretz dived right in. The paper ran an ugly obituary of the Champ hours after his passing with the cringe-inducing title, “Muhammad Ali’s complicated relationship with the Jews.” It attacked Ali for having dear Jewish friends but being a merciless critic of the Israeli state. In an objective analysis, such a dynamic would only speak to the Champ’s beautiful heart. He loved his Jewish friends. He respected the Jewish religion (Rabbi Michael Lerner, at Ali’s request, will be part of his funeral services this Friday in Louisville). But he opposed the actions of a colonial state in the Middle East, just as he opposed the actions of the colonial state he called home, when it entered Vietnam.

What Haaretz was doing—conflating criticism of Israel with anti-Semitism—is politically and morally bankrupt. It is also exactly what Andrew Cuomo and Chuck Schumer are doing with this push to criminalize Palestinian-rights activists in the United States. As Senator Schumer said in a speech, “What does it mean that those who are at the core of the BDS movement are so fond of statehood for every other people but not the Jewish people? There’s an old word for it, we always have a word for it. It’s called anti-Semitism. Not simply just—bad enough anti-Israel, they’re anti-Semites.”

This is a horrific political calculus by Schumer: Raise your voice against the death of any child in Gaza, any home that is bulldozed by the IDF, any prisoner dying while on a hunger strike in an Israeli prison, and you are an anti-Semite even if—like myself—you are proudly Jewish. Even if—like Muhammad Ali—you hold your Jewish friends close to your heart. It makes sense now that, when asked his thoughts on the news of Ali’s death, all Schumer could offer was this thin gruel: “What I thought of is, I was playing basketball and our high school coach would tell us, be like Muhammad Ali, float like a butterfly, sting like a bee.”

I highly doubt that is all Senator Schumer thought about upon hearing of the Champ’s passing. But such wafer-thin statements are what you say when you don’t want to expose your own bigotry. It is what you say when you want to bask in the glow of the Champ while denying the actuality of who he was, what he believed, and why his courage inspired so many across the world.

To deny Muhammad Ali’s pro-Palestinian politics is erasure. It’s whitewashing. It’s violence. It’s performing the ugliest possible sin: lying about someone’s life over their dead body. Upon Ali’s passing, Andrew Cuomo tweeted, “RIP Muhammad Ali, you inspired us all and will always be ‪#‎TheGreatest.” Get the Champ’s name out of your mouth, Governor, and tell the disturbing truth. If Muhammad Ali was in his prime today, he would be your target: someone denied the right to make a living in the state of New York.