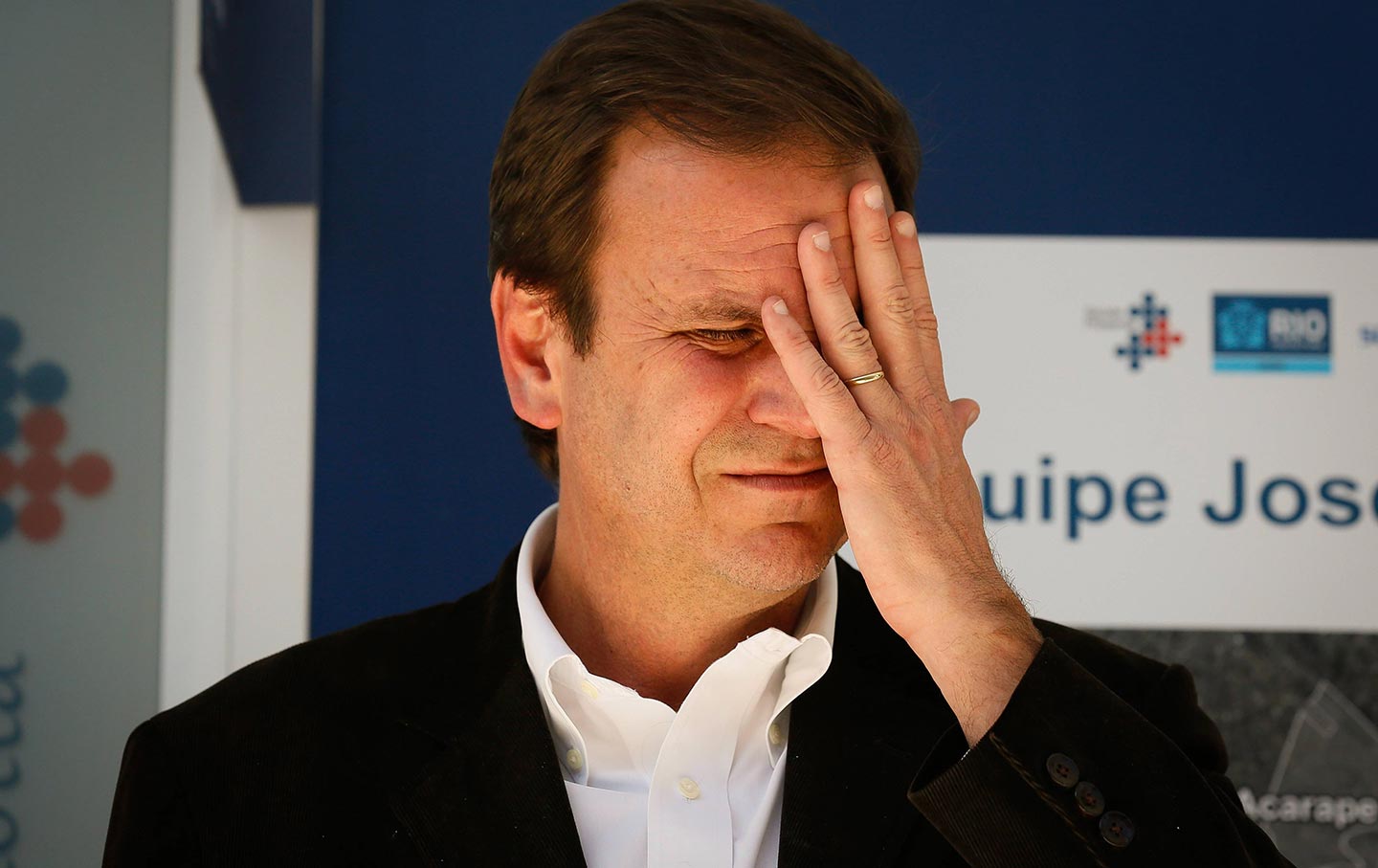 In the summer of 2016, Rio’s then mayor, Eduardo Paes, was the political face of Brazil’s Summer Olympics. The country had been plagued by bribery and corruption scandals, with former president Dilma Rousseff recently impeached and her replacement, Michel Temer, so unpopular that he could not even show up to a funeral for fear of being booed. Paes was presented to the world as the cleanest man in the slop house.

He was built for an international audience: a glib, global mayor as comfortable doing a TED Talk or confabbing with Michael Bloomberg about the future of the global city as he is drinking beers with Rio’s favelados. Social activists who saw him as the face of displacement of the poor raised their voices, but were drowned out by the praise for someone spoken about as a future president.1

Now That the Games Are Over, the Real Olympic Drama Begins in Rio

Brazil For Sale: How a Legal Coup Set the Stage for Privatization

But now everything might come crashing down. Brazil’s Supreme Court, in its ongoing corruption investigations, seems to be closing in on Paes. According to a list leaked to the Estadao newspaper, the court has decided to open investigations into the former mayor. According to the leak, one of Odebrecht’s informants alleges that Paes received R15 million (about $4.8 million) in payments from a conglomerate to help “facilitate” Olympic contracts. 2

Paes’s spokeswoman, Tereza Fayal, denied the allegations, calling them “absurd and untruthful.” She said, “He vehemently denies that he has accepted bribes to facilitate, or to benefit, the interests of the Odebrecht company.”3

Yet many critics have long suspected that Paes, with mega-event-fueled dirty money swirling all about him, could not possibly have kept his hands clean. Last May, I sat with then-Mayor Paes and asked about the specter of Olympic corruption that surrounded the city’s “legacy projects.” Given that Brazil’s political system was rife with bribery scandals, and given that the Olympics carry graft with them like a dog with fleas, it seemed that scandal was preordained. I asked him about his “guarantee” that there would be “no corruption” involved in the construction of these Olympic games. Paes said, “I guarantee this about the construction [organized by] the city. Most of the Olympic venues and construction are being built by the city, but not all. There are some from the state level, some from the federal level. So I guarantee from a city perspective that there is no corruption.” As an answer, it might sound a little too-cute-by-half, but in essence he said that when it comes to everything he was overseeing, no corruption.4

Paes made these comments, however, mere days after a newly built seaside bicycle path, one of the so-called Olympic legacy projects, was destroyed by a massive wave, killing two people. This deadly piece of legacy was built six months late, and over budget by $2.5 million. But the scandal wasn’t only in the shoddy construction. The firm in charge, Concremat, was run by the family of the city’s tourism director, Antônio Figueira de Mello. Figueira de Mello was also Mayor Paes’s campaign treasurer during his initial mayoral run in 2008.5

I asked Paes about this, alongside my journalistic partners Zach Zill and Kate Steiker-Ginzburg. His response: “The bicycle path was not legacy project. You look at the legacy list, it’s not there. It’s a city construction, for the city. It’s not an Olympic construction. So it has nothing to do with the Olympics.” Yet in a splashy document of Olympics-boosterism put out by Paes’s own office, a document sitting on an end table in the waiting room just outside our interview, the city listed “a bike path on the ocean side of the highway, offering cyclists a privileged view of São Conrado Beach.”6

This response was classic Paes: very glib, very comfortable with lying right to your face.  7

I asked him about the connection to Concremat. Paes said, “It’s not very connected to me. My secretary of tourism, he’s from the family of this company. I cannot prohibit a company because my secretary of tourism that has nothing to do with the construction is a relative of them….” And then he deflected: “If you ask the IOC guys, it’s one of the companies that they like the most. They do a lot of the commissioning of the venues and the management of most of the constructions.” 8

The same week, I also spoke to a Rio City Council member, Jefferson Moura. Councilman Moura was heading an investigative committee on Olympic corruption. He spoke at length about the ways in which Paes was attempting to shut down all investigations, saying, in words that could read as prophetic, “Someone who has nothing to hide, has nothing to fear.”9

The Concremat “scandal” is tiny compared to the allegations Paes now faces. Jail, scandal, and the dashing of a once-bright political future could all arise from these bribery allegations. And it would simply reinforce what critics of the Olympic Games have been saying for years: that the Games by their nature are catnip for greedy contractors and weak-willed political leaders.10

At the end of our interview, I asked Paes about any regrets he might have about how the Olympics were handled. He laughed ruefully and said, “Ah, you’ll find out.” I suppose we will.11