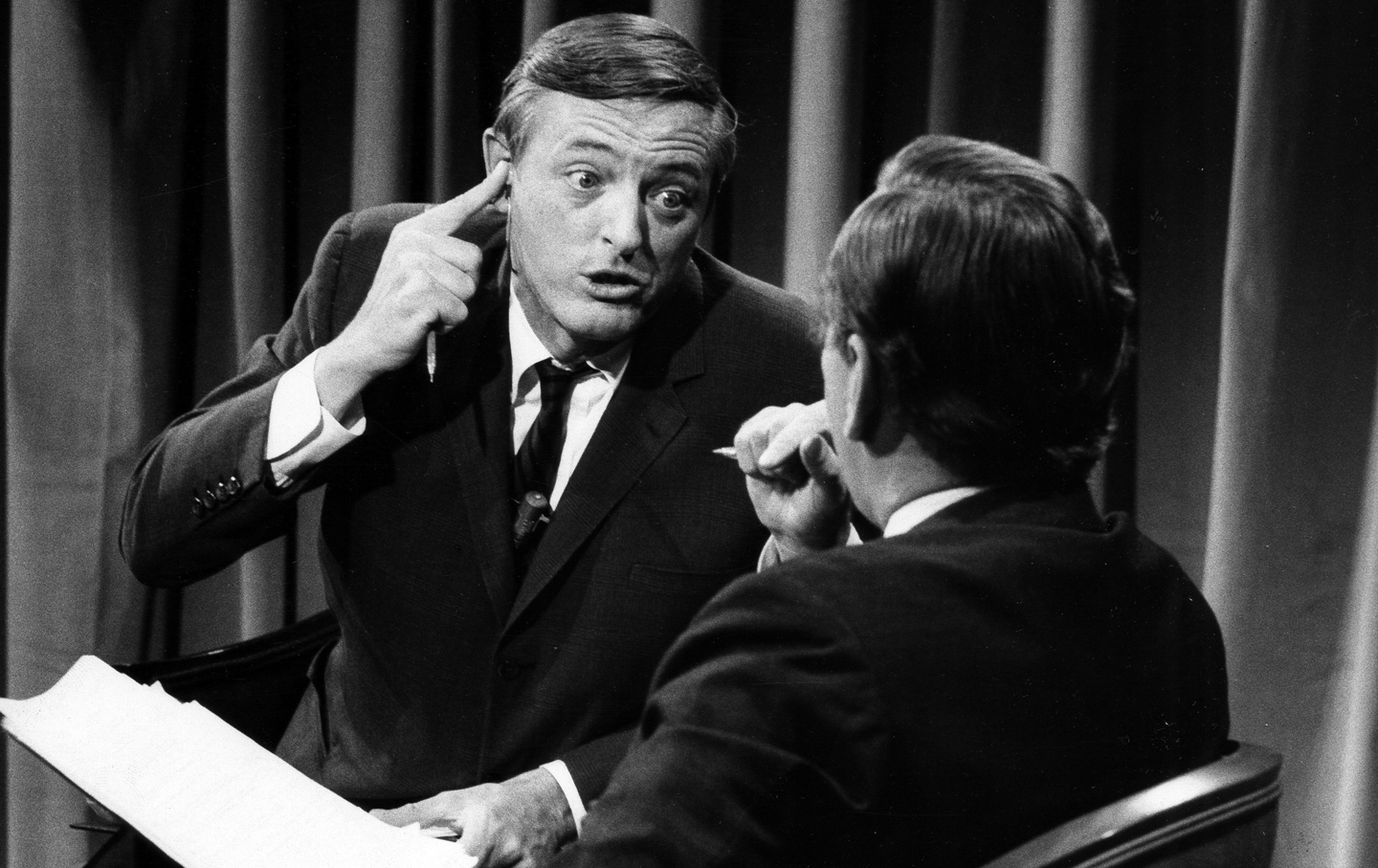 On October 14, 2004, Jon Stewart appeared on CNN’s flagship shout-fest, Crossfire, in order to denounce it, accusing it of “doing theater” when it “should be doing debate.”

While it made for bracing viewing, Stewart’s wasn’t a particularly novel observation. After all, by 2004, most news and public affairs programs (Charlie Rose and the PBS Newshour are among the few honorable exceptions), especially those on cable television, had long since entered the realm of “infotainment.”

How did we get to this point?

The Best of Enemies, a rollicking new documentary about the series of televised debates between the journalist William F. Buckley and the novelist and essayist Gore Vidal—a longtime Nation contributing editor—during the 1968 political conventions, may provide us with some answers.

Nineteen sixty-eight was an annus horribilis in the life of the country. The American public, already riven by the war in Vietnam, was forced to absorb a series of shocks in very short order. On January 31, the North Vietnamese launched the Tet Offensive; on March 31, President Lyndon Johnson announced he would not seek reelection; on April 4, Martin Luther King Jr. was gunned down in Memphis; and on June 5 Robert F. Kennedy was assassinated in Los Angeles. All through the spring riots and protests rocked Washington, DC; Chicago; New York; Baltimore; Kansas City; Wilmington; and Louisville.

The Republican and Democratic National Conventions were to take place that summer in Miami and Chicago, respectively. Struggling in the ratings, ABC News decided to feature the famous controversialists William F. Buckley Jr. and Gore Vidal during its nightly post-convention coverage.

Gore Vidal had been a public figure since the publication of his first novel, Williwaw, at the age of 19. A veteran of the Pacific campaign, Vidal cut a controversial figure on the American literary scene, which was scandalized by the frank exploration of homosexuality in his third novel, The City and the Pillar. Vidal, who was proud of his political pedigree (his grandfather, Thomas Gore, was the heroically anti-interventionist Senator from Oklahoma), dabbled in politics, and ran unsuccessfully for Congress in 1960.

By the time of the debates, Bill Buckley was the most famous right-wing polemicist in the United States. He founded National Review magazine alongside a menagerie of ex-Trotskyists in 1955. Like Vidal, he dabbled in politics, running for mayor of New York City in 1965. In addition to writing a nationally syndicated newspaper column, Buckley also hosted his own weekly public-affairs program, Firing Line.

Given the affinities of the protagonists, the debates had the potential to be a high-minded, philosophical clash: Athens versus Jerusalem in prime time. Yet, because of the palpable disdain Buckley and Vidal had for one another, it was not to be.

The name-calling started early on in Miami, with Vidal comparing Buckley to both Marie Antoinette and to his own fictional creation, the transvestite Myra Breckinridge. That set the tone, and it only degenerated from there. At their penultimate debate in Chicago, arguing over the clashes between police and anti-war protesters, Vidal called Buckley a “crypto-nazi.” Buckley responded by calling Vidal a “queer” and, attempting to rise from his seat, threatened to punch Vidal “in the goddamn face.”

What accounts for the vehemence with which the two celebrity debaters went at it? Part of it, of course, was personal, but there was more to it than that.

As his biographer Sam Tanenhaus points out, in those days Buckley worried whether governing institutions could withstand a popular onslaught from the street. Even as rocked-ribbed a Republican as Buckley could find no reason to exult in President Johnson’s decision to step aside, noting that the “conservatives for the most part, will wonder whether it is all a cause for rejoicing. The conservative fears plebiscitary government…”

In his view, the Chicago police were in the right, because he viewed them as a force for stability against the degradations of the shaggy haired anti-war protesters.

Vidal, on the other hand, believed that the anti-war protesters were in the right, because, in his view, the primary threat to the American political order came from the entanglement in Vietnam. Buckley’s error (in addition to his losing his cool) was to overestimate the threat to American political stability posed by the rioting students and to vastly underestimate the threat posed to it by an illegal and unjust war in Southeast Asia.

In the film, Buckley’s younger brother, Reid, admits as much, commenting that Vidal was correct in prophesying the danger to the American republic posed by wars of empire, which, the younger Buckley drolly notes, “is our present dilemma.”

As the film makes clear, the confrontation in Chicago haunted both men for the rest of their lives. Buckley was so ashamed of his outburst that he rarely—if ever—spoke of it. He eventually convinced himself that ABC had destroyed the tapes of the infamous exchange in Chicago.

Vidal, however, reveled in the outcome, bragging that he had “enticed the cuckoo to sing its song.” And his hatred for Buckley never abated. In an obituary he wrote for Buckley in February 2008, he called the deceased “a hysterical queen” who was “often drunk and out of control.”

Gary Wills, himself a one-time protégé of Buckley’s, recently wrote in The New York Review of Books that he is sorry to see that the documentary is “being hailed for remembering a golden age when intellectuals fought out profound issues in public.”

Indeed, the effect the debates had on the future of television news was nothing if not dismal. After the ratings success of the debates in Miami and Chicago, public-affairs programs began to feature, as a matter of course, far less erudite talking heads who hewed to a tired “liberal” versus “conservative” script.

The filmmakers assert that after Buckley and Vidal “television would never be the same again.” Well, that much is true. But looking back on 1968 from the age of Hannity, O’Reilly, Matthews, and Scarborough, one could hardly conclude that the change was for the better.