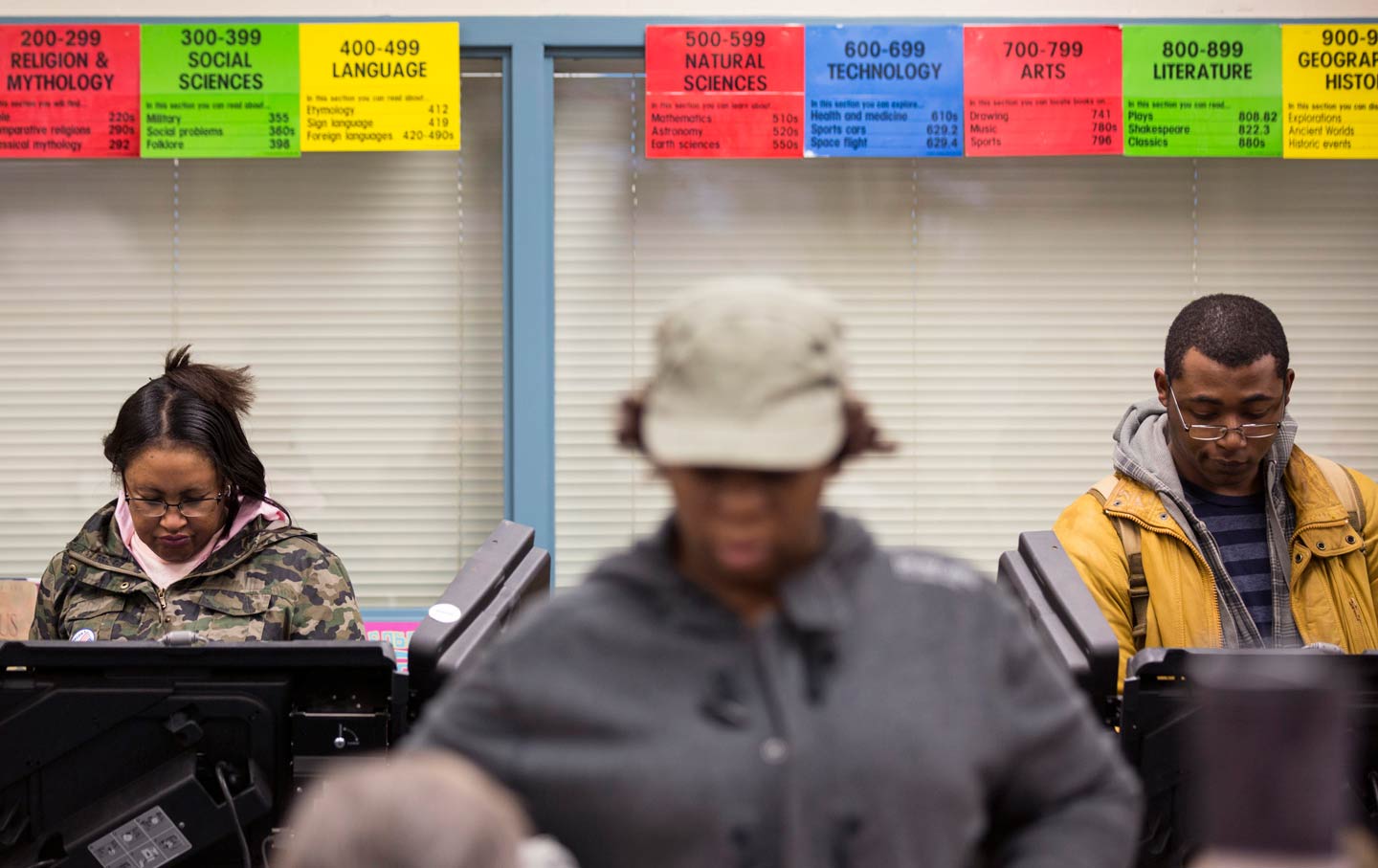 Voters cast their ballot in the US midterm elections in Ferguson, Missouri, on November 4, 2014. (Reuters / Whitney Curtis)

If you’ve wondered about the opportunities the current nationwide racial panic attack provides the Democratic Party, Steve Phillips believes he has an answer. In his compelling new book Brown Is the New White, out now from The New Press, Phillips argues that instead of fretting over fickle swing voters and tending to the wounds of freaked-out white people, the party ought to embrace the potential of a progressive white- and people of color–led majority—and move confidently leftward with a racial justice–minded political agenda. Census experts have settled on 2043 as the year when white people cease to be the racial majority in the United States. But Phillips argues, the electoral math is already in place for the Democratic Party to stop fretting about white swing voters and to focus on this future—now.

Phillips has a rich history in African-American activism and electoral politics, which includes serving as a delegate to Jesse Jackson’s 1984 and 1988 campaigns and for eight years on the San Francisco school board. As such, he’s clearly invested in electoral politics as the primary vehicle for addressing deepening inequality. Phillips offers an optimistic, persuasive argument for Democratic (and even Republican) party leaders to rethink their current white-centric strategy, outreach, and leadership development pipeline to expand their coalitions. “My argument is we should be taking over these parties and then transforming them and putting them in service of the community,” Phillips said at an event for his book at the Ford Foundation in New York City last week.

But if I have any words of caution, it’d be that readers not confuse Phillips’s offering, which is at its heart a guide for smart, racially aware progressive electoral strategy, for a playbook on how to grapple with race in the 21st century. Because race in the United States is far more complex than Phillips gets around to discussing in Brown Is the New White.

In a chapter titled “Meet the New American Majority,” Phillips runs through the facets of the progressive majority as it performed in 2008 and 2012: African Americans—the most dependable Democratic voters, and a full 23 percent of the party—flexed their electoral muscle in historic turnout levels. Seventy-one percent of Latinos—the largest non-white group in the country—backed Obama in 2012, and because of both their sheer numbers and their low voter turnout, they still represent millions of voters’ worth of untapped political potential. Asian Americans, who are the fastest-growing racial or ethnic group in the United States and whose political tastes are more evenly distributed across the political spectrum, also backed President Obama by a three-to-one margin in 2012. And on Phillips goes, dedicating similar portraits to Arab Americans, Native Americans, and—the longest discussion—progressive whites. It’s a bracing look at America.

Phillips opens each subsection with a dedication to a real-life friend of that race, people whom Phillips grew up with and struggled alongside in progressive fights in the 1980s. “At first glance, our multiracial coalition may have looked like a motley collection of loud, fired-up kids of color and progressive White students tramping through the formerly placid halls of power,” Phillips writes. “A closer look at the organizers, however, would have revealed a kaleidoscopic picture representing the children and grandchildren of the very communities whose labor and land helped build America.”

At the end Phillips stands back from his assembled tapestry as if to say, Voilà! Look at these neglected masses, ready guests just waiting for an invite to the party. But such writing runs the risk of presuming that people of color, by virtue of simply happening to not be white, have a unified set of political principles.

Nowhere does Phillips write that these immigrant-led demographic shifts will automatically translate into a golden-hued progressive future. Phillips knows that white supremacy is not the kind of political and cultural force that will recede into the background willingly. But he does gloss over the fact that whiteness is a mutable concept, and the term “people of color” is a learned political identity, and at best an imperfect shorthand for everyone who happens not to be white at the moment. Such writing also overlooks that many people of color are desperate to win the protections of whiteness, and at the minimum ensure that they are never relegated to blackness in the country’s racial hierarchy.

And here is where I think Phillips’s electoral calculus doesn’t always add up. His portrait doesn’t acknowledge that race is more than just a two-way, white people vs. the rest of us dynamic, and that the current multiracial coalition is one of happenstance, and formed from transactional politics.

For Latinos and Asian voters in particular, who post the lowest voter-turnout rates of all racial groups, too little is known about the majority of these relatively young communities to broadly assume that just because most active Latino and Asian voters have supported Democratic candidates in recent presidential elections, the Democratic party speaks to Latinos and Asians who haven’t voted. Sure, 73 percent of Asian Americans voted for President Obama in 2012, but less than one-third of the Asian-American electorate turned out that year. It’s not hard to imagine a general election campaign in which a newly minted presidential nominee Donald Trump comes out swinging against affirmative action—because it treats Asians unfairly.

Phillips acknowledges these possibilities toward the end of his book in a chapter titled, “Conservatives Can Count.” Indeed, they can. Phillips runs through the ways the Republican Party has already adjusted to face the coming people-of-color majority in the country: Voter ID laws designed to suppress people of color’s voting power. Koch brothers–backed projects like the Libre Initiative, currently the best-organized outfit to nurture conservative Latinos. The GOP’s nurturing of politicians of color like Senator Marco Rubio, Utah Representative Mia Love, former Louisiana governor Bobby Jindal, South Carolina Governor Nikki Haley—all of them the children of immigrants. (“Democrats, by contrast…have not kept pace,” Phillips writes.) Many of these candidates seem to have been designed in a lab to appeal solely to the sensitivities of white conservatives, sure. But their success shows that some in the Republican Party can read Census reports as well as the rest of us. And current Republican Party meltdown aside, by aggressively pursuing a voter-suppression strategy, the party has put in place a game plan to reckon with the inevitable.

Phillips argues that the Democratic Party is leaving millions of votes from people of color on the table by not bothering to look up from white voters. At the Ford Foundation event, it was Tamar Jacoby, the conservative advocate for comprehensive immigration reform, who cautioned against cheering for a lopsided “one victorious brown/white party versus a dwindling racists party.” “Listen, everyone has a stake in my part of the party being competitive,” the registered Republican said. “It’s the old adage: ‘Taken for granted by one party, and ignored by the other party.’”

After meeting Democratic voters of color on the campaign trail in recent months who vote for Democratic candidates because they’ve been pushed, not pulled, into the party, I agree with Jacoby.

Phillips’s book is a must-read for those in the elections industry. But my advice? Don’t just send it to liberals—give a copy to your conservative friends too.