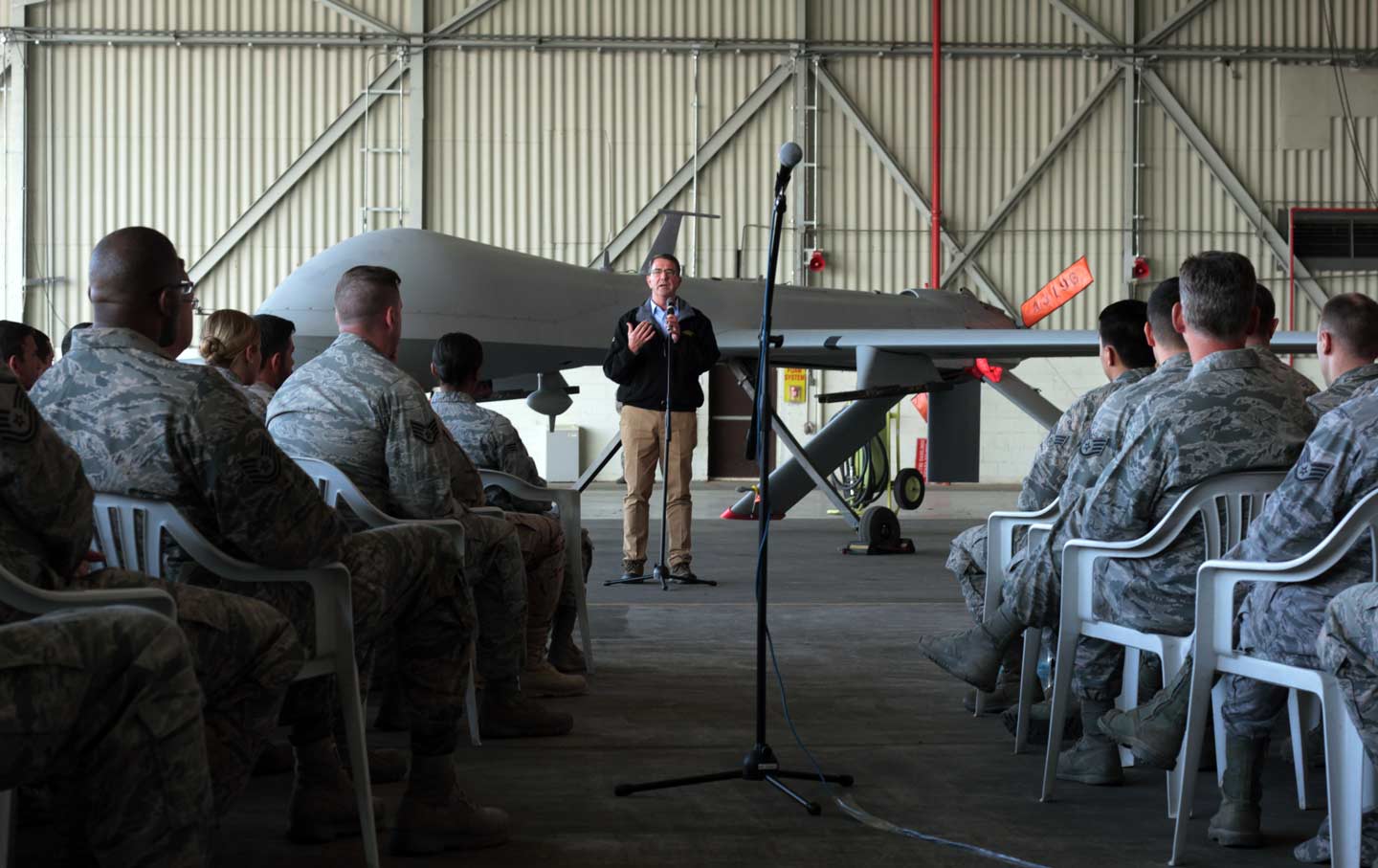 Defense Secretary Ash Carter addresses the US troops at the Incirlik Air Base near Adana, Turkey. (AP Photo)

In the era of the long “war on terror,” Thursday, June 2, 2016 was a tough day for the US military. Two modern jet fighters, a Navy F-18 Hornet and an Air Force F-16 Fighting Falcon, flown by two of America’s most capable pilots, went down, with one pilot killed. In a war that has featured total dominance of the skies by America’s intrepid aviators and robotic drones, the loss of two finely tuned fighter jets was a remarkable occurrence.

As it happened, though, those planes weren’t lost in combat. Enemy ground fire or missiles never touched them nor were they taken out in a dogfight with enemy planes (of which, of course, the Islamic State, the Taliban, and similar US enemies have none). Each was part of an elite aerial demonstration team, the Navy’s Blue Angels and the Air Force’s Thunderbirds, respectively. Both were lost to the cause of morale-boosting air shows.

Each briefly grabbed the headlines, only to be quickly forgotten. Americans moved on, content in the knowledge that accidents happen in risky pursuits.

But here’s a question: What does it say about our overseas air wars when the greatest danger American pilots face involves performing aerial hijinks over the friendly skies of “the homeland”? In fact, it tells us that US pilots currently have not just air superiority or air supremacy but total mastery of the fabled “high ground” of war. And yet in Afghanistan, Iraq, and elsewhere in the Greater Middle East, while the United States rules the skies in an uncontested way, America’s conflicts rage on with no endgame in sight.

In other words, for all its promise of devastating power delivered against enemies with remarkable precision and quick victories at low cost (at least to Americans), air power has failed to deliver, not just in the ongoing “war on terror” but for decades before it. If anything, by providing an illusion of results, it has helped keep the United States in unwinnable wars, while inflicting a heavy toll on innocent victims on our distant battlefields. At the same time, the cult-like infatuation of American leaders, from the president on down, with the supposed ability of the US military to deliver such results remains remarkably unchallenged in Washington.

Since World War II, even when the US military has enjoyed total mastery of the skies, the end result has repeatedly been stalemate or defeat. Despite this, US leaders continue to send in the warplanes. To understand why, a little look at the history of air power is in order.

In the aftermath of World War I, with its grim trench warfare and horrific killing fields, early aviators like Giulio Douhet of Italy, Hugh Trenchard of Britain, and Billy Mitchell of the United States imagined air power as the missing instrument of decision. It was, they believed, the way that endless ground war and the meat grinder of the trenches that went with it could be avoided in the future. Unfortunately for those they inspired, in World War II the skies simply joined the land and the seas as yet another realm of grim attrition, death, and destruction.

Here’s a quick primer on the American experience with air power:

So here we are, in 2016, 25 years after Desert Storm and nearly a decade after the Petraeus “surge” in Iraq that purportedly produced that missing mission accomplished moment for Washington—and US air assets are again in action in Iraqi and now Syrian skies. They are, for instance, flying ground support missions for Iraqi forces as they attempt to retake Fallujah, a city in al-Anbar Province that had already been “liberated” in 2004 at a high cost to US ground troops and an even higher one to Iraqi civilians. Thoroughly devastated back then, Fallujah has again found itself on the receiving end of American air power.

If and when Iraqi forces do retake the city, they may inherit little more than bodies and rubble, as they did in taking the city of Ramadi last December. About Ramadi, Patrick Cockburn noted last month that “more than 70% of its buildings are in ruins and the great majority of its 400,000 people are still displaced” (another way of saying, “It became necessary to destroy the town to save it”). American drones, meanwhile, continue to soar over foreign skies, assassinating various terrorist “kingpins” to little permanent effect.

Tell Me How This Ends

Here’s the “hot wash”: something’s gone terribly wrong with Washington’s soaring dreams of air power and what it can accomplish. And yet the urge to lose the planes only grows stronger among America’s political class.

Given the frustratingly indecisive results of US air campaigns in these years, one might wonder why a self-professed smart guy like Ted Cruz, when still a presidential candidate, would have called for “carpet” bombing our way to victory over ISIS, and yet in these years he has been more the norm than the exception in his infatuation with air power. Everyone from Donald Trump to Barack Obama has looked to the air for the master key to victory. In 2014, even Petraeus, home from the wars, declared himself “all in” on more bombing as critical to victory (whatever that word might now mean) in Iraq. Only recently he also called for the loosing of American air power (yet again) in Afghanistan—not long after which President Obama did just that.

Even as air power keeps the US military in the game, even as it shows results (terror leaders killed, weapons destroyed, oil shipments interdicted, and so on), even as it thrills politicians in Washington, that magical victory over the latest terror outfits remains elusive. That is, in part, because air power by definition never occupies ground. It can’t dig in. It can’t swim like Mao Zedong’s proverbial fish in the sea of “the people.” It can’t sustain persuasive force. Its force is always staccato and episodic.

Its suasion, such as it is, comes from killing at a distance. But its bombs and missiles, no matter how “smart,” often miss their intended targets. Intelligence and technology regularly prove themselves imperfect or worse, which means that the deaths of innocents are inevitable. This ensures new recruits for the very organizations the planes are intent on defeating and new cycles of revenge and violence amid the increasing vistas of rubble below. Even when the bombs are on target, as happens often enough, and a terrorist leader or “lieutenant” is eliminated, what then? You kill a dozen more? As Petraeus said in a different context: Tell me how this ends.

From Ronald Reagan to Barack Obama, dropping bombs and firing missiles has been the presidentially favored way of “doing something” against an enemy. Air power is, in a sense, the easiest thing for a president to resort to and, in our world, has the added allure of the high-tech. It looks good back home. Not only does the president not risk the lives of American troops, he rarely risks retaliation of any kind.

Whether our presidents know it or not, however, air power always comes with hidden costs, starting with the increasingly commonplace blowback of retaliatory terrorist strikes on “soft” targets (meaning people) in cities like Paris or Madrid or London. Strikes that target senior members of enemy armies or terrorist organizations often miss, simply stoking yet more of the sorts of violent behavior we are trying to eradicate with our own version of violence. When they don’t miss and the leadership of terror groups is hit, as Andrew Cockburn has shown, the result is often the emergence of even more radical and brutal leaders and the further spread of such movements. In addition, US air power, especially the White House-run drone assassination program, is leading the way globally when it comes to degrading the sovereignty of national borders. (Witness the latest drone strike against the head of the Taliban in violation of Pakistani airspace.) Right now, Washington couldn’t care less about this, but it is pioneering a future that, once taken up by other powers, may look far less palatable to American politicians.

Despite the sorry results delivered by air power over the last 65 years, the US military continues to invest heavily in it—not only in drones but also in ultra-expensive fighters and bombers like the disappointing F-35 (projected total cost: $1.4 trillion) and the Air Force’s latest, already redundant long-range strike bomber (initial acquisition cost: $80 billion and rising). Dismissing the frustratingly mixed and often destabilizing results that come from air strikes, disregarding the jaw-dropping prices of the latest fighters and bombers, America’s leaders continue to clamor for yet more warplanes and yet more bombing.

And isn’t there a paradox, if not a problem, in the very idea of winning a war on terror through what is in essence terror bombing? Though it’s not something that, for obvious reasons, is much discussed in this country, given the historical record it’s hard to deny that bombing is terror. After all, that’s why early aviators like Douhet and Mitchell embraced it. They believed it would be so terrifyingly effective that future wars would be radically shortened to the advantage of those willing and able to bomb.

As it turned out, what air power provided was not victory, but carnage, terror, rubble—and resistance.

Americans should have a visceral understanding of why populations under our bombs and missiles resist. They should know what it means to be attacked from the air, how it pisses you off, how it generates solidarity, how it leads to new resolve and vows of vengeance. Forget Pearl Harbor, where my uncle, then in the Army, dodged Japanese bombs on December 7, 1941. Think about 9/11. On that awful day in 2001, Homeland USA was “bombed” by hijacked jet liners transformed into guided missiles. Our skies became deadly. A technology indelibly associated with American inventiveness and prowess was turned against us. Colossally shocked, America vowed vengeance.

Are our enemies any less resolutely human than we are? Like us, they’re not permanently swayed by bombing. They vow vengeance when friends, family members, associates of every sort are targeted. When American “smart” bombs obliterate wedding parties and other gatherings overseas, do we think the friends and loved ones of the dead shrug and say, “That’s war”? Here’s a hint: we didn’t.

Having largely overcome the trauma of 9/11, Americans today look to the sky with hope. We watch the Blue Angels and Thunderbirds with a sense of awe, wonder, and pride. Warplanes soar over our sports stadiums. The sky is our high ground. We see evidence of America’s power and ingenuity there. Yet people in Afghanistan, Iraq, and elsewhere often pray for clouds and bad weather; for them, clear skies are associated with American-made death from above.

It’s time we allow other peoples to look skyward with that same sense of safety and hope as we normally do. It’s time to recall the warbirds. They haven’t provided solutions. Indeed, the terror, destruction, and resentments they continue to spread are part of the problem.