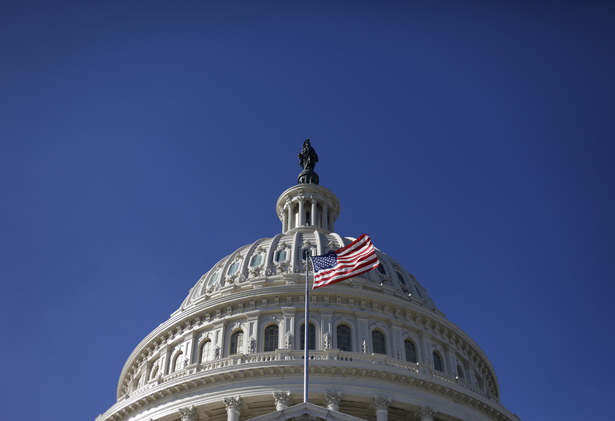 Congressional Democrats were in an understandably celebratory mood after the shutdown schemes of Ted Cruz and the Tea Party went so awry that conservative stalwarts like Representative Sean Duffy were admitting, “Big picture: I think this was a horrible strategy.” What was horrible in the eyes of the Grand Old Partisans wasn’t the damage done to public services, the economy or confidence in the “full faith and credit” of the United States. It was the political cost: by the time Republicans allowed the government to reopen, the party’s favorability rating had fallen ten points—to 28 percent, the lowest level recorded for a major party since Gallup began asking the question in 1992.

Those self-inflicted wounds could be severe. Democrats like Virginia gubernatorial candidate Terry McAuliffe are experiencing immediate benefits, and others could come out ahead in 2014. Republicans once presumed that election cycle would hand them control of the Senate, where twenty-one Democratic seats are up for election, versus just fourteen GOP seats. Now, however, Democratic senators who were seen as vulnerable are ahead in the polls and open-seat races in states like Iowa and Michigan are trending Democratic. In House races, likely voters—turned off not just by the shutdown but by broader patterns of GOP obstruction and extremism—say by wide margins that they prefer Democratic control. No wonder Senator John McCain was saying, even before the collapse of the shutdown strategy, “Republicans have to understand, we have lost this battle.”

But McCain said “battle,” not war. The 2014 election is a long way off, and Democrats have an uphill fight in many districts because of GOP gerrymandering. More generally, while Democrats have an opening, theirs is still a party with a rare talent for snatching defeat from the jaws of victory. That’s what Paul Ryan is counting on. The House Budget Committee chair, who let Cruz and others grab the limelight (and the blame) during the shutdown, is now back at center stage as the essential Republican on the conference committee created as part of the agreement to end the shutdown. That committee is supposed to reach a deal by mid-December, just in time to avert another shutdown. Ryan is already restating his oft-rejected proposals for “reforms to entitlement programs”—and he’s not being laughed out of the room by the Democrats. President Obama and Senate Budget Committee chair Patty Murray have been too willing to find “common ground” with the GOP, as Murray put it. In the search for that common ground, Social Security, Medicare and Medicaid could be undermined.

This is precisely what Republicans are angling for. They don’t need much to get back in the game. Ryan would be more than happy to settle for an agreement that opens the way for partial privatization of those programs, as well as some movement toward vouchers, means testing and an increase in the retirement age.

Democrats should be capitalizing on their stronger position by demanding a budget that fits the needs of the moment: one that ends the painful cuts caused by sequestration, invests in infrastructure and job creation, and provides desperately needed resources to state and local governments. Democrats and their allies must recognize that their current advantage is not guaranteed or permanent, and it is not so fail-safe that the party can abandon principle in the shaping of a budget deal. They now have an opportunity to redefine the debate fundamentally, away from the absurd focus on deficit-cutting—the deficit is actually plummeting—and toward the real crisis of our time: high unemployment and record inequality.

Last week, the editors wrote about the GOP's shutdown strategy.