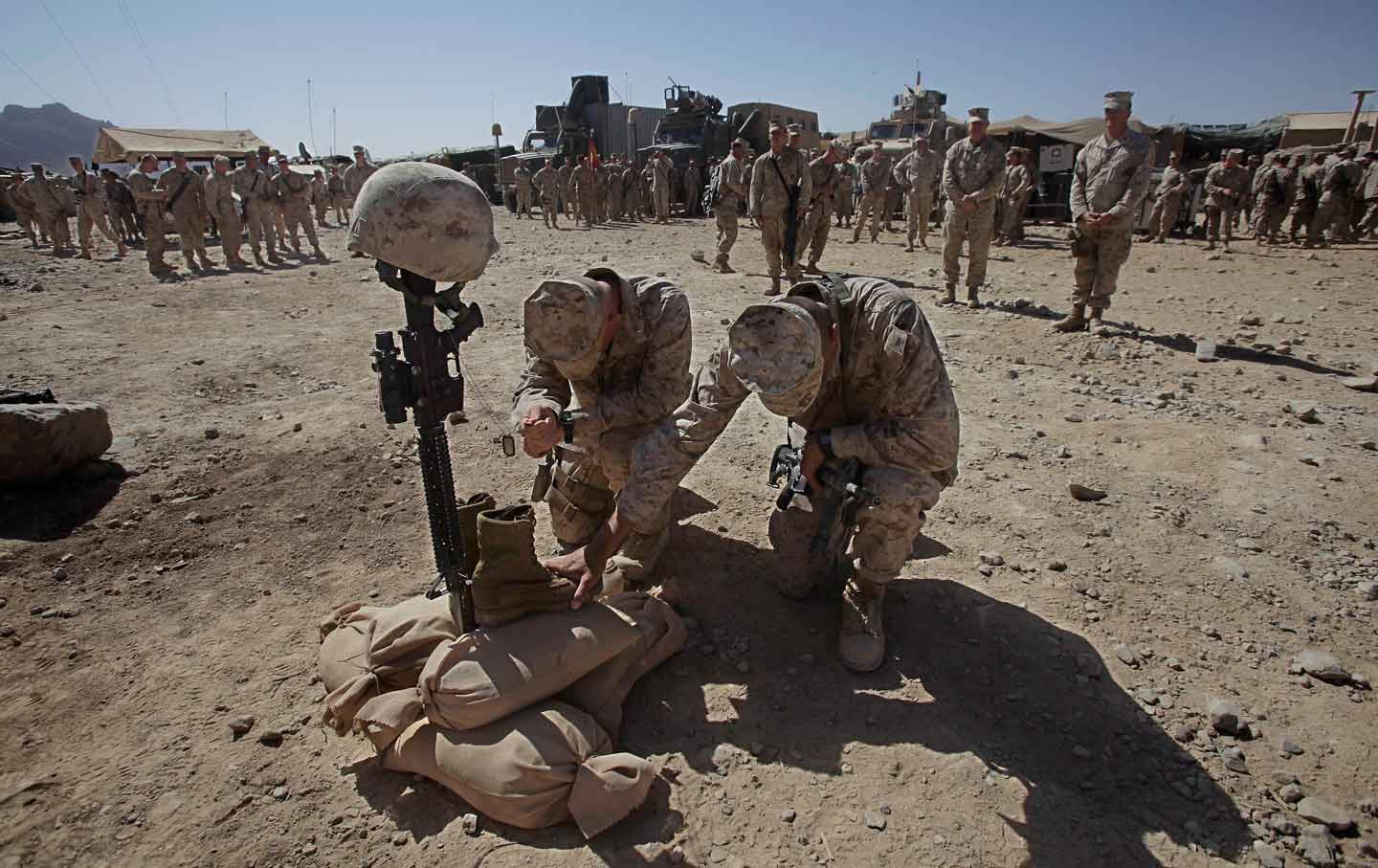 I remember the day I broke. I was a young captain in command of an 82-man cavalry troop in the heart of Taliban country—in Kandahar, Afghanistan—and I was deep into one of my regular manic episodes. At that moment, I was in the midst of writing an angry—definitely hopeless—stream-of-consciousness screed, which topped out at some 8,000 words, to my sociopathic squadron commander. My verbose, yet well-argued, treatise expressed my opposition to his next planned assault (with my unit in the lead) into yet another remote, abandoned, booby-trap-riddled village. I was by then obsessed with protecting my troopers from needless death or maiming. Mid-sentence, one of my subordinate lieutenants rushed into the office to remind me: “Sir, you have to give a memorial address in like 30 minutes!” Shaken out of my trance, I remembered (had I really forgotten?) that it was almost time to give my obligatory speech in remembrance of one of my young soldiers, blown to pieces just days before.

I hid my surprise, assured the lieutenant I’d be ready soon, and pulled out a 5″ x 7″ index card to hastily jot down some bullet notes for my impending address. Normally, I thrive in public speaking, but suddenly I drew a frightful blank. I don’t know anything about this kid, I realized. He was young, new to the unit, and—though I’d heard glowing reports on his discipline and work ethic—I couldn’t conjure a single personal detail about, or one-on-one interaction with, him. Maybe a better officer would have. Still, I threw something together, gave a passable speech—which was, as always, filmed for the soldier’s family—then retreated to the designated “smoke pit” to share some cigarettes with his platoon mates. They were sort of numb, frightened for their own fates, yet alarmingly resigned to their personal hellscapes. None, not a one, had any particular affinity for the Afghan people, nor did they believe in the mission. I listened carefully as they swapped stories about their fallen friend. Then it struck me: I’d never be able to explain to this kid’s mother just what he’d died for on that dusty trail in rural Afghanistan.

That was back in 2011, year 10 of what has become America’s 18-year war—and its longest ever. Unlike the war in Iraq, which I’d joined just after West Point graduation, I’d entered Afghanistan already skeptical of the nation’s post-9/11 wars. The trick was to escape a year-long tour with as many of my troopers’ lives (and limbs) as possible. When our unit finally made it home in January 2012—though with three fewer lives and several fewer limbs—I rapidly fell apart. It was a legitimate, if sudden, mental health collapse, brought on, I suppose, the moment I stopped white-knuckling it through 18-hour days borne under the substantial weight of command responsibility.

In the years that followed, I lost two wives and never quite shook bouts of crippling depression and anxiety. And the war, it never stopped churning. But I also became an outspoken anti-war activist, criticizing the wars—in Afghanistan, in particular—which I long knew were unwinnable and based on lies.

Earlier this week, we learned that our leaders also knew the war was a fiasco, doomed to fail. But, unlike many of us, they chose not to speak out. Instead, as The Washington Post revealed in a series of stunning articles based on what it has labeled the Afghanistan Papers—a trove of previously classified documents that it is calling a “secret history of the war”—dozens of consecutive generals and senior US officials had repeatedly lied about, omitted, and obfuscated the facts to give an illusion of progress in that war.

Examples abound. As early as 2003, Bush’s hawkish secretary of defense, Donald Rumsfeld, apparently admitted, “I have no visibility into who the bad guys are” in Afghanistan. More than a decade later, during the late Obama years, retired Army Lt. Gen. Doug Lute (once the Afghan War “czar”), conceded to one of the interviewers, “We didn’t have the foggiest notion of what we were undertaking.” Perhaps even more troubling, in a throwback to Vietnam War–era stat-fudging, one unnamed army colonel confessed, “Every data point was altered to present the best picture possible.”

As I read through these confessions, I felt somewhat vindicated, but mostly I felt deeply sad. What had it all been for—the 2400 American lives lost, the trillion dollars spent? And what of the cost to the real victims—the Afghan people? More than 100,000 Afghan civilian and security force personnel have been killed thus far. The US military wasn’t responsible for all those deaths—the vicious Taliban have been gleeful contributors to the carnage—but 2018 wasn’t just the deadliest year of the war; it was also the first in which American and allied Afghan troops killed more civilians than the Taliban did.

The Afghanistan Papers don’t try to answer these bigger questions, and perhaps they can’t, but their significance is nonetheless profound. At 2,000 pages, they are nothing less than the Pentagon Papers of my generation. These documents, however, are hitting the news in a very different time and context. In 1971, there were still tens of thousands of anti-war protesters in the streets, and Daniel Ellsberg’s leak of the documents inflamed the movement. Today, in the absence of a broad military draft, and with President Trump’s impeachment-as-entertainment hearings dominating the airwaves, I’m not so sure the Afghanistan Papers will make much of a splash.

In a real republic, these papers would be explosive, triggering investigations, denunciations, and serious policy conversations. The Senate would hold a lengthy inquest, such as the Fulbright hearings on Vietnam or the Church Committee on CIA abuses, in addition to producing substantive reports similar to the 9/11 commission or the McCain/Feinstein CIA torture report. But I’m skeptical. If this Afghan disclosure doesn’t generate thorough investigation and accountability, can the concerned citizenry ever again count on Congress? Probably not.

The same question might be asked of our news media. Major publications still give prominent placement to the vacuous mea culpas from prominent Afghan war commanders, like David Petraeus, and the big three cable networks offer unlimited time to the should-be-discredited likes of Petraeus, Stanley McChrystal, and a litany of other Bush/Obama-era military and intelligence officials. Meanwhile, folks like myself, Scott Horton, Matthew Hoh, retired colonels Andrew Bacevich, and Daniel Davis—who were right all along about the war in Afghanistan—struggle mightily to place a rare column in the major newspapers. The game is rigged.

Still, try as they may (and they will), the lying, failed generals, can’t escape the people they sent into war. (Unfortunately, the people they made war on is a different matter). Just last week, I randomly bumped into General Petraeus in line for the bathroom at LaGuardia airport. I thought it odd that no one seemed to recognize the man—who did more to prolong the forever wars than any other public figure—but I did. Against my better instincts, I stopped him. “Hello, general. I’m sure you don’t remember me, but we briefly met in Iraq in 2007,” I said. Though he was cordial at first, I noticed him gazing at my chest and then he quickly hustled off. I looked down and had to laugh. I’d completely forgotten that I was wearing my “Iraq Veterans Against the War” T-shirt.

Military Officials Sent Us to Fight, Kill, and Die in an Unwinnable War

Where Is the Outrage Over the War in Afghanistan?

“King” David Petraeus can comfortably hide behind his seven-figure salary think-tank/consulting jobs and unlimited access to the mainstream media. So can his entire generation of flag officers who lost two wars, and not one of whom resigned in protest in the face of unwinnable forever conflicts. But every once in a while, they have to look me, and hundreds of thousands of broken vets like me, in the eye.

Long ago, after the insane, absurd advice he received from his senior military advisers in the Bay of Pigs and Cuban missile crisis fiascos, President John F. Kennedy, himself a decorated World War II veteran, wisely concluded, “The first thing I’m going to tell my successor, is watch the generals, to avoid feeling that just because they’re military men, their opinions on military matters are worth a damn.”

I, for one, will be hard-pressed to ever trust them again. Much of the blood of a war that shouldn’t have been fought, and that they might have stopped, lies on their hands.