Having just celebrated Labor Day and entering the final two months of the 2016 election cycle, now is a good time to pause and appreciate those members of the working class who are white and progressive. We hear so much about Donald Trump’s support among the white working class (usually defined as non–college-educated whites) and how that group has abandoned Democrats over the years that it’s easy to overlook white members of the working class who are progressive and do stand with people of color. There are more of them than one would think, and their numbers are sufficiently numerous to form a significant, and indispensable, part of a winning, progressive multiracial coalition—the New American Majority.

Can the Democrats Win Back White Working-Class Voters?

One would think from recent media coverage that every single working-class white person is wearing a “Make America Great Again” hat and pining for the days when African Americans couldn’t vote, immigrants of color couldn’t become citizens, and women were kept barefoot and pregnant in the kitchen. In reality, however, there are millions of white working-class voters who proudly cast their ballots for a black man running for president in 2008 and 2012, and millions have also expressed their preference for a white woman seeking the same office. In a country that held black people in chattel slavery for hundreds of years and refused to recognize any women’s rights separate from a relationship to a man until the 21st century, those votes by working-class whites are a big deal.

Progressive working-class whites are key to a winning coalition and accounted for 27 percent of Obama voters in 2012.

The obsessive focus on conservative white workers prompted me to ask in my book, Brown Is the New White, “What’s wrong with the white people we have? Can’t we show them some love?” As important as voters of color are to forming a governing New American Majority, progressive working-class whites are also a key component of a winning coalition, and they accounted for 27 percent of Obama’s voters in 2012.

It is true, for a variety of historical, psychological, and sociological reasons, that the majority of all white voters—including white working-class voters—tend to vote more conservative. Since 1976, the advent of exit polls that ask about racial background, an average of 55 percent of whites have voted for the Republican nominee for president, with 40.6 percent choosing the Democrat. 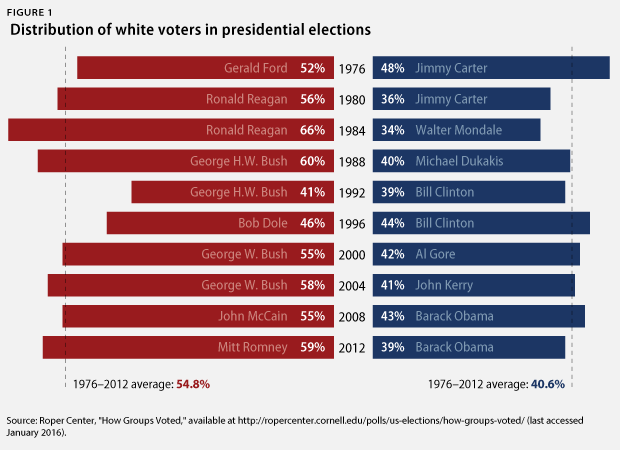 Chart courtesy of the Center for American Progress

Over the past eight years, Obama has run and won twice, and his share of white working-class support was 40 percent in 2008 and 36 percent in 2012. The current numbers for Clinton in the August 25 Quinnipiac University National Poll show her securing support from 35 percent of the white working class. College-educated whites and people of color account for the rest of her lead in the polls. That solid sector of progressive working-class whites is an essential component of her coalition and vital to her prospects in November.

Given the prevalence of systemic racism in all sectors of society—combined with the lack of effective countervailing communication from progressives consistently challenging racism—it’s actually kind of remarkable that so many members of the white working class vote progressive.

Underappreciated, yet vitally important, is the historical role that the progressive white working class has played in supporting struggles for justice and equality throughout US history. Many, although certainly not all, white labor leaders and unions sided with the civil-rights movement in the 1960s and the struggles in Selma for democracy and equality. The success of those efforts led to the passage in 1965 of the Voting Rights Act and Immigration and Nationality Act. Those two revolutionary laws, which removed the racial restrictions from voting and immigration, have resulted in the demographic transformation of the American population and electorate, resulting in the percentage of people of color in the country tripling from 12 percent in 1965 to 38.2 percent today. With so many people of color now able to cast ballots, the strategic significance of the white workers who vote progressive is enhanced.

The political implications of this reality are profound and still not yet fully embraced by those who run and fund Democratic campaigns. The incessant attention to the conservative bloc of the white working class can distort electoral strategy and policy priorities. The inaccurate and unfounded belief that Democrats have to attract support from conservative whites—or at least avoid alienating them—results in a self-destructive, downward spiral of watering down the progressive political agenda in a vain attempt to make headway among that sector. We saw the futility and disastrous consequences of that course of action in 2010 and 2014 when congressional Democrats ran from their progressive principles and their black president and sought to distance themselves from the Affordable Care Act and immigration reform.

This is not to say, “To hell with conservative white working-class workers; we don’t need ’em.” Our policy agenda should absolutely make conditions and life better for everybody, whether they want improvements like higher wages and universal health care or not. Connie Schultz highlighted the impact of a broad-based progressive governing agenda when she wrote about a conversation she had with a taxi driver who said to her, “There’s not one good thing about Obama.” Schultz’s first thought was, “Another white, working-class guy who’s angry with the government.” Toward the end of the ride, however, the driver shared that his wife had a chronic health condition and that their family was saving significant money because of their coverage under Obamacare. Which prompted him to admit, “OK, maybe there are some things to like about Obama.”

Schultz’s story shows that the way for progressives to win over the majority of the white working class is by gaining political power and passing progressive public policies, not wasting time and money during an election season trying to persuade people predisposed not to agree. In order to get into a position where progressives can govern, we have to make smart and strategic decisions that secure 50 percent plus one of the people casting ballots. Then we can pass public policies that help everybody.

Obviously, America does not have a sterling record on issues of racial equality and justice. But throughout history, from the abolitionists to the civil-rights workers to the allies of the Black Lives Matter movement today, a meaningful minority of whites has consistently sided with people of color. And for all the focus on those working-class whites who vote conservative, there are millions of unseen and unsung members of the white working class who are progressive voters. And because there are, we have a progressive New American Majority. For that, we should all express our gratitude and appreciation.