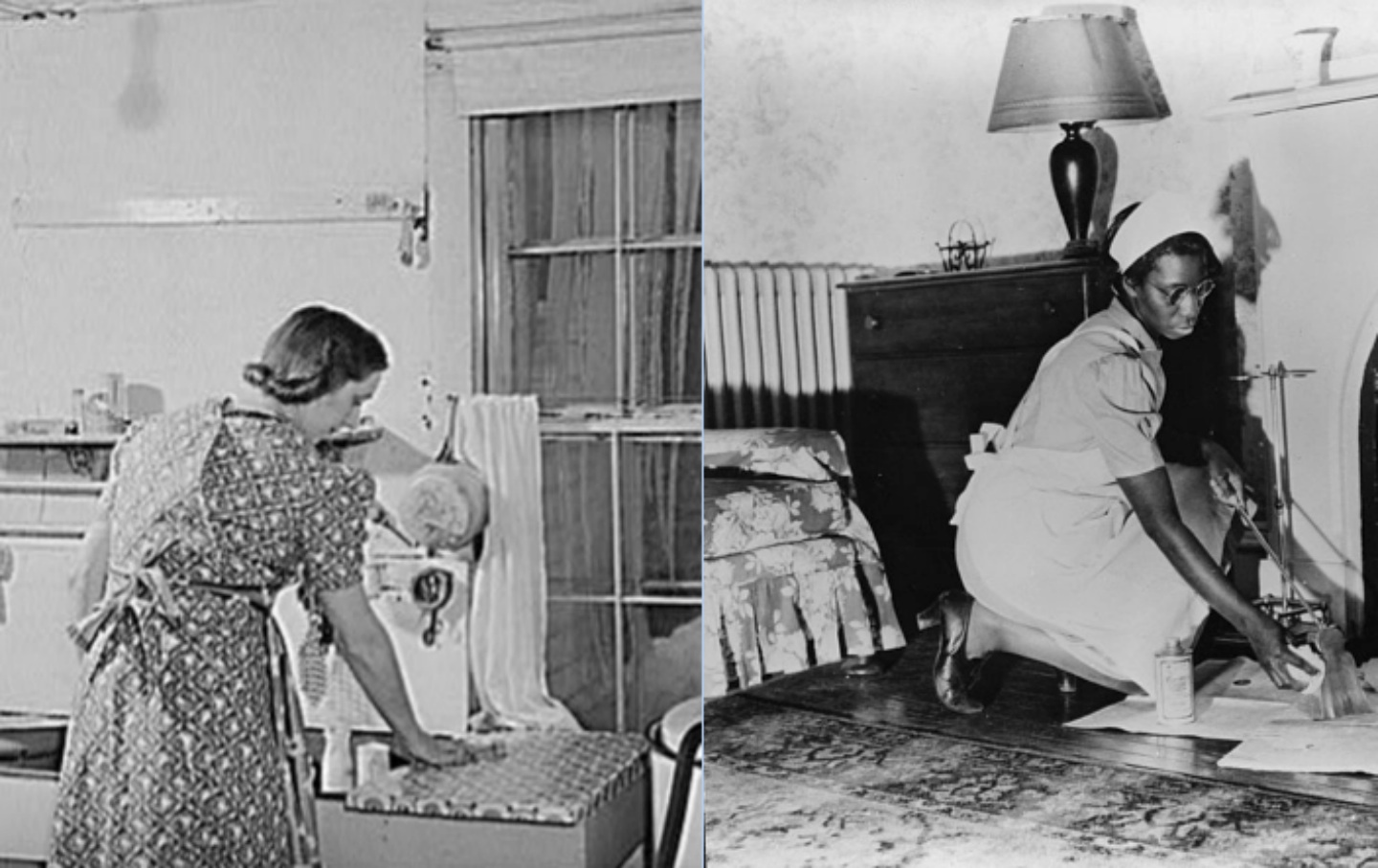 Since its founding in 1865, The Nation has been a home for writers instigating, reporting on and arguing about struggles for social and economic justice. We have held fast to our “Nation Ideals”— from racial justice to feminism, from a fair economy to civil liberties, from environmental sustainability to peace and disarmament—throughout our 150-year history. During our anniversary year, TheNation.com will highlight one Nation Ideal every month or two. We’ll celebrate by asking prominent contemporary Nation voices to read and respond to important pieces from our archive. Below, Michelle Chen responds to an exchange about a radical new campaign for “Wages for Wives” that ran in The Nation in 1926. Learn more about our 150th anniversary events and special content here.

Amidst exploding stock markets and hedonic speakeasies, the middle-class homemaker of the Roaring Twenties wrestled with the question of power. In 1920, women had won the right to vote, but the fight for sexual and economic emancipation was just shifting into high gear. In the workplace, women achieved visibility as secretaries, shopkeepers and machinists; in dancehalls and boardwalks, ladies emerged as embodiments of leisure. Inside the home, the “New Woman” was redefining herself as a modern economic citizen, no longer only an assembly-line maven or a freewheeling flapper. In 1926, long before Wages for Housework emerged as a second-wave feminist slogan, The Nation debated “Wages for Wives,” and then like now, this absurdly reasonable concept titillated and threatened.

Arthur Garfield Hays, a leading civil libertarian lawyer, savaged the idea, presenting a dystopian scenario in which an idealistic couple tried to achieve equality by calculating a decent wage for the wife’s labor. Their naive quest entangles them in fiscal projections of every batch of laundry washed, each hour of childrearing, and even the theoretical opportunity cost of the woman having forgone another choice of husband. This wretched coupledom, not surprisingly, deteriorates into bitter anxiety, each partner so fixated on business matters, that they came to prefer the company of others for “off hours” leisure.

Eventually, the loving wife calcifies into an automaton, while the husband does little more than sign the checks, their vows reduced to a sound financial transaction. Even after their romance evaporates and the man moves into a hotel, he remains contractually obligated to pay for “services rendered.” The ousted master of the household wistfully contemplated, Hays wrote, “whether his wife still thought she should receive merely what she earned. He remembered that the biggest item paid to her was his sweetheart.” Hays (a recent divorcée) sounded an alarm to couples—or rather, to aggressively modern women—not to let the norms and practices of the workplace run roughshod over the domestic sphere.

In her rebuttal, Doris Stevens offers a new paradigm for the labor of love. Having worked as a teacher, social worker and organizer with the National American Woman Suffrage Association, she proposed a rebranding of the home as a “joint stock company,” appealing defiantly to market logic: Women’s work was labor, caregiving was an indispensable economic contribution—ergo, fair wages were long overdue.

In the political economy of the household, Stevens argues, the matriarch serves as “educational guide until at least adolescence, a profession moderately well paid” when done by formal teachers. She also juggles roles as a bookkeeper, chambermaid, head buyer, baker and “mistress of the family wardrobe, a job well paid when done by a seamstress.”

So the contemporary moment of progressive feminist consciousness demanded a reappreciation of the career of a family caregiver. Women provided not only the essential labor of childcare but also served as supreme managers of the family progeny, the ultimate wealth (and the main investment of the man’s extra-household earnings). Wasn’t it counterintuitive for a man to toil all day to bring home a so-called “family wage,” only to invest it in an enterprise that ran on what Stevens pointedly calls slave labor? And the only way to guarantee a loyal workforce was, after all, to pay fairly.

Stevens acknowledged that wages were not feasible for most households, especially not for couples stretching a single modest income. She understood it could rankle husbands terrified that a rebellious wife might upturn their castle with a work stoppage.

But her argument is a subtle one. Marriage, she argued, should be seen as a social contract between equals that embodies the most sacrosanct and productive of joint ventures. The partnership hinges on mutual consent and balanced rights and responsibilities over the governance of household assets. Meanwhile, the government should take into account women’s contributions to the maintenance of the household, with the census counting her domestic work as a job. It was, after all, the economic pillar that enabled all other forms of industry.

So Stevens proposed a progressive household labor structure that would, in our present-day parlance, let a middle-class woman “have it all,” personal dignity and economic autonomy, as well as mutually supportive family bonds. This did not mean wives should all be on payroll; it meant they should be treated as having an equal share of family wealth.

But Stevens only lightly broaches the potential solidarity between women in the home and low-wage women workers. Writing before domestic worker activism emerged as a widespread women’s movement during the Depression, Stevens mentions only in passing that women were often hired as domestic workers, housekeepers and nannies—for wages probably far below the author’s ideal women’s wage. (And her idea of women’s work doesn’t contemplate the piecework system in which wives took home factory materials to combine industrial labor and homemaking work.)

However, she does link respect for wives’ home-economic contributions to women’s overall economic prospects, noting that devaluing home-based labor undermines a woman’s ability to pursue a regular job: “So grateful is she to be paid at all that she accepts wages far too low.” At the same time, simply assuming a single standard wage can be paid for all housework, whether done by a mother or hired help, would be unfeasible. The wages merited by a typical skilled housekeeper would be lost if she chose to perform the same work in her own household. Due to her husband’s relatively low income, Stevens explains, “working for her husband below the wage she herself has helped to standardize, she destroys her own gain and that to housekeepers, just as any scab worker does.” Although Stevens does not dwell on problems facing poor women who have no choice but to toil outside the home, she does propose a self-contained solution for women in modest-income households—“that class in which no domestic service can be summoned to lighten the tasks.” Rather than a strict wage system in which a wife is simply an employee, Stevens advocates for a cooperative home-based labor model with husband and wife as partners: the bottom line is equity and mutual appreciation.

Stevens’s labor theory is essentially conservative, centering the woman’s cultural role as caregiver above all—seeking a labor arrangement to achieve “peace and happiness in the home,” not direct task-sharing between spouses, and not a role for the man as homemaker. Yet she trenchantly reassesses household labor in mainstream economic terms: The educated wife could, after all, earn a handsome salary as educator to another’s child. If she wasn’t doing that, what would be the rewards of motherhood?

Stevens did not quite prefigure the Wages for Housework movement of the 1970s. This postmodern variant of Stevens’s proposal, originating in Padua (Italy) and New York, revolved around women’s needs for sexual and economic empowerment in tandem; the 1970s feminist vision of wages for housework wasn’t limited to wifely duty: It was a woman-centered philosophy of work, ranging from household chores to providing sexual pleasure—all of which were degraded or ignored by industrial capitalism. While women’s work, including her “emotional labor,” was constantly demeaned, campaigners argued that gender-based economic oppression reduced a woman’s body and labor to a unit of production and reproduction. Like the civil rights–era Welfare Rights Movement, this ethos channeled feminist demands not just for social equality for marginalized women but for an equal level of social choice: women embodied the kind of unwaged work that couldn’t be truly compensated without a social transformation and cultural revolution. Why should a working-class single mom or childless woman be denied the economic sovereignty that a wealthy female professional took for granted? Wages for Housework presented a holistic, if abstract, worldview of gender equity under, and beyond, capitalism.

Stevens partially anticipated present-day feminist critiques like those of radical economist Nancy Fraser, who wrote recently in The Guardian that postmodern feminism had swerved into pseudo-egalitarian neoliberalism by embracing “a one-sided focus on ‘gender identity’ at the expense of bread and butter issues.” To rescue feminism from the self-defeating ambition of striving to “have it all,” Fraser advocates the rethinking of all work by collapsing the false dichotomy of labor inside and outside the home. That would mean “militating for a form of life that de-centers waged work and valorizes unwaged activities, including—but not only—carework.” Rejecting the neoliberal mythos of “leaning in,” which excludes women who are too poor to even have options for work-life balance, advocates of progressive carework want care to be freely given but not for free.

Organizations like A Better Balance and National Domestic Workers Alliance are rethinking care work, as Stevens did, as an ecosystem of relationships across state, home and labor market. They champion policies that provide for complementary roles between unpaid and paid care services, and fair wage structures, seeing equity for service workers and families as mutually dependent. Women who want to care for a loved one at home must be entitled to paid family leave, comprehensive healthcare and other welfare supports structured around the priorities of family in tandem with career. A domestic worker too deserves not only equitable compensation but also control over her labor, including her schedule and career path, so she can tend to, or secure other childcare for, her own family. In the musical chairs of women’s work, a fair labor structure would be flexible enough to encompass diverse needs but principled enough to recognize that at the end of the day, all work, public or private, centers on one goal: building a stable, nurturing home and, by extension, a healthier society.

Generations earlier, Stevens envisioned women working alongside men in a joint partnership that enabled both spouses to “have it all”—for real. Writing before the Depression, the Kelly Girl and the Equal Rights Amendment, Stevens might not have contemplated a future in which neoliberalism disempowered all labor, and eviscerated women as both carers and workers. But the “joint stock company” model still works as a conceptual space to reimagine work through a labor theory of family values.

Next, read Dani McClain on The Nation’s 1989 special issue “Scapegoating the Black Family.” And learn about the key moments in the fight for gender quality in our timeline: Radical Histories: Feminism, Sex & Gender. Learn more about all our 150th events and special content here.