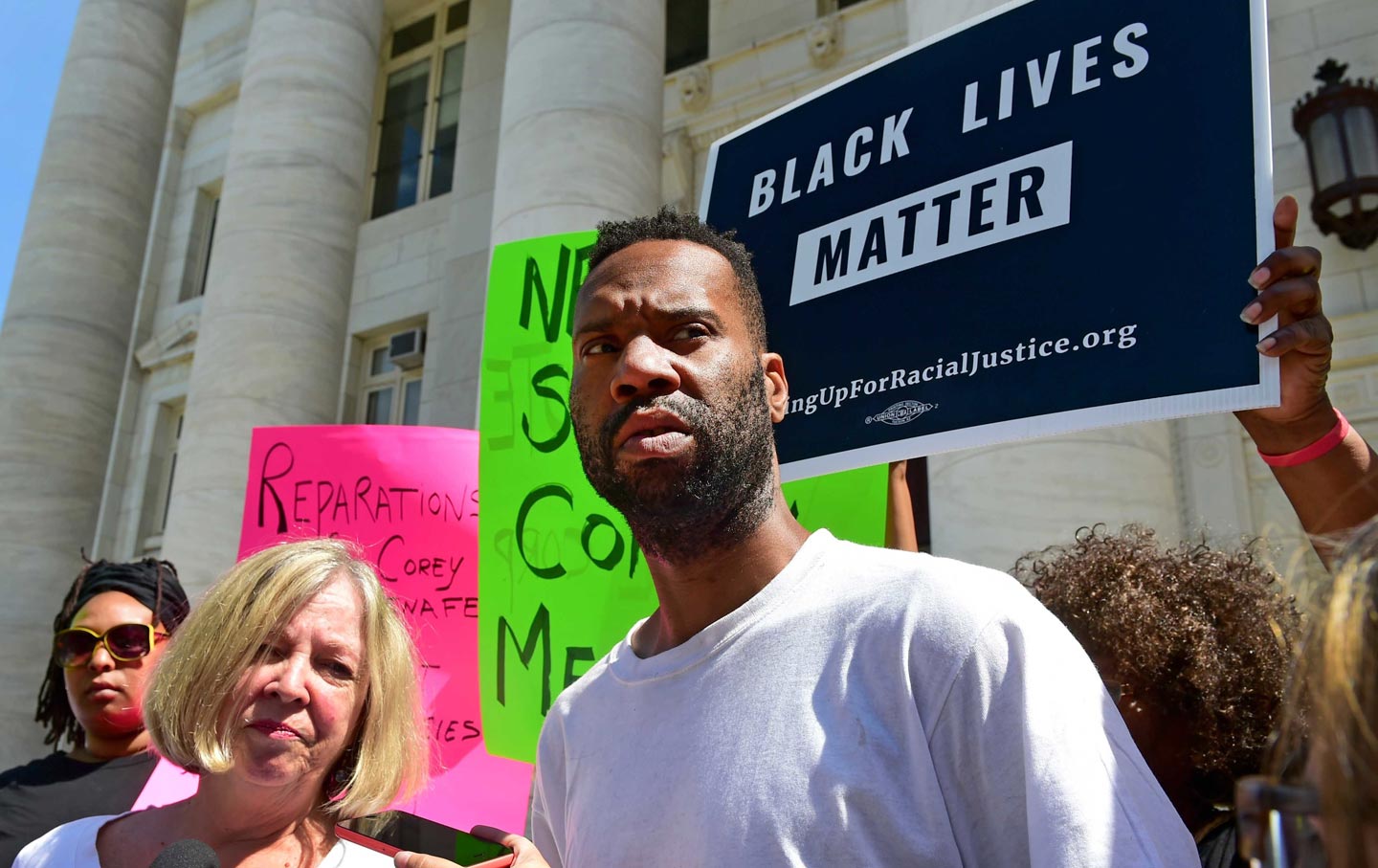 According to the broken-windows theory of social disorder, it takes just one shattered pane of glass to unleash a cascade of chaos in a neighborhood. The authorities might fear this, but for others, a little chaos can occasionally be liberating.

Such an occasion arrived for Corey Menafee one morning in June on the Yale University campus, when the custodial worker drove a broomstick through a small stained-glass window that depicted an eerily bucolic scene of enslaved blacks carrying bales of cotton.

The vestige of American slavery had long gone politely ignored amid the polished Oxonian interiors of the rarefied university (disclosure: The author is a Yale alumna). But that morning, Menafee recalls matter-of-factly, “I just got tired of seeing that image.” During a break from his shift in the Calhoun College residence dining hall (then mostly empty because of summer vacation) he says, “I don’t know, something inside me is like, that thing has to come down.”

After the glass came tumbling down, Menafee heard his manager yelling about destroying university property.

“There’s just a moment of sobriety, where you’re like, uh-oh… you can’t take it back.”

Anticipating the aftermath, Menafee went to his locker room and shaved, to look decent for the cops, he says, because, “In my experience, people deal with you better when you’re clean shaven than when you’re all scruffy.”

Then came charges of reckless endangerment and first-degree felony “criminal mischief”—and he had to resign from the job he’d held for eight years.

However, Yale later announced it would not pursue legal action against Menafee and was “not seeking restitution.” It wasn’t his clean-shaven look that did it but a groundswell of public support. Dozens of activists, students, and faculty members rallied at his court hearing in early July, supported by a pro bono attorney. The local advocacy group Narrative Project circulated a petition calling for the charges to be dropped and posted this statement on Facebook: “We cannot continue to stand by while people of color across this country are being unjustly punished in a judicial system that was never meant to cater to them.”

The window smashing resonated with the nationwide wave of revolt in response to police brutality and racism, including a recent protest for Black Lives Matter on the New Haven Green, just down the street from Calhoun College, controversially named after the infamous advocate for slavery John C. Calhoun.

The 38-year-old New Haven native is gobsmacked by his new fame. Before Yale he had done stints in retail and substitute teaching. The most activism he had ever undertaken, he says, was a side job during college, passing out campaign material—he doesn’t remember for which candidate.

Following the explosion of public criticism, last week the university offered to reinstate Menafee “in a different setting” on campus. His rehiring, which had been strongly backed by his union, UNITE HERE, was apparently conditioned on accepting some form of contrition—a “suspension,” which would be counted as the time served since resigning. (UPDATE: Menafee has reportedly been reinstated on the condition of a gag order on media appearances –presumably, the price of readmission to Yale’s workforce is silence on the institution’s unseemly side.)

Though he did not see the window smashing as a form of activism per se, at the time, Menafee was aware of the controversies surrounding Yale’s racial history as well, including campus-wide protests over the name of Calhoun College and other visual emblems of black oppression. And he grew up experiencing firsthand the structural impacts of this history on New Haven, which has the fastest-growing income gap of any city nationwide, along with deeply impoverished black enclaves overshadowed by a real-estate empire fueled by Yale’s $26 billion endowment.

But the window came into sharp focus about a week and a half prior to the incident, he recalls, when a young alumnus, visiting the campus for Reunion Week with his daughter, pointed out the window and how it had bothered him to see it as a student.

Menafee noticed the image for the first time and was haunted by it. “If you ever been somewhere, and someone’s behind you staring at you and you can’t see them or hear them but you can just feel someone staring at you.… In my subconscious I was just aware that it was there now.”

Asked if he regretted his action, he answered with a duality. The better way to resolve a dispute would be to “sit down and have an intellectual discussion,” rather than “just go ahead and smash someone else’s property. I don’t suggest that, I don’t promote that, I do regret that.”

However, “there’s a plethora of other people who felt the same way,” he adds. “So in that sense, I don’t regret it, because I’m not the only one who felt offended by that image.”

And he does link his action to the current political moment: “People are tired of being victims of…not only racial inequalities, but all types of inequalities—religious, sexual…and they’re standing up for themselves…. There’s resistance from powers that want to keep things the way they are—conservatives…. That’s just a natural power struggle that exists all over the world.”

Instead of seeking “restitution,” Yale is now turning to historical reckoning. Its Committee on Art in Public Spaces is now planning to remove other Calhoun windows, to be “conserved for future study and a possible contextual exhibition, and replaced temporarily with tinted glass.” A new commissioning for a redesign is planned, “with input from the Yale community, including students.”

But if Menafee’s broomstick broke the historical silence, is a voice missing from the planning process? As historian Craig Steven Wilder noted on Democracy Now!, while alumni and administrators have led debates on addressing controversial symbols on campus, “Excluded from the conversation have been the people who actually clean our offices, cook our food, move the campus buses around. But they actually spend a lot more time being impacted by those sort of visual reminders of slavery than most of the rest of us do.”

Menafee himself has no suggestions for replacing the image. He just hopes it will be “something that’s a little more culturally sensitive.”

But he may have unique insight on what will ultimately replace the shattered stained glass, recalling something he learned at Yale: the institution’s motto, Lux et Veritas, Latin for “Light and Truth.”

“If you truly believe in your motto and you want to enlighten people,” he says, “then why would you want to cast a shadow of oppression over one of your buildings?”

He sees things in a clearer light now too. After the glass broke, he recalls, “I just walked away, and said, ‘You know, it looks a lot better now.’”