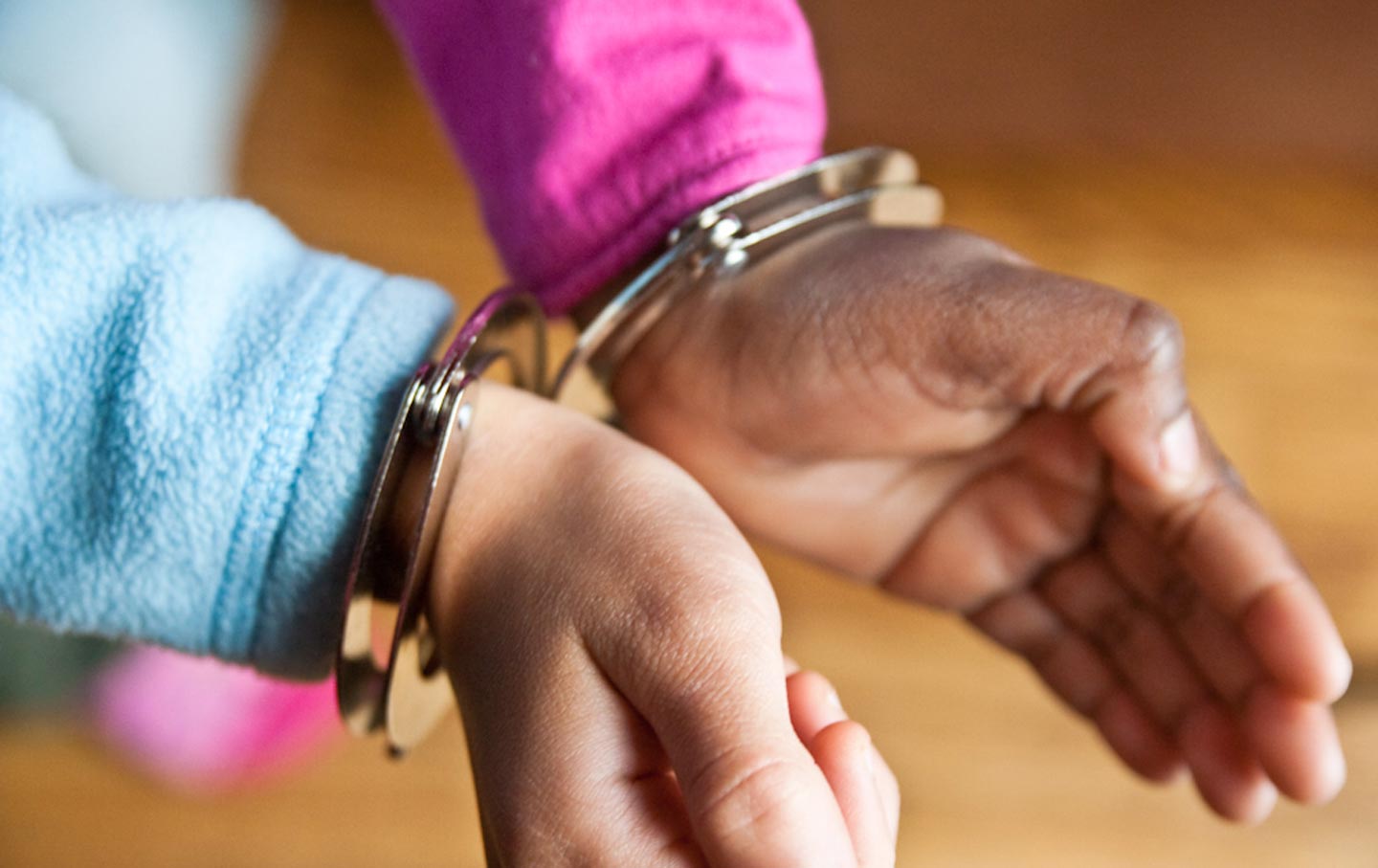 The mainstream media are abuzz with possible justifications for the videotaped brutalization of a South Carolina high-school student by a sheriff’s deputy assigned to the school. CNN analyst and former NYPD detective Harry Houck opined that perhaps she had it coming because she didn’t respect the authority of the officer. Sheriff Leon Lott went so far as to claim that the young woman punched the officer as she struggled against a chokehold and while being flipped upside down at her desk.

All of this, however, misses the point: A police officer had no business setting foot in that classroom in the first place. As the Justice Policy Institute pointed out in an exhaustive 2011 study, we should “remove all law enforcement officers from schools.” Abundant research shows that having police in schools does nothing to reduce crime, contributes to an atmosphere of fear and intimidation, and, most importantly, is at the center of the criminalization of young people of color.

Over the last 20 years there has been an explosion in the number of police officers stationed in schools. This has been one of the most dramatic and clearly counterproductive expansions of police scope and power in postwar America. In 2009, The New York Times estimated that there were more than 17,000 school-based police officers. According to the Department of Education and the Department of Justice, 28 percent of all schools now have armed security officers assigned to them.

While the origins of “school resource officers” (SROs) can be traced back to the 1950s, there was a dramatic change in their number and focus in the 1990s—thanks in large part to the Justice Department’s “COPS in Schools” program, which gave out over $750 million in the late 1990s and early 2000s, resulting in the hiring of an additional 6,500 new school-based police.

This increase in the number of school-based police is tied to a variety of social and political factors that converged over the course of the 1990s. First was the emergence of the “juvenile superpredator” concept developed by conservative political scientist John DiIulio. In 1996, he argued that the United States was getting ready to experience a wave of youth criminality driven by the evils of the crack trade, high rates of single-parent families, and a series of racially coded concerns about declining values and public morality. He predicted that by 2010 there would be an additional 270,000 of these youthful predators on the streets, leading to a massive increase in violent crime. These young people were described as hardened criminals, bordering on sociopaths: “radically impulsive, brutally remorseless…elementary school youngsters who pack guns instead of lunches” and “have absolutely no respect for human life.” Given these youths’ fundamental disregard for the welfare of others, DiIulio and others argued that there was nothing to be done but to get them excluded from settings where they could harm others, and ultimately to incarcerate them for as long as possible.

The second major factor was the Columbine school massacre of 1999, in which two students at the Colorado high school murdered 12 of their fellow students and a teacher, despite the presence of armed police in the school. In keeping with the broader ethos of get-tough criminal-justice measures, the response was to increase the presence of armed police in schools rather than deal with the underlying social issues of bullying, mental illness, and the availability of guns. A similar dynamic emerged following the 2012 Sandy Hook shooting in Connecticut.

These events meshed with the broader trend towards harsher punishments that was driving the rise of mass incarceration more generally. Politicians had already embraced the idea that criminality is a deeply embedded moral failing that is largely impervious to reform-oriented measures. As a result, the only appropriate response is long-term incarceration, as seen in the rise of “three strikes” laws and other mandatory minimum-sentencing schemes. In this political environment, every public-safety threat was immediately turned into another opportunity to roll out more punishment and control.

And President Bill Clinton was more than happy to join in. In 1994, he introduced the “Gun-Free Schools Act,” which ushered in the wave of “zero tolerance” school-discipline policies. Following that lead, legislators at all levels, along with school administrators, embraced a raft of harsh disciplinary codes, metal detectors, and the placement of huge numbers of police in schools.

“Broken windows”–oriented enforcement has also found its way into school disciplinary procedures. Manhattan Institute fellows Abigail and Stephan Thernstrom, in their 2003 pro-charter school book, No Excuses: Closing the Racial Gap in Learning, found widespread adoption of broken-windows policies and lauded them as a way to instill greater classroom discipline through strict rule enforcement with ever-increasing punishments for infractions.

Over time, the discourse around such methods was transformed into “sweating the small stuff” and “no excuses”–based discipline. While these phrases evoke dedicated teaching professionals, what they really meant was creating ever-more-restrictive rules and increasing the frequency and severity of punishments. These “no excuses” disciplinary procedures have played a role in weeding out students who may be a drag on all-important standardized test scores. Black boys, in particular, are being driven out of these schools not for educational failure but for failure to sit still in class and wear the right color of shoes. PBS NewsHour found charter schools in New York City that were suspending kids as young as kindergarten age for behavioral infractions. These children then disproportionately leave the charter schools, in part because parents can’t manage the constant summonses to school for disciplinary conferences and suspensions.

These policies have led to the growing criminalization of young people, despite falling crime rates. One study shows that schools with SROs had nearly five times the arrest rate of non-SRO schools, even after controlling for student demographics like race and income. The impact of these policies has been particularly harsh for students of color, especially those with disabilities. Schools with high percentages of students of color are more likely to have zero-tolerance policies and generate more suspensions, expulsions, and arrests. A 2011 study by the New York Civil Liberties Union found that students with disabilities are four times more likely to be suspended than their peers, which in turn leads to more involvement with police inside and out of school.

School-based police are using high level of force against students, including assaults, pepper spray, and Tasers. According to a report by Mother Jones, between 2010 and 2015 at least 28 students were severely injured by SROs. In 2010, the Southern Poverty Law Center filed a class-action lawsuit against the Birmingham schools claiming that they were systematically using excessive force. They allege that since 2006 more thab 300 students had been sprayed with a combination of pepper spray and a tear-gas agent called Freeze +P that causes extreme pain and skin irritation and can impede breathing and vision.

A 17-year-old high-school student in Texas was tased by an SRO in 2014 while trying to break up a school fight, and critically injured by the resulting fall and a blow to the head. As a result, he spent 52 days in a medically induced coma. Surveillance video shows that the young man was actually stepping away from the officers when he was zapped.

In 2010, 14-year-old Derek Lopez was shot to death by an SRO in San Antonio. He punched a student on school grounds. Officer Daniel Alvarado ordered Lopez to freeze, and then chased him to a nearby backyard shed, where he shot him. Alvarado claimed that Lopez had “bull rushed” him as he opened the shed door. In August 2012, a grand jury declined to indict Alvarado.

Lower levels of force are even more prevalent. While no national data is available, local studies show heavy use of force. The Houston Chronicle, for instance, found that in the last four years police in eight Houston-area school districts reported 1,300 use-of-force incidents.

The massive expansion of school police is predicated on the idea that this makes schools safer, but this just isn’t true. Students in schools with heavy police presence consistently report feeling less safe than students in similar schools with no police. There is no evidence that SROs reduce crime or have prevented any mass-shooting incidents.

There are alternatives. A task force in New York chaired by former state chief judge Judith Kaye found that schools with non-police-based disciplinary systems were able to achieve a greater sense of safety for students, lower arrest and suspension rates, and fewer crimes, even in high-crime and -poverty neighborhoods. What was needed, but often not supplied by school officials, was a set of non-punitive disciplinary measures designed to keep kids in school while getting to the roots of disruptive behavior. In addition to better funding for high-needs schools more generally, officials should adopt a raft of evidence-based reforms that are cheaper and more effective than using the police. Programs like Positive Behavioral Interventions & Supports, Social and Emotional Learning, Behavioral Monitoring and Reinforcement, and restorative justice have all shown positive results in reducing discipline problems in schools without relying on the logic of control and punishment that characterizes police-based zero-tolerance and broken-windows discipline.

It’s time to take police out of the schools and reject the harsh, punitive focus of school management. Our young people need compassion and care, not coercion and control.