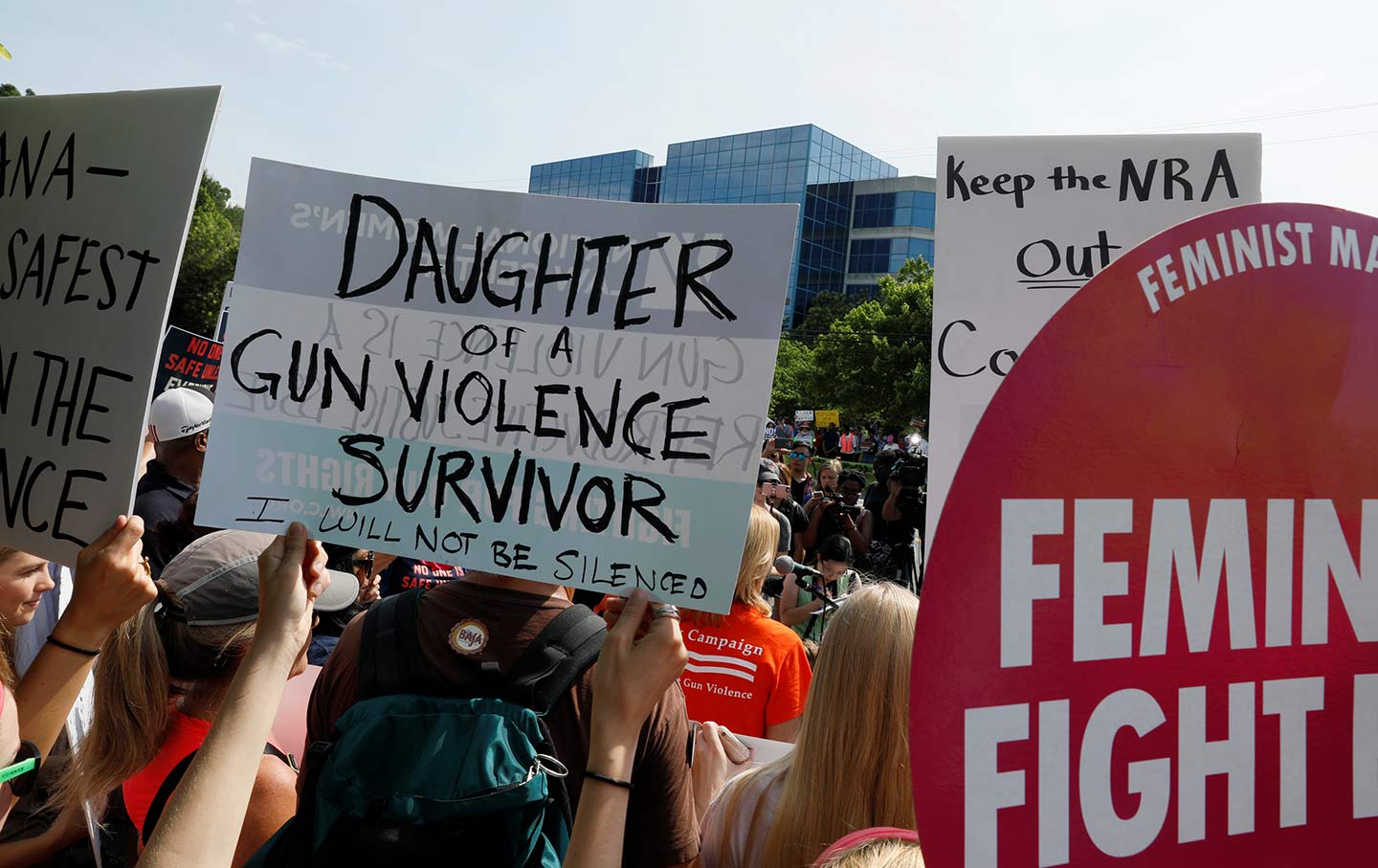 In the wake of Donald Trump’s election, gun sales resumed a years-long sales slump that started before Barack Obama entered the White House. Stocks in all the major gun companies plummeted after the election, and sales have not come close to returning to Obama-era heights.

One way the gun industry has tried to revamp its image and boost sales is by presenting guns, particularly small handguns, as effective, common-sense tools for self-protection. Many gun manufacturers have shifted from heavily marketing military-style assault weapons to instead rolling out small handguns that are explicitly pitched as citizen self-defense weapons. This campaign has been aimed heavily at potential female customers—the National Rifle Association has a “NRA Women” program, which offers free training to “female gun enthusiasts of all ages and skill levels,” and on NRATV, there is a popular series called Armed & Fabulous. The NRA recently hired Dana Loesch as a spokesperson in an effort not to have only grizzled old men like Charlton Heston and Wayne LaPierre as the public faces of the group.

At the 2016 Republican National Convention, the NRA’s top lobbyist, Chris Cox, used his valuable prime-time speaking slot to drive this very pitch home. “Imagine a young mother at home with her baby, when a violent predator kicks the door in,” he said. “The police will do their best to get there quickly, but their average response time is 11 minutes. So the question is, should she be able to defend herself with a firearm in her own home? Of course.”

That view of guns—as a protection blanket for women—has never resembled reality, and a new study underscores how wrong it is. In 2015, women were over 100 times more likely to be murdered by a man with a gun than to use it to kill a man in self-defense.

The Violence Policy Center looked at FBI crime data from 2015, the most recent year available. It’s the first analysis of the 2015 data on female homicide victims. The study found there were 328 justifiable homicides committed by private citizens that year, and only 16 involved a woman killing a man with a gun. Conversely, there were 1,686 cases where a woman was murdered by a man with a gun. Those are only single-victim, single-offender incidents, and exclude mass shootings, so if anything it’s an undercount. (Domestic abuse that turns deadly can end up claiming many victims beyond the targeted woman, like the incident in Texas this month where a gunman showed up at his estranged wife’s house and killed her and eight other people who were attending a football party.)

Contrary to Cox’s formulation of a random, armed bad guy crashing through the living-room window, a vast majority of those 1,686 homicides were domestic in nature. Ninety-three percent of the female victims were murdered by a man they knew, and 64 percent were wives or “intimate acquaintances” of the man that killed them. (This does not include ex-girlfriends; the FBI does not break that down.)

Critics might point out that this study counts only justifiable homicides but not incidents where a woman may have otherwise used a gun to defend herself without killing the male attacker—either by non-fatally wounding him, or just waving the gun around. That’s a fair point, though on the flip side, this also doesn’t count the women who are non-fatally injured by men with guns, nor intimidated by them.

The study’s homicide-to-homicide comparison just buttresses a lot of social-science research that unambiguously states that the introduction of a firearm to a home only increases the chance someone will be killed, particularly a woman. A 1997 study in the Archives of Internal Medicine looked at women’s risk factors for violent death in their home, and found that the risk increased threefold when a gun was present inside the house. A study in the Journal of the American Medical Association found that, not surprisingly, domestic incidents where a gun is used means it’s 12 times more likely that someone dies.

The high rate at which women are killed by guns is a uniquely American problem. In 25 high-income countries, America accounts for only 32 percent of the female population. But they are 84 percent of all female firearm homicide victims.

Sensible changes to the law could at least mitigate this violence, particularly since so much of it stems from domestic violence. But Republicans in Congress and the NRA have long opposed any such measures. In 2015, Senators Debbie Stabenow and Chuck Schumer introduced a measure that would, among other things, add “abusive dating partners, individuals under a court-imposed restraining order and convicted stalkers” to the list of people who cannot pass a federal background check for gun purchase. It did not become law. This year, Senator Debbie Stabenow and Representative Debbie Dingell introduced similar legislation in the Senate and House that would make people convicted of misdemeanor stalking crimes ineligible to purchase guns. Neither bill is expected to receive a vote.