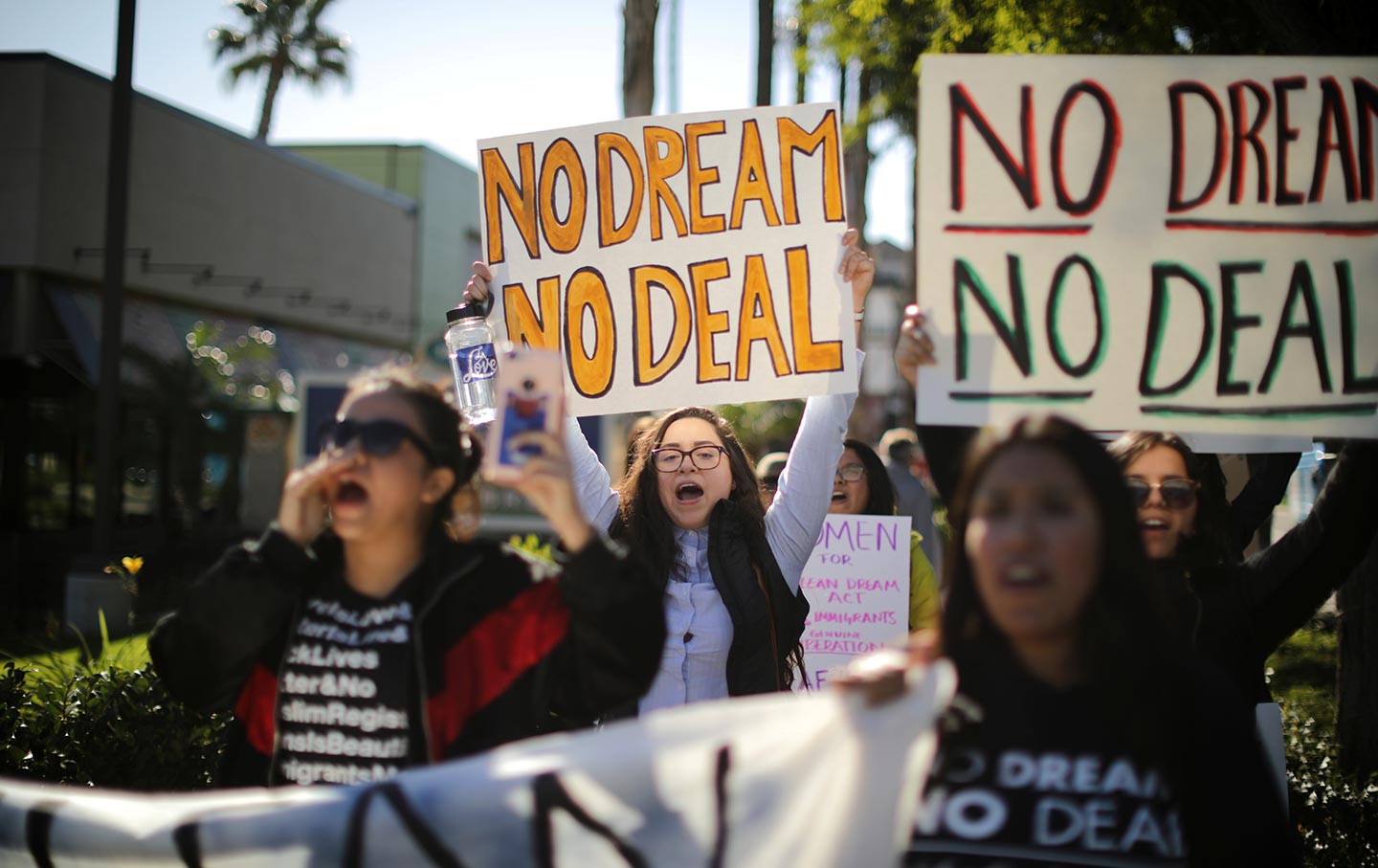 On Monday night, Reyna Montoya was back in her home state of Arizona. The 26-year-old immigrant-rights activist, whose DACA status expires in October, had spent much of fall and the new year shuttling back and forth from Phoenix to Washington, DC, to lobby for a deal for 700,000 other young immigrants like herself. She’d been in DC every day that Congress had been in session since November 27.

After the announcement that Democrats had agreed to a shutdown deal that would fund six years of funding for the Child Health Insurance Program but postpone any agreement on immigration, Montoya expressed frustration: “It’s disappointing to see that minority leader Schumer would believe McConnell. We’ve been here before.”

Montoya pointed to just last month, when McConnell promised Senator Jeff Flake (R-AZ) that he’d bring a vote on immigration to the table come January: “And now we’re extending till February? I’m definitely feeling anger. Democrats are not good at negotiating, and the fact is, right now they’re walking away with nothing.”

Indeed, Democrats agreed to support a stopgap spending bill that will fund the government through February 8 after receiving a promise from McConnell similar to one he made to Flake. In a statement delivered on the Senate floor, McConnell said he had the “intention” to raise the issue of how to provide undocumented young people long-term protection after President Donald Trump revoked DACA, or Deferred Action for Childhood Arrivals, last fall.

But these sorts of promises are flimsy, especially against the historical record. For all the bipartisan support that the federal Dream Act has enjoyed in its 17-year history, Republicans—and, it should be noted, a number of Democrats—have repeatedly quashed the bill. The Dream Act would grant some undocumented young people who’ve lived in the United States for years and cleared a host of hurdles an opportunity to qualify for citizenship. The closest the standalone bill came to passage was in late 2010, when, after passing through the House, it failed to clear a cloture vote in the Senate by just five votes.

A DACA Deal Is in the Works, With or Without Trump

In the Age of Trump, Tania Unzueta Is Holding Democrats to Account

President Barack Obama announced DACA in 2012, after comprehensive immigration reform stalled. (While many people refer to DACA young people as Dreamers, those who receive DACA protections constitute a smaller subset of those who would qualify for the Dream Act.) Then, in 2013, a version of the Dream Act was tucked into the comprehensive immigration-reform bill that cleared the Senate but died in the House.

Since then, the Republican Party has been taken over by hardline immigration restrictionists, and Trump himself became president by calling for a border wall. Last week Representative Bob Goodlatte (R-VA) and senators Tom Cotton (R-AR) and David Perdue (R-GA), who advocate for harsh penalties for undocumented immigrants and a drastic cut to even legal immigration, helped quash any hope of a DACA deal that didn’t also include stiffer immigration enforcement.

That record speaks louder than McConnell’s “intentions,” and others in the immigrant-rights world were similarly angered.

“We’re so disappointed and outraged to be honest with you,” Angelica Salas, executive director of the Coalition for Humane Immigrant Rights of Los Angeles (CHIRLA), one of the largest immigrant-rights organizations in California, told The Nation. “What happened is, once again Republicans demonstrated their absolute disregard for us. And on the Democratic side, it’s so disappointing to see their leadership cower under this pressure over and over again.”

On January 8, a federal judge barred the White House from blocking the administration of DACA while a legal case winds its way through the courts. Under Judge William Alsup’s order, the federal government must process DACA-renewal applications. Last week Republicans raised this point to rationalize delaying a vote on DACA for longer.

But enrollment in the program is individual and the two-year protections expire on an individual basis. Every day, an estimated 122 DACA young people lose their status, and an estimated 14,000 have lost their DACA protections since Trump cancelled the program in September. With the reopening of the DACA application period, Salas said CHIRLA had been scrambling to provide young people with legal assistance to file their applications.

This past weekend CHIRLA held a single clinic, and helped process more than 90 applications in two days, Salas said. But every day that passes without a DACA deal puts more and more young people at risk. Last week, Attorney General Jeff Sessions announced that the Department of Justice would respond to the Alsup’s order by appealing directly to the Supreme Court. “We see this as a very short window,” Salas said.

Montoya remains undeterred. But even she is watching the calendar closely. Her DACA protections run out on October 12. While there is a renewal window open, Montoya can’t reapply until 180 days before her expiration date. “Then if Congress doesn’t act and the ruling gets overturned, I could be out of options really quickly.”

But she sounded fired up about the next few weeks. “We had people from 14 different states, all conservative states, going to visit every single office throughout our time in DC,” Montoya said. She founded the Phoenix-based immigrant-rights group Aliento and led the campaign Vote 4 Dream to gather between 10 to 30 people every week to knock on doors of member of Congress for the last two months. Montoya said her group managed to speak to 95 senators to make their case for a DACA deal.

For her part, she said she’ll be back in DC this Thursday, and plans to stay as long as she can to help convince Congress to come to an agreement about her life.