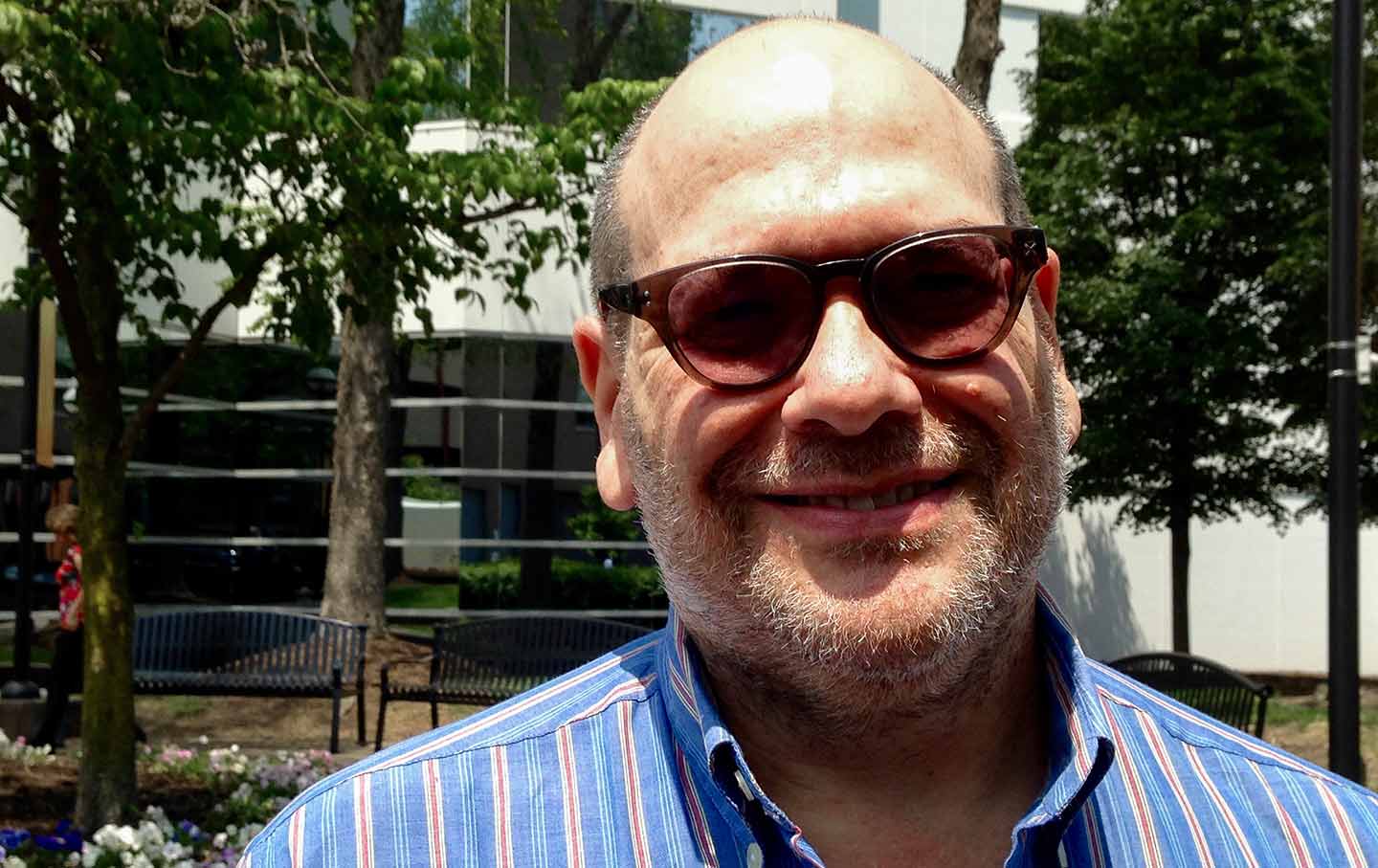 A photo of Daniel Ralph Heyman, who was arrested while attempting to ask questions to Health and Human Services Secretary Tom Price, Wednesday, May 10, 2017. (AP Photo / John Raby)

Health and Human Services Secretary Tom Price has struggled to explain the legislative monstrosity that Donald Trump and Paul Ryan claim is an “American Health Care Act.” It’s actually an “American Take-Away Health Care Act,” which may explain why Price’s apologias for the assault on ailing Americans so frequently provoke laughter.

But no one was laughing in West Virginia—a state whose voters backed Price’s boss, Donald Trump, but which will suffer mightily if the AHCA is actually enacted. Price swept in on what political careerists refer to as a “listening tour.” In fact, it was a photo opportunity designed to convince West Virginians that Price, a millionaire physician who went into politics to represent millionaire physicians, cares about them. That’s an “alternative fact” if ever there was one. So it was appropriate that White House Counselor Kellyanne Conway, the progenitor of the communications fantasy that goes by that name, traveled with Price on the visit to the West Virginia state Capitol in Charleston.

Conway’s presence was a signal that this trip was all about spin, not listening. And certainly not providing honest answers to sincere questions.

But someone forgot to tell Dan Heyman, a veteran reporter who works with the scrappy Public News Service project that seeks to keep reporting alive in state capitols around the country. Developed to fill the void created by declining newspaper, radio, and television coverage of public-policy issues, the Public News Service is an essential journalist voice in states across the country—providing coverage of issues that would otherwise be neglected.

ACLU: “Arresting a Reporter for Asking Questions Is an Unacceptable Assault on the First Amendment.”

Heyman was doing his job Tuesday, when Price came to the Capitol. As the most regal of Trump’s appointees was sauntering down a hallway, the working journalist started asking questions. Price did not answer. Heyman persisted. Price did not answer. Heyman held out the phone on which he records interviews and asked a very good question about whether victims of domestic violence would be protected under the AHCA.

Then, as Heyman recounts, “they decided I was too persistent in trying to ask this question and do my job, so they arrested me.”

The reporter was detained by Capitol Police, handcuffed, and charged with “willful disruption of governmental processes.” A criminal complaint claimed the reporter “aggressively breach[ed] the Secret Service agents to the point where the agents were forced to remove him a couple of times from the area.” It also said he was “causing a disturbance by yelling questions.”

A couple of points here:

“The arrest of a journalist trying to ask a question in the public interest is a clear affront to press freedom.”

First, competent Secret Service agents work all the time with journalists who pose questions to politicians who are on the move. All. The. Time. If attempting to get close to a politician to ask a question is criminalized, then a journalistic practice that is as old as the First Amendment to the Constitution of the United States is finished. As Alexandra Ellerbeck of the Committee to Protect Journalists explains: “The arrest of a journalist trying to ask a question in the public interest is a clear affront to press freedom.”

Second, yelling questions to elected and appointed officials who are attempting to avoid answering them is what journalists are supposed to do. If that disturbs precious politicians like Tom Price, then the process imagined by the founders when they established a robust freedom of the press is working. Unresponsive politicians must face persistent questioning—from citizens at town-hall meetings and from reporters in hallways of the West Virginia state Capitol.

If this basic premise of the American experiment is undermined by Donald Trump’s “enemy of the people” attacks on a free press, and by the arrest of anyone who disturb the manicured men who imagine they can implement even the president’s most unpopular policies without the slightest disturbance, it is not just journalism that is threatened. It is democracy.

“What happened in West Virginia didn’t happen in a vacuum. The president has been attempting to undermine the press on a regular basis and resists transparency at every turn. He has smeared the media as ‘the enemy of the people.’ On the campaign trail, he revoked the credentials of some of the most prestigious news outlets in the country because he didn’t like their coverage. Reporters have been the victims of physical violence and the target of mockery. Others have been arrested and charged with felonies for covering protests,” observed the American Civil Liberties Union of West Virginia, which has defended Dan Heyman’s right to report. “Against this backdrop, it should come as no surprise that a reporter was arrested for trying to ask a question to a member of Trump’s cabinet. But it can never be accepted as normal.”

The ACLU is right: “Arresting a Reporter for Asking Questions Is an Unacceptable Assault on the First Amendment.”