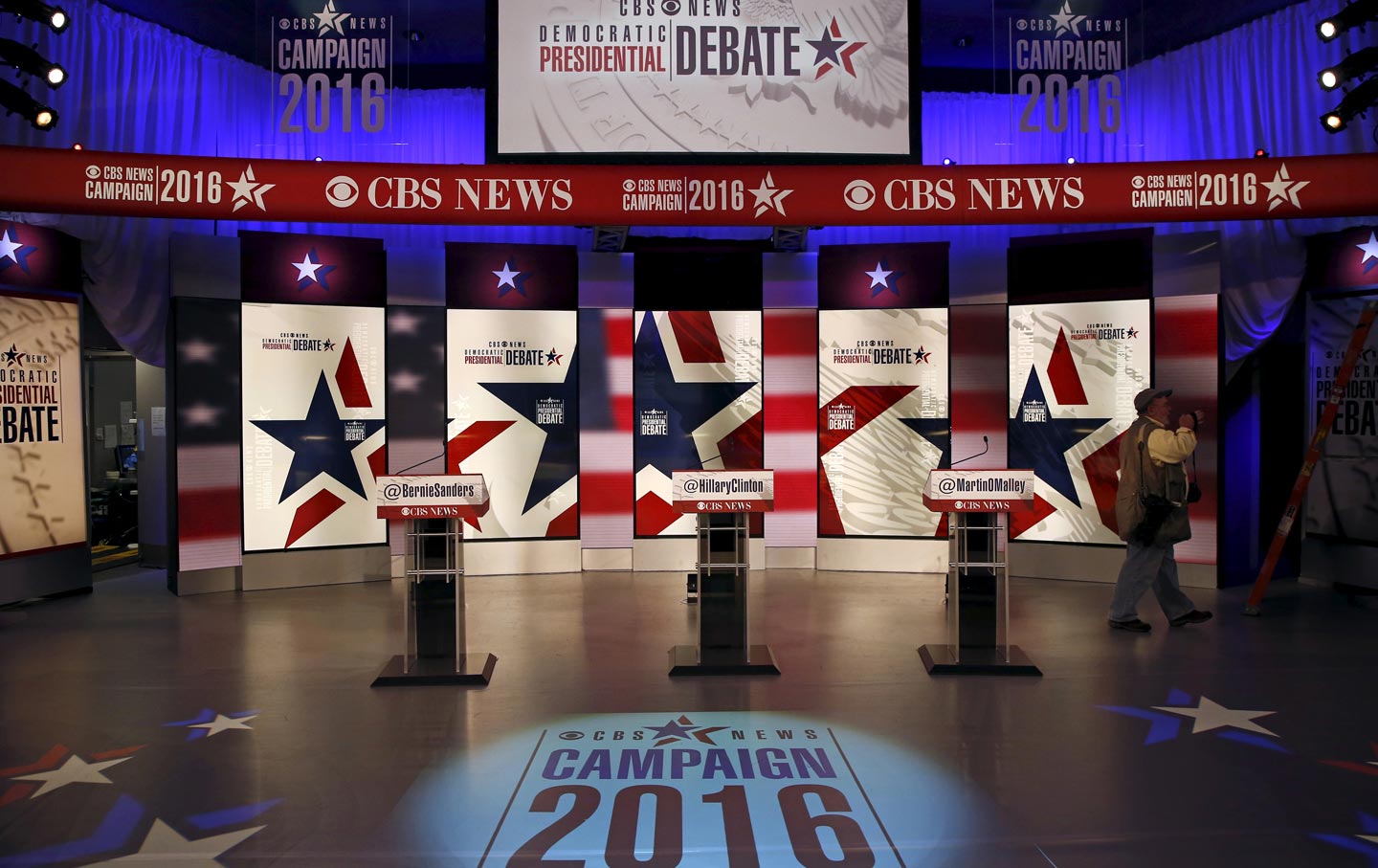 The stage for the debate for the 2016 US Democratic presidential candidates at Drake University in Des Moines, Iowa, United States, November 14, 2015. (Reuters / Jim Young)

Des Moines—It will be a more sober and serious Democratic presidential debate that plays out tonight in the capital city of this first-caucus state. The horrific violence that has left more than 125 dead, and that French President François Hollande on Saturday characterized as “an act of war that was committed by a terrorist army, a jihadist army,” will necessarily alter the focus and tenor of the discourse.

Yet CBS News, the Democratic National Committee, and the three remaining contenders for the Democratic presidential nomination have, of course, made the right decision to go ahead with what will be only the second of the party’s debates.

“American leadership is put to the test” by shocking, horrifying events that occur at unexpected moments, explained CBS News executive editor and Evening News executive producer Steve Capus. “The entire world is looking to the White House. These people are vying to take over this office.”

“This is exactly what the president is going to have to face,” Capus told The New York Times.

“This is exactly what the president is going to have to face." -- Steve Capus of CBS

It is not just leadership that is put to the test. The democratic process by which American leadership is chosen is always being tested.

The American democratic process is complex and cumbersome; it has flaws and faces challenges. Yet, it also has great strengths, and one of them is a tradition of carrying on in the face of adversity. Americans have waged campaigns and held elections in the most difficult and demanding of times. The elections of 1812 and 1814, of 1862 and 1864, were held in times of war at home. Elections were held during World War I, World War II, the Korean War, the Vietnam War, and the Iraq War, during the Cold War and in the immediate aftermath of the Cuban Missile Crisis.

In 1944, when he was asked about rumors that the presidential election would be postponed because of the complexities of carrying out the voting when the country was so fully engaged with the fight against fascism, Franklin Delano Roosevelt replied by asking the reporter how an American election campaign and vote could be cancelled. “Well, you see, you have come to the wrong place,” explained the president, who that fall would be reelected to a fourth term. Referring to those who spoke of postponing an election, FDR said, “All these people around town haven’t read the Constitution. I have.”

A debate is just one stop on a long campaign trail. And sincere commentators might argue that the debate in Des Moines could have been rescheduled—indeed, that it might have been fairer to the candidates and the discourse to move things around.

But DNC chair Debbie Wasserman Schultz made a good point when she said after the Paris attacks that there was “all the more reason to have a discussion” about issues of war and peace and homeland security. This is, in particular, a time for the candidates to discuss the balance that must be struck in seeking both to keep Americans safe and to maintain their freedom.

Wasserman Schultz is right that this debate will have “more of a focus on foreign policy and combating terrorism and national security than there might have been.”

That’s nothing wrong with that, especially if the candidates are pressed to get beyond talking points and to explore the complexities of those questions. Focused debates that explore issues of the moment are appropriate, and instructive.

Nor would there be anything wrong with expanding the debate schedule to provide opportunities to further explore those issues—and to discuss the issues that might not be touched on tonight. Just as a determination to face issues in the moment is a strength of the American democratic process, so, too, is a willingness to open up and expand that process.