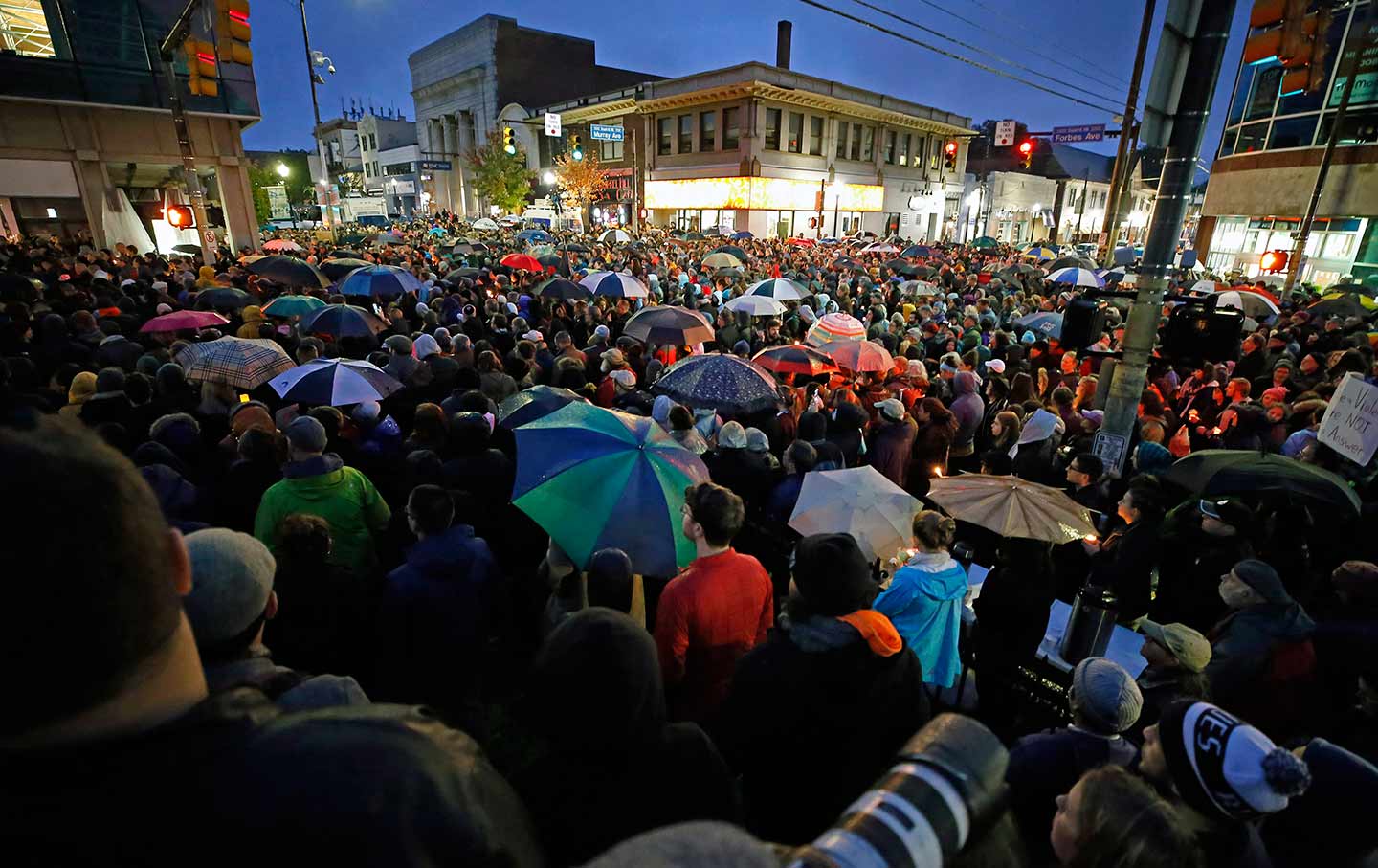 Thousands of people gathered at the intersection of Murray Avenue and Forbes Avenue in the Squirrel Hill section of Pittsburgh, for a memorial service for the victims of the shooting at the Tree of Life Synagogue where a shooter opened fire, killing 11 people, October 27, 2018. (AP Photo / Gene J. Puskar)

When my grandfather told me stories of the Holocaust, it was never with the message of “It could never—it must never—happen here.” Instead, with the craggy grimace of a scarred cynic, his message was, “It will happen here.” In his mind, a “war on the Jews” was not a relic from the past but a historical inevitability. He cared little for other communities in harm’s way. His view of the world was tribal—you watched the world from your bunker and, at most, you shuddered.

I found myself wondering today what my grandfather would make of this moment, now that Jews have seen their blood spilled because there is a sector of this country that has been driven to violence by racism, white suprematism, and conspiracy theories legitimatized by a cable news network and their bigoted carnival barker of a president. We have before us a fascist movement, an armed backlash aimed at black and brown people, Jews, Muslims, women, the LGTBQ community, the media, and also aimed at the left. It’s still small. It still can be defeated. But in our militarized, armed-to-the-teeth society, it doesn’t take masses of hate merchants to terrify the majority, to send us into our homes and praying, in futile fashion, that our votes alone will be enough to turn back this tide.

You don’t need to be a fortune teller to anticipate what might come next: violence at polling stations, death at the Mexican border, and more lone bombers who see Trump as the big man who makes them feel less small. In one week, two black people, 69-year-old Maurice Stallard and 67-year-old Vickie Jones, were killed in a racist attack at a Kroger in Kentucky; the Tree of Life Synagogue was massacred; bombs were sent to the targets of Trump’s hateful rhetoric. More violence is being promised against the “caravan” of immigrants seeking asylum at our border. And this administration has attacked the trans community because of a desire for votes and an instinct for cruelty. This isn’t a war on any individual group. They are attacking all of us in a manner meant to make us feel as atomized and fearful as the white-knuckled Fox News viewer, searching for demons under our beds.

My grandfather rejected concepts like militant solidarity, but now there is simply no other alternative. I’m not talking about vigils and calls for understanding by candlelight, as comforting and valuable as it can be to get out of our homes and into the streets. We need loud rallies against racism. We need speak-outs for immigrants. We need to say that trans rights are human rights. We need public meetings about what fascism is and how to fight it. We need to provide security and ensure safe spaces for groups that are attempting to come together. We need with masses of numbers to physically confront these fascists when they come to our towns. I’m not talking about us having our own small bands of street fighters against their brass-knuckled Civil War re-enactors, but masses of us occupying their spaces and preventing them from gathering, organizing, and, to put it bluntly, killing.

My grandfather was both right and wrong. He was right when he told me that in the future, this country was going to be a dystopic place with people at each other’s throats: a place where fascism, racism, and anti-Semitism would find easy root. He was wrong, however, to say that the only alternative is to hunker down, huddle with your tribe, and hope for a savior either here on earth or from the heavens. The answer lies in our organizing in precisely the opposite manner. It is not the case that “your community could be next.” Next has already arrived. Every community is already under attack. The president is a fascist horticulturalist, planting the seeds of violence across the country. He must be stopped. His shock troops must be stopped.

We, at least for now, are many and they are few, but that dynamic will not last. I have never been more convinced that solidarity is the only way to win, because I don’t see another alternative, other than losing. And if we lose, we lose everything.