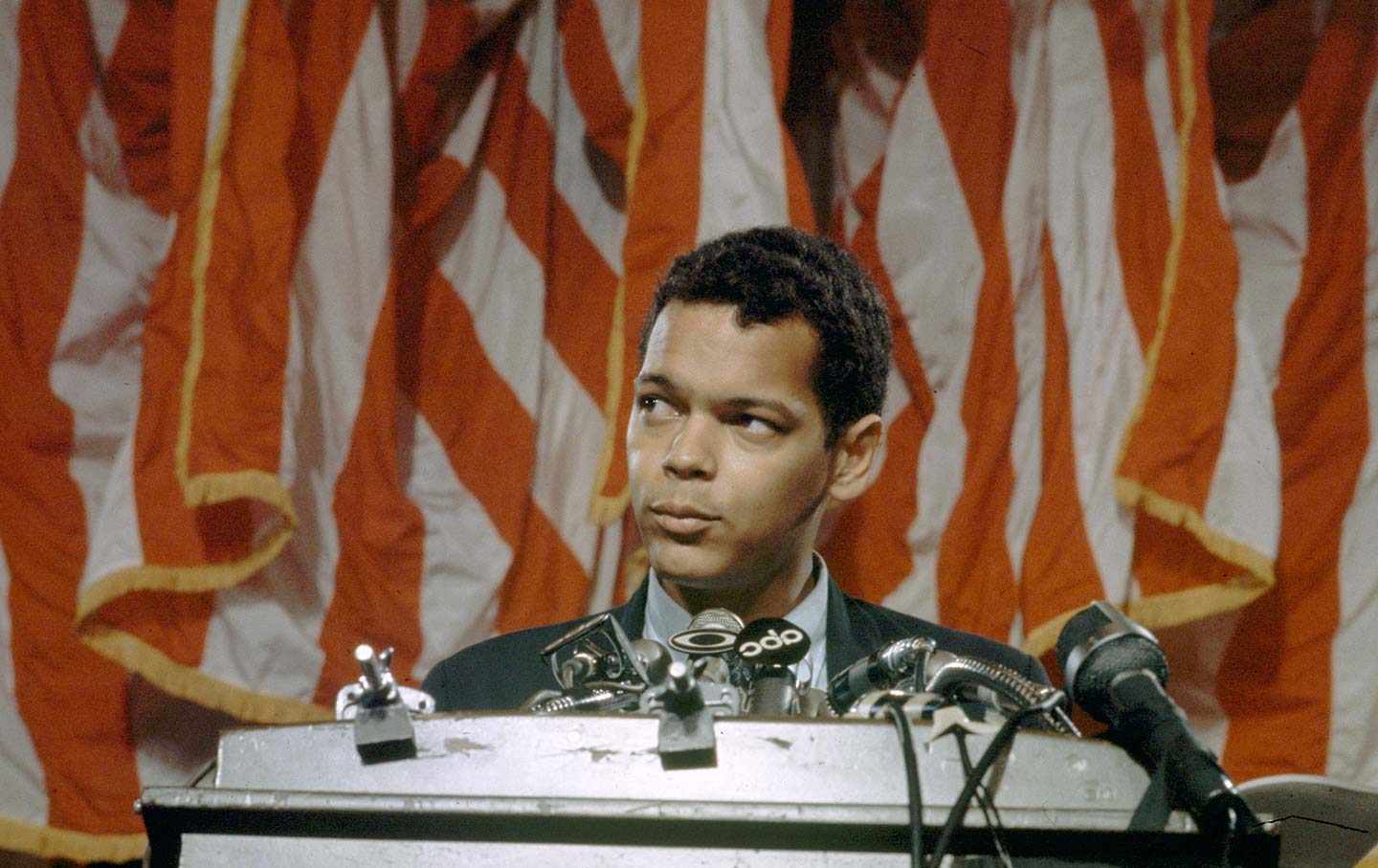 Julian Bond during his time in the Georgia House of Representatives in 1968. (AP)

At the 1968 Democratic National Convention, after suffering too many setbacks in their drive to bring the ideals of the civil-rights and anti-war movements into their party, the most determined delegates decided to make one last stand for a new politics. They tried to nominate for the vice presidency of the United States a 28-year-old Georgia state legislator who had already battled and beaten the segregationists and the militarists.

Julian Bond, a co-founder of the Student Nonviolent Coordinating Committee (SNCC) who had marched with the Rev. Martin Luther King Jr. (and who would go on to chair the board of the National Association for the Advancement of Colored People and serve as president of the Southern Poverty Law Center), had fought his way onto the floor of the most contentious convention in the party’s history. And in the waning hours of the tumultuous August 26-29 convention, he was at the center of an exquisite (if all too brief) uprising against the old politics.

Elected to the Georgia state legislature shortly after the Voting Rights Act of 1965 was enacted, Bond was denied his seat by the segregationist Democrats who controlled the statehouse. The stated reason for rejecting the will of the voters was Bond’s embrace of SNCC’s opposition to the war in Vietnam, as well as his support for protests against the draft. Bond’s battle earned national headlines in 1966, when a 9-0 US Supreme Court majority ordered that he be seated.

That long fight identified Bond in the minds of student activists, civil-rights advocates, and anti-war campaigners nationwide as a Democrat who was willing to fight party elders and even President Lyndon Johnson on matters of principle. Bond’s stature rose in 1968, when he helped to lead a challenge to the seating of the Georgia delegation to the Democratic National Convention, which was controlled by segregationist Governor Lester Maddox and his allies. Eventually, Bond and the “Loyal National Democrats” who challenged the segregationists were allowed to take seats on the convention floor—in one of the critical turning points of the convention and the long fight to open up the party.

But victories were few for the activists who had come to the convention as delegates supporting the liberal candidacies of Eugene McCarthy and George McGovern (who had stepped in as a candidate after the assassination of Bobby Kennedy). As Chicago authorities attacked student demonstrations outside the convention hall, the delegates inside the hall rejected an anti-war “peace plank” and then nominated Vice President Hubert Humphrey for the presidency—rejecting McCarthy and McGovern (and the Rev. Channing Phillips, the first African-American to have his name placed in nomination for president at the convention of a major party).

Instead of seeking to balance the party ticket by selecting a running mate who was identified with the anti-war movement, Humphrey selected Edmund Muskie, an ideologically cautious senator from Maine. Many of the most committed anti-war delegates wanted to mount a challenge to Muskie’s nomination, but they needed a candidate. Bond agreed to have his name placed in nomination by the Wisconsin delegation, which included some of the most ardent supporters of McCarthy’s candidacy.

A Milwaukee lawyer who had been active in the civil-rights and anti-war movements, Ted Warshafsky, grabbed a microphone and declared: “I rise with a voice that has become hoarse in the exercise of democracy. I rise on behalf of the state of Wisconsin to offer a name in nomination.”

The convention erupted in loud applause as the chairman asked if the Wisconsinite wanted to speak from the podium or the convention floor.

“Mr. Chairman,” replied Warshafsky, “I appreciate your courtesy, but we of Wisconsin have stood with the people throughout this convention. We would just as soon be on the floor now.”

“Mr. Chairman,” he said, “we of Wisconsin as Democrats who are interested not only in what the party is but in what the party is to become if it will truly live up to the promise of the movie that we saw on that screen tonight [recalling Bobby Kennedy], if we will truly live up to the inspirational promise that Senators McCarthy and McGovern have given to this convention and this country, if it will truly make the American dream a reality not only for affluent delegates but for the young people who march in the parks looking for quality in life…”

“I could talk on for half an hour about the man that we are going to put in nomination,” continued Warshafsky. “But I think that our positions are eminently clear to this convention and the American people. So I will say as simply and as sincerely [as I can] on behalf of my delegation that we wish to offer in nomination the wave of the future. It may be a symbolic nomination tonight but it may not be symbolic four years hence. We offer in nomination with the greatest pleasure the name of Julian Bond.”

The convention erupted in cheers for Bond, as chaotic demonstrations ensued. Television reporters raced to find the young legislator from Georgia. CBS anchor Walter Cronkite recognized Dan Rather, who asked, “Mr. Bond, how old are you?”

“And how old does the vice president, legally, does he have to be by the constitution?” asked Rather. Bond replied: “35, I believe.”

Rather: “So it isn’t likely that you’re going to be a serious vice-president nominee.”

Bond: “No, no, this convention might mandate to Congress, or request that Congress change the age by election time and maybe I can make it.”

Rather: “You’re saying that tongue-in-cheek. Now, what’s at work here? Wisconsin has placed your name in nomination for what purpose?”

Bond: “Well, I would hope it’s because they think I would make a good vice president. I think it’s also to get an opportunity to address this body and—through the medium of television—other people in the nation about some of the issues that are not being discussed here.”

Bond: “Which are poverty, racism, war. There really has not been a great deal of free discussion about them I don’t think.”

Bond: “Well, it might be done through the nominating speeches. That would be the vehicle.”

Rather: “Would you give us a bit of your background? The name ‘Julian Bond’ do you think it’s a household word?”

Rather: “Do you plan to address the convention yourself?”

Bond: “Is that the procedure for a vice-presidential nominee?”

Rather: “Not normally, but this hasn’t been a normal convention.”

It was not to be. The effort to nominate Bond unraveled quickly because of the legislator’s age and because of the determination of party leaders to keep tight control of the process. (Muskie was nominated, though Bond finished second with 48.5 votes.)

Bond did not get to deliver the speech he proposed. The convention did not recognize, let alone live up to, the promise of the insurgent campaigns of 1968. Nor did the campaign that followed. The Democratic Party still wrestles with the issues of poverty and racism and war that animated the dissidents of 1968. It still struggles to live up to the promise that Ted Warshafsky and Julian Bond saw all those years ago.

But Bond, who died in 2015 at age 75 (three years after Warshafsky’s passing at age 85), remained an optimist—about the trajectory of his party and his country. In a 2008 speech on his work with Eugene McCarthy and the battles that played out at the 1968 convention, Bond spoke eloquently about how the unfinished business of his party and his country needed to be seen “in the context of the freedom struggle, whose history is a never-ending fight between right and wrong.”

As a lifelong activist who had won and lost great battles, Bond favored a line from historian Howard Zinn: “Not to believe in the possibility of dramatic change is to forget that things have changed, not enough, of course, but enough to show what is possible. We have been surprised before in history. We can be surprised again. Indeed, we can do the surprising.”

Fifty years ago, at a national party convention that produced a fair share of heartbreak and disappointment, a lawyer from Wisconsin and a legislator from Georgia did the surprising. They broke the rules and pushed the limits. They were bold and quick-witted and strong. And it was wonderful.