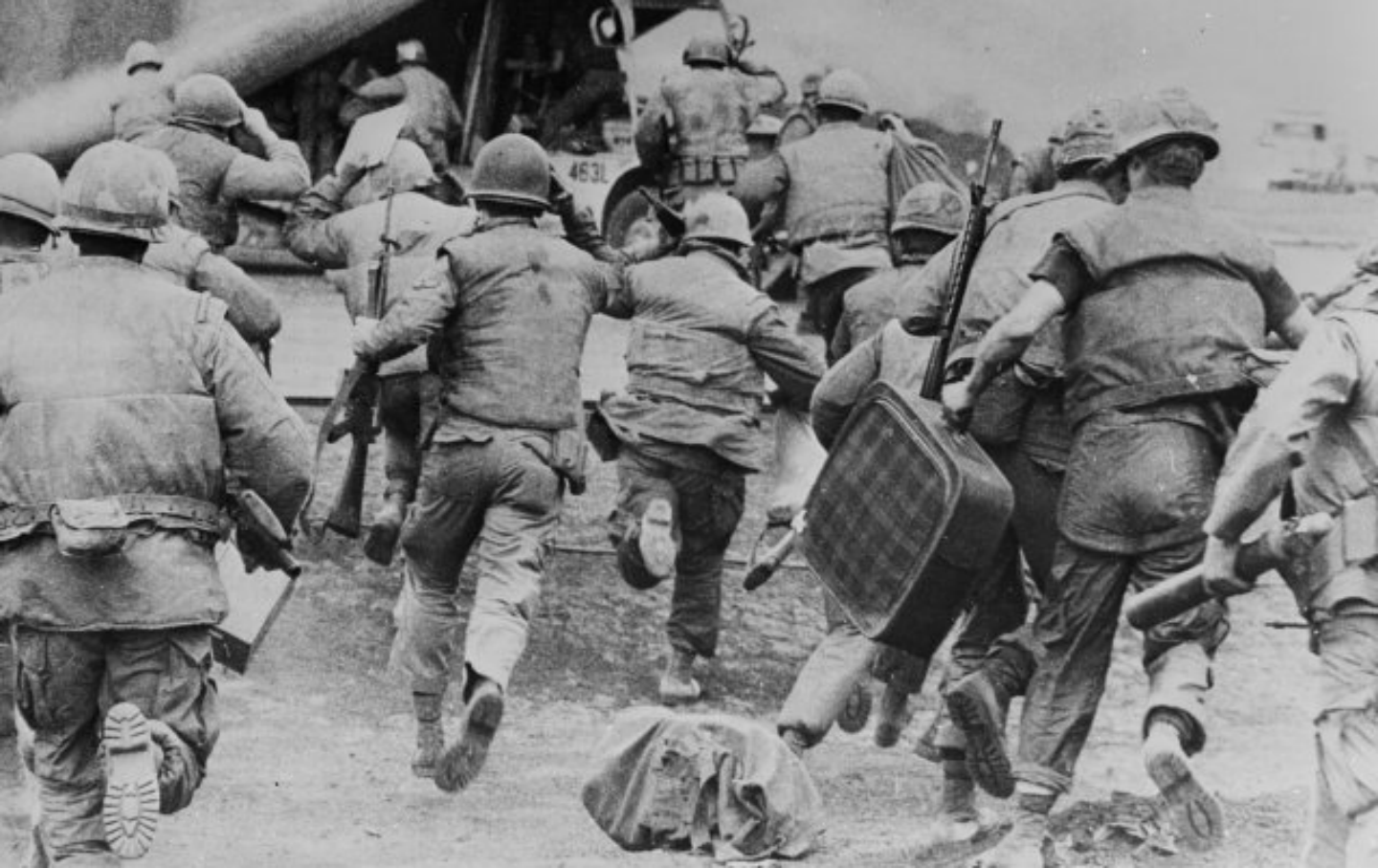 Even if not as deeply grooved in the national memory, April 30, 1975, the day of the final evacuation of the United States from Vietnam, is surely a date that lives in infamy at least as much as Franklin Roosevelt’s impassioned description of December 7, 1941, when the Japanese bombed Pearl Harbor. December 7 was only the date of an attack, one that was repulsed and repaid many times over during the next four years, ending in Hiroshima and Nagasaki. Similarly, September 11, 2001, saw an attack that has resulted in two American wars against Muslim countries, uncountable deaths, and an infernal creation of chaos in the Middle East.

April 30, 1975, was different. That was when the United States learned, for the first time in our two centuries of existence, what defeat tastes like. It is without doubt a regurgitative taste, yet it is a taste that was and is experienced differently depending on who you are. Perspective is all. But it is a taste that, unlike wine, has not only not improved but has become more rancid, even bitter, with age. It is clearer every year that 4/30/75 is foundational in a way that attack dates such as 12/7/41 and 9/11/01 are not. Defeat in Vietnam had very little effect on our international status, yet it changed the way we feel about ourselves.

Defeat had its uses in provoking a re-examination of war as an instrument of policy, a re-examination that could not have occurred following victory in World War II. After 4/30/75, we saw the limits of power, the failure of intervention, the strategic uselessness—not to mention barbaric cruelty—of invading and occupying and bombing a country most of whose people didn’t want us there. Vietnam, specifically our loss there, kept us out of major foreign interventions for a generation.

Nine-eleven was a hammer blow to our national head. Like many blows to the head, it caused a concussion, followed by amnesia. The result was that we went to war against two countries that had neither attacked us nor had designs on us or our resources. The war in Afghanistan has now surpassed the Vietnam War as the longest in our history. As for Iraq, we flew into war there, as we had in Vietnam, on the wings of lies.

You can draw a line from the Gulf of Tonkin Resolution in 1964, when President Johnson lied the country into escalating the Vietnam War, to the Senate’s 2002 warmaking permission to President Bush, inspired by his lie about Saddam Hussein’s nonexistent weapons of mass destruction. This lie, accompanied by others, led to the war in Iraq, a war currently looking as if it will never end. The war is fed, nourished, extended, renewed annually by ever larger Pentagon budgets. And by lies, deceptions, and hidden ball tricks that involve illegal renditions and bribes to foreign countries.

When I covered the war in Iraq for The Nation in 2003, one could almost hear a sigh across the Mesopotamian desert from the ghost of the philosopher George Santayana: those who cannot remember the past are condemned to repeat it.

In the quicksand of that desert, America sinks deeper every month.

Not all of us become trained killers like Chris Kyle, the author and hero and ultimately martyr of American Sniper, but we breed him, support him, and include him in our volunteer forces, our new foreign legion. They are patriots, these forces, not mercenaries, but most of them come from far enough down in the 99 percent that they have strictly limited aspirational prospects. This condition is nailed down by the stinginess of the 1 percent, who yearly cut aid to education and the arts while trying earnestly to put college economically out of reach for most high school students. A career in the military is the best security most of our volunteers can achieve. Their service will never provoke a forceful antiwar movement, because without a draft no one has to go who doesn’t want to. When we’ve bred enough Kyles we’ll be the Phoenix that arose from the ashes of defeat in Vietnam.

After April 30, 1975, all presidents knew to avoid conscription. When you have a draft you force people to go to war who don’t want to. Their parents and lovers also don’t want them to go. Here comes a peace movement, an antiwar campaign. What a shifty little lesson that was from Vietnam. Not no more wars, just no more drafts. This allows president after president to wage executive wars on any pretext. Our loss in Vietnam lives on. In the musical Hair a line summed up the meaning of conscription. “The draft is white people sending black people to make war on the yellow people to defend the land they stole from the red people.” What a joke.

A standing army, George Washington warned, “could not be done without great oppression of the people.” Quaint? Prescient? The Founders echoed the first president. James Madison, worrying about “the inequality of fortunes,” decided that “a standing military force, with an overgrown Executive will not long be safe companion to liberty…. No nation could preserve its freedom in the midst of continual warfare.”

As we send drones over the Middle East and Africa, as those voluntary boots go back on the ground in Iraq and we refuse to withdraw them from Afghanistan, it becomes clearer every month that the United States is no longer a country at war but has become instead a country of war.

In such circumstances, what are we to our enemies? What are we in the Muslim lands where we fight? How do they institutionalize us, dehumanize us, remove us from being the sons and daughters of mothers and fathers, making it easier to behead us? Infidels? Invaders? Occupiers? Crusaders? Neo-colonialists? Imperialists? And do we cop, at least politically, to any of those identities?

What are they to us? “Bad guy” is the term of art for all the people we want to kill now. Does it matter if the enemy is Iraqi, Syrian, Afghan, part of the Islamic Caliphate? Whoever the objectified “bad guy” is, he is no longer a fellow rider on our crowded planet any more than “gooks” or “dinks” were in the long war that ended on 4/30/75. He is merely a “bad guy,” more often than not a bearded “bad guy” so we can’t even see him properly. If he’s wearing a turban he’s just a “raghead.” It’s easy to kill him because he’s almost not even a “him” but an “it.” Sometimes we can even get “bad guys” to kill each other—Afghans against the Taliban, Sunnis against Shiites, both of them against ISIS. Beard versus beard. Try to figure out who’s on what side in Syria. The war of everyone against everyone.

In redeeming the defeat of 4/30/75, we cause these calamities only as side effects, the eventually intended and then uncontrollably bloated and toxic effects, of our starting wars against “bad guys” in the first place. And the last place.