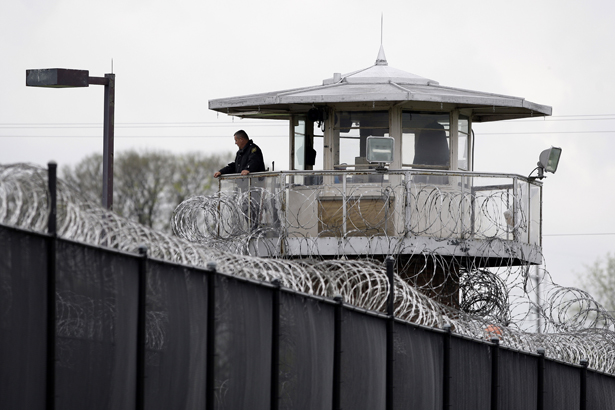 More than thirty years ago, Mohaman G. Koti shot a police officer during a parking ticket dispute in which no one was killed. He is now in his late 80s and suffers from asthma and a neuromuscular disorder. He doesn’t hear so well, either. Yet Koti, a well-known peacemaker behind prison walls, was denied parole every two years beginning in 2005 because New York State still considered him a risk to public safety. The state did this despite the fact that it costs, on average, twice as much to lock up a stooped grandfather with digestive problems as it does to hold a healthy young man—and can sometimes cost as much as five times more. It was only last month, after many denials, that Koti was finally granted parole. He will re-enter the population just a few years shy of his ninetieth birthday.

Gloria Rubero, 64, was lucky enough to avoid this fate. She got released from prison before she became so old and infirm that her story took on the absurdist warp of Koti’s case. But she quickly found that life on the outside as an aging ex-inmate had its own challenges. When she was sentenced to twenty-to-life for murder and robbery, we still called the Internet ARPANET; there were no smartphones or digital cameras, and CDs were considered cutting edge. Twenty-six years later she was released into an unfamiliar, wireless world. She had no driver’s license, no birth certificate, no idea how to use a subway card, and the people who might once have helped her navigate these novelties—friends and neighbors—had disappeared. In the lonely chaos of the free world, she often found herself longing for the security of prison.

“People thought I was crazy,” said Rubero, who had spent almost half her life behind bars by the time she was released. “But inside I had a job. I got my education there, I knew a lot of people. I didn’t have to think about rent, electric bills, credit.”

These are just two stories from the front lines of the emerging crisis of America’s aging prison population. All across the United States, prison populations are graying, growing old and infirm behind bars. Between 1995 and 2010, the number of people in prison who are older than 55 quadrupled, and the numbers keep increasing. Today, nearly 16 percent of this country’s 2-plus million prisoners are over the age of 50, or “elderly,” as defined by the National Institute of Corrections. By 2030, a third of all inmates will be elderly—and many prisons may look a lot like nursing homes.

This is not because old people are suddenly becoming violent, turning to lives of crime in their retirement years. This is a man-made crisis that tracks back to the nation’s long obsession with retribution, which peaked in the 1980s and 1990s. That’s when the “tough on crime” and “war on drugs” ideologies reigned supreme, spawning mandatory minimum sentences and “three strikes” laws, among other things. Now, several decades later, people sentenced during this wave of aggressive incarceration are hitting their 50s and 60s—and the full meaning of “twenty-five-to-life” is becoming clear.

“The sheer number and the specialized needs of the aging prison population have begun to surpass correctional facilities’ capability to provide effective and humane care,” the Osborne Association and Florence V. Burden Foundation warn in a recent report titled “The High Costs of Low Risk.” “This sustained mass incarceration of elders bears major economic, social, ethical, and health implications—and without decisive action, our criminal justice system is at serious risk of collapsing under its own weight.”

The Osborne Association and Burden Foundation have recently joined forces to try to sound the alarm about the aging inmate explosion. Their focus is New York State but their message is national: we can no longer afford to ignore the human and financial costs of keeping America’s seniors in prison.

At its most basic, hard time is profoundly hard on the body. Incarceration makes existing medical issues worse and increases the risk of developing new ones. It leads to a process of “accelerated aging”—which is a gentle way of saying that inmates’ physiological age begins to outpace their chronological age, sometimes by as much as ten to fifteen years, such that 50-year-olds seem more like 60- and 65-year olds, and 70-year-olds seem as old as 85.

Adding insult to the injury of accelerated aging is the daily business of being old behind bars. Incontinence, medication routines, dementia, the need for wheelchairs and walkers—these are unpleasant under the happiest of circumstances, but they can be gruesome in prison. That’s partly because healthcare, while guaranteed in prison, tends to be of poor and limited quality, with few experts in geriatric medicine. But it’s also because inmates aren’t the only ones aging. Some US prisons are older than their oldest prisoners. They were never intended to function like geriatric care facilities. Narrow hallways, bunk beds and endless stairs can be difficult to navigate even for aging inmates who are ambulatory.

Aside from the physical costs aging offenders sustain, they also cost the system the most to incarcerate. Spending on inmates ages 50 and older tops $16 billion annually, according to the Osborne Association’s research. The average cost to house a geriatric prisoner runs about $68,000 a year, compared to some $34,000 for a younger, healthier inmate. This is true even though older inmates pose the least threat to the public safety. Indeed, elderly prisoners are some of the best educated and most rehabilitated in the system, and those who have served their minimum sentence (or more) are also the least likely to commit another crime after their initial conviction. Only four percent of those over age 65 will return for a new conviction, according to the Osborne-Burden report.

Consider the case of Mohaman Koti. He sidestepped the drug and violence routine while incarcerated and gained a reputation as a peacemaker. But he will be an old man when he gets his first chance to make good on his transformation outside prison walls. Koti’s story is typical of a system where punishment is often less about public safety than socially accepted revenge.

There are a few possible solutions, ways to reform the system that will ease the physical, medical and economic stresses, and both the Osborne Association and Burden Foundation get at some of these in “The High Costs of Low Risk.” One clear start? Prisons can begin identifying the elderly incarcerated as a sub-group with its own needs—like the subgroups that already exist for inmates with cancer, AIDS or heart conditions. Prison workers need to be versed in techniques of geriatric care, medications and mental health, and one of the best ways to do that is to make the care of older inmates a well-defined focus. The report also recommends retrofitting existing facilities or building new ones to accommodate elderly prisoners.

Compassionate release and parole for medical reasons are other necessary options. Laws calling for both have been on the books in many states for years, but they are widely unused. In a system in which as many as 40 percent of elderly prisoners suffer from cognitive impairment, according to a study cited by the Osborne Association, it is time to make the process of freeing an inmate with Alzheimer’s less onerous. Some inmates don’t even understand why they’re behind bars.

Such reforms would offer some relief, both to aging inmates and the bloated prison system that holds them. But they also raise a troubling question of their own. What happens to aging, and sometimes infirm, inmates once they are free? Although older inmates struggle inside prison, re-entering the community can pose comparable challenges, chiefly in securing medical care, housing and a basic income. Nursing homes and assisted-living facilities may seem like a reasonable next step for elderly former inmates, but many of them will not accept individuals with criminal records. Moreover, those who have been in prison since early adulthood have rarely paid into the Social Security system long enough to be eligible for benefits, leaving them with little means of support. And those who qualify for Medicare, which can be helpful in covering long-term care, often cannot access its coverage because they are on parole.

Fortunately, there are solutions here as well. Re-entry plans that focus on ex-inmate housing and reducing the time between release and Medicaid eligibility might be more effective; so too might programs, already cropping up in a few states and cities, that are expressly designed to help elders with re-entry. The Senior Ex-Offender Program in San Francisco, for example, is the nation’s first re-entry program exclusively for the aging. In New York, Montefiore Medical Center’s Transitions Clinic provides medical and mental health services to the recently released.

Yet Gaynes is also among the first to acknowledge that these reforms will only push us so far down the path of tackling the aging inmate boom. While a more humane prison system may be on the way, our first order of business is a philosophical one: creating a more just criminal justice system. We as Americans need to change the way we think about punishment.

Life sentences do not encourage true rehabilitation, and they may not be the best society can do for victims of crime, either. Perpetrators and victims—and the public at large—could benefit from a system that recognizes retribution must be paired with earlier release and more support for re-entry, as well as repealing mandatory minimum sentencing laws and refocusing our energies on diversion, community supervision and community-based sanctions and services. Attitudes about how best to hold people responsible for their crimes need to evolve. Otherwise, prisons of the future will become more and more like assisted-living compounds, and the people who leave them will be more and more like twenty-first-century orphans.