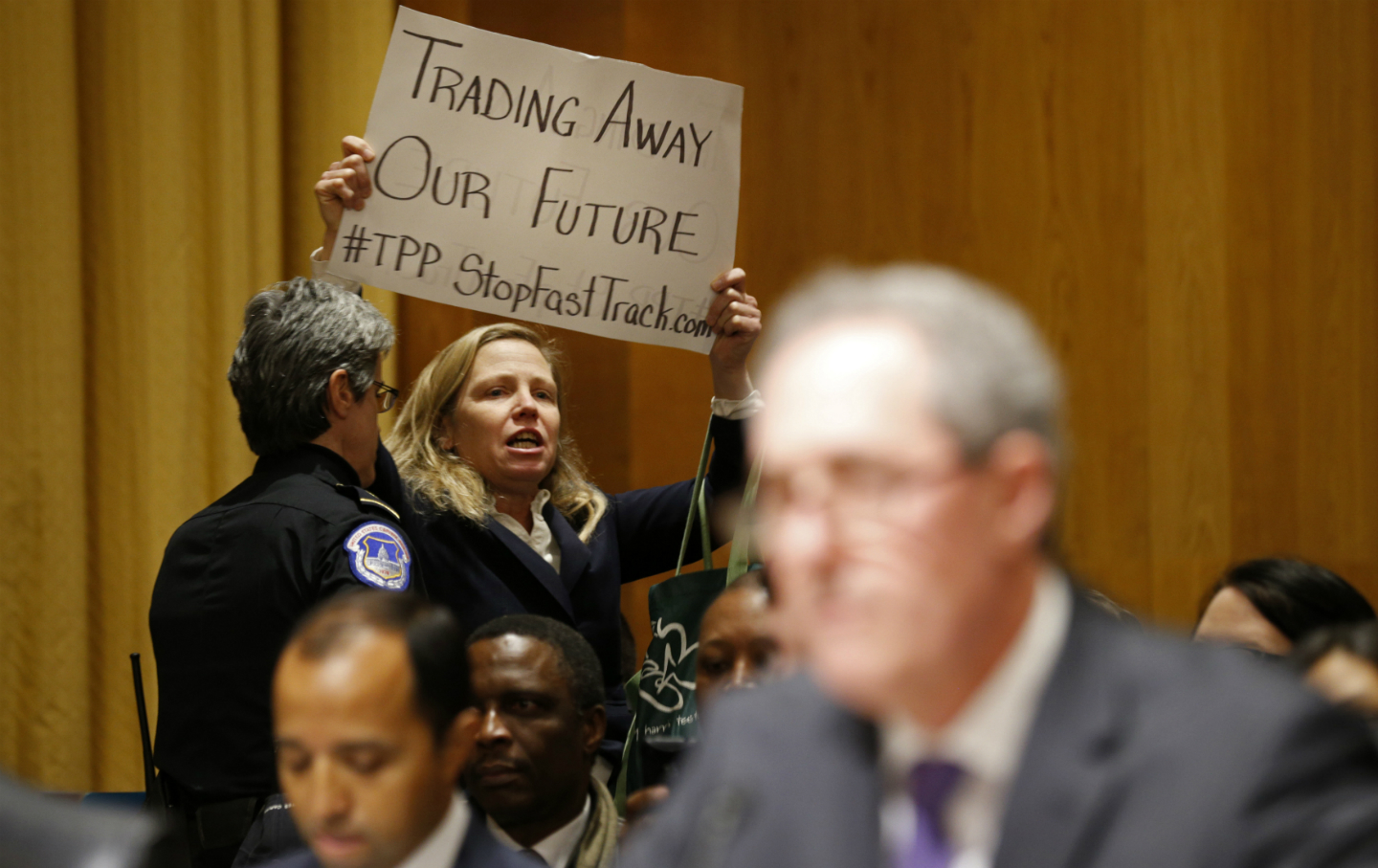 There are a lot of reasons Americans, even Americans who are generally supportive of President Obama, don’t want Congress to grant him Trade Promotion Authority to “fast-track” negotiations and the approval process for a sweeping new Trans-Pacific Partnership agreement. For instance, the president wants Congress to surrender its ability to make amendments to this deal and to agreements negotiated by the next president—even amendments that seek to lock in protections for labor rights, human rights, and the environment. The administration wants Congress to give up its power to hold a meaningful debate before voting on this and future deals. Yet, even as it seeks fast-track authority, the administration refuses to share the details of the agreement as it now stands with Congress.

But Congress does not have to grant it.

The Senate has, after a good deal of wrangling, bent to the White House’s fast-track demand. But the House, where trade debates are always more intense, could still say “no.”

Revelations about what’s being proposed in global-trade negotiations point to why this is the wrong time for Congress to surrender oversight authority.

Just this week, Wikileaks released previously-secret negotiating texts that point to how a proposed Trade-in-Services Agreement (TISA) that could clear the way for privatization of public services and deregulation of financial services. “Once again Wikileaks reveals what we cannot learn from our own government, a government that defaults to giant trade deals that affect generations of Americans shrouded in secrecy until they are virtually adopted,” says Communications Worers of America president Larry Cohen. "This TISA text again favors privatization over public services, limits governmental action on issues ranging from safety to the environment using trade as a smokescreen to limit citizen rights.  Those in the US Congress considering Fast Track should take heed.  TISA is as big a blow to our rights and freedom as the Trans- Pacific Partnership and in both cases our government’s secrecy is the key enabler."

The level of grassroots opposition to the fast-track proposal was evident Wednesday, when critics of failed trade policies released petitions with the signatures of roughly 2 million Americans who are asking Congress reject Trade Promotion Authority that would allow not just President Obama but the next president—be she a Democrat or a Republican—to fast-track new trade agreements without adequate scrutiny.

The coalition that is opposing fast track has grown to include all of organized labor, major environmental groups, family-farm organizations, human-rights activists, and civil-rights activists. There is much focus now on the transparency concerns that have been raised by the Wikileaks revelations and by the refusal of the administration to release the negotiating texts. As the Rev. William Barber II, the president of the North Carolina NAACP and a key organizer of the Moral Mondays movement, says to the free-trade advocates: “If the deal is as good as you say it is, show us the details.”

But underpinning the transparency issue is a deeper concern about the failure of past trade agreements to meet the promises that were made when they were negotiated and advanced under previous fast-track arrangements.

“The TPP reminds us of the North American and the Central American Free Trade Agreements," recalls Rev. Barber, who explains that: “Global trade issues may seem far-removed from our daily struggles. In North Carolina, however, we know that we lost tens of thousands of jobs because of past trade deals that were fast tracked through Congress. Congress will soon take up ‘fast track’ authority for the huge Trans-Pacific Partnership (TPP) trade deal. We say, Slow down. What’s the fine print? We have learned that when these trade deals get rushed through, working people get the short end of the stick.”

Barber points to issues that need to be addressed by Congress, and millions of Americans are now telling the House—which is preparing to take up the fast-track demand—to slow things down and get this one right. The trade debate has moved beyond the Beltway to where Americans live, because Americans feel the pain when trade debates are shut down and trade agreements fail working families. As Barber notes:

Most of the victims of these deals have been poor, minorities, and other members of what used to be called the ‘working class.’ Despite sweet reassurances to the contrary, NAFTA and CAFTA threw thousands of N.C. textile workers out of work in the 1990s. When China joined the World Trade Organization in 2001, additional manufacturing jobs fled—a trend that hit communities of color particularly hard in our state and beyond. The question of good jobs in minority communities is directly tied to the loss of these jobs overseas. Many have not ever been replaced. Many other jobs (that are) available are only at minimum wage.

NAFTA and CAFTA sucked tens of thousands of good jobs out of North Carolina and the south. At the same time, our Mexican and Central American friends tell us they were forced to move to the U.S. to feed their families because the low wages being paid by the runaway textile factories are not enough to live on. Wait until the TPP redirects textile and other manufacturing plants in Latin America to Asia. This will send more desperate parents across the Rio Grande, searching for jobs that pay enough to raise a family. While we join with our sisters and brothers from the south in our common fight for justice, human rights, and family unity, we also recognize that creating more forced migration makes little sense.

The big-picture is coming into focus as the fast-track debate heats up. That puts new pressure on members of the US House to recognize, as have Congressional Progressive Caucus co-chairs Grijalva and Ellison that “Congress should not provide blanket authority to approve a deal that puts corporate profits over working families.”