Lucy McBath is a gun control advocate and a congressional candidate in one of the 10 House races where Democratic faithful could play a big role. (AP Photo / Jaime Henry-White)

This November, Democrats have an excellent chance to pick up 23 Republican-held seats and take back control of the House of Representatives, but where should the left focus their time, energy, and resources over the next two months in order to do so?1

Statistician and writer Nate Silver and his team at FiveThirtyEight developed probability models for every congressional district in the country, and concluded that Democrats have a better than 70-percent probability of winning back the House in this year’s midterm elections. Dave Wasserman of The Cook Political Report puts Democratic odds at 60 to 70 percent. But within those macro projections, which races, exactly, most deserve the attention of progressives?2

So that I don’t bury the lede or drag this out like a bad reality show, here is a list of places where my calculations and analysis show that the national progressive movement can have the biggest positive impact on the overall odds of taking back the House.3 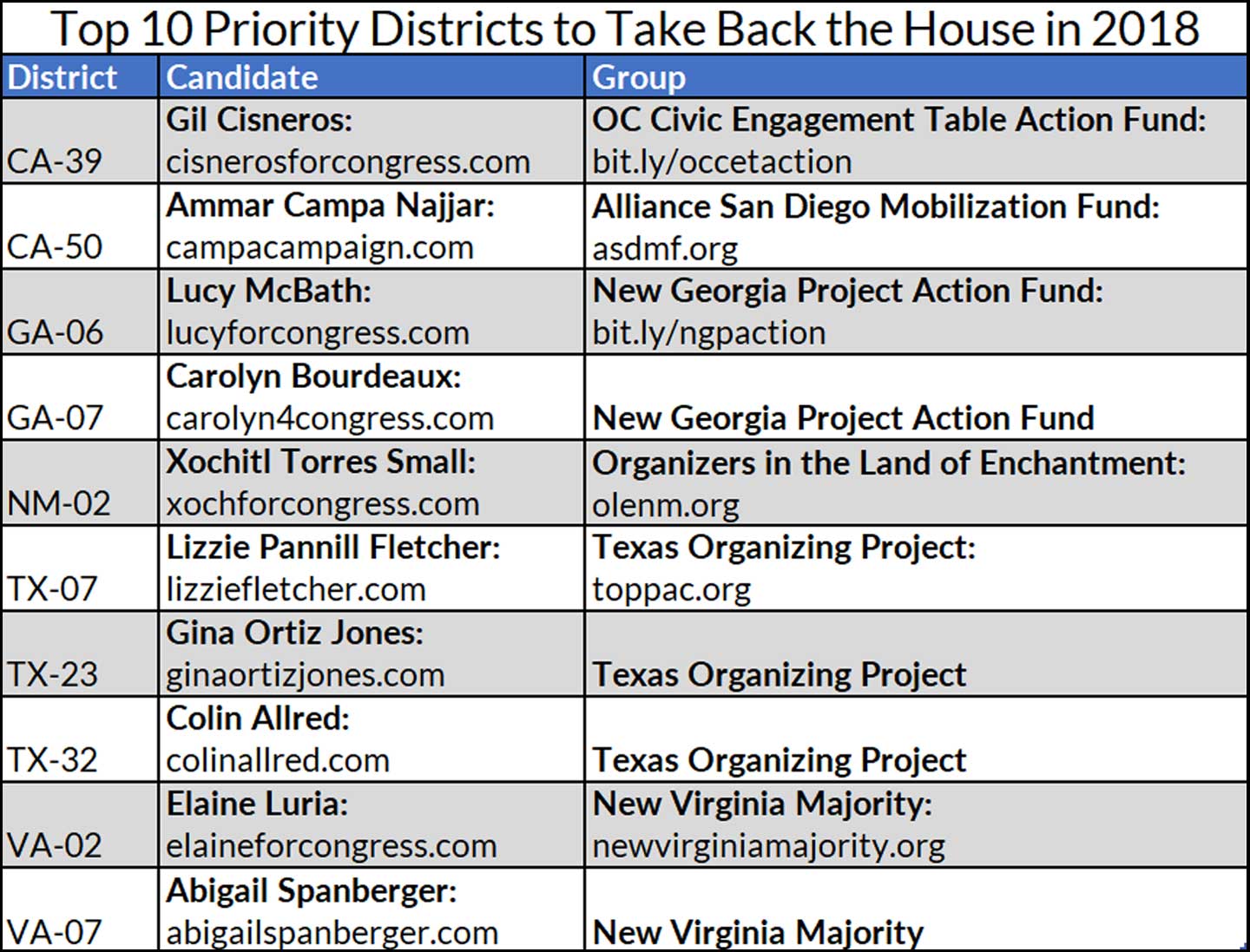 (This table with links to more information about the candidates and the groups working in those districts can be found on my website.)5

These are the contests where investment from progressives can help change the electorate’s composition and create a voting universe more favorable to Democrats. These are also places where there is a local progressive organization with a track record of effectively mobilizing Democratic voters.6

Compiling this list required a significant amount of analytical firepower (from much greater minds than mine) and months of review of multiple data sets and sources. The foundation of this analysis is an extraordinary statistical calculation compiled by the “PhDs of the People”—Dr. Julie Martinez Ortega (the principal researcher for my book Brown Is the New White) and Dr. Tom K. Wong, Political Science professor at the University of California, San Diego. Using a proprietary algorithm that incorporates 22 different statistical variables, they developed projections for Democratic and Republican turnout this fall in 65 competitive districts across the country. While others (such as The Cook Political Report) have analyzed previous totals of votes cast in a district, no one to my knowledge has looked at every individual voter in the competitive districts, reviewed their voting history, and then modeled district-by-district turnout rates to assess each district’s winnability. On top of that, Martinez Ortega and Wong then added a data overlay incorporating the size of the pool of potential Democratic voters, with a particular focus on voters of color (nearly 80 percent of whom historically vote Democratic).7

Standing on that data-rich foundation, I then looked district by district at past election performance, watched videos of the current candidates, and considered the dynamics of the races at this particular moment in history (e.g. the potential resonance of a female candidate running to hold accountable a sitting President of the United States who has bragged about grabbing female private parts, or a candidate of color offering her or his leadership at this moment of resurgent racism across the country).8

Based on a synthesis of the above quantitative and qualitative calculations—along with a pinch of gut instinct from my 34 years in politics thrown in—I’ve rated 57 competitive congressional districts by the likelihood that the Democratic candidate will win. My assessment is that Democrats are likely to win 15 districts, and another 17 are toss-ups. For comparison purposes, here is how my rankings compare to those of Nate Silver and The Cook Political Report:9

In arriving at my Top 10, I excluded all of the “Likely Win” districts, where Democrats are in reasonably good shape. The party needs at least an additional eight seats to take the majority (preferably more, as there are seats currently held by Democrats that are in jeopardy).11

In the toss-up category (where I focus my recommendations), there are two basic types of districts. Some districts have a meaningful number of swing voters—especially suburban women who (according to Wasserman and others) voted for Hillary Clinton over Trump, yet supported the Republican candidate for Congress in 2016. The challenge in those races is to convince those ticket splitters to support the Democratic congressional candidate this time. It is harder for the national progressive movement to have an effect on those races beyond moving money to the candidate to help get her or his message out. That’s important work, but not where I think the biggest value-add is in terms of increasing Democratic odds of controlling the House. (Plus, those races are where the Democrats’ House Majority PAC will be spending tens of millions of dollars.)12

But in other toss-up districts, there are significant numbers of people of color, who historically vote in smaller numbers in midterm elections. If Democratic challengers are able to increase turnout in those communities, that will make many of these districts much more competitive. This is where I think the national progressive movement can make the biggest marginal impact.13

All Hands on Deck

By the way, if you’re part of a progressive organization that is already working in a district not on this list, you should keep doing what you’re doing. All of the volunteering, making calls, sending postcards, knocking on doors, and giving money that has already been done is likely what’s making a district you’re working in so strong that it is not on this list. Those efforts must continue through Election Day to get close to the number of pick-ups needed. But to surpass the magic number of 23 flipped seats, everyone needs to amplify their efforts and giving. What I’m recommending is a set of key races on which to focus that additional energy and money.14

Now Is the Time

The national conditions are favorable, and the trends are in Democrats’ favor. But if 2016 taught us anything, it’s that even the most promising political prospects can change quickly. The political battlefield is broad and varied, but by picking the right battles in the most strategic places, and by redoubling expenditures of time and money, we can collectively increase Democrats’ chances of retaking control of the House of Representatives, and our chances of bringing this national political nightmare to an end.15

Listen to Phillips on the Start Making Sense podcast.