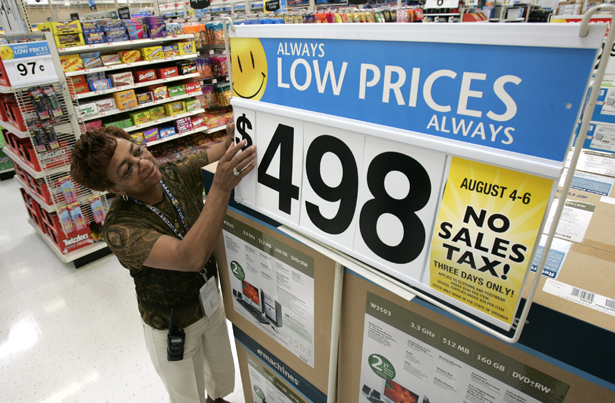 This Black Friday, legions of shoppers will throng to their local Walmart in frenzied pursuit of holiday deals. But it turns out that Walmart has saved the sweetest deals for itself.

In a recent analysis of Walmart’s tax spending, Americans for Tax Fairness (ATF) found that the company “avoids $1 billion a year in taxes” through federal loopholes, and various political shenanigans drive this always-low tax rate: the big-box giant is absorbing government subsidies both directly and indirectly, through its retail operations as well as its ingenious accounting methods. Overall, the retail giant can evade taxes through overseas accounts, on one hand, and raid the public trust on the other by capitalizing on the benefits system.

The losers in Walmart’s tax scheme are the working-class consumers who think they’re getting a good deal by elbowing through the mob surrounding the Xbox floor display. They’re being secretly robbed as the country’s pre-eminent retailer shields hundreds of millions of dollars of revenue from the tax system through creative, perfectly legal strategies to reduce its liability.

One major way Walmart and other multinationals skirt tax obligations, ATF explains, is to funnel the money to an overseas location where it can be subject to “a gaping loophole known as ‘deferral.’ ” The ability to park assets in other countries “gives corporations great incentive to earn profits offshore (or make it look like they are earned offshore)—often by moving jobs overseas.”

ATF estimates that through its globalized business structure, “Walmart is avoiding paying U.S. taxes on $21.4 billion in offshore profits.” And its reach overseas is expanding, with investment in new operations in Africa, Asia and Latin America.

While Walmart’s tax avoidance drains the government’s revenue streams, an even more convenient source of “savings” for Walmart operates on the retail level, through the pockets of consumers and workers who rely on taxpayer-funded federal welfare programs. Many of the associates, warehouse laborers and other low-wage workers in Walmart’s massive production chain depend on federal programs like Medicaid and food stamp subsidies to make ends meet. According to a 2013 congressional research report, “a single 300-employee Walmart Supercenter may cost taxpayers anywhere from $904,542 to nearly $1.75 million per year.”

So Walmart, which is known to be a major lobbying force on food stamp issues in Washington, appears to be suppressing wages and letting Uncle Sam pick up the slack. And it profits further as a purveyor of subsidized food: of every dollar of food stamps spent in this country, roughly 18 cents is spent at Walmart. And according to critics, the benefits of food stamps go primarily to the company and not to customers, whose food security is constrained by the dependence on welfare subsidies that Walmart indirectly promotes.

But Walmart isn’t just shirking its social responsibility; the retailer generously allowed some Oklahoma workers to set up a solidarity food drive to further supplement the low wages of “associates in need.”

Walmart (which has not yet responded to The Nation’s request for comment) has generally defended its business and labor practices against accusations of worker exploitation and tax dodging by arguing that the vast majority of workers earn more than the minimum wage and have a chance to qualify for benefits, and that its compensation practices are “comparable” to those of similar large employers.

Nonetheless, as the country’s preeminent employer of and retailer to working-class Americans, Walmart wields unique clout in Washington. ATF’s report reveals that the company is lobbying fiercely to lower the corporate tax rate from 35 to 25 percent, which could mean it “might save at least $720 million more in U.S. income taxes each year based on the profits it made and the taxes it paid from 2008 to 2012.”

In addition, Walmart and other mega-corporations are pushing Congress to expand the offshoring tax-avoidance mechanisms in order to “permanently eliminate from U.S. taxation profits that are reportedly earned in other countries.” Not only does this drain the tax base, according to ATF, it also encourages the offshoring of jobs. (By one estimate, this model, known as a “pure territorial tax system,” could lead firms to locate some 800,000 jobs overseas.)

Adding to those projections of Walmartization’s social costs are the potential environmental effects of Walmart’s carbon-intensive, fossil-fuel-based mass retail structure.

Yet this is not simply a matter of boosting poorer economies in which Walmart operates. According to ATF, this has a corrosive effect on the global economy by driving the structural inequalities that Walmart has capitalized on.

If the company is given free rein to offshore profits, the group argues, “Walmart’s suppliers with manufacturing facilities in low-tax countries will cut their costs; and the company and its suppliers would be able to increase US tax avoidance by establishing subsidiaries in offshore tax havens and use accounting gimmicks to shift income to those subsidiaries.” This pattern of chasing cheaper territories as tax havens shows how the global financial trends mirror the “race to the bottom” in the production chain. Though analysts have debated the structural effects of globalization on “development,” labor advocates point to a manufacturing and trade structure that fuels social inequality and perpetuates poverty wage jobs and exploitative working conditions in the Global South.

The next congressional session may see a further onslaught of tax slashing and austerity budgets. Noting that the House Republican agenda has revolved around budget cuts, ATF executive director Frank Clemente tells The Nation, “Business will be pushing them very hard to promote tax reform in their interest, as opposed to in the interest of the rest of us.” And a more conservative budget “means making no investments” in social programs, and further erosion of healthcare, education and public infrastructure spending. “Unless we deficit spend to pay for those things, we’ve got to raise the money to do it, and that means raising revenue.”

Since Walmart seems hell-bent on avoiding contributing to any of those revenue needs for social programs, American shoppers should be sure to stretch every dollar this holiday season—you may need a little to fall back on in the coming months.