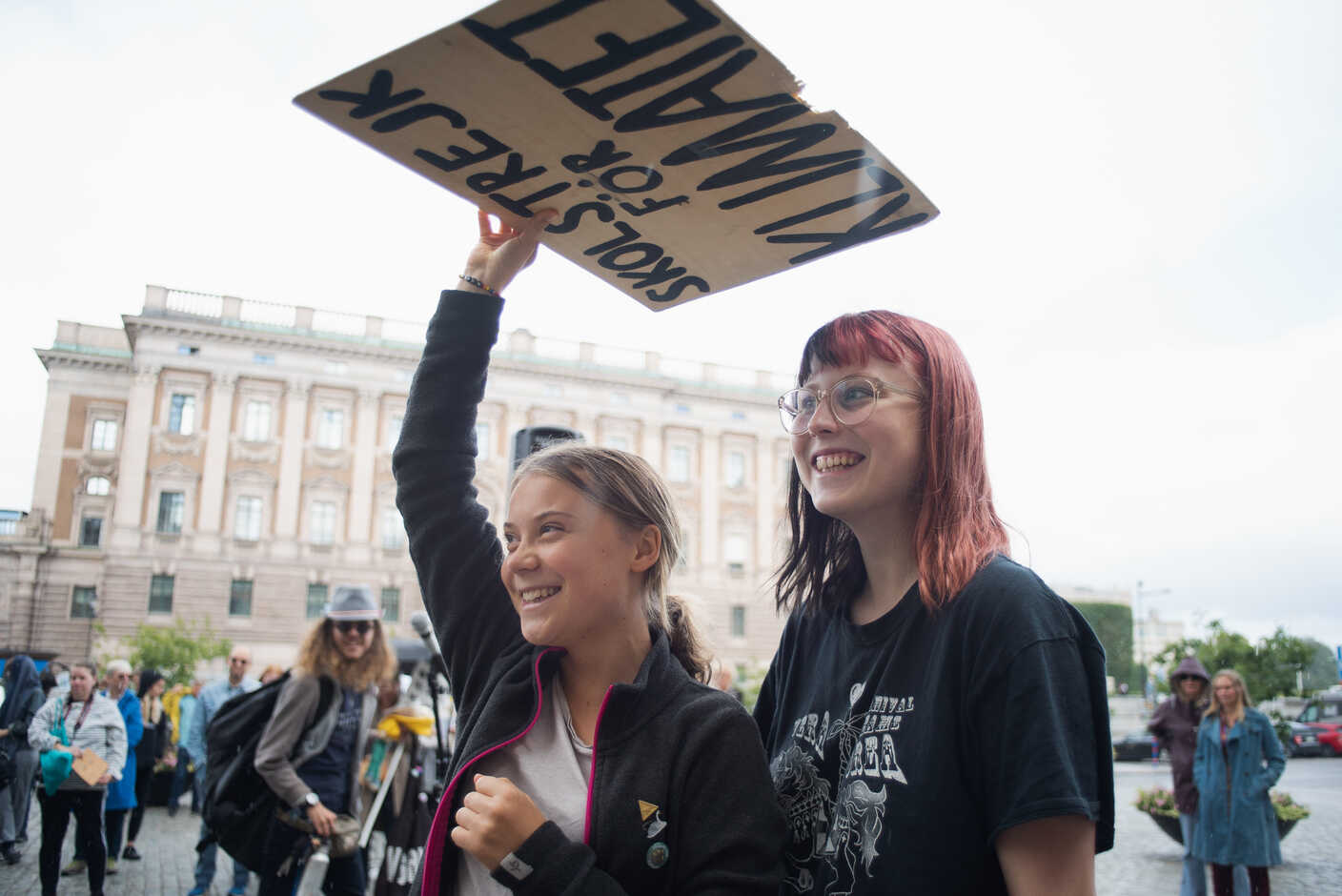 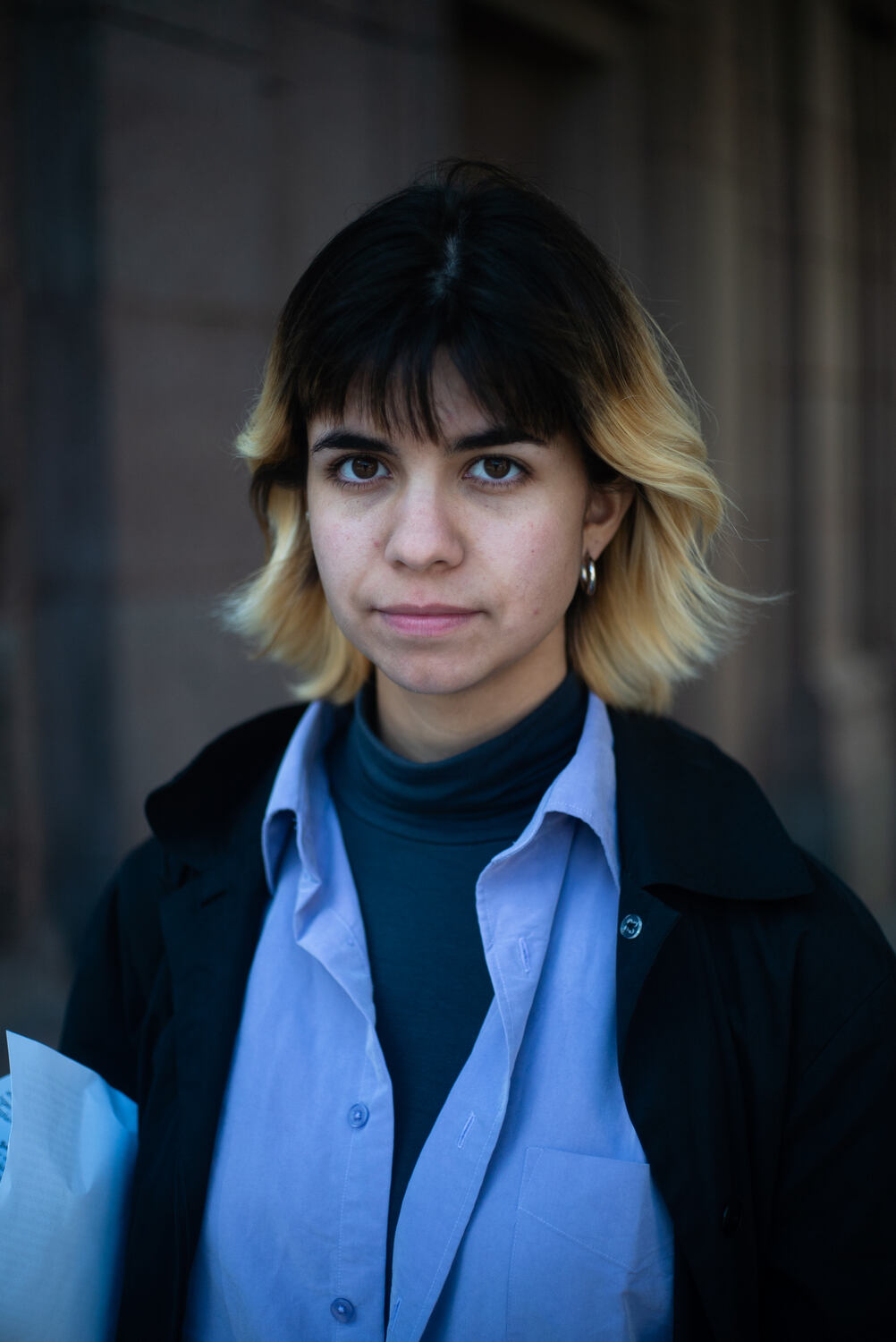 “I’ve never met so many people that I connect with so strongly,” says Claudia Kvarnborg, 19, who began striking a year ago. “We’re friends with everyone and we hang out alot on our free time.” (Ali Withers for The Nation)

tockholm—Exclamations of laughter began to fill Mynttorget, the square in front of Sweden’s Parliament House, as a huddle of teenage climate activists saw their friends round the corner, and rushed to give everyone hugs. 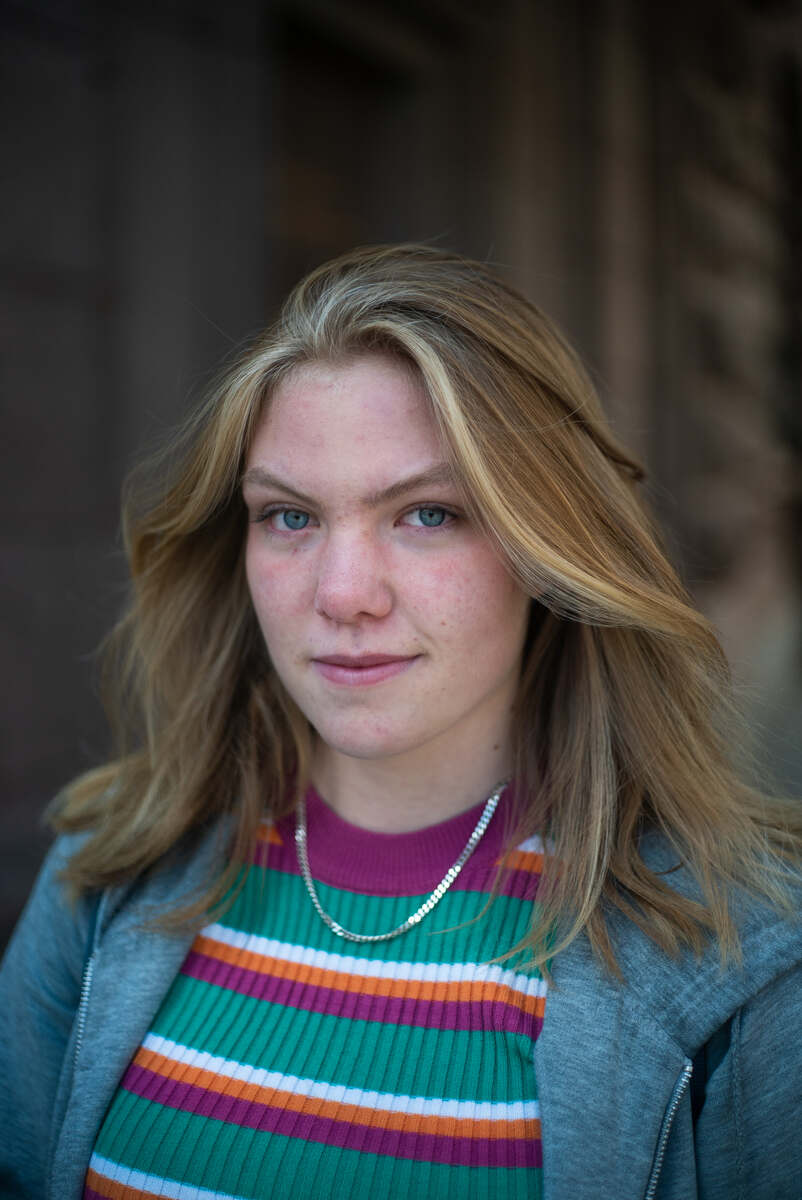 “The leaders don’t take any action. They hear us, but they don’t listen,” says Filippa Paperin, 19, who started striking four years ago and will vote in her first general election this September. “We don’t see any change.” (Ali Withers for The Nation)

“I’ve never met so many people that I connect with so strongly,” says Claudia Kvarnborg, 19, who warmed up for her turn at the mic by rehearsing climate justice songs with her two friends.

It was week 211 of the School Strike for Climate. A little over four years ago, Greta Thunberg, then 15, skipped school to protest outside of Parliament ahead of the 2018 Swedish general election, which evolved thereafter into the Fridays for Future movement. The movement gained international traction, with the goal of putting moral pressure on politicians to enact policies that would meet the Paris Agreement on fighting climate change.

As Sweden prepares to go to the polls again in an election season dominated by discussions around crime and immigration, tireless teenage climate activists who, over the past years, have formed a dedicated core to push for climate action—and in doing so have formed bonds that help them cope with climate anxiety— are using the Fridays leading up to the election to refocus the national conversation. But they question if politicians are getting the message.

“I feel very small and that [the leaders] don’t listen to us. They hear us, but they don’t listen,” says 19-year-old Filippa Paperin, who joined her first strike at age 15. “We don’t see any change.” 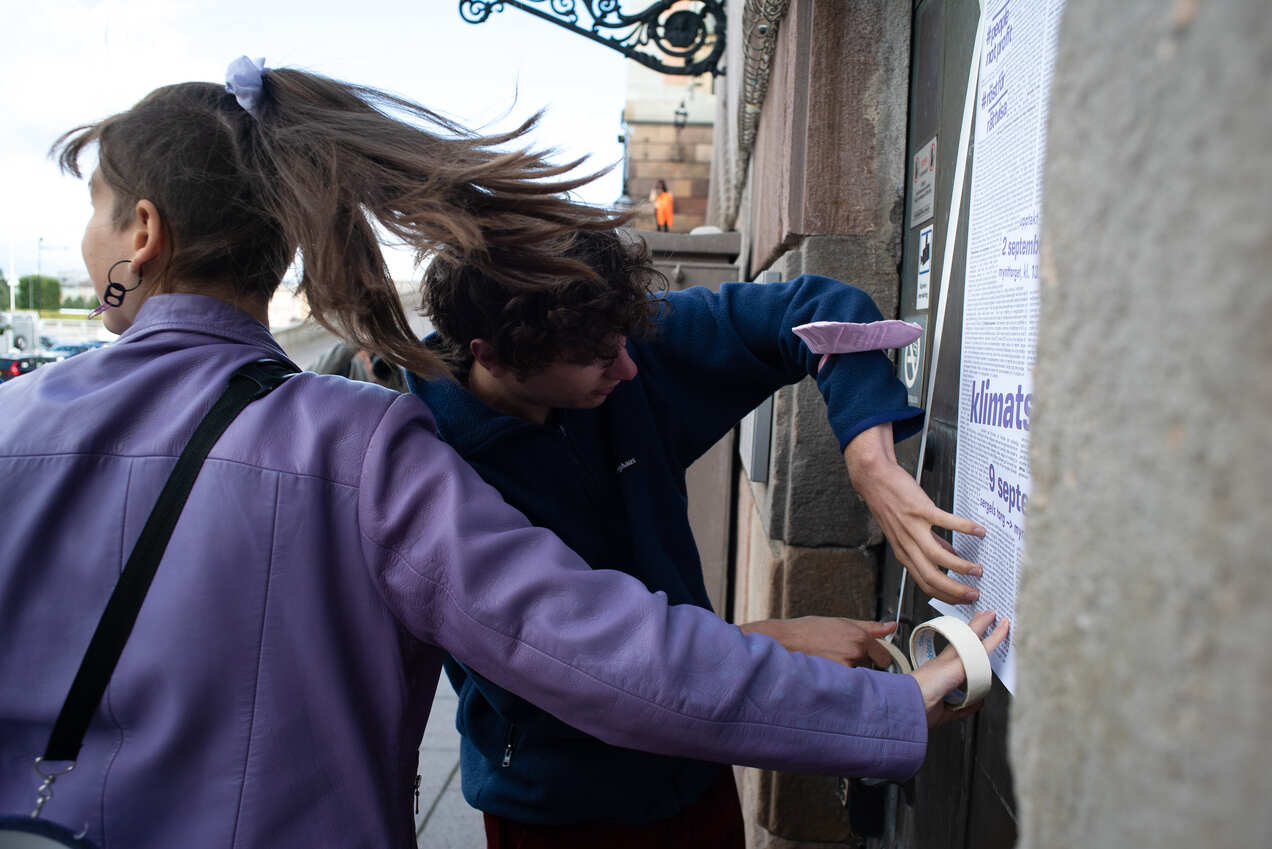 “Every time we strike, every time we get any sort of positive reactions and get more people to show up and we see solidarity between the climate movements and other movements— that’s everything that gives me hope,” says Anton Foley, 19, as he tapes up a poster calling for a climate strike ahead of Sweden’s general election. (Ali Withers for The Nation) 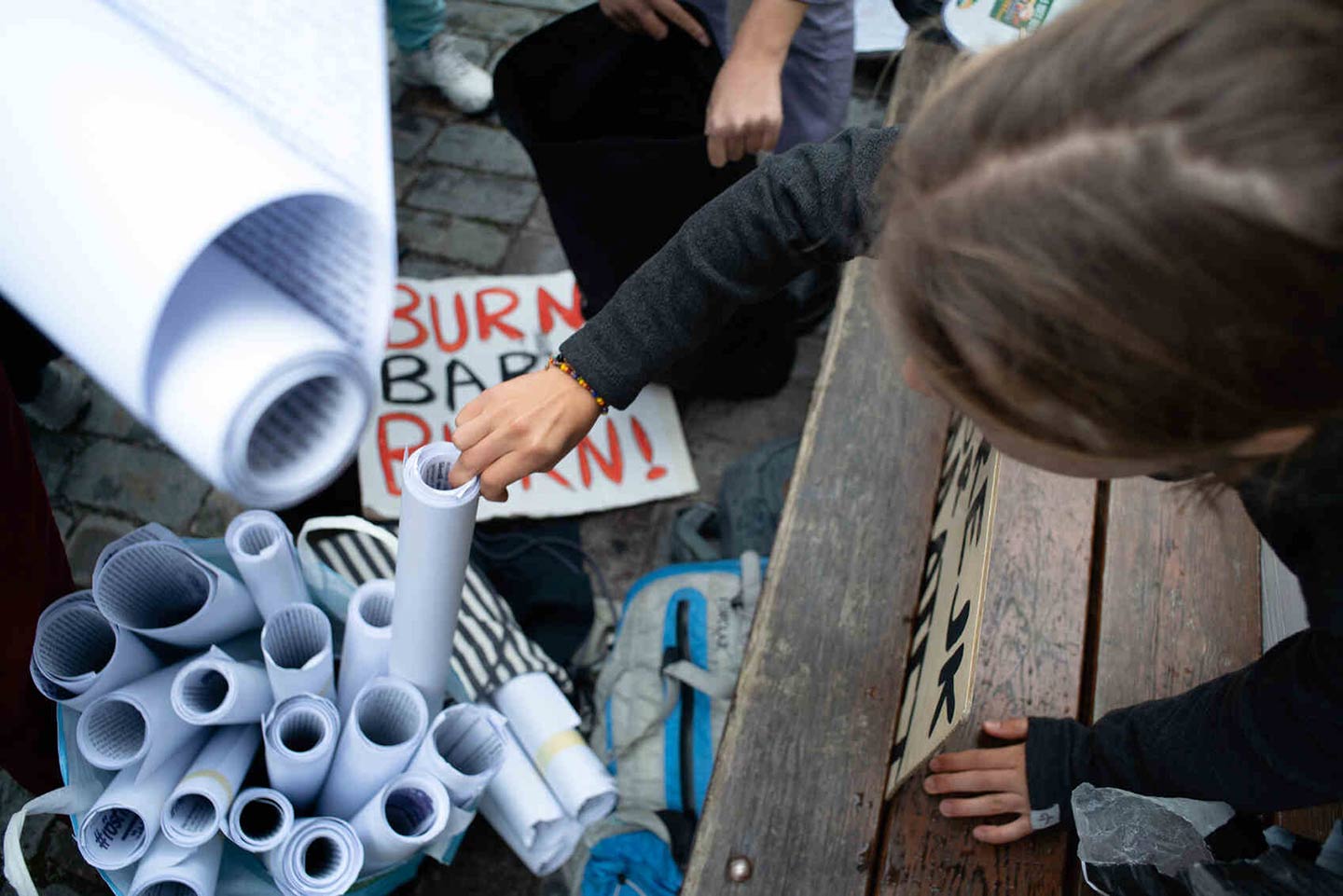 Greta Thunberg reaches into a bag of climate strike posters. (Ali Withers for The Nation)

In a video posted online last week, Thunberg was bleaker. “If your hope rests on some almost burnt out teenagers doing this after school… well then there’s not much hope. We need to build hope, and we do that with people joining the movement.” 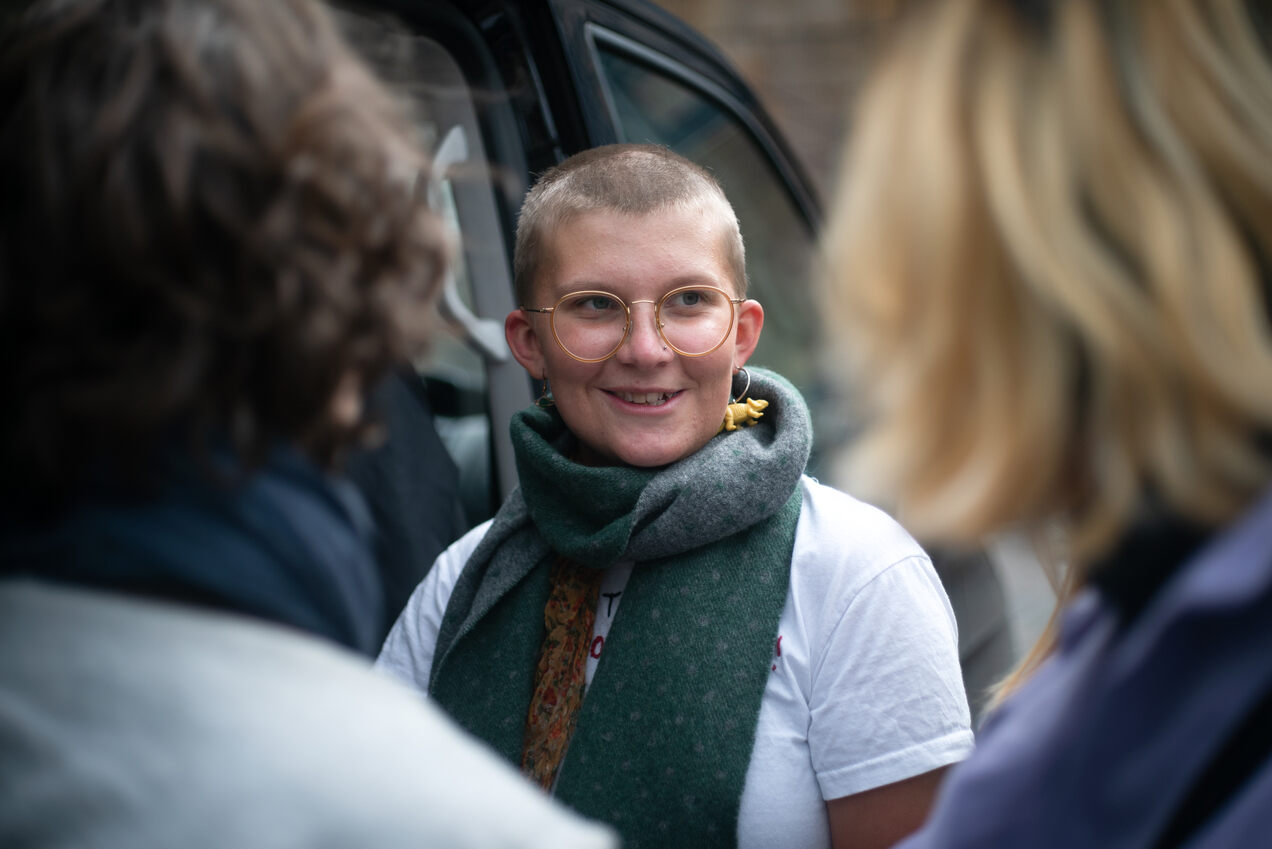 “Because it’s a grassroots movement, everyone that joins can have the same responsibility. We try to avoid hierarchies,” says Agnes Hjortsberg, 20, as organizers get ready for a rally in front of Sweden’s Parliament House. (Ali Withers for The Nation)

But 19-year-old Thunberg, whose star power led the 2019 youth climate revolution—and whose personal story has been spun into a best-selling book, a Hulu documentary, and even a theatrical play—was nowhere to be seen on the square.

“I have a lot of climate anxiety and it’s like, this movement it’s sort of what makes it feel okay,” says Anton Foley, 19. “It’s given me so much hope.” (Ali Withers for The Nation) 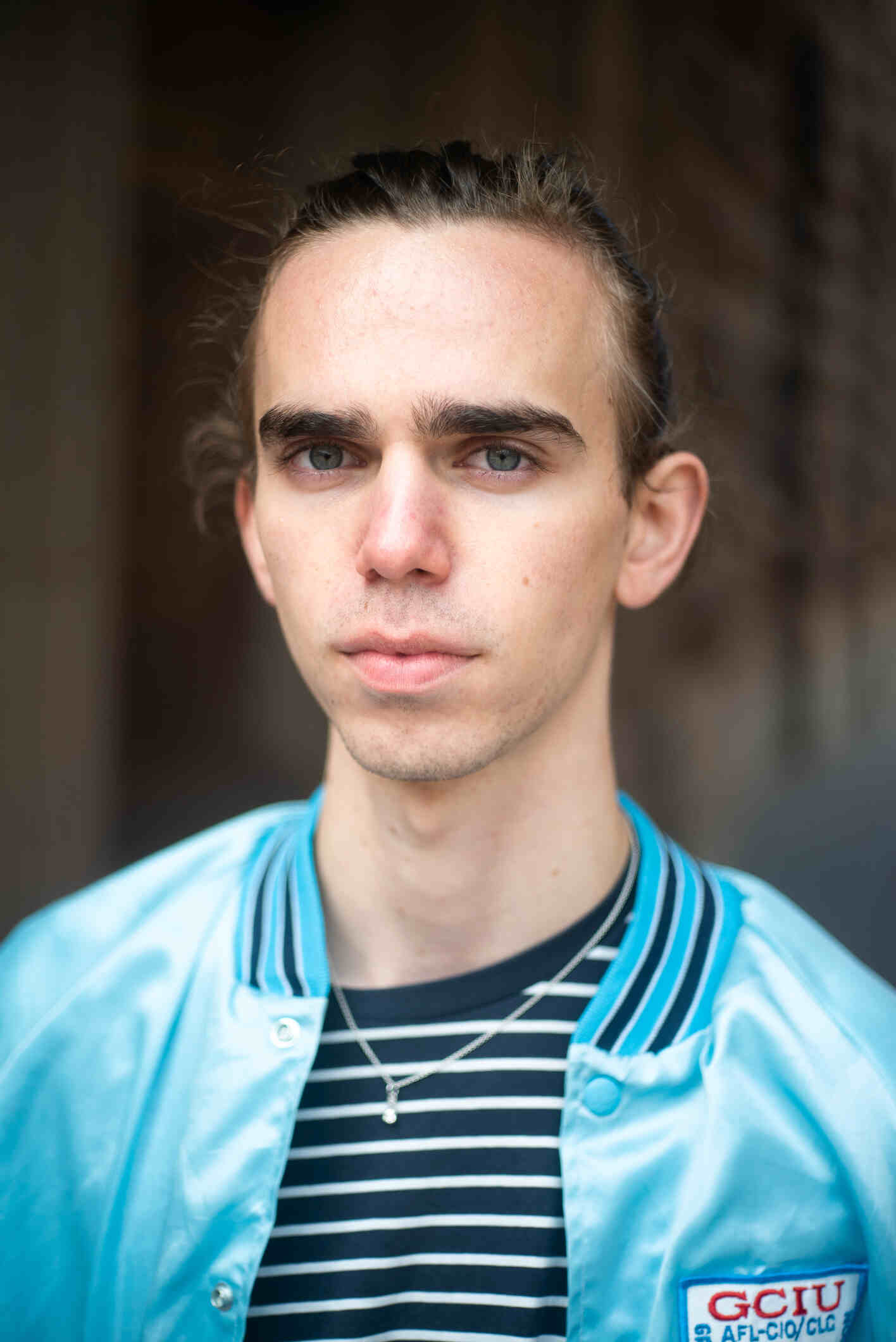 “I think it’s important for people to realize that it’s not just Greta,” says Falk, 21, who has be striking regularly for two years. “Of course she started it and she’s done great work for the movement. She’s a great person! I don’t think it helps to focus on her, because there’s so many Indigenous and impacted people around the world that should be heard more.” (Ali Withers for The Nation)

“Where’s Greta?” a woman urgently asked other teen organizers. “Is she going to come here? I’ve been here since 11 o’clock.” The organizers shrugged in her direction. “That’s her choice if she comes,” they said as they continued setting up.

Organizers are used to warding off Thunberg’s fans. “Well a lot of people are very creepily obsessed and come looking for Greta,” said Anton Foley, 19, an organizer who’s been striking for two years. “Aside from it being really creepy with a lot of adults, usually men, going around and looking for a teenage girl like that, it’s also just telling of the celebrity status she gets. All she’s trying to do is be part of a movement and give the questions and issues in focus the spotlight.”

Focusing on climate change, though, continues to heighten everyone’s climate anxiety. Many said that interacting with so much climate news could be “devastating” or “terrifying.” 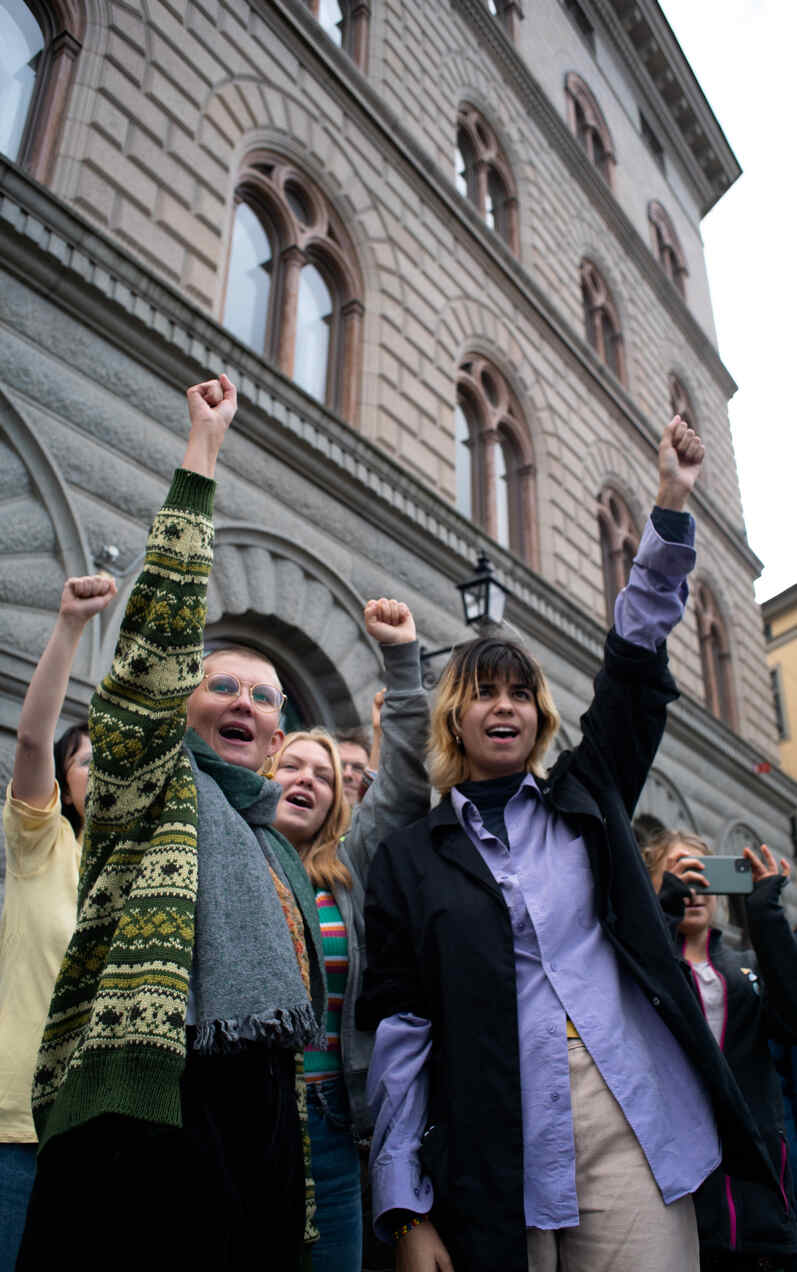 Fridays for Future teen organizers cheer in support at a rally on Friday, September 2, 2022, in front of Sweden’s Parliament House. The Friday strikes have been ongoing for four years. (Ali Withers for The Nation)

“Climate talk is all I surround myself with, because I spend all my free time and, to be frank, some school time as well with organizing,” says Agnes Hjorstberg. “I don’t see any other way of living, because this is what’s going on now.”

However, organizers said that, in equal turn, their friendships and solidarity in the movement made their climate anxiety bearable.

“I feel a lot more hope. I feel a lot more like I can handle [the anxiety],” said Falk, 21, who said striking could sometimes feel more impactful than individual choices, like trying to avoid buying plastics. “Every time we strike, every time we get any sort of positive reaction and get more people to show up, and we see solidarity between the climate movements and other movements—that’s everything that gives me hope,” added Foley.

“I’m so grateful for all the people I’ve met,” said Hjorstberg. ”I think that’s a very good support system in dealing with climate anxiety and the rage towards politicians.” 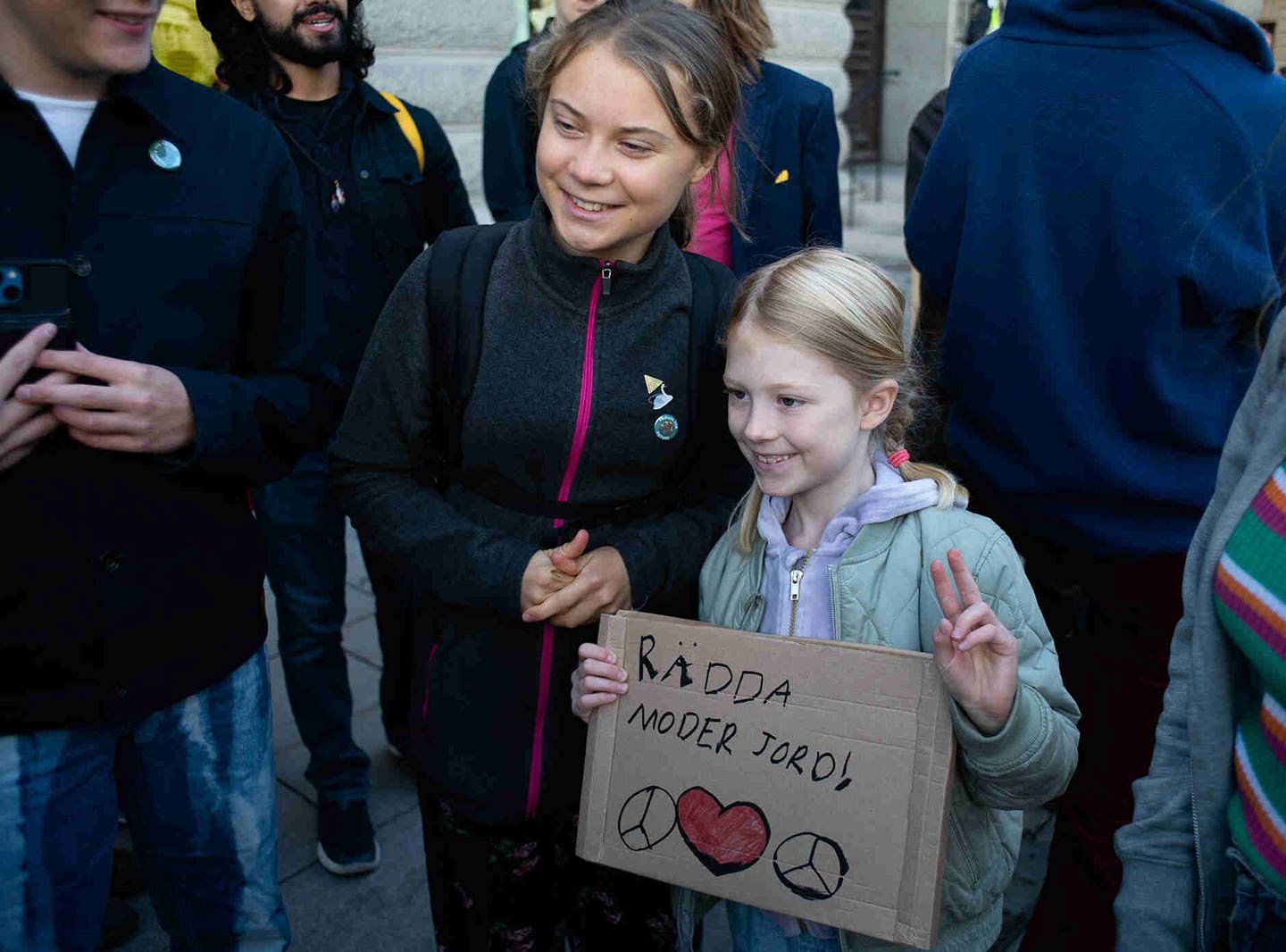 “Greta is my idol,” says Jane, 9, who asked her mom to bring her to the strike. (Ali Withers for The Nation)

Thunberg did arrive, shortly before the pep rally got underway, laughing with fellow organizers as they crowded under her “School Strike for Climate” sign to escape the drizzle. She didn’t take the podium, though. Instead, a handful of other teens took turns highlighting different aspects of what they called “a global and existential crisis,” before hopping off stage into an embrace of hugs. 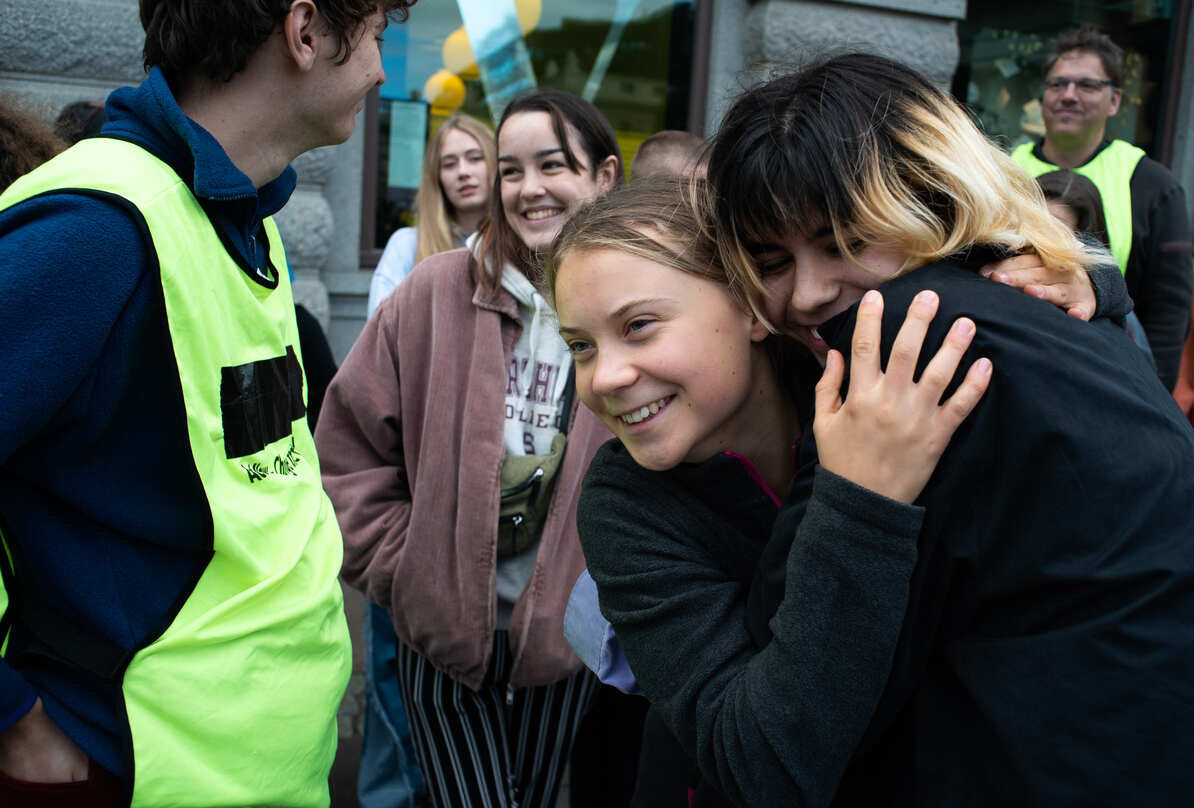 Greta Thunberg, 19, hugs strike organizer, Claudia Kvarnborg, 19, after she finishes a speech at a rally on Friday 2, 2022, in front of Sweden’s Parliament House. (Ali Withers for The Nation)

“We’re friends with, like, everyone. It’s just fun that we’re getting a lot bigger, so the movement is getting stronger—and yeah, a stronger bond,” says Kvarnborg, as she finished her turn at the mic. “I think we’re having a bigger impact than we maybe believe that we have.”