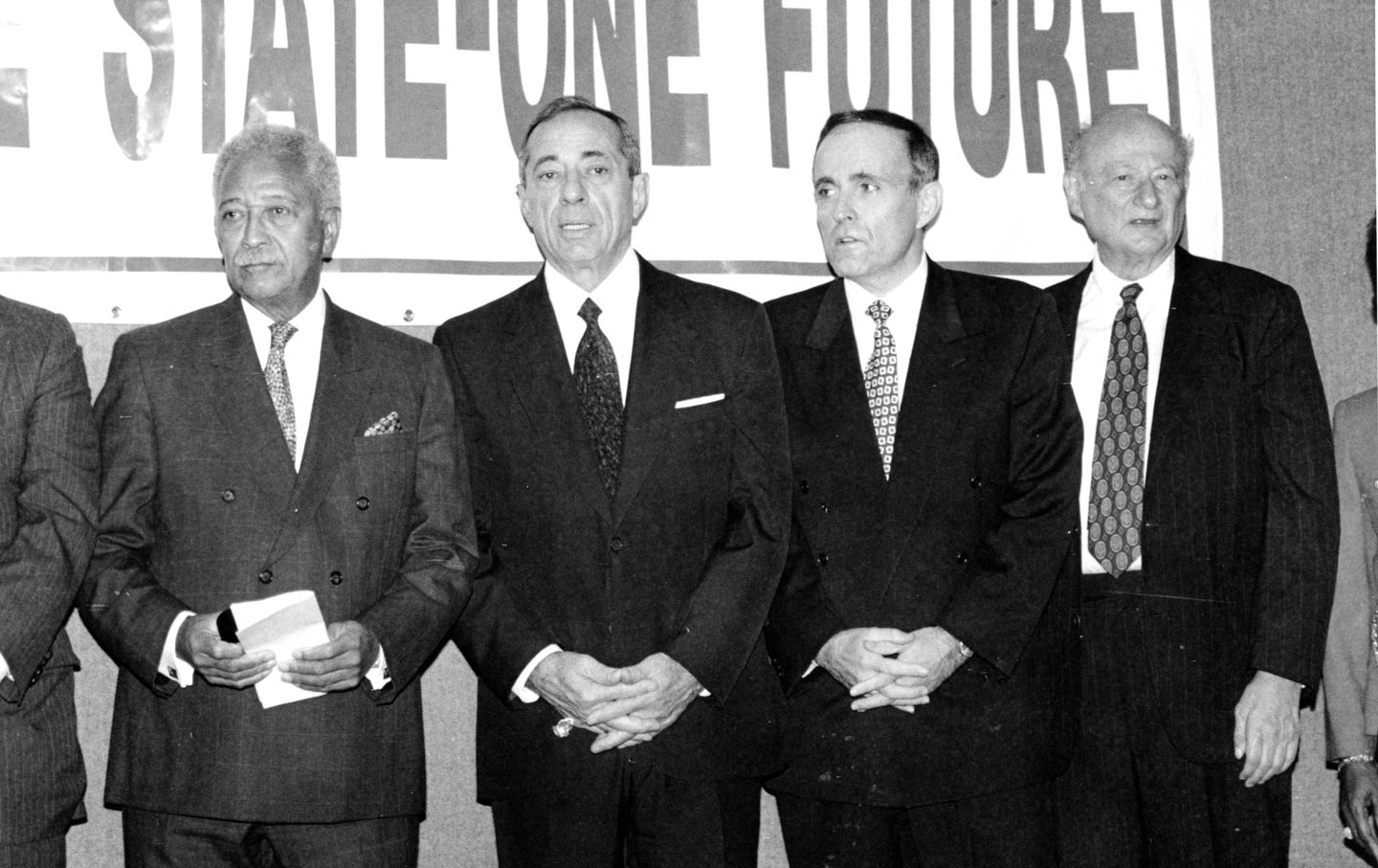 David Dinkins campaigned for mayor of New York in 1989 as a longtime member of Democratic Socialists of America who had worked for decades on progressive causes and served as New York cochair of the Rev. Jesse Jackson’s presidential bid in 1988. The time was right and the city was ready for change. Dinkins beat incumbent Mayor Ed Koch in the Democratic primary and then defeated a high-flying Republican who had served as United States Associate attorney general and the United States attorney for the Southern District of New York during the presidency of Ronald Reagan.

The Republican was Rudy Giuliani, who would go on to serve two terms as mayor and then degenerate into shameless self-parody as the most outrageous defender of Donald Trump’s presidency and a conspiracy-theory spewing advocate for the president’s failed attempt to overturn the results of the 2020 election. Giuliani’s legal strategies, with their on focus disenfranchising Black voters in urban centers such as Milwaukee, Detroit, and Philadelphia, have been called out as racist and decried by officials such as Michigan Attorney General Dana Nessel, who charged on November 11, “Really the themes that we see, that persist, are this: Black people are corrupt, Black people are incompetent and Black people can’t be trusted. That’s the narrative that is continually espoused by the Trump campaign and their allies in these lawsuits.”

For some who knew Giuliani only as “America’s mayor,” his abuses on behalf of Trump have been shocking.

But it’s nothing new. Dinkins, the first Black mayor of New York, who has died at age 93, had to battle Giuliani’s race-baiting politics more than 30 years ago in the first of a pair of charged New York City mayoral races. Dinkins, who had built a widely celebrated multiracial coalition to win election as Manhattan borough president in 1985 and then beat Koch in the 1989 Democratic primary, preached unity, declaring that he would “never lead by dividing, by setting some of us against the rest of us or by favoring one group over others.” But Giuliani, who was trailing in the polls after winning the Republican primary, mounted a campaign that anticipated the divisive politics of Trump’s presidential bids.

“David Dinkins has associated himself with the philosophy, programs and policies of Jesse Jackson,” declared Giuliani, who warned that electing a Jackson Democrat as mayor “would bankrupt this city.”

The Republican even suggested at one point that Dinkins might make New York City “a Jesse Jackson beachhead in his quest for the presidency.”

Giuliani claimed that using Jackson, a groundbreaking Black presidential candidate, as part of an attack on Dinkins, who was bidding to become New York City’s first Black mayor, had “nothing to do with race.” But Barry Feinstein, the powerful president of New York’s Teamsters Local 237, told The Washington Post, “Clearly, Giuliani is trying to pit Black against white. He’s trying to turn this into a race war.” National Rainbow Coalition director Joe Johnson warned that Giuliani was “injecting divisive racial overtones into the campaign.” The Republican, argued Johnson, was appealing to “the worst fears of people.”

Things got uglier as Giuliani’s campaign ran an ad in a Yiddish-language newspaper that mischaracterized Dinkins’s support for a Palestinian state in a ploy to discourage Jewish voters from backing the Democrat. The ad again highlighted Dinkins’s support of Jackson, whose 1984 reference in New York as “Hymietown” had strained relations with the Jewish community. It was all part of a crude campaign developed by Roger Ailes, a Republican consultant who would go on to head Fox News. Describing the ad as “a naked effort to play on Jewish fears,” Rabbi Balfour Brickner said, “The net effect of what he’s doing is to increase racial polarization. It’s a contemptible low blow.”

Giuliani’s 1989 campaign was starkly unfair to Dinkins, who had a preached a gospel of respect and cooperation that imagined the city as a “gorgeous mosaic.” Ultimately, however, Dinkins prevailed by 47,000 votes—not a landslide but a credible victory that was far outside the range for a recount challenge. Yet Giuliani would go on to suggest, with no evidence to support him, that the Democrat had benefited from voter fraud. That’s a lie Giuliani has been telling for years, with such crude claims as, “I’ve found very few situations where Republicans cheat. They don’t control the inner cities the way Democrats do.”

Giuliani’s divide-and-conquer appeals to racial prejudice, and his blatant dishonesty, helped him to narrowly defeat Dinkins in a 1993 rematch that gave the Republican a national platform and, for a time, that reputation as “America’s mayor.” But Giuliani never changed, as his current lies and racist appeals on Trump’s behalf, confirm. History will be rough on Giuliani, just as it will be kind to Dinkins.

“Giuliani is to Dinkins what Trump was to Obama,” Christina Greer, an associate professor of political science at Fordham University, told WNYC’s Brigid Bergin in the truest assessment of the two New York mayors. “Someone who trolled a Black man who had way more class dignity, education and intelligence [and] constantly incited racist tropes to distract from the fact that this Black person was actually doing a solid job.”