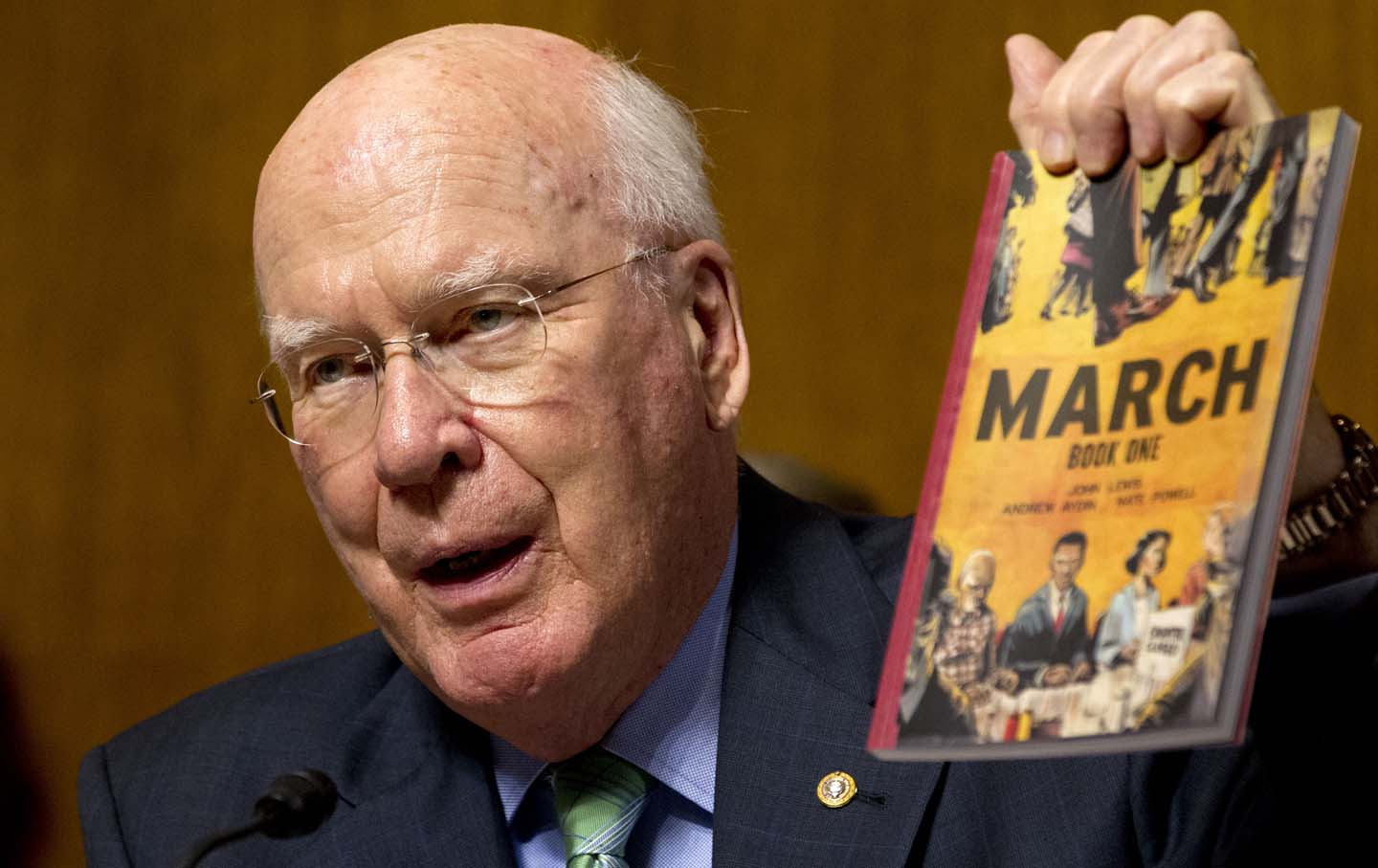 Senator Patrick Leahy holds up a book on the Selma March.

Patrick Leahy made history when he was elected to the US Senate in 1974. For the first time since the Constitution was amended to make way for the election of senators, the voters of Vermont elected a Democrat to represent them in the chamber, and it was Leahy, the 34-year-old state’s attorney for Chittenden County.

At the time, Leahy was the youngest senator ever elected from Vermont. He took office as one of the two youngest Democrats in the chamber. The other was Delaware Senator Joe Biden.

Leahy will soon make a decision on whether to seek a ninth term in the Senate. Politico says he’s likely to go for it. If the voters of Vermont reelect Leahy in 2022, the chamber’s most ardent Grateful Dead fan would be on track to be its longest-serving member.

Leahy has served 46 years and could, during a ninth term, pass Byrd’s mark.

Like Byrd, Leahy chairs one of the Senate’s most powerful committees, Appropriations. Leahy is, as well, the senior member of the Judiciary and Agriculture committees. He serves as an ardent supporter of labor rights (with a 97 percent lifetime rating from the AFL-CIO), environmental protection and climate justice (League of Conservation Voters lifetime rating: 94 percent), and a woman’s right to choose (NARAL Pro-Choice America current rating: 100 percent). Leahy voted against going to war with Iraq, twice supported impeaching Donald Trump, and once hosted the Dead’s Jerry Garcia, Bob Weir, Phil Lesh, and Mickey Hart at a luncheon in the Senate Dining Room. (Then–South Carolina Senator Strom Thurmond said to Garcia, “I’m the oldest member of the United States Senate, you hear me, boy?” Garcia after meeting Thurmond: “You know, I never had an experience anywhere like that, even when I used to drop acid.”)

Pollsters and pundits see Leahy as a likely winner in 2022—noting that Vermonters have a history of keeping senior senators in office.

Leahy’s predecessor, Republican George Aiken, was the dean of the Senate when he retired in 1975. Born in 1892, during the presidency of Benjamin Harrison, Aiken served 34 years in the chamber, arriving during Franklin Delano Roosevelt’s second term and departing when Gerald Ford occupied the Oval Office.

Leahy’s junior colleague, independent Bernie Sanders, is 79, and was easily reelected to a third term in 2018. The senators are genial colleagues (Leahy backed Sanders for president in 2020), despite the fact that they once ran against each other. In the 1974 election that first sent Leahy to the Senate, Sanders finished in third place as the candidate of the independent, left-wing Liberty Union Party.