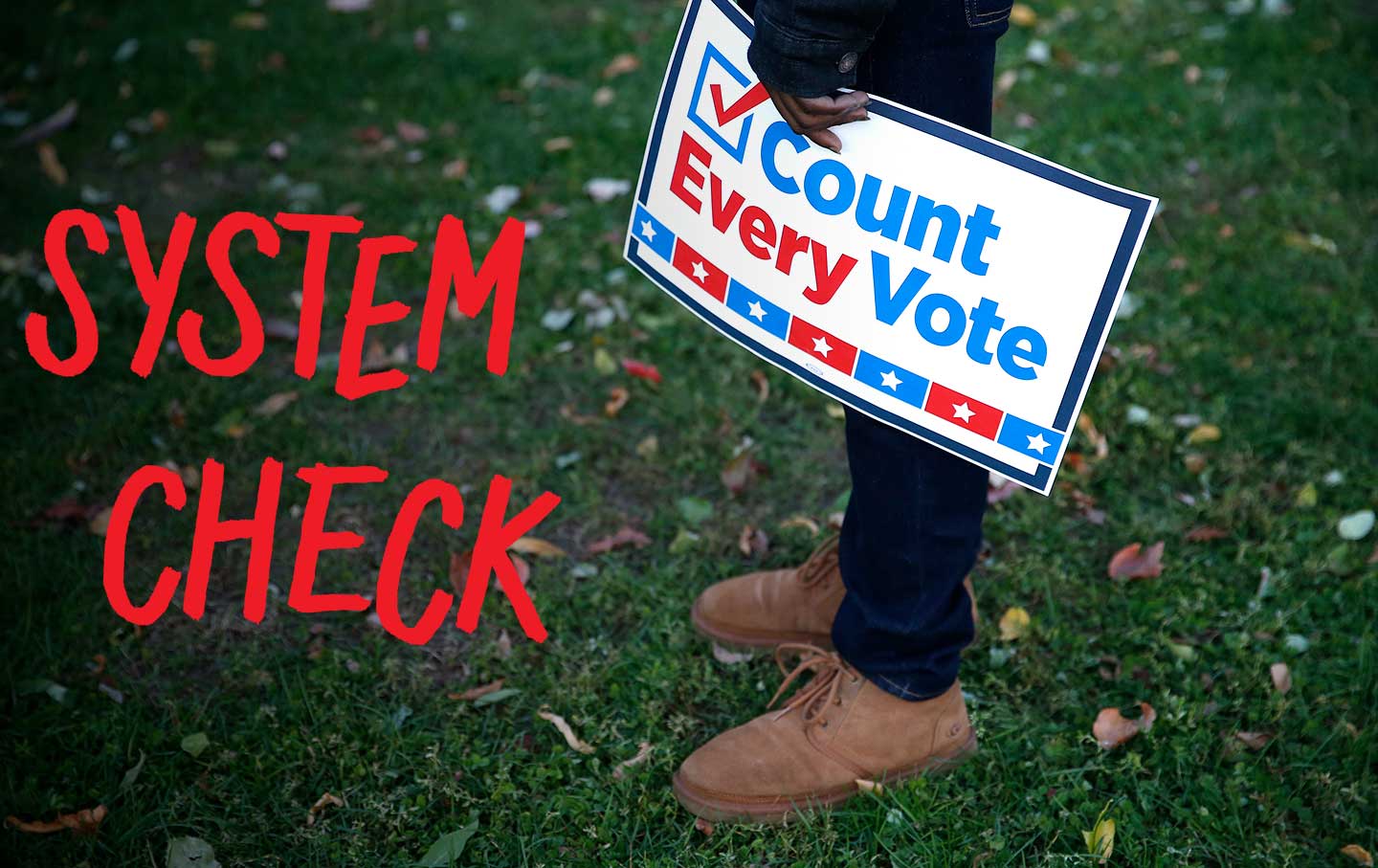 A rally in Boston to ensure that every vote is counted, November 4, 2020. (Jessica Rinaldi / The Boston Globe via Getty Images)

Last week on System Check, your hosts Melissa Harris-Perry and Dorian Warren dug into all the different ways this country makes it hard for people to cast their ballot. But it’s one thing to vote—on this week’s show, they explain why it’s a whole other thing to get that vote to matter.

It’s time for a system check on how your vote gets counted.

Listen to Episode 2 of System Check.

Any conversation about representation in our democracy has to start at the foundationally unequal institution of the electoral college. Rashad Robinson, president of Color of Change and spokesperson for Color of Change PAC, joins us to discuss how barriers to casting and counting the votes of Black Americans have been “baked in” to our political system.

Next up, Kristen Clarke, president and executive director of the National Lawyers Committee for Civil Rights Under the Law, weighs in on the Republican strategy to nominate and confirm Amy Coney Barrett to the Supreme Court. Is it a coincidence that Barrett has just been confirmed to the court—one leg of the conservative movement’s “three-legged stool” of countermajoritarian rule—just in time to strike down the will of the majority of voters?

Our history is important, and can the dark periods in our past can help guide us through our struggles today. Professor Blair Kelley of North Carolina State University offers both a deeply historical and personal perspective on voter suppression, grounded in her family’s own experiences during slavery, reconstruction, and in the Jim Crow South.

Just as racism helps explain the particular ways in which our institutions were formed, it also provides a cudgel for those in power, and those who feel threatened by equality, today. The Nation’s own sports editor, Dave Zirin, joined us on our election night live coverage to remind us of a single key insight to help make sense of the election results. And Cristina Beltran of New York University, author of Cruelty as Citizenship: How Migrant Suffering Sustains White Democracy, helped us think about how “white domination” is in fact, a civic experience for non-white voters hoping to cast a vote and have it count.

But it wouldn’t be a System Check if we didn’t talk about the ways we can get out of our current mess. The Nation’s strikes correspondent, Jane McAlevey, talked to us about the intersection of a movement moment with a presidential election, and the necessity of nonviolent direct action. And two members of Congress join us to talk about what is to be done once the votes are counted: the Congressional Progressive Caucus cochair, Representative Pramila Jayapal,instructs us on a path forward that centers intersectionality, and the Congressional Black Caucus chair, Representative Karen Bass, reminds us of the necessity of outside pressure on all elected officials (Bass, like so many progressive champions, won her reelection bid this week).

Finally, Dreamer Astrid Silva of Dream Big Nevada has the last word this week, as she talks to us about what this election means for millions like her who are unable to vote, whose fates hinge on the final vote count, but who remain hopeful, no matter the outcome.

Looking to turn all this analysis into action? We give listeners three action items this week:

System Check is a project of The Nation magazine, hosted by Melissa Harris-Perry and Dorian Warren and produced by Sophia Steinert-Evoy. Support for System Check comes from Omidyar Network, a social change venture that is reimagining how capitalism should work. Learn more about their efforts to recenter our economy around individuals, community, and societal well-being at Omidyar.com. Our executive producer is Frank Reynolds. D.D. Guttenplan is editor of The Nation; Erin O’Mara is president of The Nation. Our theme music is by Brooklyn-based artist and producer Jachary.