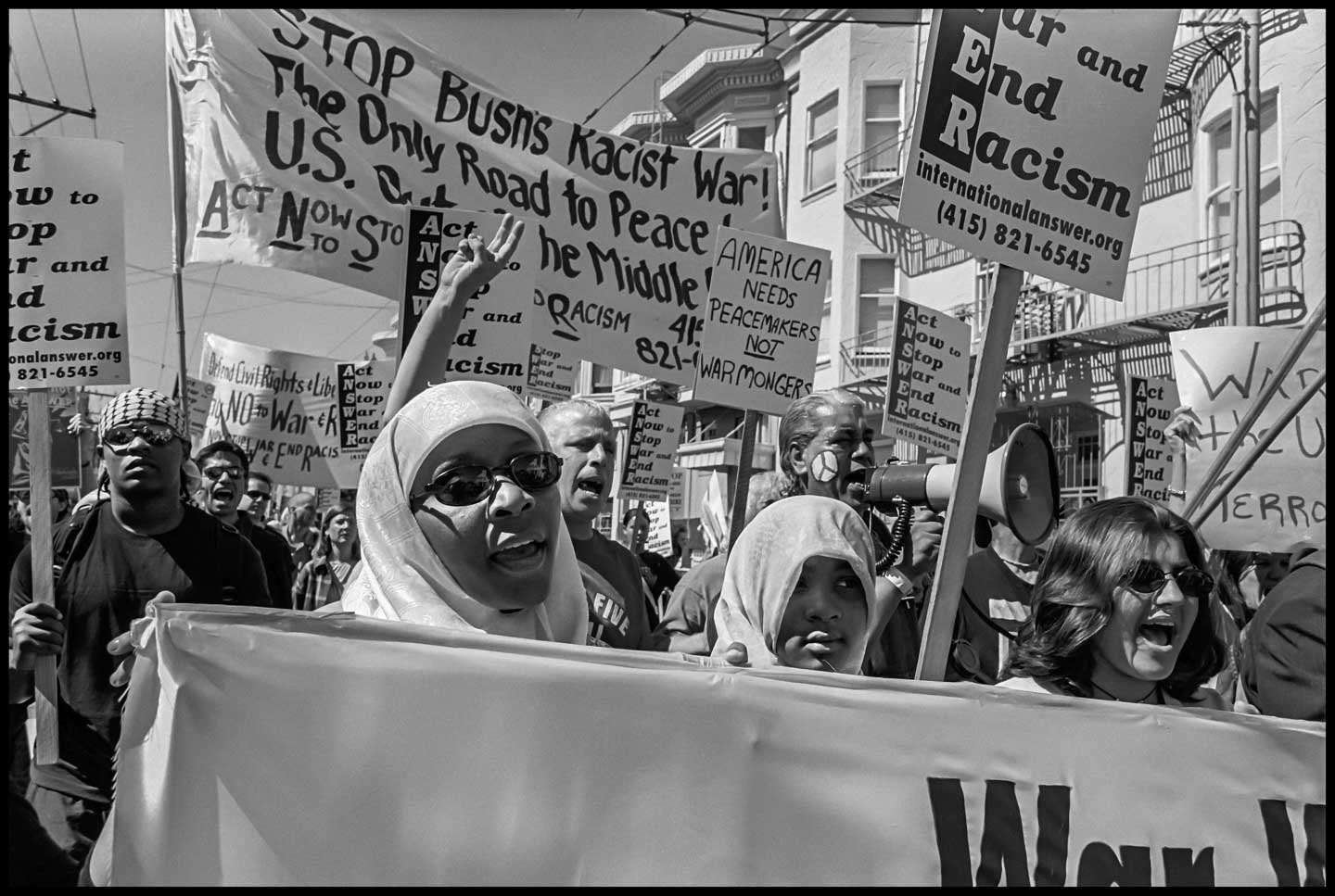 The first march in San Francisco against the impending invasion of Afghanistan. September 29, 2001. (David Bacon)

After 20 years of US imperial intervention, Afghanistan is a deeply war-wounded country, its cities in ruins and hundreds of thousands of its people in graves. It didn’t have to end this way.

In those dark days after the September 11, 2001, terror attacks, a majority of Americans did support military intervention in Afghanistan. But there was also widespread grassroots resistance. From the first cries for war, tens of thousands of people went into the streets in cities across this country to call for it to stop even before it began. The fact that these pleas for peace and sanity ultimately went unheard does not mean that they should be forgotten—we must learn from them, and hopefully chart a more peaceful future for our country and the world.

Congress was eager to go to war in 2001. In fact, East Bay Representative Barbara Lee was the only member of Congress to vote against Joint Resolution 64, the resolution that granted then-President George W. Bush the power to retaliate against anyone the administration believed had helped plan the 9/11 attacks. Congress provided the justification and administrations, both Republican and Democratic, used it for two decades of invasions from Afghanistan and Iraq to Syria, Somalia, the list goes on.

The first marches followed Congress’s vote by just two weeks, at the end of September. Once the invasion began, in October, the protests only continued. By October, also, our government began a crackdown on Muslims in the United States, with illegal roundups and imprisonment in hastily organized “detention centers.” Around the country, demonstrations condemned the racist raids, while government repression legitimized a broad wave of anti-Muslim attacks. People protesting the war in Afghanistan also quickly linked it to US Middle East policy in general, including vigorous US support for Israel’s military offensive in the occupied territories during the second intifada. Beyond the terrible human cost of the war, protesters also pointed out the enormous economic waste the war represented, with the enormous military budget the most recognizable symbol of this bloat.

Ultimately, the protesters were fighting for a world in which war was not the immediate response to a crime like 9/11, in which Afghan children were not acceptable collateral damage in America’s retaliatory campaign. At the protests I attended, banners proclaimed, “Another World Is Possible,” a sentiment that has run like a thread through the anti–Iraq War protests, the Occupy Wall Street movement, and beyond.

A whole generation grew up protesting this war: Some of the children brought to those first marches in their strollers are now young activists in their 20s. These photographs, collected from five photographers who were operating across the country at the time, are evidence that opposing the Afghan war started as soon as the war did. They’re a reminder of that dark time, and a lesson for our future. 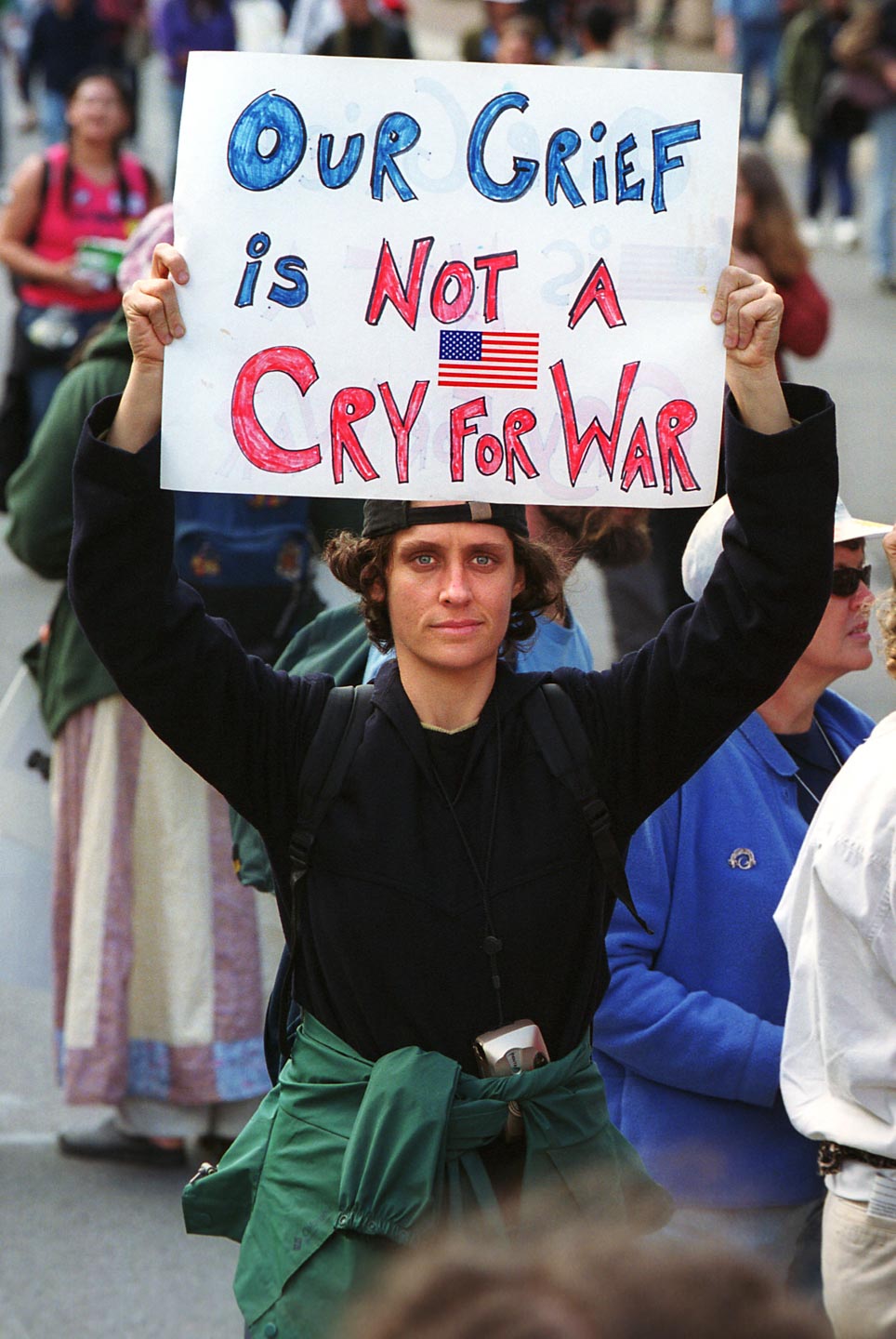 Thousands of demonstrators came to Washington, D.C., on September 29, 2001, to participate in a march to demand a peaceful resolution to the attacks on New York and Washington, and to stop racist attacks on Muslims and Arab-Americans. In this image, Jenny Scheinman of Brooklyn, N.Y., marches down Pennsylvania Avenue. (Rick Reinhard) 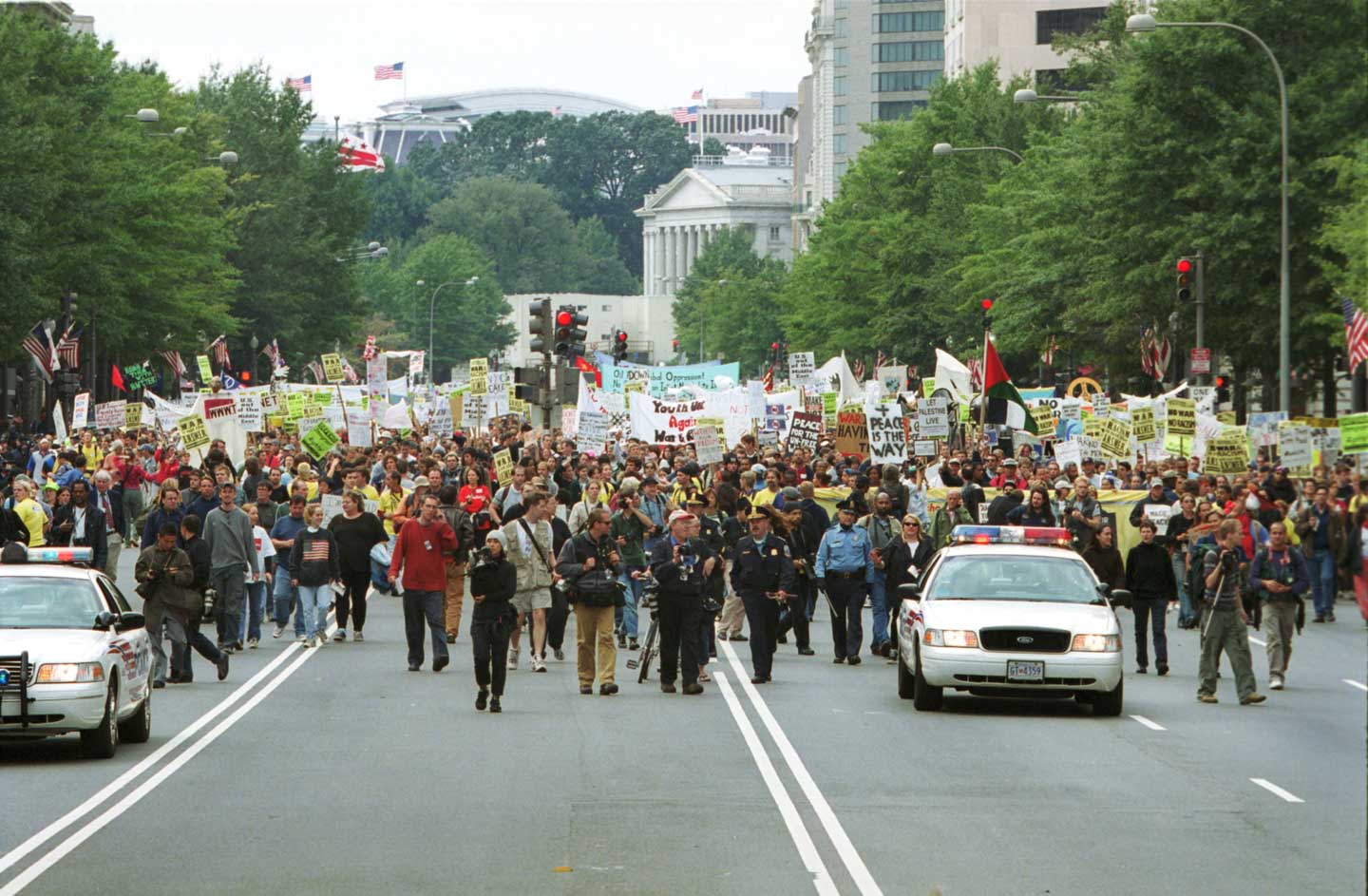 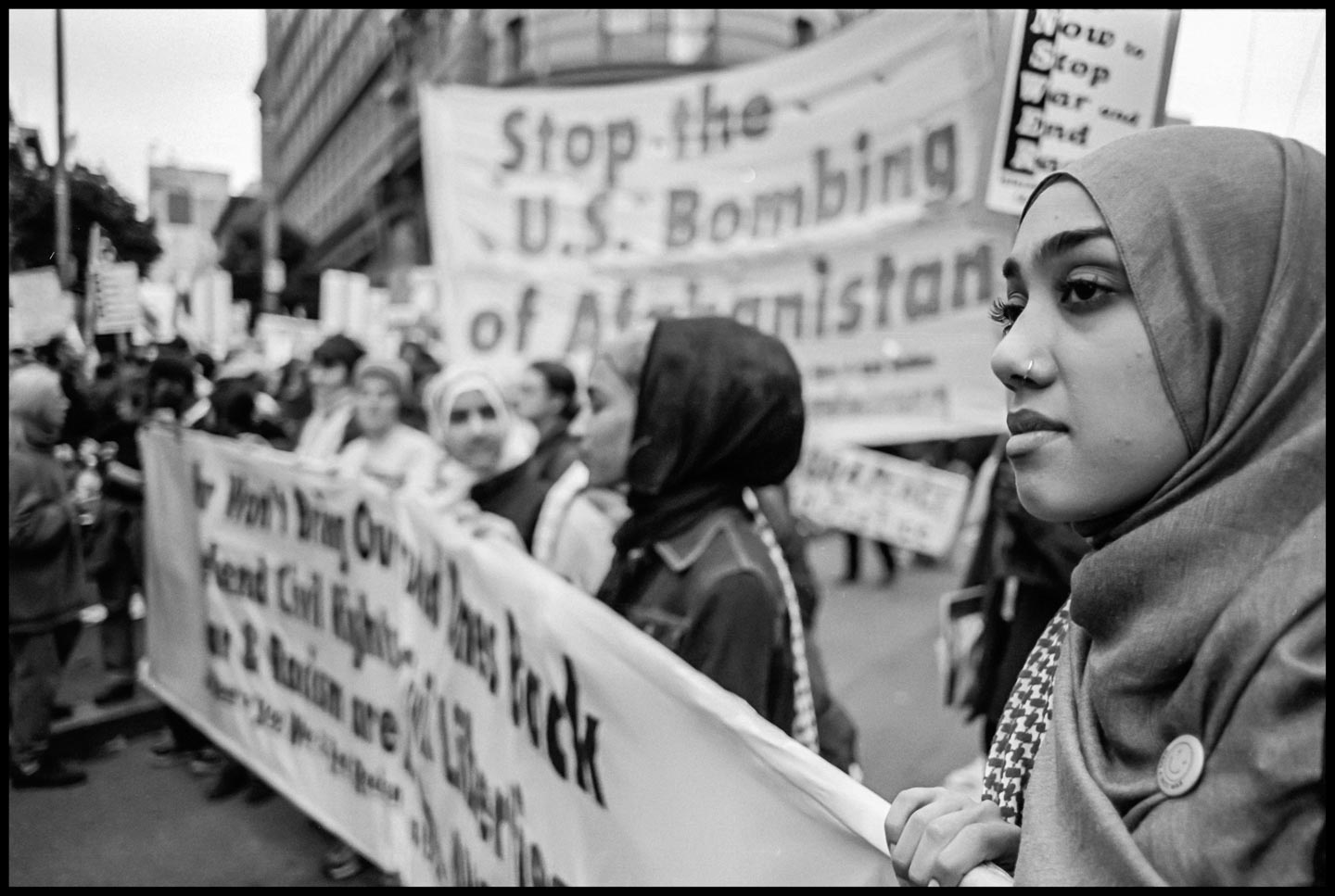 Marchers in San Francisco condemn the beginning of the bombing of Afghanistan, October 7, 2001. 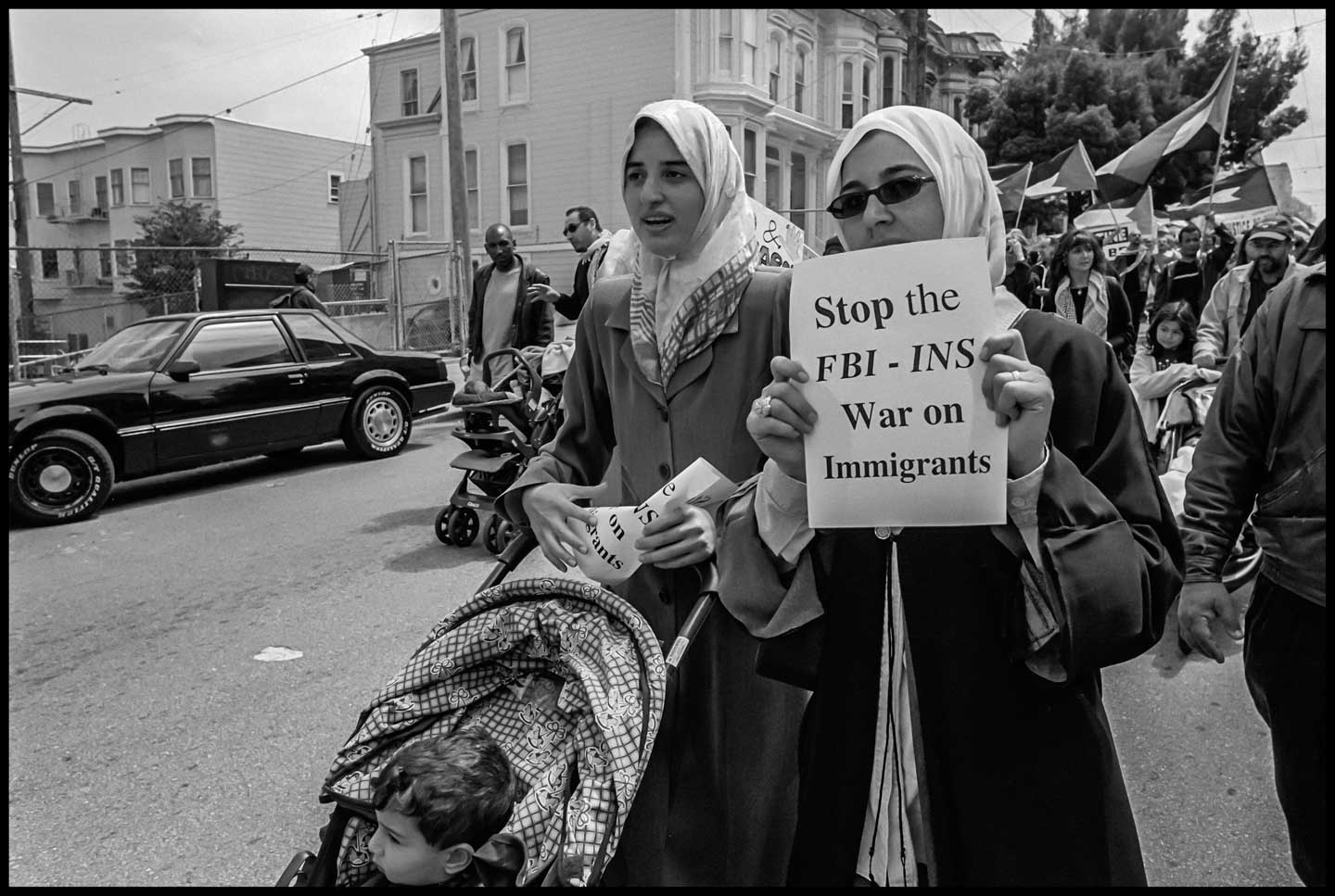 San Francisco marchers condemn the detention of Muslims in the wake of 9/11. October 7, 2001. (David Bacon) 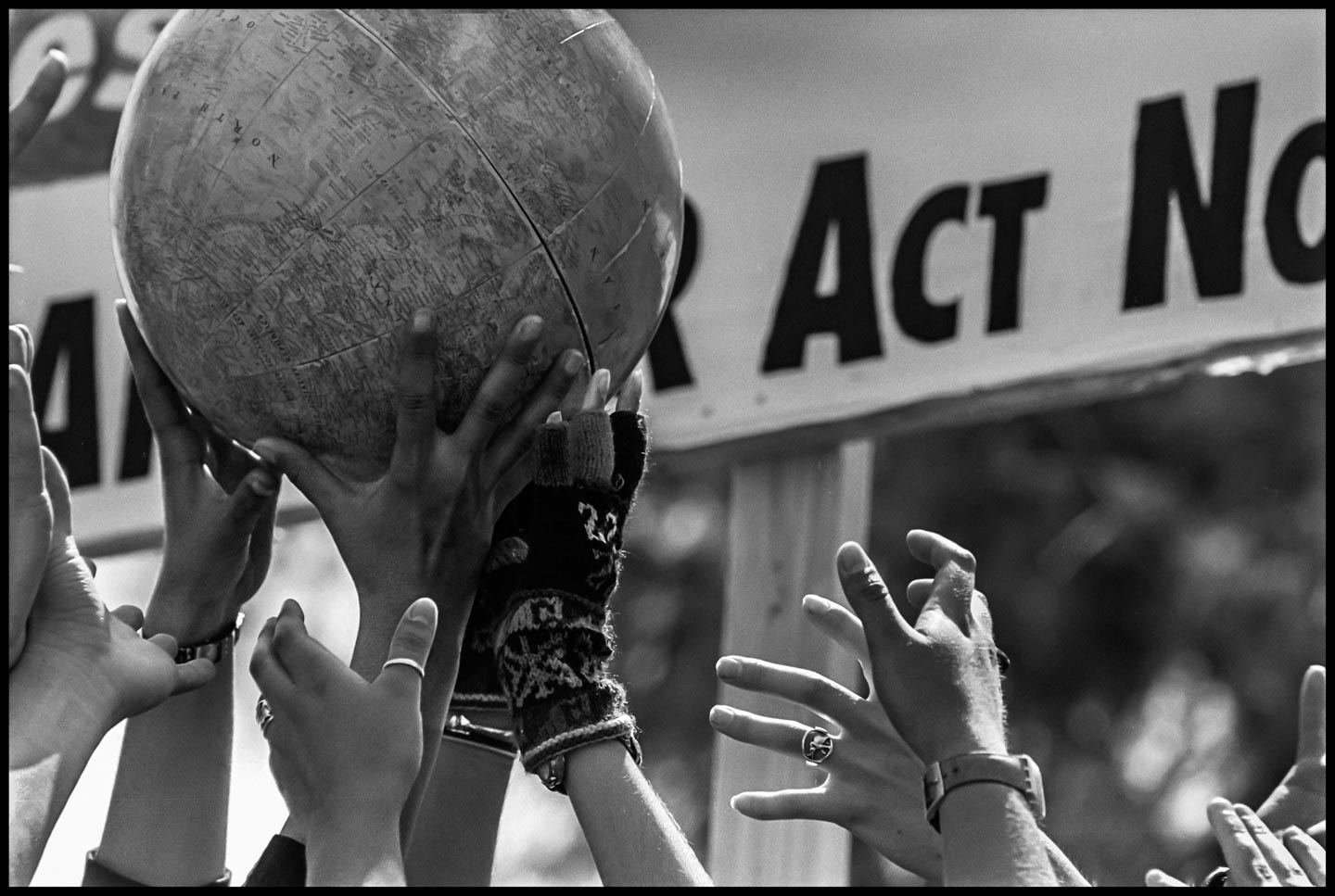 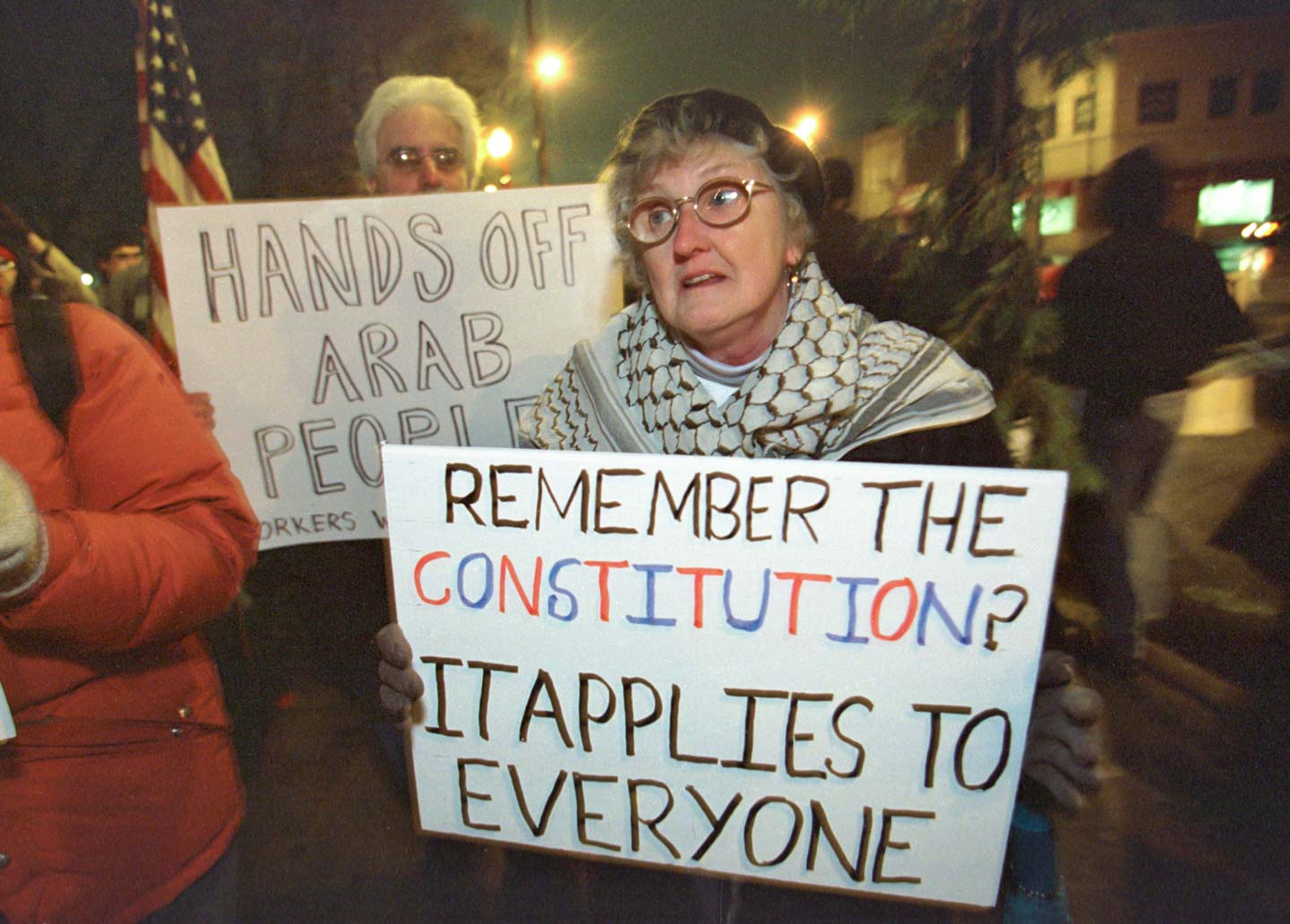 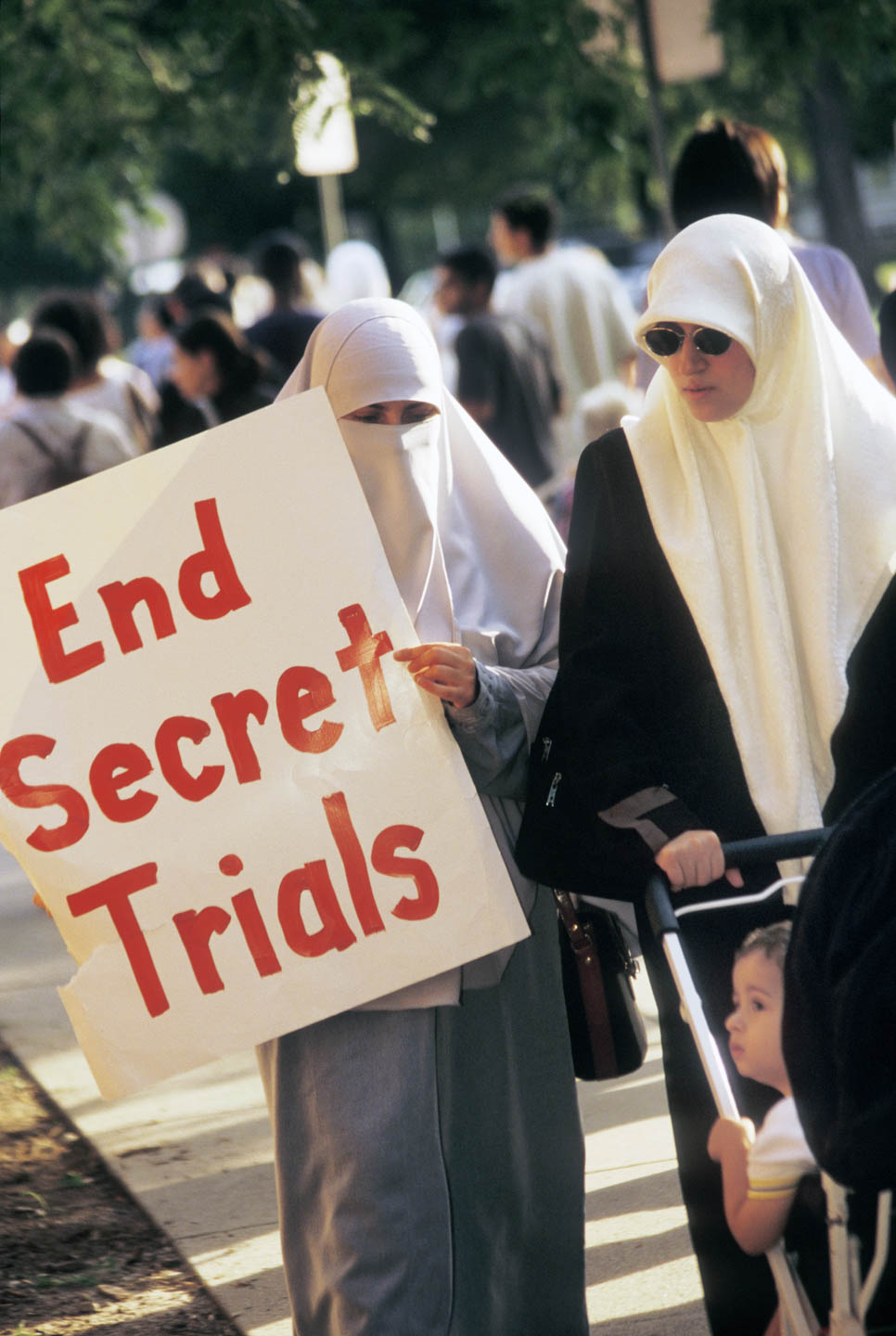 On August 26, 2002, about 100 supporters of Rabih Haddad, a Muslim clergyman jailed on a minor visa violation since December 2001, rallied outside Haddad’s jail cell hours after the US Appeals Court in Cincinnati ruled that the government cannot hold Haddad’s deportation hearings in secret. Haddad was one of about a thousand noncitizens arrested after September 11—many of them held in secret, denied access to lawyers, or subjected to secret legal proceedings. Monroe, Mich. (Jim West) 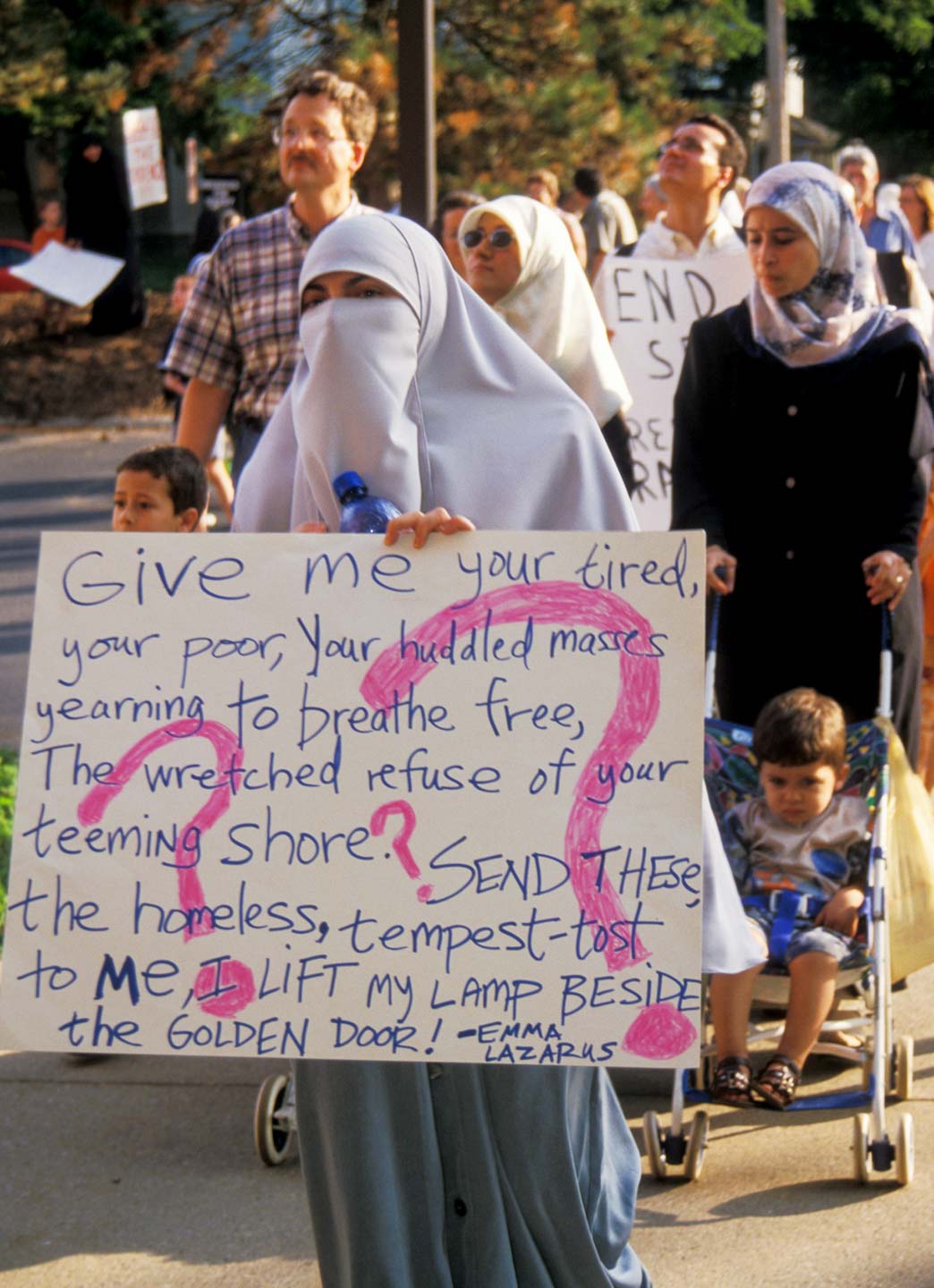 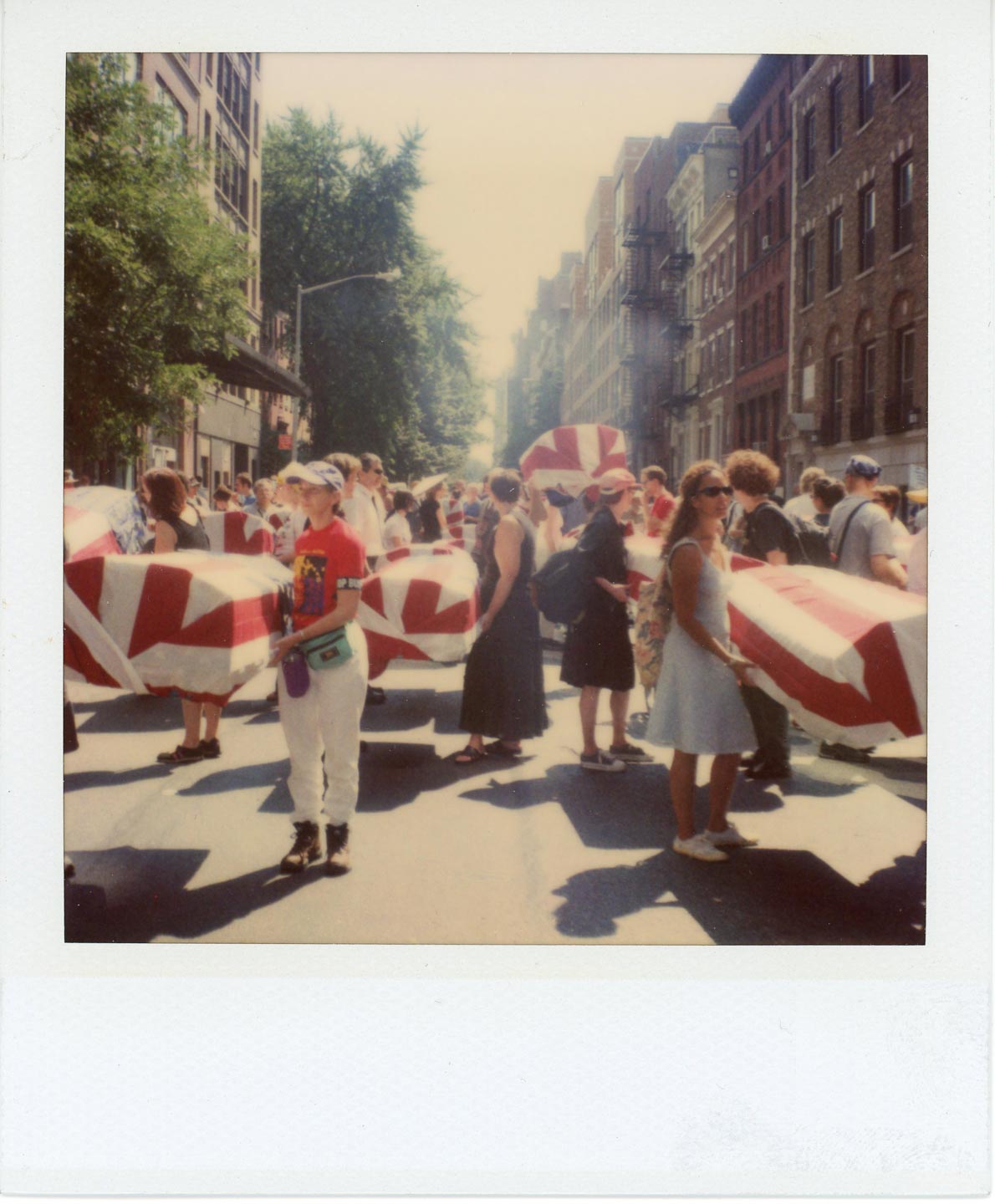 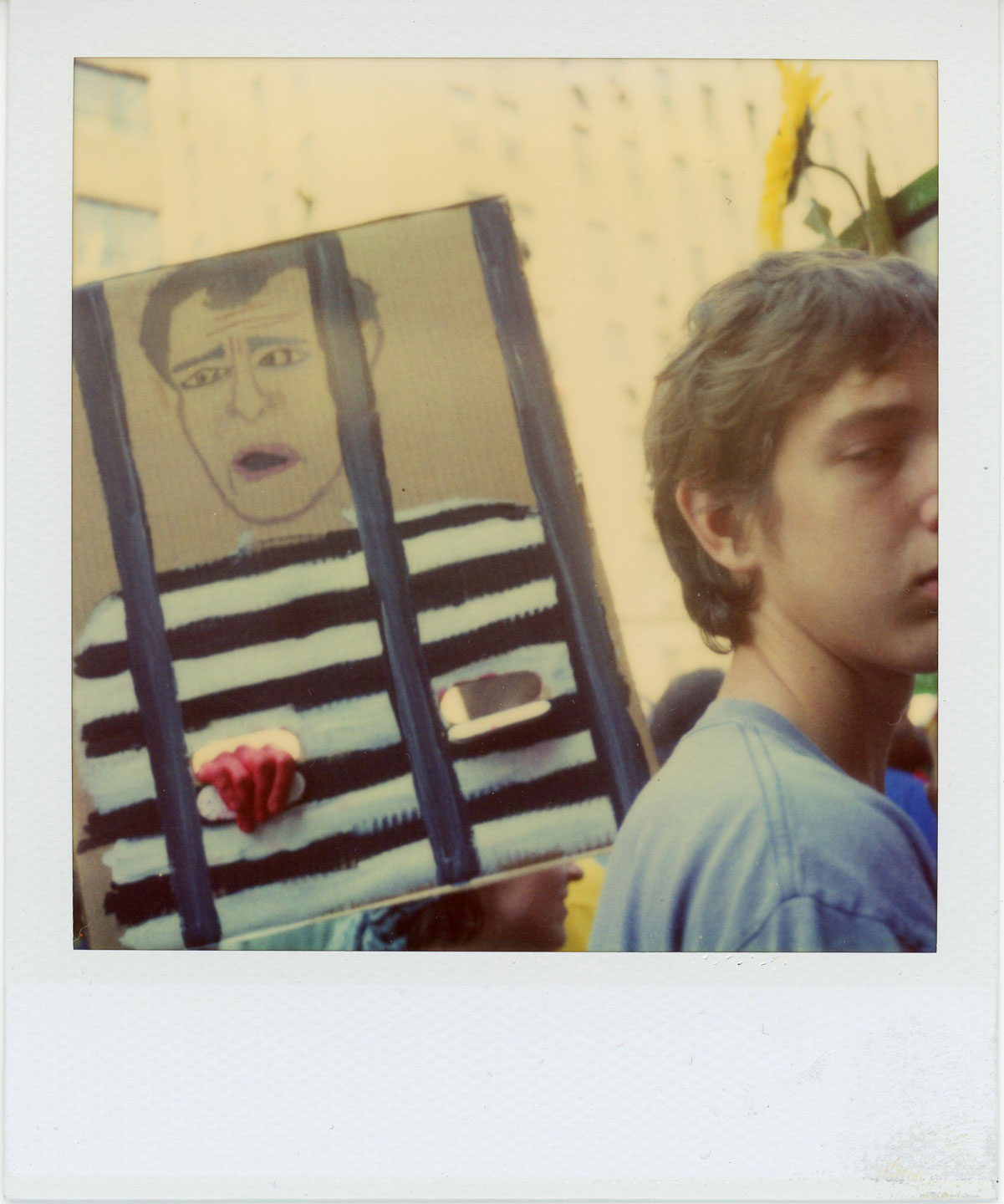 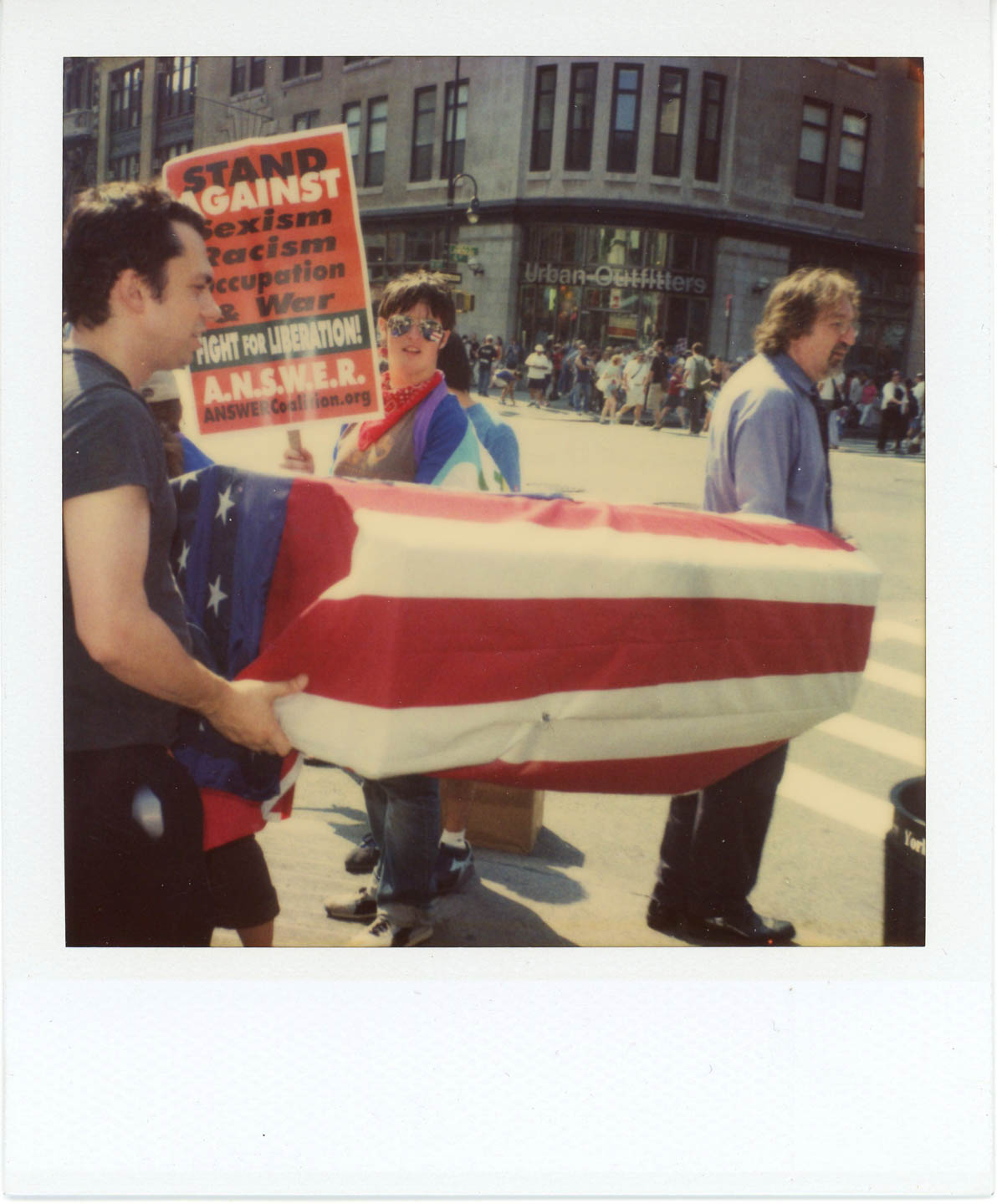 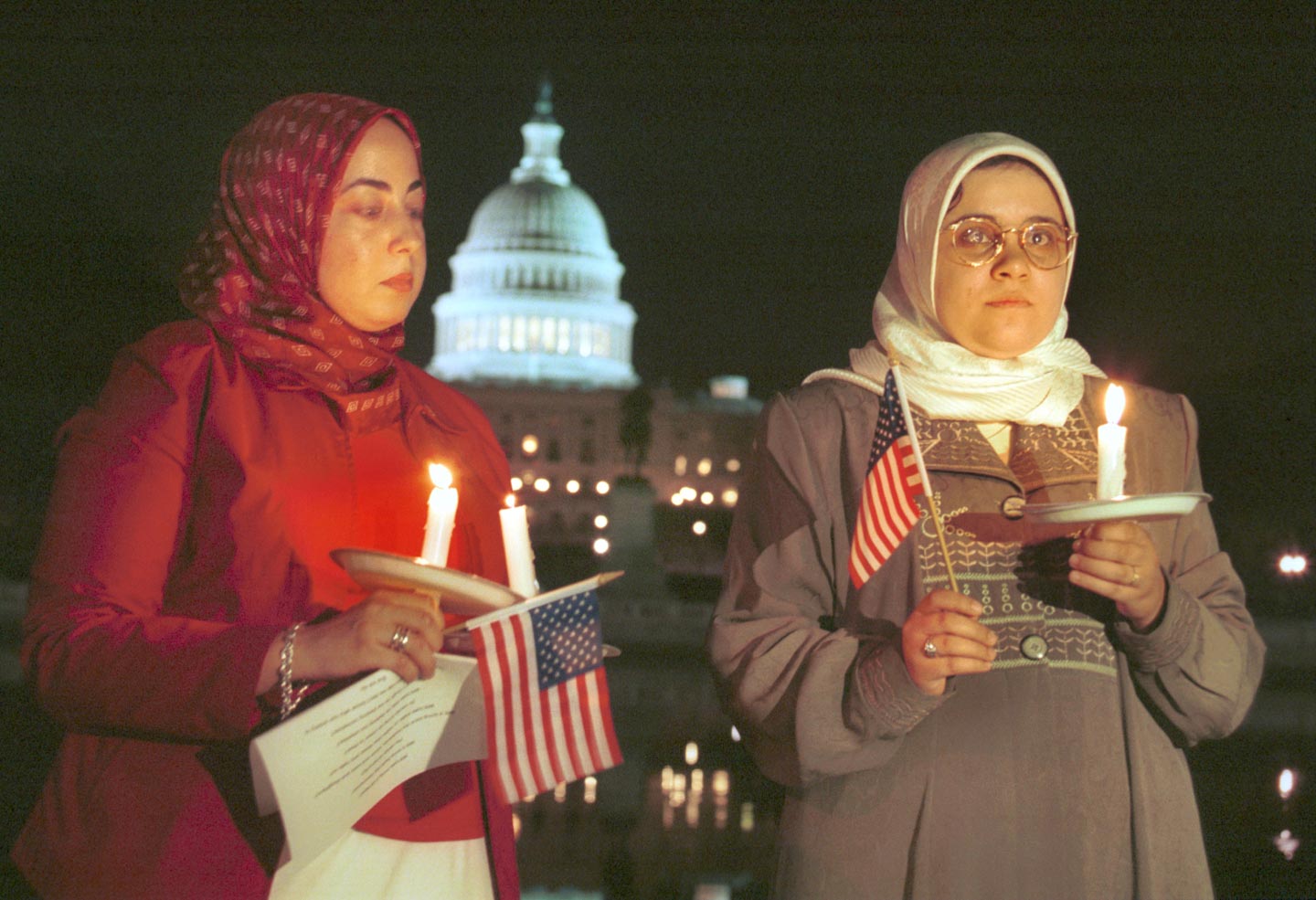 On September 10, 2002, the Council of American-Islamic Relations held a candlelight vigil on Washington’s Reflecting Pond to remember the losses of the 9/11 terror attacks. In this image, Nancy Serag, left, of CAIR, and Doaa Mustafa, a student from Egypt studying at Northern Virginia Community College. (Rick Reinhard) 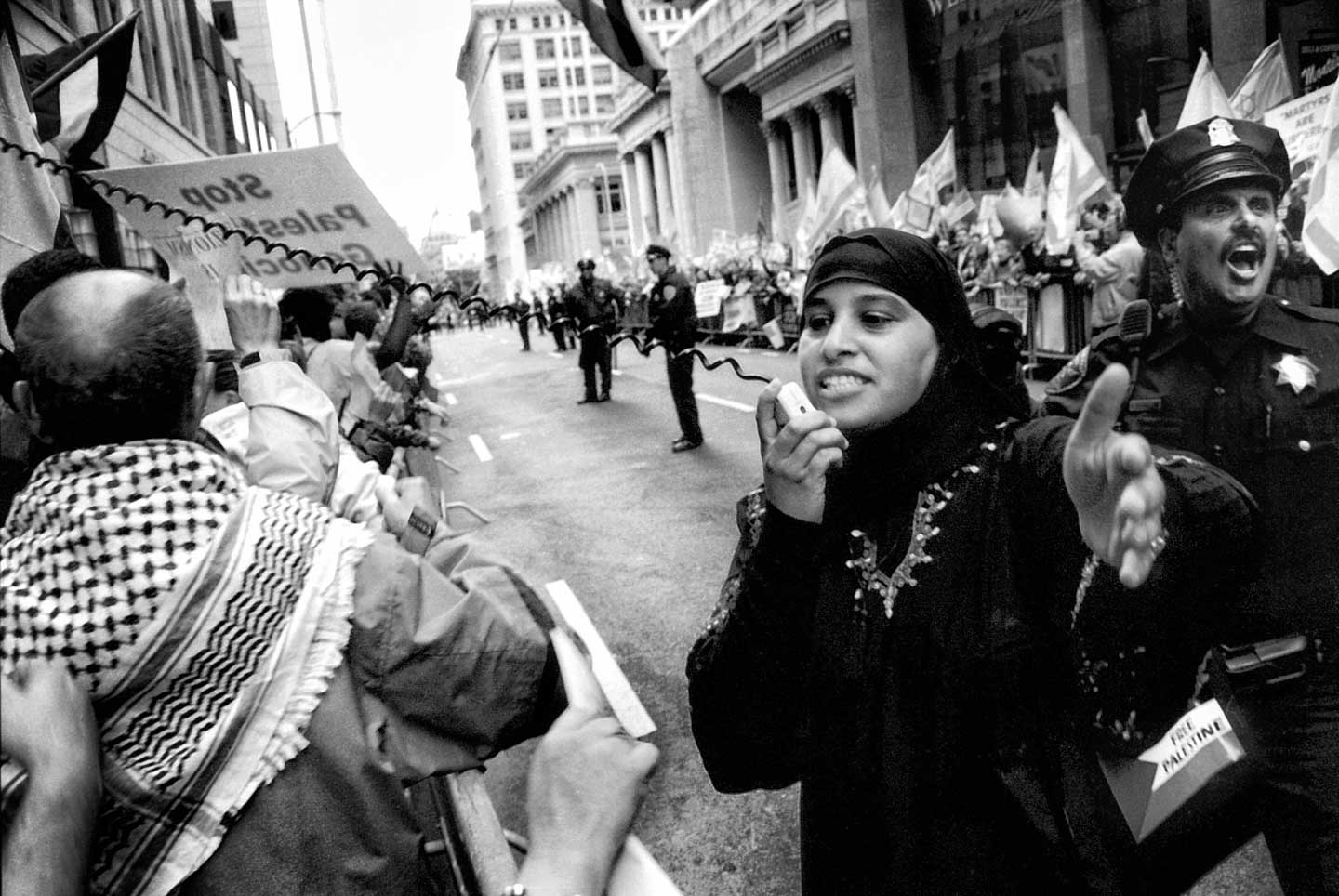 Protesters made links between the invasion of Afghanistan with American policy in the Middle East in general, like at this Free Palestine march in San Francisco’s Financial District, April 4, 2002. (Najib Joe Hakim) 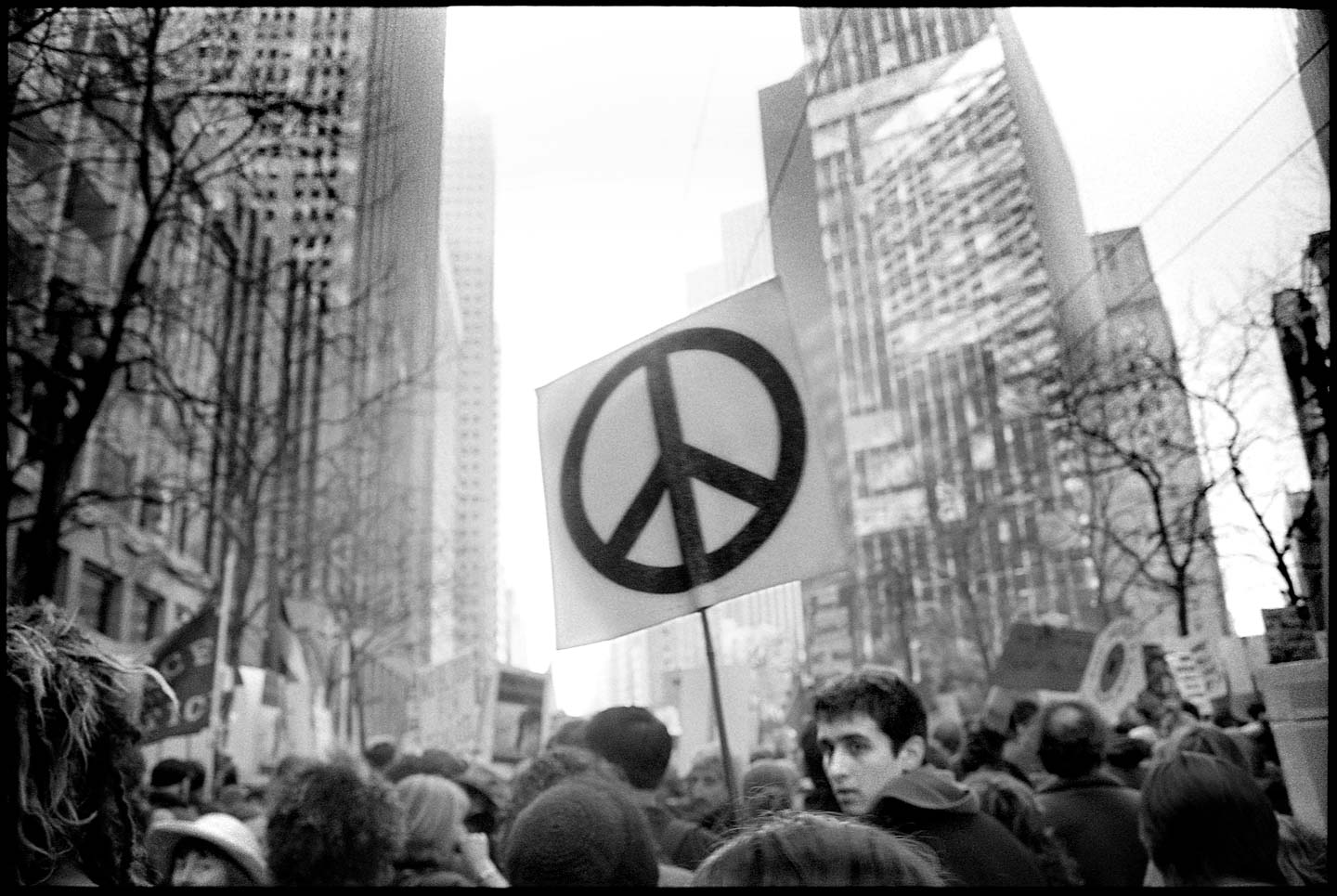 The fight against war continued when the Bush administration began agitating for the invasion of Iraq. In the largest anti-war demonstration in San Francisco since the 9/11 attacks, 150,000–200,000 peaceful protesters marched through downtown San Francisco on February 16, 2003, hoping to stop the Bush administration from continuing the war in Afghanistan and beginning one in Iraq. (Najib Joe Hakim)