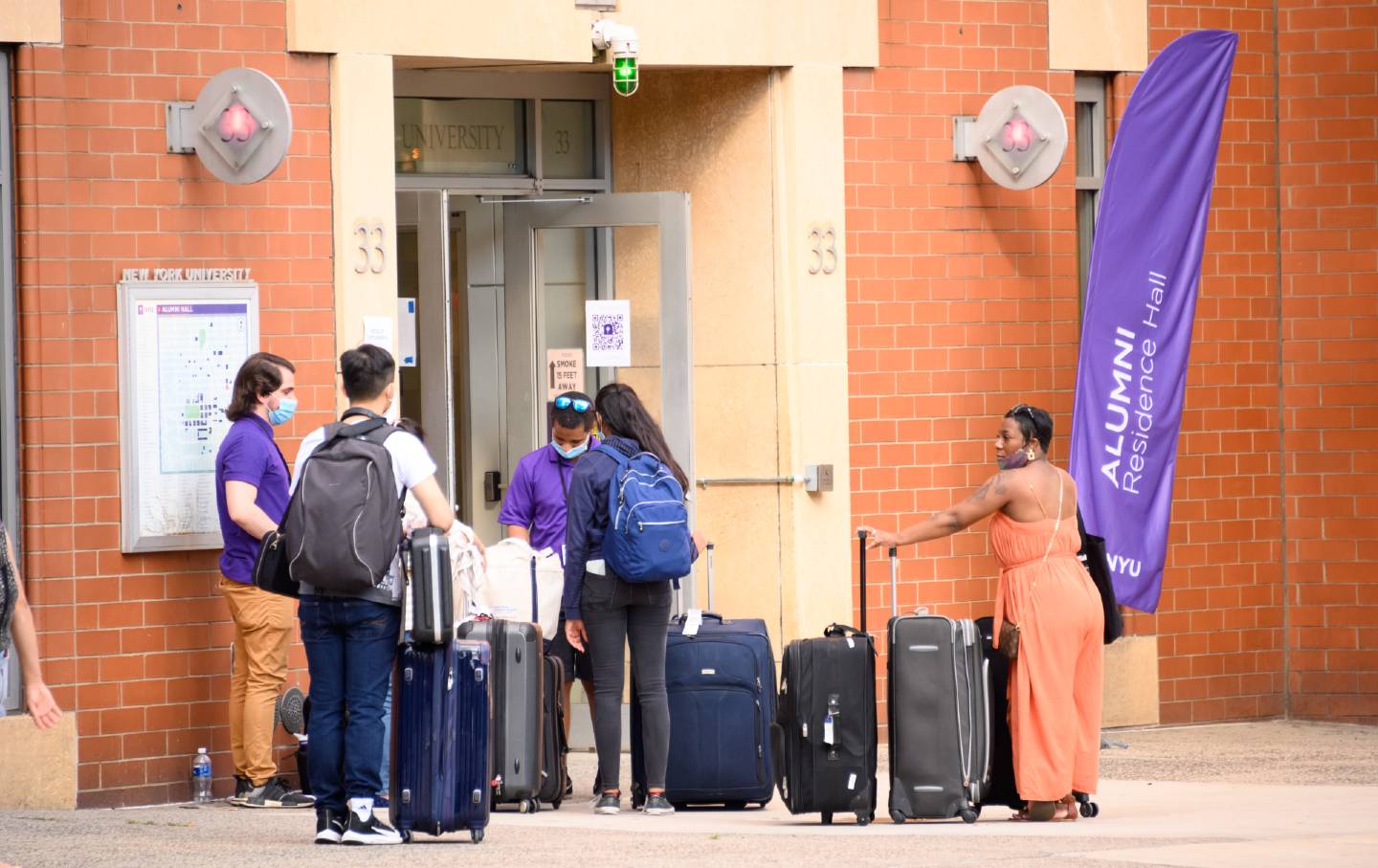 In July, close to a million international students in the United States learned how much can change in eight days. When the Trump administration released its short-lived immigration directive on July 6, proposing unprecedented legal restrictions on academic visa holders in the country, international students—both in the country and outside of it— were forced into action.

Fearing deportation, those in the country waited for updates from their schools and reconsidered travel plans. Those overseas followed the news from a spectrum of time zones, trying to make sense of their educational plans. Many, like Princeton University senior Joanna Zhang, saw the future of their homes being thrown into uncertainty, leaving them, as Zhang described, “distraught and freaked out.”

Sheltering at her boyfriend’s house in Austin, Tex., where she has been since Princeton sent students home in mid-March, Zhang learned that if she was unable to take in-person classes in the fall—which, under the proposed policy, she couldn’t do because Princeton’s campus would be closed to seniors—she would have to leave the country. With reasonably priced journeys back home to Australia taking a minimum of 40 hours, she was dismayed. “There’s definitely a sense of existential dread,” she told me in July. “The lack of agency in this sort of situation is very difficult to bear.”

The policy was reversed a week later, but not without leaving a lasting impact on international students across the world.

As the coronavirus continues to spread, its tangible impacts on global movement—such as travel restrictions and consulate closures—continue to trouble the nation’s international students as they have since March. What has changed in the last few months, in large part due to the US Immigration and Customs Enforcement policy, is the unveiling of an important but difficult question for institutions and individuals alike: What value do international students bring to the US education system, and what do our answers say about the country and the people who choose to make a life here?

Even before the July policy, the Trump administration was rolling out new visa restrictions that significantly impacted international students, and more are being proposed. In June, Trump suspended the issuance of new work visas, including H-1B and J-1 visas, in a move that left many researchers stranded or forced to leave their jobs. In early September, Trump revoked the visas of more than 1,000 Chinese students on the grounds that the State Department had deemed them as “high risk” for alleged ties to the Chinese military, although some of these ties proved to be dubious. Most recently, it has proposed new rules limiting international students’ time spent in English language training, how often a student can change degree programs, and the validity of an academic visa—which, until now, was indefinite as long as a student was enrolled in a US school—to four years, shorter than the average PhD program.

The effect of these rolling announcements— with some that stick and others that don’t—has put international students in a state of constant anxiety, fearing their futures could change at any moment.

“My heart is racing just putting myself back in time,” tweeted Ana Maria Porras, an incoming assistant professor in the Department of Biomedical Engineering at the University of Florida, on September 25. Originally from Bucaramanga, Colombia, she obtained her bachelor’s, master’s and doctorate degrees in the United States over the past 13 years. “What would I have done had these rules been in effect. Would I have come to the US? Would I have stayed for graduate school? Did I choose correctly in deciding to obtain a faculty position here?”

Porras is not alone in questioning whether, for international students, it is worthwhile pursuing a life in the country at all. “Lately, I’ve been having a lot of mixed feelings about the United States,” said Hannah Guo, an incoming international student at Pomona College. Calling from her bedroom in Hong Kong in July, she told me that she’d decided to pursue a gap year when Pomona announced a fully virtual fall semester. (Though the July policy was rescinded for students who already had their visas, the same did not extend to new students—such as international freshmen like Guo—who were unable to obtain the required documents to enter the country.)

Princeton senior Zhang, who has spent the last seven years in the United States, has experienced a similar disappointment. She recalled a winter day from 2013, when she sat at a seminar table at Phillips Exeter Academy discussing ambition and the idea of home with 12 classmates. Leaning back in her chair and looking out the window, she listened as some of her American classmates—chiefly those from major metropolitan areas such as New York City—talked about their dreams and the places they lived overlapped.

“And I just thought,” Zhang said, “I don’t think I’ll ever live at home again.” Knowing she may not be able to stay in the United States after graduation, however, she has begun looking into other options, including the United Kingdom.

As some predict a drop in international student enrollment due to the aftershocks of the pandemic, a looming uncertainty hovers over the country’s educational institutions. Despite all their outreach to foreign students, what if these students no longer come—and if they don’t, what will American campuses look like in the future?

“They are not only wanted here, but needed,” Kylee Marshall, an adjunct faculty member at Brigham Young University, told me back in July when the ICE policy was still on the table. “They enrich the experience that other students have—and that’s what’s been on my mind the most.”

When the ICE policy was first announced, Marshall was one of dozens of faculty members at BYU who opened their courses to international students needing an in-person class to legally remain in the country. Given the multicultural nature of her seminar, which explores topics of “ethnicity, race and power” by studying family structures around the world, she thought it “made a lot of sense” for her to offer room for international students.

“It’s been really cool to watch people rally together to make this work,” she added. Guo, miles away in Hong Kong, had alluded to the same, describing virtual meet-and-greets she attended all summer with other Pomona freshmen. “I think the collective trouble increases the sense of camaraderie among us,” she said.

During the eight days in which international students clamored to find a solution, many of their domestic classmates stepped up to advocate for their friends through social media, e-mail listservs and petitions on major platforms across the internet. “Class-swap” initiatives—in which domestic students volunteered to give their in-person class seats to their international peers—circulated online; one such Google sheet attracted contributors from 56 schools before becoming a website within days.

The rapid mobilization came as no surprise in a time when, for many students, collective action is best organized through the Internet—especially in a moment when schools across the nation are reckoning with how deep-rooted issues, such as anti-Black racism, impact their students in disproportionate ways.

While talking to undergraduates from various schools, I learned that much of this solidarity stems from meaningful personal experiences. Daniel Li, a junior at Carnegie Mellon University, wrote to me about the summer he worked in a lab as a lone freshman. Making new friends was tough, he said, until he met a PhD student from India whose kindness and friendship completely transformed Daniel’s summer.

“Rohan was the one who made me feel welcome,” Li wrote. “He is certainly a valued part of my community and story.” Remembering Rohan’s contribution to his college life especially in a time of “shared uncertainty,” he added, “I want to support our international peers. None of our communities would be the same without them.”

Sean Zatz, a sophomore at Princeton, believes his friendship with a Chinese classmate, Tony, helped him grow “into a more understanding and mature person.” Their classmate, Austin Davis, shared similar experiences with his Portuguese roommate, Edoardo, whose “unfailing positivity and deep intellectual convictions” helped make his freshman year “as [good] as it could be.”

The sentiment goes both ways. Despite not being able to meet them in person until next year, Guo said that she has enjoyed meeting her other classmates—both domestic and international—through group chats and Zoom calls. “They’re such a great group of people,” she said, “and so diverse.”

Yet despite how kind her classmates have been, articles and petitions that defend the enrollment of international students by emphasizing their economic contributions make her second-guess how welcoming her future home will be.

International students’ economic impact is a convincing argument to make in favor of letting them stay: According to a report by the Association of International Educators, these students contributed $41 billion to the US economy in 2018. It’s a sum that, during a time of economic crisis, the country can’t afford to lose.

Still, it’s a narrative that unfairly reduces international students to potential profit. On July 9, an assistant professor in computer science at Bucknell University, Chris Dancy, joined a rising chorus on social media by raising a simple point. “Maybe we should focus on treating these students as humans,” he tweeted, “instead of economic entities.”

In an e-mail, Dancy wrote that the emphasis on economic value “dehumanizes” students, drawing an analogy with how concepts like tokenism have painted one-dimensional portraits of minority students. Although he is a US citizen, he wrote that for him, the issue feels personal: Not only has he taught and done research with international scholars in the past, but, as a first-generation college graduate who was “one of a handful” of Black students in his field, he has witnessed how sweeping generalizations can cheapen the complexity of students’ experiences within higher education.

Many international students do pay full tuition, which is often higher for nonresident and out-of-state students. Yet this population also includes those who receive substantial grants from their home governments or work multiple campus jobs to support their life overseas. Some even receive full financial aid, most often at wealthier, private institutions such as Harvard and Massachusetts Institute of Technology, the two schools that sued the government over the now-rescinded ICE policy from July. (The case was resolved before it was even discussed in court.)

But as the 2020 election approaches, accompanied by a growing wave of changes in immigration policy, the nation’s international students—many of whom are now unsure where to go next—have much greater anxieties in mind. In light of the emotional and human costs of this uncertainty, the economics and numbers of the narrative seem beside the point.