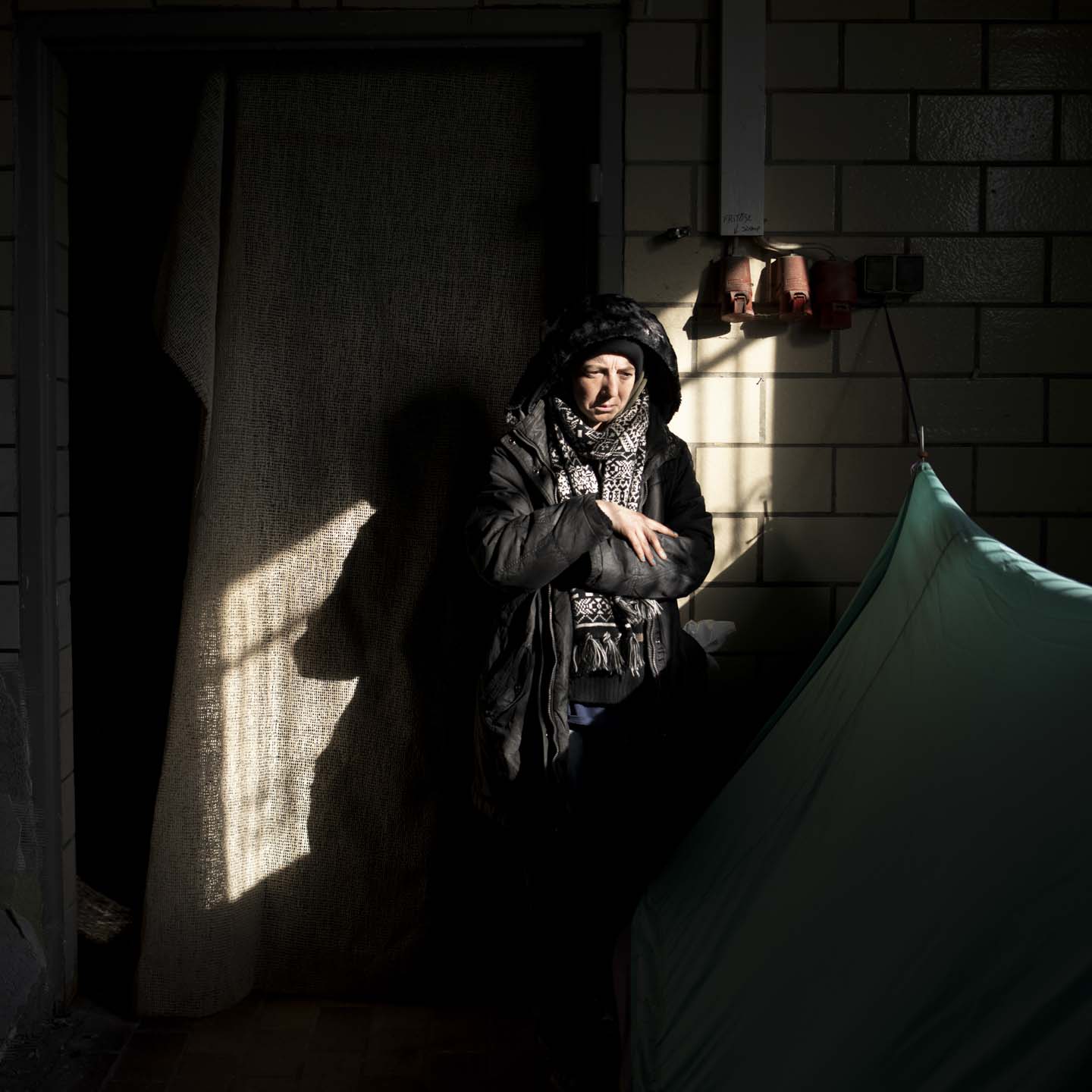 Miriam next to her tent in the abandoned döner kebab factory she has been living in. (Johanna Maria Fritz / Ostkreuz)

Berlin—Working as a photojournalist, I am usually at my home in Berlin for only part of the year—the rest of the time I’m in far-flung countries, documenting life on the ground for German and other publications. In March, as the coronavirus began making devastating inroads in Europe, I was on assignment in Iraq—I caught the last plane out of Erbil before travel restrictions were put in place. Now, like all my neighbors, I’m stuck here in the former East Berlin neighborhood of Friedrichshain. As I shelter in place, my local surroundings have become a new place to explore.

I’ve been living in my current apartment since December. It’s in a cheap neighborhood, situated in a ring of high, concrete housing blocks. A stone’s throw away is an old, abandoned doner kebab factory, where a group of people without traditional housing have been living, some of them for many years. As the German economy ground to a halt, these people were left without any stable income or any help from the authorities to get through this crisis. So I, along with my roommate who works in an emergency shelter for women, reached out to the people living in the factory, asking them what they needed to weather this crisis, how we could help. We ended up opening our bathroom to two of the women living in the factory, and learned a lot about the challenges facing these people right now. 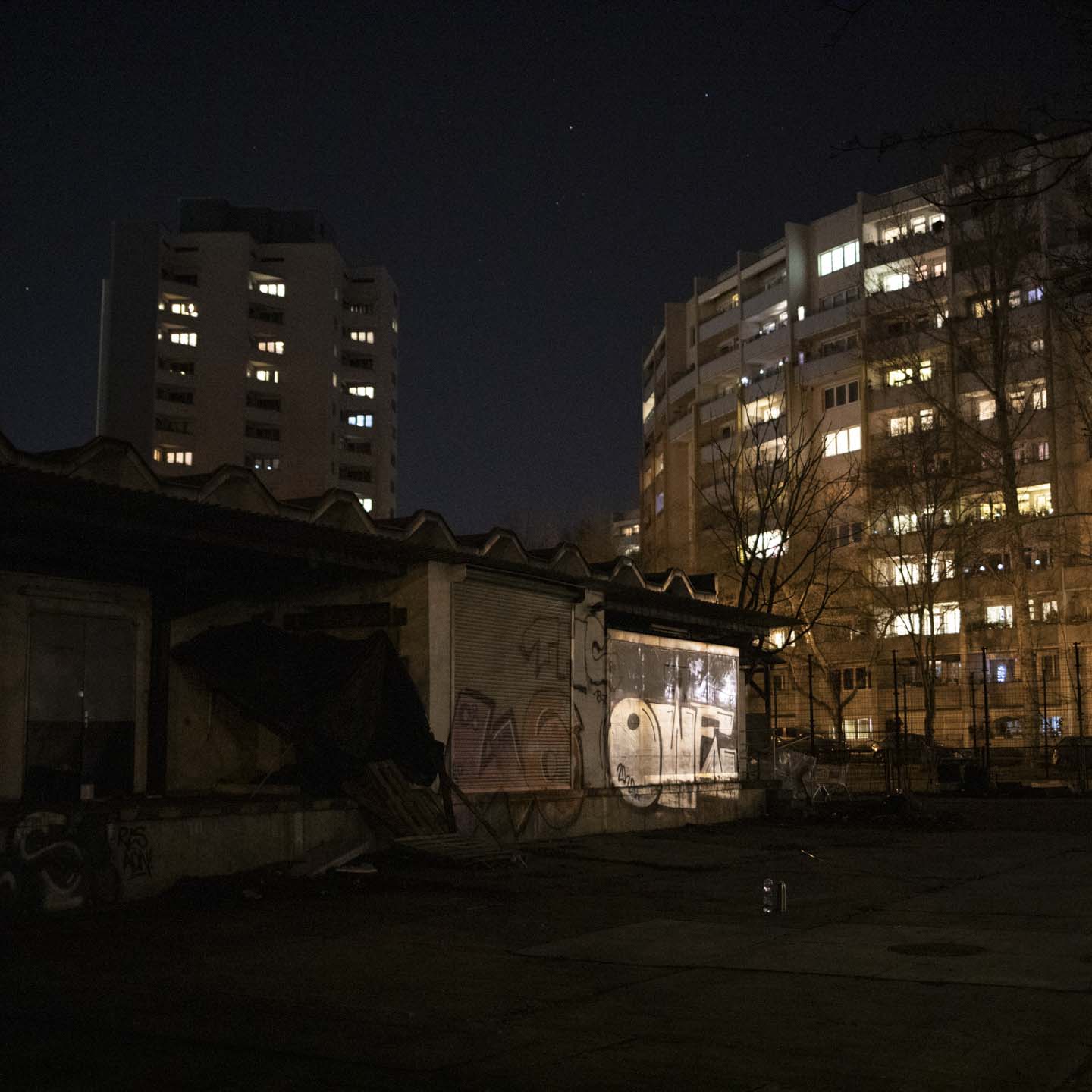 The doner kebab factory from the outside. (Johanna Maria Fritz / Ostkreuz) 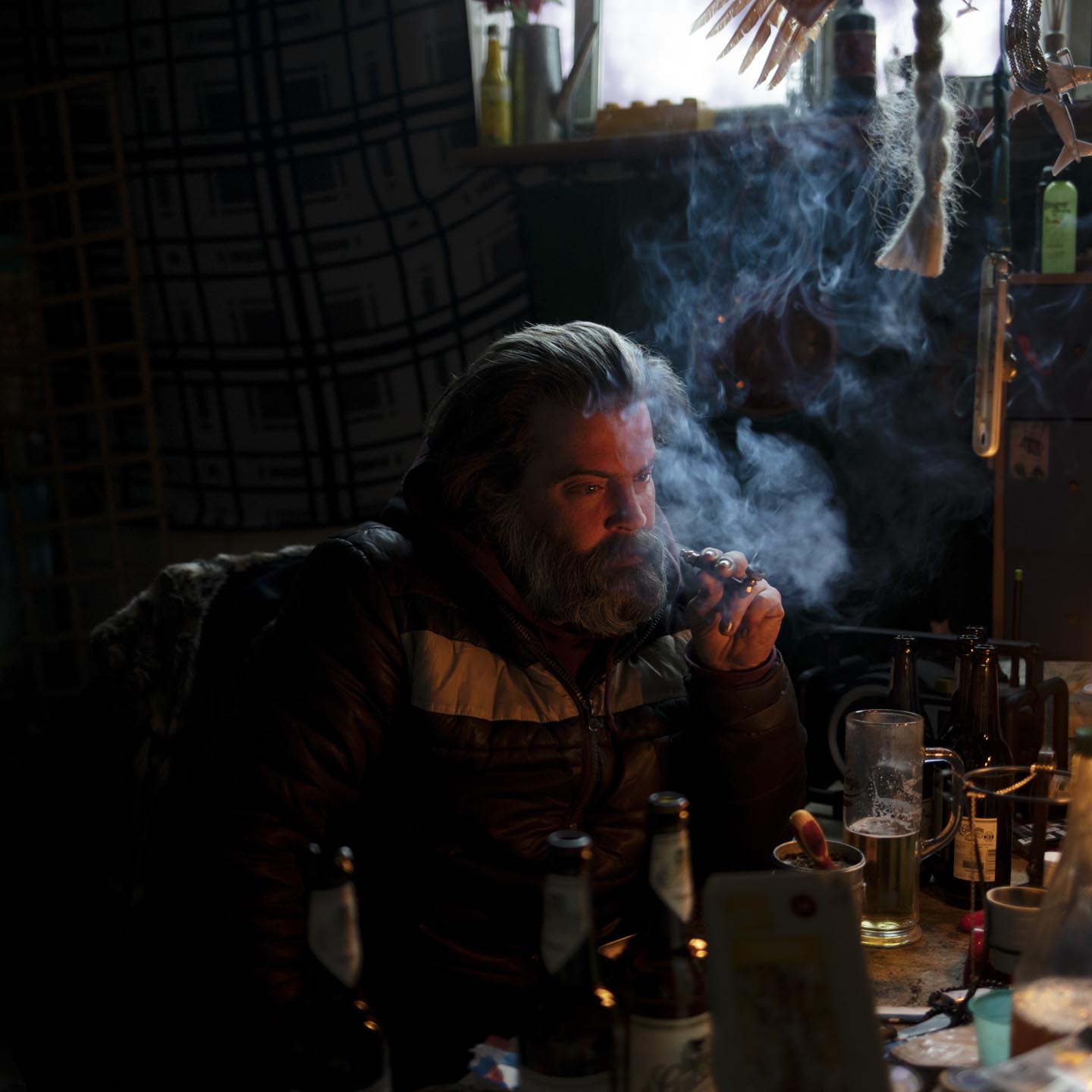 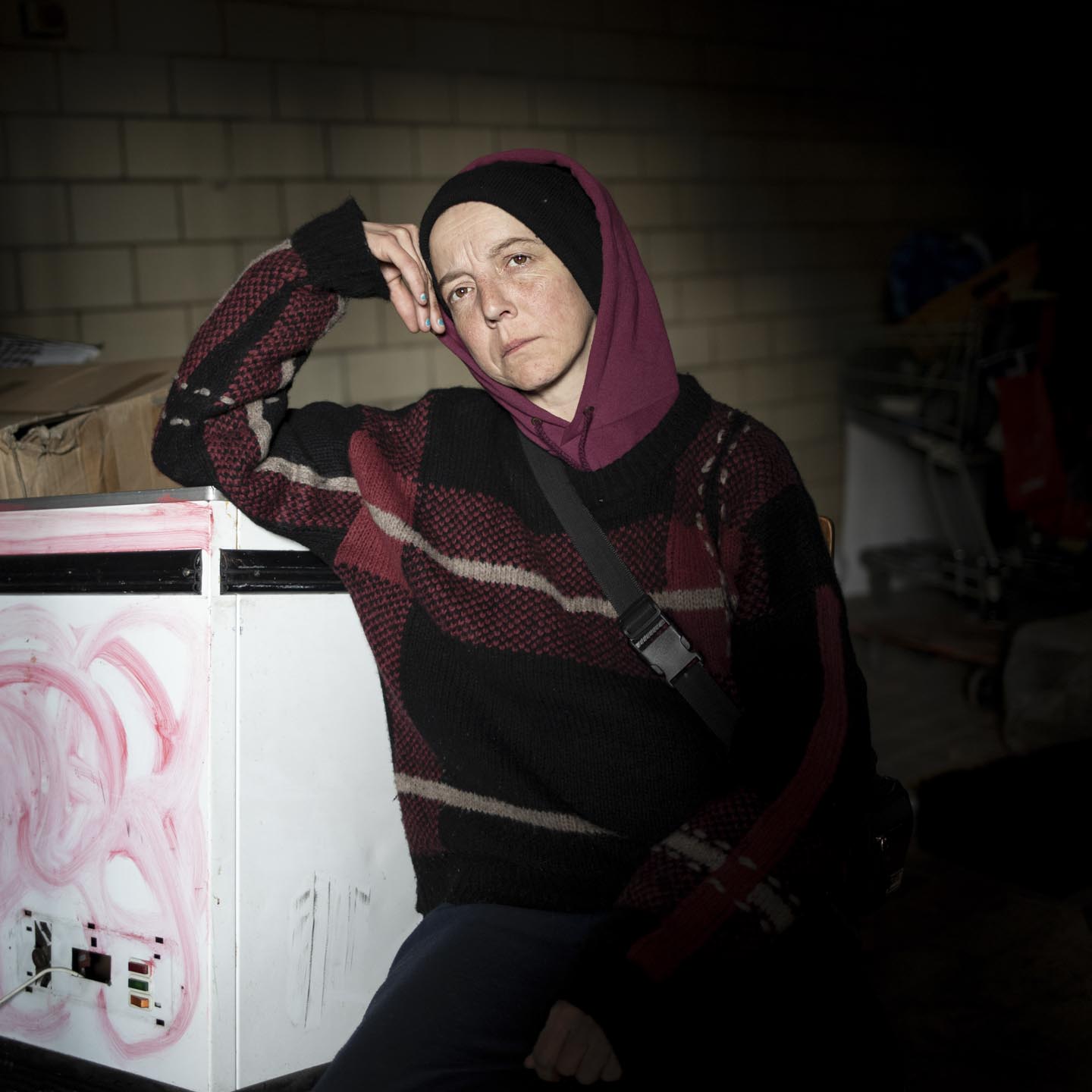 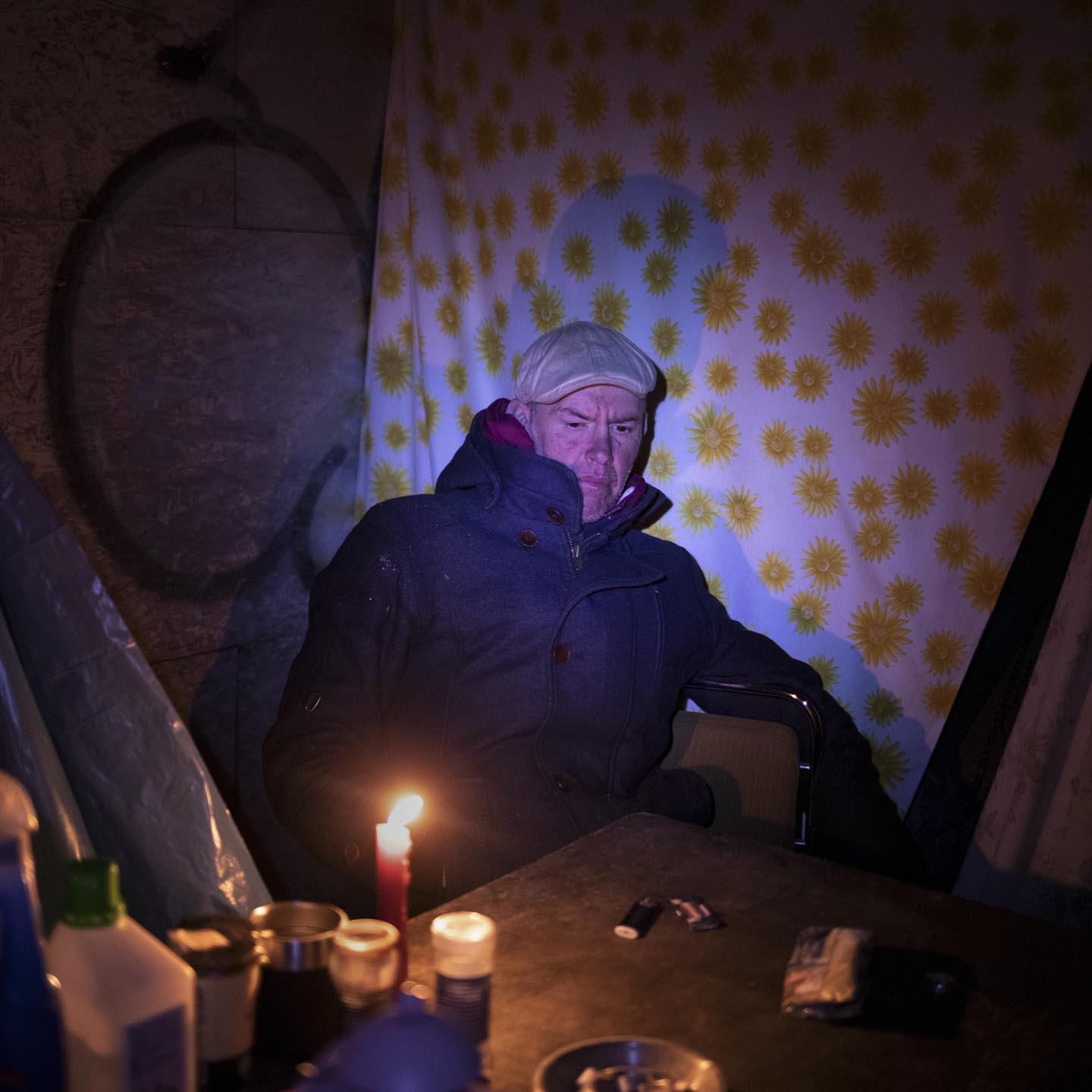 Thomas at the table in front of his bed in the factory. (Johanna Maria Fritz / Ostkreuz)

There are an estimated 6,000–10,000 homeless people living in Berlin, a figure that has risen steadily in recent years. The assistance offered by the government and nonprofits can’t accommodate the diverse and long-term needs of this community, and shelters with Internet access, washrooms, and access to medical care are hard to come by—even more so for those with disabilities, mental illness, and pets. 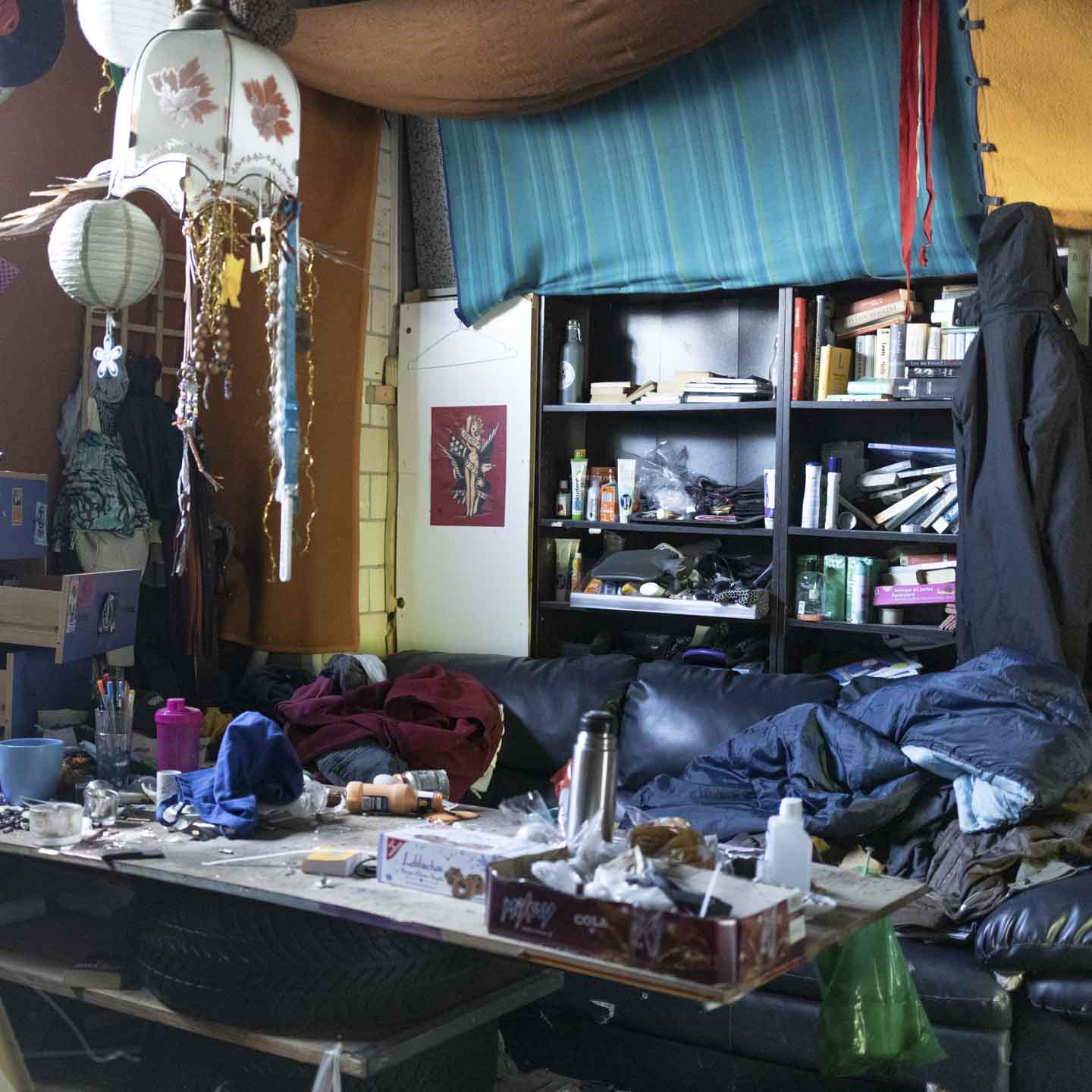 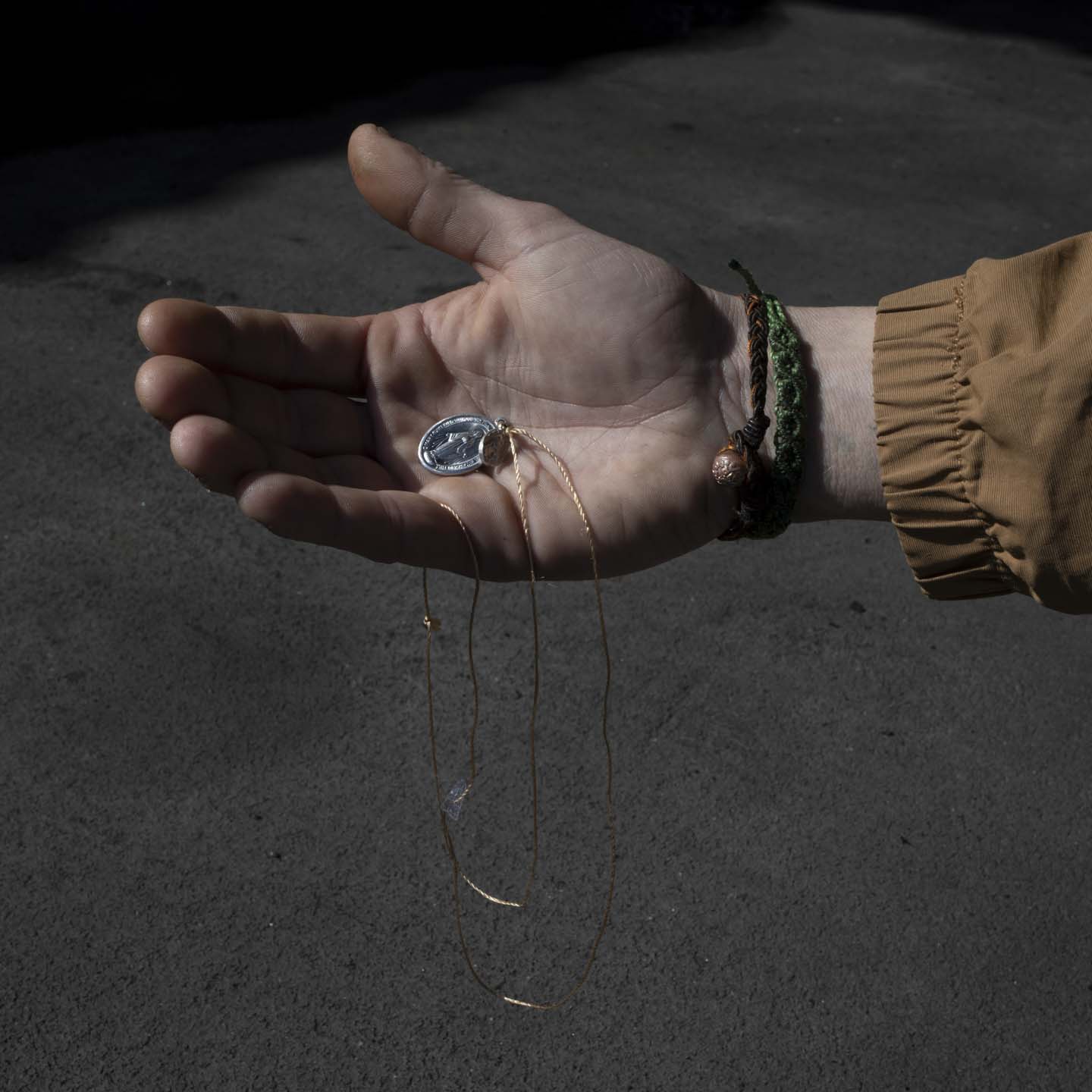 Sebastian shows the lucky charm that he received from a church as a gift. (Johanna Maria Fritz / Ostkreuz)

While Berlin is better positioned than other Eastern European cities to serve homeless populations, there’s not enough being done to combat the actual root causes of homelessness. And while the city reckons with the coronavirus, services are either on hold or severely reduced. The shelter where my roommate works, for example, is typically open only in winter, and was housing only the women who had already been staying there in the week before the coronavirus outbreak—it’s now closed. Centers for distributing food and providing showers are largely closed, and, amid a pandemic in which cleanliness is crucially important, there are only two places in the city where the homeless can wash themselves. Benjamin, one of the men living in the factory, told me, “For us homeless people, the most important thing is to wash. Right now we need places where we can take a shower.”

The deserted East Side Gallery, left, and Alexanderplatz, right, two spots in the city that are usually bustling with people. (Johanna Maria Fritz / Ostkreuz)

Like in other cities, many homeless people here earn their money by collecting bottles: In Germany you can receive 25 cents per plastic bottle and 15 for glass at a supermarket. But with the parks and plazas empty of their usual crowds, there are no bottles to be found. There is no money for food, let alone alcohol and drugs. With many homeless people suffering from alcohol or drug dependencies, this sudden cutoff can be life-threatening. 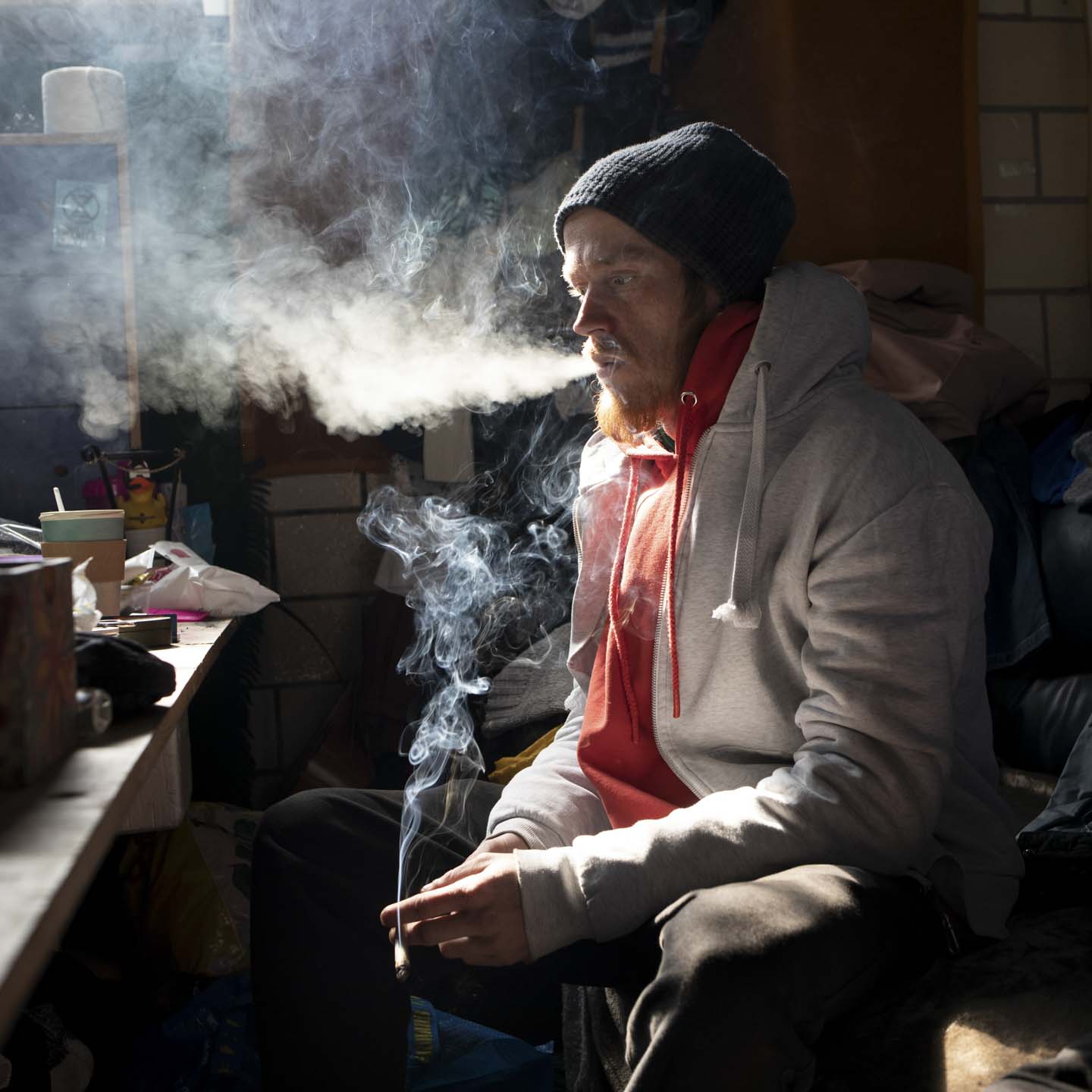 Sebastian sits on the sofa in the factory and smokes. (Johanna Maria Fritz / Ostkreuz) 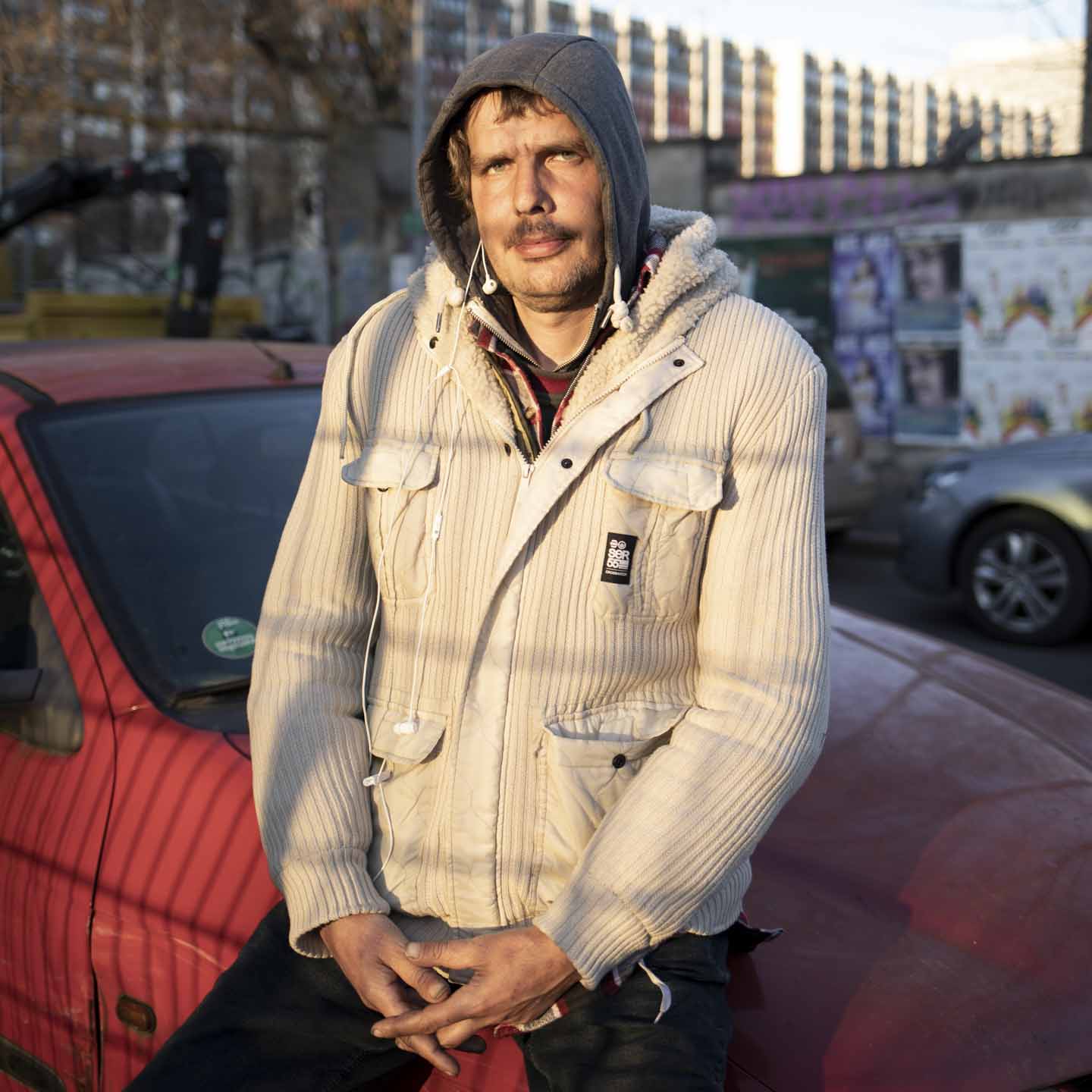 Hansi sitting on a car in front of the factory. (Johanna Maria Fritz / Ostkreuz) 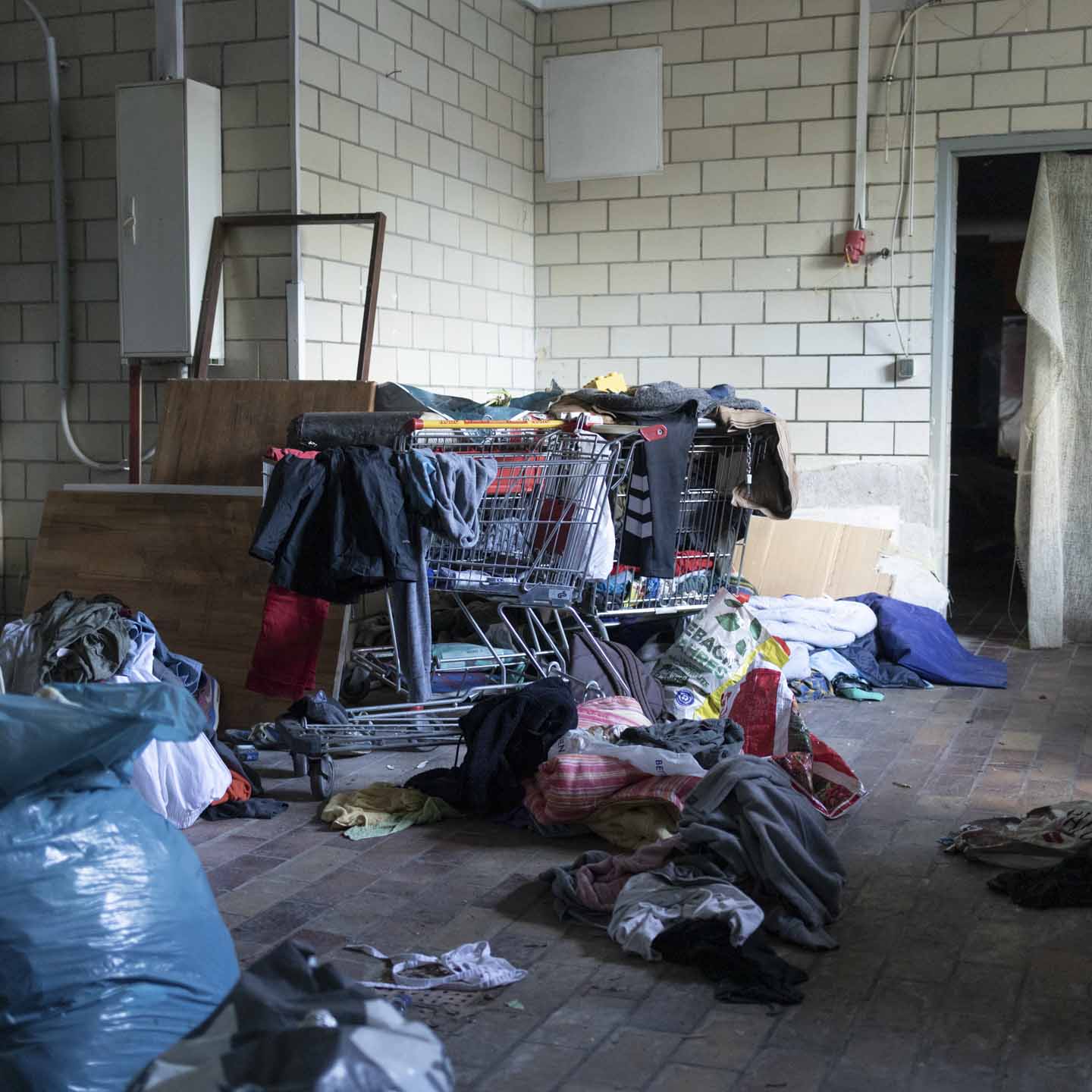 After the police cleared out the factory. (Johanna Maria Fritz / Ostkreuz) 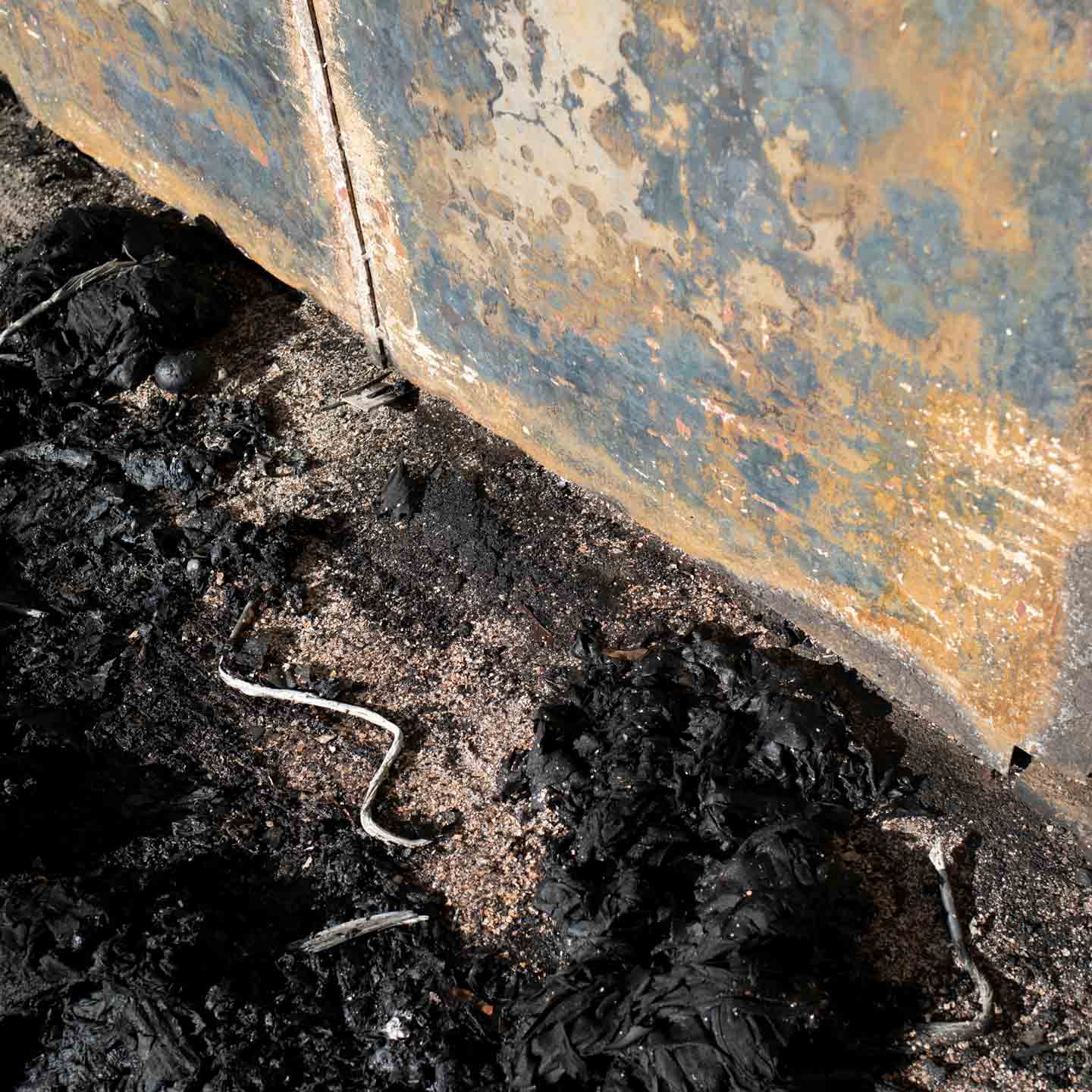 The remains of Miriam's tent after she accidentally burned it down. Nobody was injured. (Johanna Maria Fritz / Ostkreuz)

Berlin is a city that prides itself on a sense of civic solidarity, but Covid-19 has frayed that self-identity—anxiety about the virus has led to many complaints to authorities about homeless people. The people living in the factory felt this acutely, telling me that they were being treated like lepers, or worse, ignored—invisible. Just last week, after years of occupancy, the kebab factory was cleared out: The police came and told everyone to leave. Some have gone on to an open-air camp in Marzahn, far from the city center, others are making do on the streets. As Benjamin told me, the coronavirus has upended the fragile life they had built in the factory: “I want the old world back.” 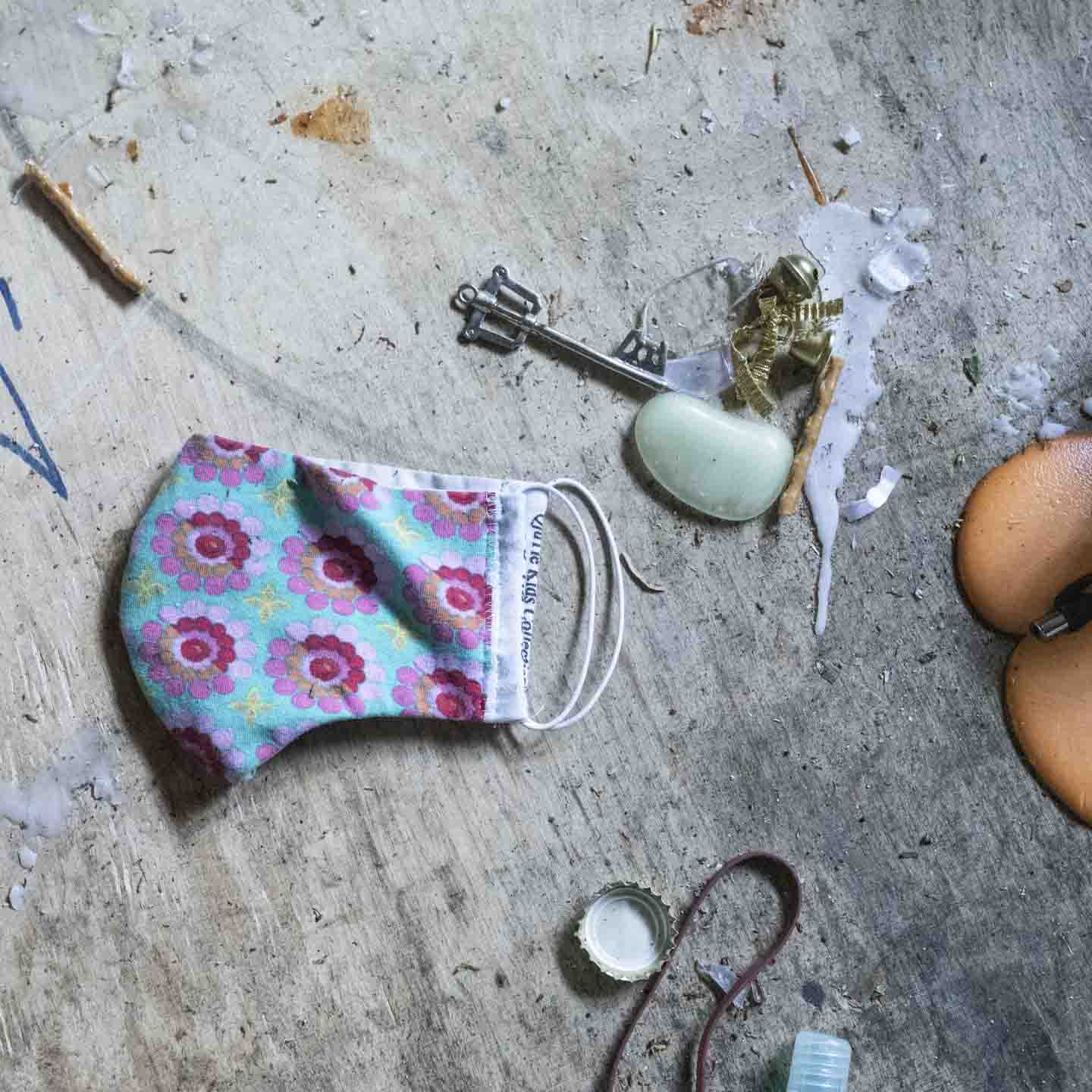