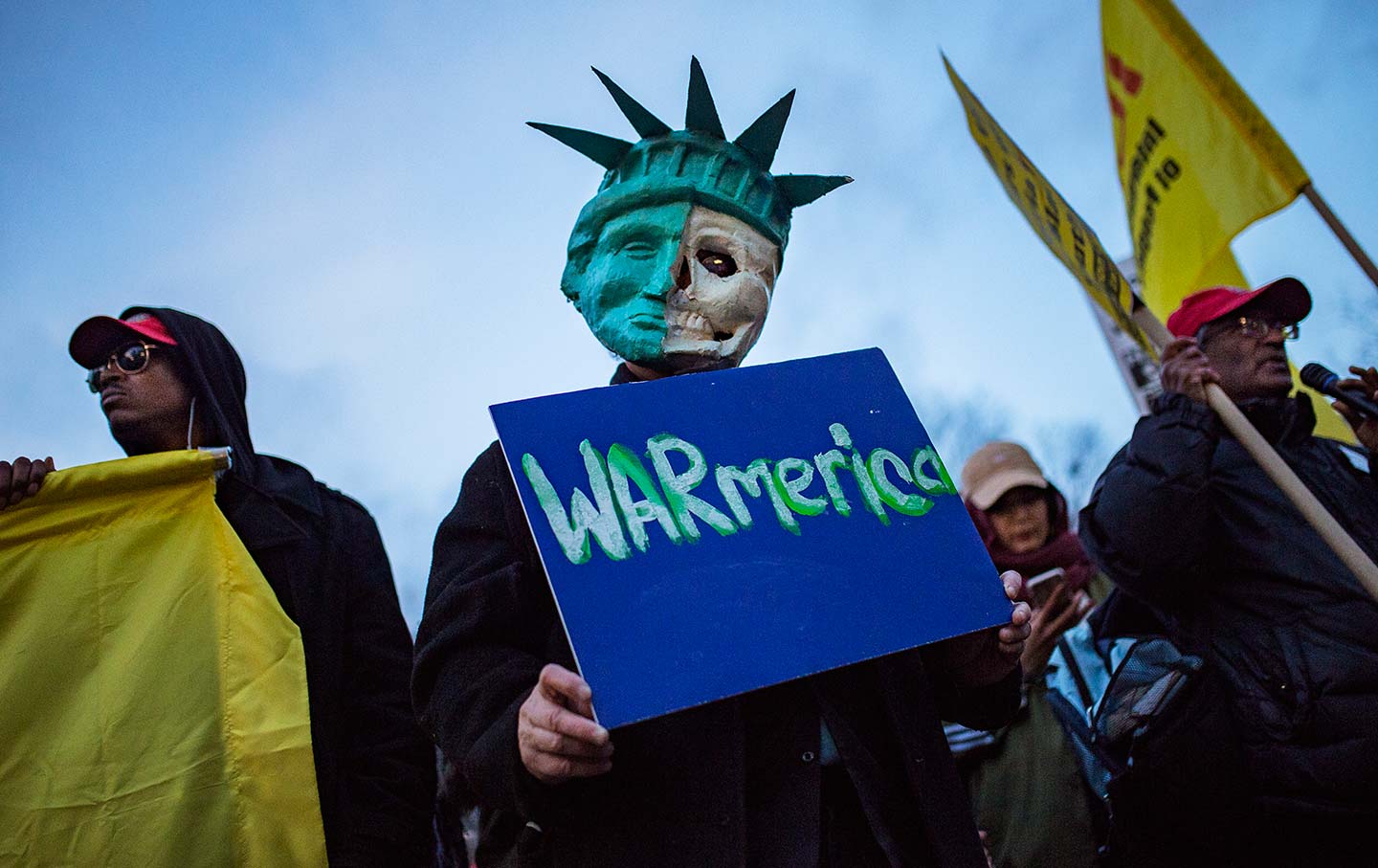 Protesters gather at a New York rally against the US missile strikes in Syria on April 7, 2017. (Andres Kudacki / AP Photo)

EDITOR’S NOTE: This article originally appeared at TomDispatch.com. To stay on top of important articles like these, sign up to receive the latest updates from TomDispatch.

My first question is simple enough: After 18-plus years of our forever wars, where are all the questions?

Almost two decades of failing American wars across a startlingly large part of the planet and I’d like to know, for instance, who’s been fired for them? Who’s been impeached? Who’s even paying attention?

I mean, if another great power had been so fruitlessly fighting a largely undeclared set of conflicts under the label of “the war on terror” for so long, if it had wasted trillions of taxpayer dollars with no end in sight and next to no one in that land was spending much time debating or discussing the matter, what would you think? If nothing else, you’d have a few questions about that, right?

Well, so many years later, I do have a few that continue to haunt me, even if I see them asked practically nowhere and, to my frustration, can’t really answer them myself, not to my satisfaction anyway. In fact, since 2001—with the exception of the months leading up to the invasion of Iraq when America’s streets suddenly filled with hundreds of thousands of demonstrators asking a range of questions (“How did USA’s oil get under Iraq’s sand?” was a typical protest sign of that moment)—our never-ending wars have seldom been questioned in this country. So think of what follows not as my thoughts on the war in question but on the war in questions.

The Age of Carnage

In October 2001, in response to the 9/11 attacks, the administration of President George W. Bush launched a bombing campaign not just against Al Qaeda, a relatively small group partially holed up in Afghanistan, but the Taliban, an Islamist outfit that controlled much of the country. It was a radical decision not just to target the modest-sized organization whose 19 hijackers, most of them Saudis, had taken out almost 3,000 Americans with a borrowed “air force” of commercial jets, but in the phrase of the moment to “liberate” Afghanistan. These days, who even remembers that, by then, Washington had already fought a CIA-directed, Saudi-backed (and partially financed) war against the Soviet Union in that country for a full decade (1979-1989)? To take on the Red Army then, Washington funded, armed, and supported extremist Islamist groups, some of which would still be fighting in Afghanistan (against us) in the 21st century.

In the context of that all-American war, a rich young Saudi, Osama bin Laden, would, of course, form Al Qaeda, or “the base.” In 1989, Washington watched as the mighty Red Army limped out of Afghanistan, the “bleeding wound” as its leader then called it. (Afghanistan wasn’t known as “the graveyard of empires” for nothing.) In less than two years, that second great power of the Cold War era would implode, an event that would be considered history’s ultimate victory by many in Washington. President Jimmy Carter’s national security adviser Zbigniew Brzezinski, the man who first committed the United States to its Afghan Wars, would, as last century ended, sum things up this way: “What is more important in world history? The Taliban or the collapse of the Soviet empire? Some agitated Moslems or the liberation of Central Europe and the end of the Cold War?”

Afghanistan itself would be left in ruins as Washington turned its attention elsewhere, while various local warlords fought it out and, in response, the extremist Taliban rose to power.

Now, let me jump ahead a few years. In 2019, US air power expended more munitions (bombs and missiles) on that country than at any time since figures began to be kept in 2006. Despite that, during the last months of 2019, the Taliban (and other militant groups) launched more attacks on US-and-NATO-trained-and-financed Afghan security forces than at any time since 2010 when (again) records began to be kept. And it tells you something about our American world that, though you could have found both those stories in the news if you were looking carefully, neither was considered worthy of major coverage, front-page headlines, or real attention. All these years later, it won’t surprise you to know that such ho-hum reporting is just par for the course. And when it comes to either of those two on-the-record realities, you certainly would be hard-pressed to find a serious editorial expression of outrage or much of anything else about them in the media.

At 18-plus years or, if you prefer to combine Washington’s two Afghan wars, 28-plus years, we’re talking about the longest American war in history. The Civil War lasted four years. The American part of World War II, another four. The Korean War less than four (though it never officially ended). The Vietnam War, from the moment the first significant contingent of US advisers arrived, 14, and from the moment the first major US troop contingents arrived, perhaps a decade. In the Trump era, as those air strikes rise, there has been a great deal of talk about possible “peace” and an American withdrawal from that country. Peace, however, has now seemingly come to be defined in Washington as a reduction of American forces from approximately 12,000 to about 8,500 (and that’s without counting either private military contractors or CIA personnel there).

Meanwhile, of course, the war on terror that began in Afghanistan now stretches from the Philippines across the Greater Middle East and deep into the heart of Africa. Worse yet, it still threatens to expand into a war of some sort with Iran—and that, mind you, is under the ministrations of an officially “anti-war” president who has nonetheless upped American military personnel in the Middle East to record levels in recent years.

Of course, this is a story that you undoubtedly know fairly well. Who, in a sense, doesn’t? But it’s also a story that, so many years and so much—to use a word once-favored by our president—“carnage” later, should raise an endless series of disturbing and unnerving questions here. And that it doesn’t, should raise questions in itself, shouldn’t it?

Still, in a country where opposition to endless war seems constantly to falter or fade out amid a media universe in which Donald Trump’s latest tweet can top any war news, it seems potentially useful to raise some of those questions—at least the ones that occur to me—and perhaps for you to do the same. Isn’t it time, after all, for Americans to ask a few questions about war, American-style, in what might be thought of as the post-9/11 age of carnage?

In any case, here are six of mine to which, as I said, I don’t really have the answers. Maybe you do.

So those are my six questions, the most obvious things that puzzle me about what may be the strangest aspect of this American world of ours, those never-ending wars and the system that goes with them. To begin to answer them, however, would mean beginning to think about ourselves and this country in a different way.

Perhaps much of this would only make sense if we were to start imagining ourselves or at least much of the leadership crew, that infamous “Blob,” in Washington, as so many war addicts. War—the failing variety—is evidently their drug of choice and not even our “anti-war” president can get off it. Think of forever war, then, as the opioid not of the masses but of the ruling classes.